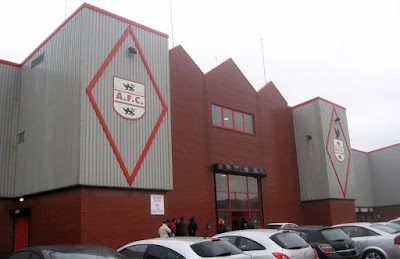 It was my intension that last month’s trip north to Raith Rovers was to be my last journey to Scotland until the spring. However it was hard to resist taking a gamble on the weather to book advance trains to Edinburgh and if I couldn’t bag another ground there’s always the back up plan of a day on the lash in one of my favourite cities.

The weather was rough in the West side of Scotland, but not match threatening, so I confidently headed up to Airdrie in North Lanarkshire. The town forms part of a municipality with Coatbridge in the former district known as the Monklands, situated approximately 12 miles east of Glasgow.

The Airdrie name is believed to have originated from Gaelic dialect; An Àrd Ruigh meaning a level height or high pastures land, or possibly from An Àrd Àirighe denoting a sheiling or wayside town 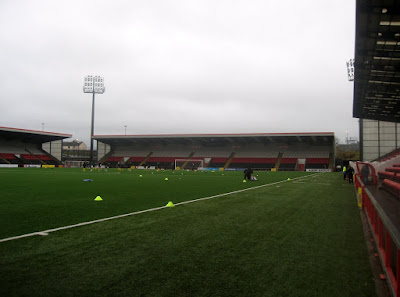 Airdrie United formed in 2002, born out of a collapse of one club and the takeover of another. Airdieonians with debts of almost £3m went out of business after finished runners-up in the Scottish First Division in the 2001–02 season, their vacancy in the SFL taking up by Gretna, a non-league side playing in the Northern Premier League in England.

Airdieonians fan and accountant Jim Ballantyne led a consortium to gain entry to the Scottish League with a newly formed club out of the ashes of “The Diamonds” with a buy-out of the ailing Second Division side Clydebank, to take over their League place and relocated to North Lanarkshire.

The new club kept the traditional Airdrieonians colours of all white with a wraparound red diamond and the name changed to Airdrie United. Although the club are officially a continuation of Clydebank, they are mainly recognised as a reincarnation of Airdrieonians, with Clydebank having been reformed by the UCS supporters group, plying their trade in the West Region of the Scottish Junior League.

Airdrieonians formed in 1878 and played at the original Broomfield Park from 1892. My own link to Airdrie, or should I say, the Tyneside connection to the club comes in the way of a famous son of North Lanarkshire - the legendary Hughie Gallacher.

After signing from Queen of the South in 1921, Hughie made his name at Airdrieonians, earning the first of his 20 Scottish caps in 1924 going on to score 23 international goals. During his four years at Broomfield he scored 91 goals in 111 appearances before heading south to St James Park in a 6,500 deal in December 1925.

The wee man became one of the earliest legendary Newcastle number 9s, a key member of the 1926-27 title winning team with a remarkable 133 career goals in 160 matches before a big money move to Chelsea. Such was his popularity at United that when he return with the Blues a record attendance of 68,386 was set, with several thousand locked outside. Gallacher scored 81 goals in 144 games and was Chelsea’s top scorer in each of his four seasons at Stamford Bridge.

Hughie went on to play at Derby County, Notts County and Grimsby before returning to Tyneside in 1938 at Fourth Division Gateshead. A delighted and emotional Gallacher was quoted as saying “It’s grand to be back on Tyneside, my heart has been here ever since I left United eight years ago. I intend to spend the rest of my life with my adopted folk in Gateshead."

Crowds at Gateshead’s Redheugh Park soared to 20,000 as he hit 18 league goals for the club before retiring from football due to the outbreak of World War 2. Hughie continued to live in Gateshead until his sad demise and tragic suicide in 1957, taking his life just a short walk from my own home in Gateshead, stepping in front of an oncoming express train on the London-Edinburgh line at Low Fell. 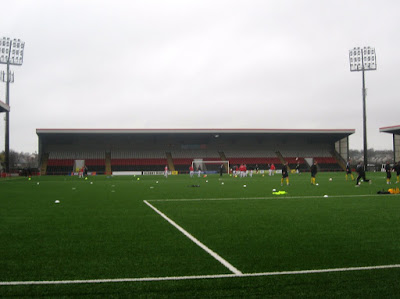 Broomfield Park was sold to supermarket chain Safeway for £5.5m in May 1994. The club’s intention was to build a new, 10,000 all-seated stadium to SPL standard in readiness of gaining promotion from the First Division. However acquiring planning permission proved difficult as the club struggled to find an appropriate site, which meant Airdrie had to groundshare with Clyde at Broadwood Stadium in Cumbernauld for four seasons.

Once a viable site was found, building work on the Shyberry Excelsior Stadium (as it was originally called) was completed in time for the start of the 1998-99 season. The stadium is made up of four separate single tier stands with open corners. The Jack Dalziel Stand is the largest, having a row of executive boxes at the top and decked out in red seats with white diamonds and AFC (What about the ‘U’?) picked out in black. The Perspex dugouts are at each side of the tunnel and the stand also houses the ticket office, club shop, conference and banqueting facilities and a public bar.

Opposite is the East Stand which is closed to the public and is only used by the press. I was one of the eight in the spacious press box, made up of six writers and two on the TV gantry section. The stand is similar in height and appearance as the North and South Stands behind each goal, the seats are horizontally colour banded into white red and black.

The ground also has electric scoreboards behind each goal, four prominent corner floodlights and a new 3G artificial pitch which made its debut in August 2010.

Although only one stand was available to the paying public on this visit, overall New Broomfield holds 10,171 with a record attendance of 9,613 coming in the 2005 Scottish Challenge Cup Final between Hamilton Academicals and St. Mirren.

The biggest gate for an Airdrieonians match was 8,762 against Celtic in a Scottish League Cup tie in August 1998, as for Airdrie United it’s currently 5,924, set during the Scottish Cup 3rd round against derby rivals Motherwell in January 2007. 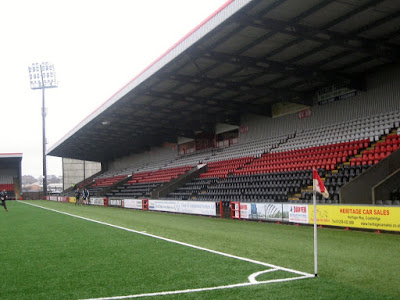 I arrived in a sunny but windy Edinburgh at 1130am. Predictably I spent my brief time in the Scottish capital visiting a couple of unchartered JDW pubs, namely The Playfair in the Omi Centre and the Alexandra Graham Bell on George Street, before taking the 1248 train west towards Helensburgh Central.

The journey to Airdrie takes just over 45 minutes. The closer I got to Lanarkshire the darker and wetter it became, but having seen the weather forecast I was well prepared, well wrapped and water proofed. On arrival I completed a ‘Spoons hat trick in Airdrie, calling into The Robert Hamilton before taking the 20 minute walk to the stadium in the piss-istent rainfall.

I entered the press area via a gate at the Main Stand, the steward handed me a programme and informed me I had to walk around the pitch to the opposite stand, plus if I needed a drink or something to eat I had to walk back.

This wasn’t a convenience, in fact it was bloody great news as I took the longer route around the perimeter, able to freely take pictures with no problems whatsoever and without any hassle from the stewards, not like those mardy jobsworth tits that I experienced at Clyde. 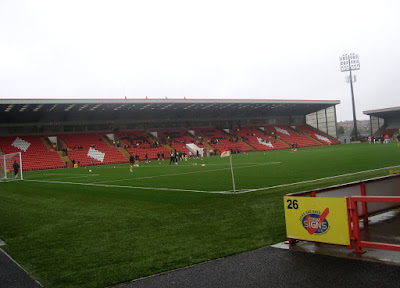 I always enjoy attending games in Scotland but over the last few years the standard of football in the SPL and SFL had been, if I’m brutally honest, piss poor! I’ve been long overdue a great game, and I got it, the game had plenty of goals with both sides fully committed, giving their all in continuous rain and a swirly wind.

The game got off to a lively start; in Arbroath’s very first attack they were awarded a free kick on the edge of the box. Gavin Swankie stepped up and from 20 yards he curled his shot inside the keeper’s right hand post to give the visitors a 57 second lead (according to my digital watch)

Airdrie equalised in the 5th minute, a cross by McClaren was handled in the box by Baxter and from the spot kick skipper Paul Lovering smashed the penalty in off the underside of the crossbar.

Arbroath regained the lead in the same fashion just before half time. This time a Swankie cross was handled by Green and Steve Doris made no mistake with his spot kick, then after the break The Smokies looked to have bagged the points when Swankie again was on hand to tee up Falkingham to fire home on 56 minutes.

Diamonds top scorer Ryan Donnelly rescued an unlikely point with a headed brace in a two minute spell, getting on the end of a Boyle cross on 69 minutes, then a minute later he was left unmarked to nod home from close range to take his goal tally to 18 goals in 19 games this season.

Both teams had chances to win it, the best effort falling to Donnelly who was denied a hat-trick with a tremendous tip over by keeper Hill, but overall neither side deserved to lose, a draw being the fairest result.

Full marks to both teams for producing a cracking game in horrendous conditions. I felt my planned arrival to Airdrie came 7 days too late after they pulled of a record 11-0 win in the Scottish Cup last week, but I’m quite happy to settle for a 6 goal thriller and an enjoyable but soggy day north of the border. 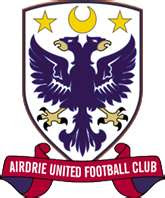