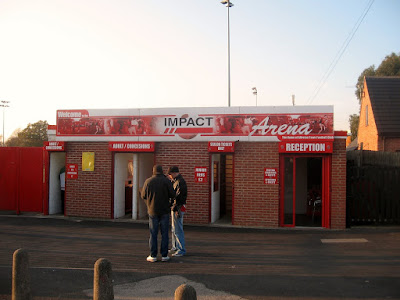 This week I was back on the road with the Heed Army for a relatively short trip (compared with what I’m used to) to Alfreton Town to tick off one of the three remaining Conference grounds I need to complete Blighty’s top 116 clubs.
Alfreton is a town and civil parish in the Amber Valley, neighbouring the districts of Bolsover and North East Derbyshire. The town was formerly a Norman Manor and later an Urban District.
Legend has it, that Alfreton takes its name from Alfred the Great, who drove the Danes from settlements in this area of the country and overhauled much of the damage. There’s also evidence that a settlement existed here in Saxon times. 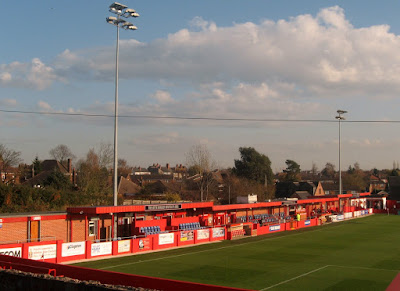 Alfreton Town formed in 1959 following the merger of Alfreton Miners Welfare and Alfreton United. The club originally playing in the Central Alliance North Division One, before joining the Midland Counties League from 1961 - winning three league titles during the 1970’s.
Town became founder members of the Northern Counties East League in 1982, becoming league champions in 1987 thus winning promotion to the Northern Premier League.
Back to back relegations at the end of the 1990s saw the club back in the Northern Counties East League. However good fortune returned, two promotion seasons and a 4th place finish saw the Reds placed in the Conference North when the football pyramid was reformed in 2004.
Last season the club had their most successful season in winning the Conference North title with a ten point margin over nearest rivals AFC Telford to take their place at the top table of non-league football. 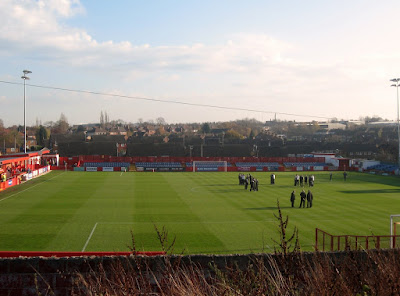 The local council provided a ground for the newly formed club on North Street, which was originally called the Town Ground. Within a year a covered banked terrace was built on the Welfare side, followed by seating for 180 and a small covered stand at the Alma Street end in 1963. The ground’s early years witnessed a record crowd when 5,023 saw a Central Midland league clash with Derbyshire neighbours Matlock Town in 1960.
In the early ‘70s the original stand was replaced with a covered terrace and seats combination, followed by floodlights and a new dressing room building, which was later renovated with a players lounge bar and directors box.
More improvements were made as the club progressed with the most significant change coming in 1994 with a new Main Stand. The stand runs pitch length and is split up into different sections, having two rows of blue seats and press box in the centre, the Tommie Bradley Terrace next to the club shop and at the opposite end of the stand is the Red Bar and the Lottie Bradley Hospitality Area.
The main turnstile entrance is in the corner off Bentley Close, where you’re met by the refreshment bar and club shop which has a huge selection of programmes and pin badges which is well worth visiting.

Opposite is the Tom McRoy Stand named after “Mr Alfreton Town” himself who was responsible for the amalgamation of the new club 52 years ago and is still going strong, celebrating his 92nd birthday this year.
The stand is two-thirds covered with a scaffold assisted TV gantry on the roof, with half a dozen rows of blue flip seats which continue around to the Bentley Close end behind the goal. The seats were purchased from Leicester City’s old Filbert Street ground at a bargain price of £1.50 per pew. The Bentley Close has only four rows of seats which were bolted onto the terrace in 2003 and there are plans to add cover in the near future, as well as moving the changing rooms and adding other facilities around the ground.
At the top end on the Alma Street side is a small steep terrace known as the 'Tin End' which is split into three separate sections. This has a small covered area in the centre section and the back walls are painted red.

In 2004 a new £70,000 floodlighting system was installed courtesy a £45,000 award from the Football Stadia Improvements scheme and several wheelchair access ramps for spectator points for the disabled. The Impact Arena as it’s now officially known* has a capacity of 3,600 with 1,500 seats.
(* as a regular at St James Park for 37 of its 119 years history, I prefer to call grounds by their traditional name) 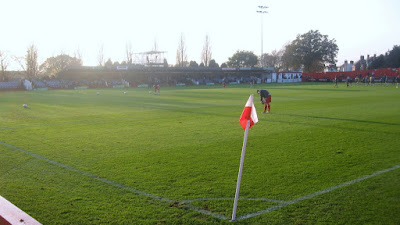 On current form I expected a convincing away win, confidently predicting a 3-1 victory for Gateshead, but if I was any good at this prediction malarkey I would be rich enough to pack in work and spend my leisure time exploring the delights of stadiums around the continent.
Alfreton didn’t look like a side that’s struggling at the wrong end of the table as they dominated early on. Kris Gate was on hand to twice to make goal line clearances and Jak Alnwick tipped over a free kick from Anthony Church as the Reds bossed the first half.
The opening goal duly arrived on 37 minutes with probably the best goal I’ve seen so far this season. The ball was played into the right flank to Jake Moult, who’s back heel flick teed up Paul Clayton who hit a bullet first time shot which found the postage stamp position in the frame of the goal.
The Tynesiders improved after the interval, the Reds invited the pressure with keeper Joe Day denying Gate and Cummins, with the Heed number 11 also going close with a near post header.
The equaliser came on 68 minutes from Chris Moore, Brittain played a square ball to the edge of the box and the substitute fired home from 20 yards.
In the closing stages the hosts should have won it as the Heed’s desperate defending saw goalmouth scrambles and goal line clearances, the best chance saw Marwood on hand to clear off the line from Clayton and a Leigh Frank shot just whistled over the crossbar which would have been the third cracking goal of the afternoon.
The Town fans post match view was that this was the best home performance of the season. The luxury of having almost a full squad to choose from making the difference and if they can produce performances of a similar ilk then they have every chance of surviving this season. 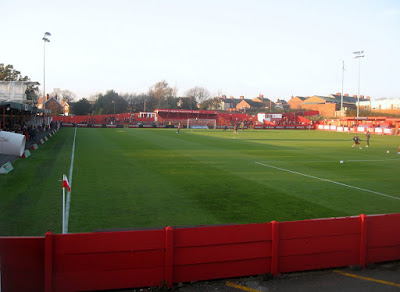 A travelling distance of just 146 miles from the Civic Centre to the ground meant a 10am departure and an arrival time of 1.30, so this gave me amble time to check out a few of the local hostelries. I had arranged to meet Squad #108 John Robinson his brother Neil and Squad#194 Keith Arthur when I arrived, but their replacement bus service from Derby was caught in heavy traffic so unfortunately they didn’t arrive till just before 2.30pm.
I did do a solo run to the local Wetherspoons – Waggon & Horses, followed by the King Alfred where I met a drunken exile Geordie from Birtley who had lived in Alfreton for the last 10 years. He was positive that he knew me from his days working in Gateshead, however he may have been mistaking as he was really really pished!
My last pre-match pub was The Victoria where most of the Heed Army had taking root and this was where I finally met John (ground no.509 today) and Keith (ground no.381) for the first time, which brings my 100FgC handshake total to 53/198.
Its always good to meet up and have a bit crack with some of the squad, also I was made welcome by the staff working at the ground who were very friendly, so overall a it proved a very good trip and a canny day out. 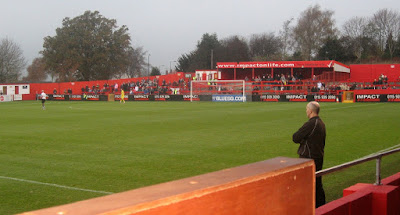 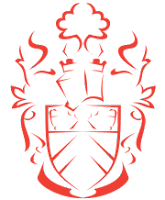 Yes £13 is very good. Congratulations on the 92, Shaun. And soon the 116? Now that's impressive. I've had Alfreton on my radar for a while now, it looks like a good ground.
My own 92 attempt is going backwards. The ones I have left are mostly a long way away and it's getting the time and money etc. One day! For now I'm enjoying my trips to Wales - doing a 3rd Round Cup game next week at FC Cefn, hoping to see a giant killing.