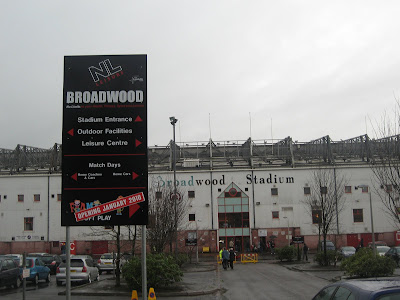 Clyde FC were founded in 1877 and hail from the Glasgow district of Rutherglen on the banks of the River Clyde .
After the club’s formation their first home was at Barrowfields Park on the edge of Bridgeton, before moving to Shawfield in 1898.
Shawfield also played host to athletics, boxing and from 1932 became a Greyhound Stadium, the Greyhound Racing Association Ltd later becoming landowners.
When the owners decided to sell the land for redevelopment in 1986 the club’s search for a new home proved difficult, the club having to settle on a controversial ground share with local rivals Partick Thistle, the first cohabits in Scottish football which lasted for five years.

In 1990 “The Bully Wee” accepted an approach by the Cumbernauld Development Corporation to relocated to one of Scotland’s five new towns, and one of the largest townships in the country without a senior football club.
Cumbernauld name derives from the Scots Gaelic Cumar-nan-Alt, meaning 'the Meeting of the Waters' due to the proximity of tributaries of the rivers Forth and Clyde which lead to the major cities of Edinburgh and Glasgow.
The new town was created in 1956 as a population overspill from Glasgow. Historically Cumbernauld originates from Roman times, with a settlement near the Antonine Wall, the wall being the most northerly boundary of the Roman Empire. 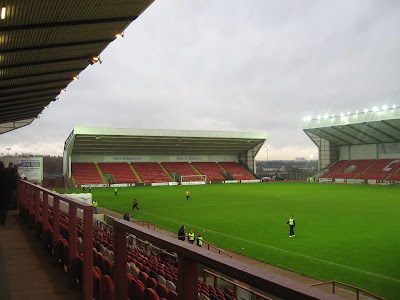 Clyde ground shared again from 1991, this time with Hamilton Academicals while the new stadium was under construction, this nomadic period gave the Clyde supporters the self titled handle of the “Gypsy Army”
Broadwood Stadium opened in 1994 and is the highest ground above sea level in Scotland. Their first fixture on February 5th was coincidently against their most recent landlords, a 2-0 defeat against the Accies in front of a crowd of 5,356.
When originally constructed, Broadwood had only two stands designed by Percy-Johnson and built by the Walker Group at a cost of £6m.
The Main Stand and West Stand both have a single tie of red seats, the Main Stand slightly larger having hospitality suites, while the West Stand has an electric scoreboard and Clyde OKI picked out in white seats, although on first glance I thought it said CLYDE OK.
The open ends to the north and south made it one of the country’s coldest grounds giving it the nickname ‘Ice Station Broadwood, then in 1996 the South Stand was added at a cost of £1.7m, matching the other stands in design and size.
The vacant north end has a leisure centre, protected from wayward shots by a metal mesh wall and metal slats over the windows.
The current capacity stands at just over 8,000 with the biggest attendance being the sell out crowd which witnessed the Scottish Cup victory over Celtic in January 2006. 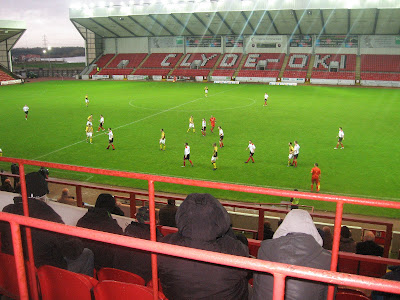 A great family day out in Glasgow, the Smudger’s making full use of our ’Friends & Family’ railcard, the four of us travelling direct to Glasgow for a total return price of only £28.80.
After heading straight to the pub for a few drinks (Just to get out of the rain..Eddy) I headed back to the train station to make the short journey to Croy.
Thanks to the Clyde supporters website Broadwood Ice Station, I managed to navigate the 20 minute walk from the station to the ground in the driving rain without any problems, arrived at Broadwood Stadium at 2.30pm.
I was looking forward to the prospect of a mouth watering encounter, hosts Clyde sitting at the foot of the Scottish 2nd Division again East Fife, one place above them in ninth.
In the space of the opening five minutes, I could tell the home supporters were in for a frustrating afternoon. East Fife looked sharper and dangerous going forward and it was no surprise when they took an early lead. Paul McManus picked up a good through ball, before turning the defender and although he was forced wide, he hit a fierce shot beyond the keepers far post.
With only ten minutes gone there were cries of “Brown must go” from the restless natives, as their team failed to make any impression on the game. East Fife continued to press forward with McManus almost doubled the lead just before half time, his half volley produced a good save from Clyde ’keeper Reidford.

In the interval I had a wander around the stand, taking a few pictures from different angles before settling down to watch the second half. As I headed back towards my seat at the top end of the stand, I was stopped by a jobs worth steward, looking a right dickhead wearing a furry Cossack hat which didn’t embellish his lime green hi-vis jacket.
“Can I have a word with you sir” he asked before coming up with the cracking follow up line of “Your behaviour has been erratic!” He mentioned that they’d been watching me and wanted to know why I was taking pictures of people! What a Tit! I obviously explain who, why and what I’m about, before he gave me permission to continue watching the match. I returned to my seat feeling like a naughty schoolboy being told off for running in the corridors. With all supporters making use of only one stand and a sparse crowd of 635, I suppose they needed something to do and someone to pick on to justify their wages. 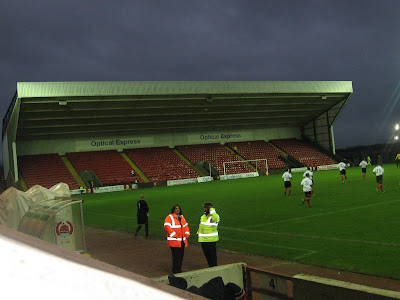 Clyde started the second half much brighter and were giving an opportunity to get back into the game when winning a penalty on 54 minutes. A cross from the right saw a pull on Howarth’s arm, although there didn’t seem to be much of a challenge.
Sawyers dispatched the penalty, which was greeted with a blast of the Gorillaz ‘Dare’ on the PA which was quite a fitting song, considering the referee dared to award such a soft penalty.
The goal failed to revitalise Clyde instead it was the men from Methill who went on to take the three points. McManus looked dangerous cutting inside and tested the ‘keeper with a fierce shot, then within a minute a good cross from Cargill found the Fifers number nine getting in front of Reidford to stab the ball home.
East Fife wrapped up proceedings ten minutes from time with a great individual goal from substitute Bobby Linn, dancing his way through a static defence before placing his shot into the far corner.

This lead to more angry protests from the Clyde supporters, the chants of “Brown must go” now much louder, their outrage paid off, getting their wish with the announcement that manager John Brown had left his position as manager after the game.
From a neutral’s point of view I understand the fans vitriol, the performance was terrible and like I’ve already mentioned I knew within the opening minutes that Clyde weren’t good enough to beat a side only two points above them in the league.
The torrent of abusive the manager had to injure from the supporters gave him no option but go. The remarks hurled in his direction were quite abusive and obviously everyone sitting in the stand got to here every word. The language used was very strong so I don’t want to replicate those remarks within this post.
The funny thing is though, the stewards didn’t bother having a word with anyone, telling them to calm down and curb the language, if fact they probably didn’t notice. You see their attention was drawn towards someone else, a Geordie lad sitting quietly alone in the stand, all eyes on him throughout the game, ready to pounce on him if he dared to continue with his “erratic behaviour”

Erratic? You sir? No Sir Not you Sir!

Aye! Can tell from the photo that yr bein scoped by the Cosack and his pal. I think as long as yr shooting during the game, they don't mind. Sadly, there are less folk at Broadwood than at some Junior matches, but because it's all seated, they don't like people doing anything other than sitting watching the game, going to the toilet or buying food. They certainly get most confused and very upset if you start walking about and taking snaps, even at half time.

For what it's worth, I'm not a fan of Broadwood. Windswept and interesting maybe, but it's the last place any visiting fan would want to go on a cold winter afternoon/evening. Ha! I'm just a bitter Partick Thistle fan and I've never seen us win there.... :)

That stand at the end of the ground is virtually never used and must constitute the most expensive windbreak ever constructed. Sad to see Clyde in their current malaise, but I reckon John McCormack will do ok by them. They'll soon be back in business on the park.

I had originally planned to visit Partick Thistle on this day, but their match with Inverness CT was postponed due to the Alba Cup.

The highest football league ground in Scotland is Airdrie's stadium not Broadwood.