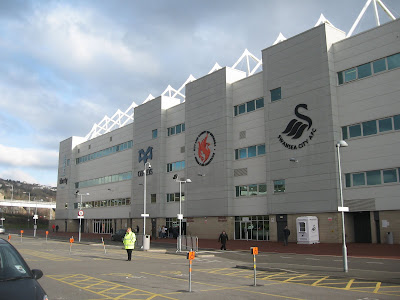 Swansea is a city on the south-west coast of Wales in West Glamorgan on the banks of the River Tawe, known locally as Abertawe - “mouth of the Tawe”
Swansea geographical location saw it thrive during the industrial revolution, the port exported coal across to the south-west of England and specialised in copper smelting, as smelting works opened along the Tawe Valley.
The town expanded during the 18th and 19th centuries as the Smelters were established producing arsenic, tin and zinc to create tinplate and pottery, which made the town a big player in the world copper industry, which termed Swansea the name “Copperopolis".
Swansea Town formed in 1912 and joined the Southern League Second Division, winning promotion prior to the war which gained admission into the expansion of the Football League, becoming founder members of Division Three South.
Swansea gained city status in 1969 to mark the enthronement of Prince Charles as the Prince of Wales, so the club became Swansea City in February the following year. 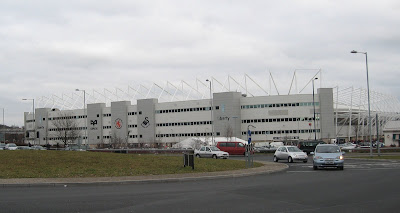 Having played at the Vetch Field for 93 years, Swansea City moved into a new purpose built stadium on the outskirts of the town on the west side of the River Tawe.
The stadium was built upon the site of the former Morfa Athletics Stadium and during construction went under the working name of White Rock, named of the copper works which was located on the site and opened way back in 1737.
White Rock would have been a unique and cool name for a football ground, however the stadium became available for sponsorship naming rights, which went to local developers Liberty Property, so it became “Stadiwm Liberty” on 18th October 2005.
The stadium was designed by Gateshead based TTH Architects (I’m their postman. Morning!)and built by Interserve at a total cost of £27m.
It wasn’t just the Vetch Field that needed replacing, local rugby club All Whites played at the St. Helen’s ground which was also well past its sell by date.
All Whites merged with Neath RFC to form Ospreys, and along with Swansea City the city council had the ideal site in Landore a few miles from the city centre to accommodate both clubs.
The 20,500 capacity multi-use stadium was funded by the nearby retail park built on the east side of the river. Work commenced in Autumn 2003 with the opening game played on 23rd July 2005 between Swansea and Fulham.
The stadium has four two tier stands all equal in size with a much larger top tier. The West Stand is slightly bigger having executive boxes at the back running full length of the stand. The seats are decked out in black with triangular shapes and the name of the ground and home teams picked out in white.
The stadium benefits from partial transparent roofing which produces more natural light and has electric scoreboards on top of the North and South Stands. 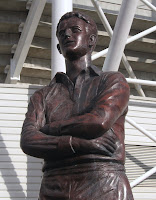 Outside the stadium in the south-west corner stands a statue of Ivor Allchurch MBE.
“Swansea’s Golden Boy’ wasn’t just a legend for The Jacks but was also a great favourite on Tyneside. Ivor signed for Swansea Town in 1947 scoring 124 goals in 327 appearances before a big money move to Newcastle United in 1958. In four seasons Ivor notched 51 goals in 154 starts before returning to South Wales to Cardiff City before going back home to Swansea in 1965.
Allchurch scored a club record 160 goals for Swansea and with 68 Welsh caps once held the record appearances for his country. Ivor was a true gentleman on the field and never the type of player to lose his temper, a gifted inside forward who could play with both feet and was renouned for his pinpoint passing and his ability to score from distance. A true football legend and the golden boy of Swansea and Wales.


With an unbeaten league run of 15 games coming to an abrupt end at Pride Park last Tuesday, this game took on a much greater significance for Newcastle. It was expected that the players would show a positive reaction to the gubbing off Derby County with a good performance and result at the Liberty Stadium.
Well at least the result was a good one, as the overall performance was very poor and the Toon were lucky and rather fortunate to share the points with an energetic and well organised Swansea City side.
City looked up for the game from the start, applying early pressure and going close with a well worked free kick from Orlandi. United’s best effort came after half an hour when Nolan should have done better with a close range header, but overall the Jacks were the better side and at the break I personally would have settled for a point.
In the second half the Swans went close with two efforts from Dyer but eventually took the lead on 56 minutes. A Pratley cross was dummied by Dyer which allowed Cotterill plenty of space and time to cut inside and pick his spot giving Harper no chance.
Williams then went close with a header but the best chance fell to Pintado who could have secured the points, missing his kick from close range with only six minutes remaining.
Three minutes later Newcastle levelled. Substitute Leon Best produced a great cross which was met at the back post by Andy Carroll with a powerful header. A goal which left me and the rest of the Toon Army both stunned and yet relieved to be able to make the long journey home with a point, which wasn’t deserved, but may prove to be a crucial one by the end of the season. 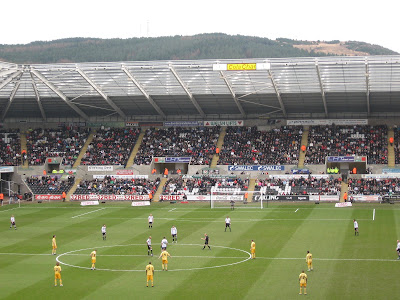 Following on from Cardiff and Plymouth this is the final part of my far flung Championship grounds trilogy. The final episode saw the earliest departure time yet - 3.30am, as Sky Sports decided to broadcast the game with a 12.45 k.o. to go up against ITV’s coverage of the FA Cup.
With the game kicking off early I thought I wouldn’t have much precious time in Swansea, to do the things I needed to while visiting this corner of South Wales.
I needn’t have worried as we arrived in good time at around 9.30am, giving me plenty of time to tick off a couple of pubs (your reader should know which ones..Eddy) and pay homage to the Vetch Field.
As is always the case when following NUFC away, I was with Ian Patrick and his son Lee, Ian doing his usual fantastic performance behind the wheel, even though he nearly dropped off a couple of times, myself and Lee took turns at going shotgun to keep him awake during the 700 mile round trip.
I decided we should stay well away from the M4 with the Rugby Union international in Cardiff between Wales and Scotland taking play at 2pm. So I navigated an alternative route, crossing the border at Monmouth and travelling on the A40 towards Abergavenny and through the valley’s down the A465 towards Merthyr then out at the bottom across the M4 into Swansea.
This was a much better and quicker way to South Wales, the roads were quiet and I didn’t see any other football fans on route, meaning we made good time heading back north, arriving home at quarter to nine.
We found the Swansea folk very friendly making our short stay in the city very enjoyable. I’m pleased to complete this ground trilogy and special thanks to 100FgC #2 for making the three match days enjoyable and getting us safely from A to B and back again, even though it meant getting up in the middle of the night and having to suffer sleep depravation, although overall it's been well worth it and a small sacrifice to pay to tick off these new grounds. 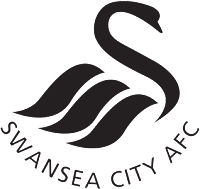 Ground no.242 Liberty Stadium - Matchday Web album (22 pictures including 9 from the Vetch)

Glad you enjoyed your first visit to my hometown!

I am a bit old school and miss the Vetch Field though!

Graeme will put the kettle on next time your in...

All the boys at TTH Architects