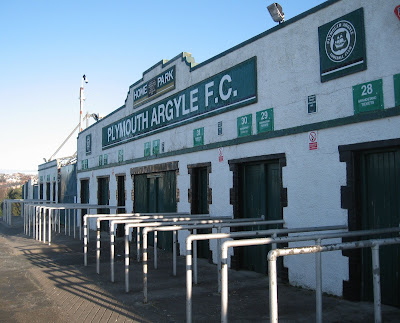 Plymouth is a city in Devon in the South-West of England, between the mouths of the rivers Plym and Tamar which flow into the natural harbour of Plymouth Sound.
Plymouth is renowned for its sea port. The Pilgrim Fathers set off for the New World in 1620 and established Plymouth Colony, the second English settlement in America.
The port thrived during the Industrial Revolution, building Royal Navy ships and importing goods and passengers to the States.
Famous Plymothians include nautical traders Sir John Hawkins and of course Sir Francis Drake. According to legend Drake insisted on finishing his game of bowls on the Hoe before going into battle with the Spanish Armada, in a similar way that I insist on finishing my pint before going to the match!
The city now has a population of a quarter of a million, which makes it the biggest city in the country to have never played host to the top flight of English football. 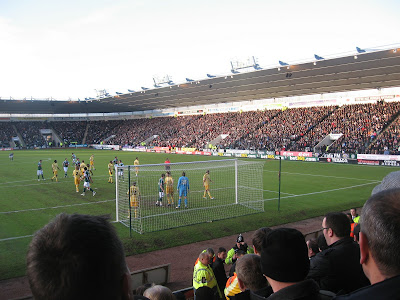 Home Park was originally home to rugby, where local clubs Plymouth Albion and later Devonport played during the 1890‘s. The latter club departed due to a rent dispute which left the ground vacant for three years.
In 1901 the lease was taking over by the long established Argyle Athletics Club, the ground at the time being an oval shaped bowl with a cinder track and the surrounding land made up of farmland and allotments. The ground had two structures, a main stand and a open corner west terrace on the Popular Side.
The new owners staged their first event, an athletics meeting in 1901, however leaseholder Clarence Spooner was keen to stage football as Devon lacked a senior football club. A series of successful trial matches followed which attracted healthy attendances and convinced Argyle A.C. to focus on professional football.
Plymouth Argyle FC made their competitive bow in the Southern League against Northampton Town on the 5th September 1903 in front of a crowd of 4,438.

.
The Main Stand was originally a wooden structure with a centrally positioned gable with a capacity of 2,000. In 1930, ten years after joining the Football League the stand was replaced with a new full length grandstand costing £11,000.
The close proximity to the Plymouth naval base caused damage to the ground during the Second World War, the pitch was badly covered with bomb craters and worse still the grandstand was destroyed by explosives and inflammable materials.
The stand was replaced with temporary uncovered seating and a wooden pavilion was built in the corner of the pitch for the directors, which is nowadays used as a PA box.
The current Main Stand was built in 1952 with floodlight switched on in October the following year for a friendly with Exeter City.
The Leitch inspired stand runs pitch length with a green con-iron roof and windshields, seating is provided with the classic old wooden flip chairs.
In 1969-70 seats were added at the back of the lower tier, known as the Mayflower Stand which took the seating capacity to 4,100 and at the time the overall capacity to 40,000.

.
Cover was first added to the Devonport End terrace in 1930 with funds generated from the supporters club and extended towards the Grandstand two years later. For safety reasons the roof was taking down in 1980 and replaced four years later, while the Lyndhurst Side terrace was covered in 1965
In 2001 work began on both these stands as well as the open Barn Park terrace and corners, which was completed in February the following year. The three sides form a horseshoe single tiered stand, decked out in dark green with a simple white trim behind each goal and PAFC along the Lyndhurst Stand.
The Field of Greens now has temporary seats which replaced the Main Stand terracing in 2007 which run up to a row of executive boxes. There is a small enclosure in the corner with floodlights now perched on top of the Lyndhurst Stand and thin pylon poles at each side of the Main Stand.

.
Home Park was recently announced as a host stadium for England's 2018/2022 World Cup bid. The stadium will be redeveloped from 19,500 into a 40,000 capacity stadium, which will see the current grandstand replaced at the end of next season. 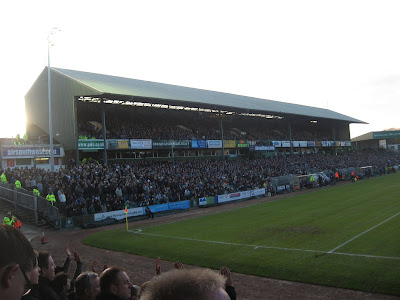 A disappointing game to start off the new year, played on a bobbly cut up pitch with both sides lacking creativity and as I predicted after only 20 minutes; “This game’s got nowts each written all over it”
It was Newcastle who had the two best chances, both coming at the end of each half. A Guthrie shot bringing out a flying save from Romain Larrieu just before half time, then as Newcastle rallied for a late winner, a Nicky Butt half volley was tipped on to the crossbar, the Argyle keeper producing another fine save.
Plymouth made only the one change after their convincing win over Reading early in the week, while United made seven, amongst those were Ryan Taylor and Fabrice Pancrate who didn’t produce a decent cross between them all afternoon.
Both sides will be disappointed with the draw, especially The Pilgrims who will have to endure the long trip north for a midweek fixture in ten days time.

Everyone knows that the furthest point between two English football league clubs is the 408 miles between St. James Park and Home Park, so how is such long time consuming trip navigated? 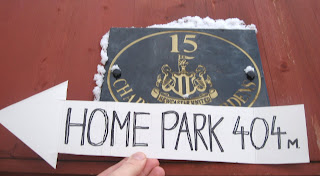 From Home to Home Park
Planes? - We tried to book planes to Exeter, we were quoted £82 which sounded fine. I went online to book the flights, however they forgot to mention the T.P.T.- the taking the piss tax - which meant the total fair was £151, which is too much expense so close to Xmas.
Trains? Either going cross country or via London, the journey was too long and again too expensive and wasn’t worth it.
Luxury coach travel? - Yes, I was up for that, but Ian wasn’t. He didn’t like the idea of being stuck on a coach for that length of time with the added difficulty of trying to get comfortable and catch up on some much needed sleep.
So that left us with just one option - the car. Ian was keen to drive us there after travelling by road to the likes of Portsmouth and Southampton. On one occasion he drove us to Exeter and back in one day for an evening kick off and that was just for a bliddy friendly!
So taking inspiration from the Aviva advert starring Paul Whitehouse(Green Arrrmee! …Eddy) it was Plymouth away today - “And that’s a long old poke init!”
I was looking forward to visiting Home Park but obviously apprehensive about the journey, but the trip went smoothly. I text radio station TalkSport and at 8.20am Mark Saggers and my old mucker Micky Quinn sounded quite impressed as they discussed how Shaunee Boy, Ian and Lee had departed at 3.50am on route by car to Plymouth.
After a couple of pitstops we were eventually greeted by bright sunshine with just a touch of ground frost as we pulled into the Home Park car park at 10.15am.
I took a look around the outside of the stadium and visited the club shop before gaining access inside the Main Stand for pictures, thanks to a helpful gentleman from the club.
Ian took the opportunity to catch up with his sleep, leaving myself and Lee to go on a Wetherspoons pub crawl, visiting three of the four pubs, the only one we didn’t visit was the pub nearest the ground - The Britannia, which was packed out with thirsty Geordies with the queue outside stretching back down the street.
The trek home didn’t get off to a good start as we struggled to get out of the car park. In our part of the world drivers are mostly polite and considerate to one another but in the far south it seems to be an “all for one and bugger the rest” attitude.
We encountered some heavy snow showers as we travelled through Derbyshire, but apart from that we had been very lucky with the weather, meaning I arrived safely home just after midnight.
As far as ticking off ‘The 92’ is concerned, my geographical location means this is the mightiest tick of them all and thanks to my life long travel companion Ian, it was achieved with relative ease. Plymouth supporters view the long journey very differently to us, we did it in just over six hours, so to us it’s not so much of a long old poke, more like a nice little day trip out to the coast.

Ha! Funniest thing I have read this year...

Green Army!...that advert came on the telly yesterday and I was thinking of you going all the way down there.

Shame you didn't get any goals but a good trip nontheless it sounds like.

Hoping this cold stuff (see my post tomorrow!) shifts soon and I hope to get some plans for a trip to somewhere in the NE soon.

Impressive trip! I think you should've led with the story of your journey etc [which was great] and had less of the stuff skimmed off the net, though.

I also do a groundhopping blog.

I've added a link to 'Up for the Cup'

Sometimesyou must be similar in character will have suffering enough from the stern still ploughing and foaming through the press, take things calmly. I liked reading this. I bookmark your blog. Keep up the good work. I am sure you will get some thumbs up :) & give your valuable feedback on http://limosbusesjets.com

I made this trip twice this season, but the other way around. First we had our league match at "the real" St. James' Park and then the FA Cup replay on a wednesday evening. And guess what? We lost both.

Also, we are used to long journeys, so this trip wasnt too long.

I'm doing research about a Plymouth Roofer and found your blog. Interesting story, thank you.