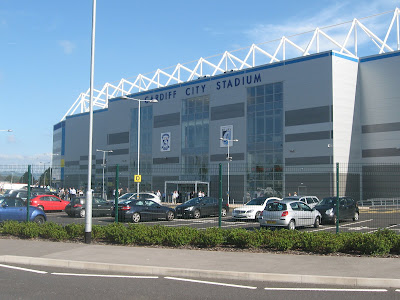 Riverside Cricket Club formed in 1899, playing at Sophia Gardens on a ground roughly next to where Glamorgan Cricket Club now stands.
The club applied to become Cardiff City FC after the Welsh town was giving city status in 1905. Their request was initially rejected, but were eventually allowed to take the name in 1908 once they became a professional club.
Within two years the club moved to a new ground on the site of a former rubbish tip, naming the ground after a British member of parliament, who was killed during the First World War - Lord Ninian Crichton-Stuart.
After 99 years at Ninian Park, Cardiff City moved a short distance to their new purpose built 26,828 capacity - Stadiwn Dinas Caerdydd.
The stadium was built on the site of the former Cardiff Athletics Stadium by contractors Laing O’Rourke and forms part of the £100m Leckwith development.
The 60 acre project includes the 5,000 capacity Cardiff International Sports Stadium, which is used by Welsh League Two side Cardiff Bay Harlequins, as well as a retail park, new housing and hotel with bar and restaurant.
Cardiff City Stadium was designed by Arup Sport, constructed at a cost of £48m. Work commenced in early 2007 with the completion date set at December 2008, however the not so great British summer of 2007 caused a delay, so work was finally completed in May 2009.
The new stadium is very nice with all the facilities and comfort you’d expect from a spanking new stadium. However the one thing it lacks compared with the old ground over the road is the intimidating atmosphere, which was worth a goal head start when Ninian Park was jumping and filled to capacity.
The ground is identical on three sides, a single tier of shiny blue seats in the Ninian Stand, Grange Stand and Canton End. Away supporters are allocated the corner of the Grange Stand which also has a large video screen.
The Grandstand is different, having an extra shelved tier with a row of executive boxes behind and corporate hospitality suites in each corner.
There’s a large walkway which runs at the back of the stands which is used as a TV gantry. There’s plenty of scope to enlarge capacity if City ever reach the promised land and achieve Premier League status. 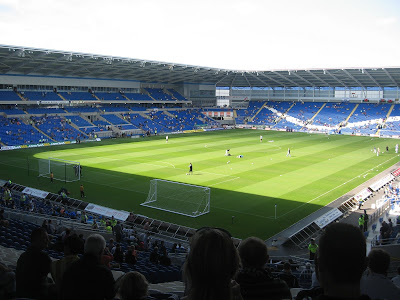 With all the backroom shenanigans and lack of cohesion behind the scenes it’s a surprise to report that Newcastle United have made a great start to 2009/10.
Prior to this game United had 13 points out of 15 including four clean sheets in a row ( Straights up! Check the stats) which earned caretaker gaffer Chris Houghton the Manager of the Month award for August.
The defence again held firm against Cardiff and old boy Michael Chopra, never looking in danger once they’d taking a 18th minute lead with a Fabricio Coloccini header.
The big hairy Argentinean probably had his finest game in a black and white..sorry! Solero coloured shirt. He started and ended the move laying the ball out wide to Ryan Taylor, his right wing cross was met with a towering header.
As well as a strong defensive display, Newcastle played some good passing football but lacked punch up front. Due to injuries problems, it was left to Nile ‘lone’ Ranger to lead the line himself, the youngster produced another impressive performance.
For City’s endeavour they never created any clear cut chances, efforts at goal were blocked by the Toon defence or comfortably collected by Harper.
City had a good penalty shout when Steven Taylor appeared to handle a Chopra shot and then in the last minute an opportunity to clinch a point. Alan Smith brought down Bothroyd on the edge of the penalty area, receiving a second yellow card and his marching orders. The resulting free kick by Chopra was fired into the Newcastle brick wall, assuring a professionals away performance and a fifth clean sheet on the bounce (Honest - take a look) 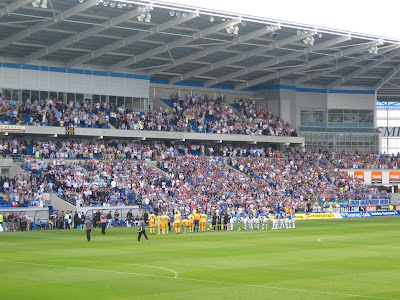 As is always the case when watching Newcastle away I travelled with Ian and Lee Patrick (100FGC squad nos. 2 & 79) Ian gave me the option of setting off at midnight or 4am, I told him that 5am would be ok, but Ian always has the impression that pending disaster awaits, so 4am it was.
A great driving performance by Ian, at total of 13 hours on the road, which is even more astonishing when you consider that when he picked me up, he announced that his attempt of an early night ended up as a sleepless night. So we could have easily ended up deserted in a ditch somewhere off the M6!
We arrived in Cardiff at 10am, taking advantage of free parking on Hadfield Road which is a short walk from the stadium and handy for junction 33 off the M4.
I wanted to take a proper look around Cardiff, so I left the lads and headed off alone into the city centre. On my stroll around the city I just happened to bump into three Wetherspoons pubs (which was nice!)
We arrived back home at 11pm and so that completes number one in a series of three, in our long Championship journeys of 2009/10 and I'm afraid to say that this trip into Europe is the shortest of the three.