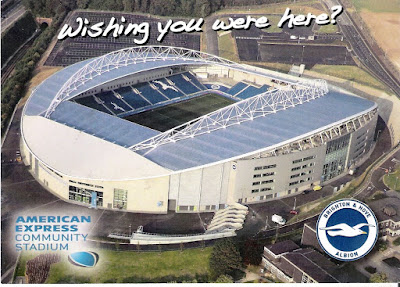 And so it came to pass that on the thirteen thousand six hundred and ninety fourth day since I went to football ground number one, I can at long last look at the league tables of the top four English divisions knowing I’ve done the bloody lot!
The 92nd ground honour in this long belated achievement goes to the Amex Stadium, the new home of Brighton & Hove Albion which also completes a Seagulls hat-trick, following on from visits to the Goldstone in 1983 and an enjoyable day with the Brighton lads at the Withdean last April. 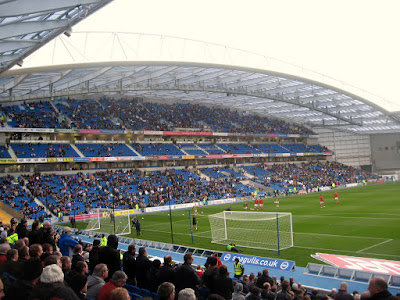 The American Express Community Stadium is located near the village of Falmer in Brighton and Hove. The stadium was designed by London-based KSS Architects with building work undertook by Buckingham Group in December 2008. The £93m construction of the stadium is sunk three storeys into the ground, having 138,000 cubic metres of chalk removed for its foundation.
The ground is dominated by the large three-tiered West Stand, which has two strips of executive facilities above and below the middle tier, including 14 luxury boxes and the premium fans' 1901 Club .The bottom tier is the largest which also has the managers/players section and altogether the stand has a capacity of 11,833.
The Family Stand is on the east side which holds 5,404 fans and like the West stand has an attractive curved roof. If the need arises for the stadium to be increased a further tier can be added to the East stand which would bring the capacity up to 30,000. This also means the extra unused space at the rear gives an unfinished appearance to the stand.
The North Stand has 2,688 seats and is occupied by the club's main vocal support and also has a control centre and large video screen scoreboard. I was amongst the visiting away supporters in the South stand which is similar in design with 2,575 seats. Both stands behind the goal have distinctive sloping roofs which link the four individual stands together. 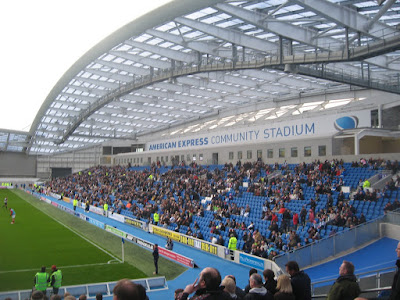 The stadium was completed in May with the first game, the now customary new stadium ‘tester match’ being the 2011 Sussex Senior Cup Final between Brighton and Eastbourne Borough on the 16th July, followed by the official opening with a pre-season friendly with Tottenham Hotspur at the end of that month.
The first League fixture was against Doncaster Rovers on the 6th August, who were coincidently the last opponents 14 years earlier at the Goldstone Ground. The Seagulls supporters celebrated watching League football in a ground which they can finally call their own with a victory, with two late goals from substitute Will Buckley clinching a 2-1 win.
The Falmer Stadium confirmed sponsorship naming rights with American Express Europe, Brighton and Hove's biggest private sector employer. The Amex includes a banqueting and conference facility, a nursery school crèche, education facilities for the University of Brighton, large office space, the ticket and merchandise store and the 200 capacity ‘Dick's Bar’ named after the club's life president Dick Knight.
The stadium offers real ales from local breweries; Harveys and Dark Star, both businesses have been supporters in the club's pursuit for a new stadium and there’s also a unique special guest beers option from breweries local to the away teams.(Although drinking ale isn’t something that this author indulges in*wink*…Eddy) However on this visit there was no guest ales and the Harveys Ale was off the menu, the only option being puffy larger, on which I declined. 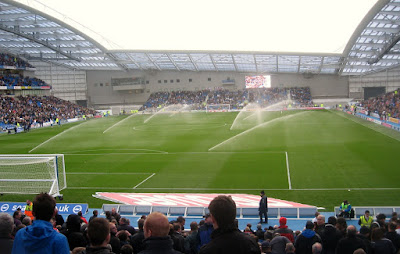 As I was at Brighton’s last game at the Withdean in an ideal world it would have been great to have been at the first match at the Amex, however the demand for home tickets has meant my eventual visit is amongst the away supporters, so for this day I was an honorary Tyke!
I left Newcastle on the 0755 to Kings Cross, alighting at Peterborough where I met up with Squad#88 Graham Precious, who was also completing ‘The 92’ for the first time. I was pleased that the two stars of Radio 4’s The Completists got to finish together, as Graham has played a major part in my progress over the last few years, chauffeuring me to the likes of Aldershot, Burton, Chesterfield and Crawley. 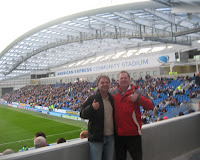 We drove out of Peterborough at 1120 and arrived at Falmer at 1.30 which was around the same time as everyone else who travelled by car. In search of a decent parking space Graham drove straight into the main car park and told the steward that a parking space was reserved in the name of Precious with his personal suffix of “As in valuable” The parking steward searched in vain for a Mr Precious on the parking guest list, which obviously wasn’t there, but after a quick word with his gaffer we were allowed through to pick up a free prime parking spot.
I bought a programme and was pleased to see that our 92 visit was mentioned 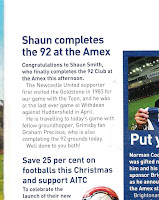 on page 9, before visited the club shop where the large queue outside was reminiscent of the days when pensioners stood outside the post office on a Monday morning to pick up their pension an hour before it opened. I bought the usual pin badge, a postcard (see top picture, only cost one English pound) and for this special occasion a pint glass with the Seagulls crest which I’m going to have engraved with the details on reaching the 92.
At half time I met up with Squad #111 Steve Mann who had travelled from Hastings for the match and ground visit. It was the first time we had met and he too had the clever idea of picking this game and an away end ticket to tick off the Amex. 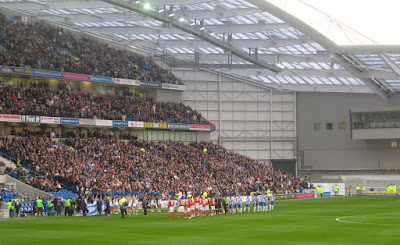 As the game went into the last few minutes with the result assured, we made a sharp exit and just as we hit the A27 5Live confirmed a 2-0 win for Brighton had ended a run of nine league games without a win.
The first ever Sunday match at the Amex started quite even as both teams playing turns each at having an unsuccessful furrow up field. The best chance for the visitors came on 27 minutes when a Perkins chip was tipped onto the crossbar by “There’s only one Stevie Harper” then just before the break the hosts took the lead, when a shot by Harley was well saved before falling into the path of Gordon Greer, firing his left foot drive past the despairing defender on the goal line.
The Seagulls doubled the lead just before the hour mark when a penetrating run and shot from Mackail-Smith came back off the crossbar but Ryan Harley was on hand to finish off his good work with his second goal of the season.
A welcome result for Gus Poyet’s side, the win takes Albion back up to 10th spot and only two points from the play-offs positions.
The quick getaway meant I arrived back at Peterborough at 7.30pm, which gave me a good hour for my first pint or three of the day. I had plenty of time to visit the two JDW’s in the town; The Drapers Arms and College Arms, which I found easily enough but what I couldn’t find was a chippy or takeaway, as I was in desperate need of some bait after having nothing since breakfast.
I arrived back home just before midnight, tired but delighted that I’ve finally done it at last, my 123rd League grounds on from my first visit to St James Park in 1974 is no.92 - The Amex Stadium, a great new addition to League stadia and worthy final destination on my long quest.
For you Googlers a more detailed look at Brighton & Hove Albion can be read on my visit last season; My Matchday - 285 Withdean Stadium.
Also you can read more about how I finally did ‘The 92’ in the article - All Roads Lead South

Thanks!
I shamelessly forgot to mention the lovely spongy seats at the Amex.


This is an intresting blog that you have posted, you shares a lot of things about All Airport Returns Cheap Taxis, Brighton & Hove to London Heathrow and Stansted to Brighton & Hove. Which are very informative for us.Thanks