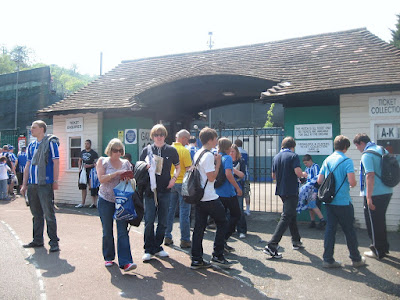 When a club play their final match at a home stadium, the occasion is usually met with a touch of sadness, retracing memories of matches past can bring a tear to even the most hardened of supporters. There is however one exception to the rule, as Brighton & Hove Albion aren’t just celebration winning League One, but also leaving one of the most unpopular grounds to have ever graced the Football League.
Brighton & Hove Albion left 95 years of history behind at the Goldstone Ground in 1997. The ground was sold by a bunch of former wanksplat board members in an attempt to clear the club's mounting debts and avoid bankruptcy, without any thought or dialogue with the club’s supporters .

My only ever visit to the Goldstone Ground was in 1983 when Second Division Newcastle United faced The Seagulls in the 3rd Round of the FA Cup.
At the time Albion were at the foot of the First Division, so there wasn’t too much between the sides, so we travelled to the south coast in optimistic mood.
I remember that trip well, we left at midnight, stopped off in London early doors, then headed down to Brighton at 11am. On the day United played well but fell behind to an Andy Ritchie goal on 56 minutes. The Magpies rallied for an equaliser and it finally came on 72 minutes with a right foot drive from Terry Mac, earning a replay which we all arrogantly thought would be a formality at St James Park the following Wednesday

Brighton’s FA Cup exploits of 1983 are well remembered for Jimmy Melia’s shoes, the team travelling to Wembley by helicopter and of course the immortal commentary quote of “And Smith must score” however none of this would have becoming part of FA Cup folklore if it wasn’t for the incompetence of one man, step forward - Mr Telford Mills(Rotherham, South Yorkshire)
Referee Mr Mills became the Geordie public enemy No.1 (one of several throughout the decades) after disallowing not one, but two legitimate looking goals from Varadi and Keegan in the last five minutes of the replay denying United a place in the 4th round of the ‘83 cup.
Brighton won the game courtesy of a goal on 62 minutes by Peter Ward, his final goal for the club which set up a home tie with Manchester City on route to the twin towers of Wembley. Keegan was quoted afterwards, saying “I’m as sick as a Skegness donkey” Well we know how he felt, as we’ve had that nauseous feeling annually for the last 28 years.
(Video evidence HERE)
Peter Ward Soccer Star picture courtesy of Nigel’s Webspace http://cards.littleoak.com.au/

Brighton ended up at the Withdean after a failed attempt to lodge at Fratton Park with Pompey before arranging a ground-share 71 miles away in Gillingham.
Albion played at the Preistfield Stadium for two seasons and after another unsuccessful ground-share bid at Worthing they returning “home” to the only available option in Brighton at the home of the local athletics club.
The Withdean Stadium is named after its location in the Brighton suburbs, built in 1936 on the site of Marshall’s Playing Fields and originally used for lawn tennis.
The stadium currently has a capacity of 8,850 and during the club’s 12 year stay the record attendance was 8729 for a League Cup tie with Manchester City in September 2008.
The North Stand is the only permanent fixture, originally at the stadium before the club took residence and will be the only stand left when they leave, The stand provides the only cover, running pitch length and decked out with light blue seats. The stand is open at the back, apart from advertising hoardings so you can clearly see The Sportsman pub which sits behind it.
The other three sides are made up of temporary stands with green seats, The largest is on the South Side which runs pitch length and in a previous life appeared as temp seating at The Open golf tournament with a capacity of 4,500.
The East End has two large stands one of which is a Family Stand and there’s also a small section of seats and disabled section below the cabin which has the digital clock on top.
Away supporters are designated the West Stand which, due to the surrounding running track, look so far away from the action they could be in a different postcode! Changing rooms and hospitality facilities are provided by portacabins in the north west corner
In October 2005 Deputy Prime Minister at the time John Prescott, gave permission for Albion to build Falmer Stadium The project was delayed due to opposition from Lewes Council and local residents in Falmer, until permission was once again granted in July 2007 by Hazel Blears, the then Secretary of State for Communities and Local Government. Preliminary work finally got underway in November 2008 and the new stadium will open in July in readiness for The Seagulls 2011/12 campaign in The Championship. 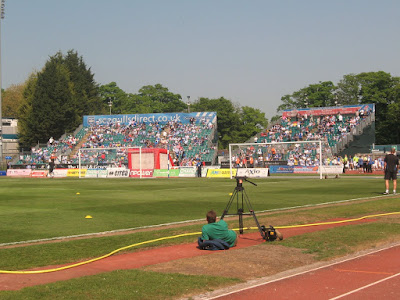 As you may expect another canny-hike meant an early start, leaving Newcastle on the 0635 to Kings Cross, then catching the tube to London Bridge for my connection south, eventually arrived at my destination just before 11.30.
The city is the major part of Brighton and Hove on the south coast of East Sussex. The ancient settlement of Brighthelmstone dates before the Domesday Book,developed during the 18th century as a health resort for sea bathing and a popular destination for day-trippers from London.
Brighton experienced rapid population growth at the turn of the sixties, but its biggest claim to fame in the 20th century came in 1974; the Brighton Dome the venue when ABBA triumphed with Waterloo in the Eurovision Song Contest.
Brighton always reminds me of the 1979 movie Quadrophenia, based on The Who’s Rock opera of the same name which formed the backdrop to some of the pictures main scenes
I recently seen the film on ITV4 and was astounded by the number of times the line “Uwe going darn to Bry-tin at the weekend?” was used in the first half of the film and watching it now compared with over 30 years ago, except for a few redeeming features its basically not that good.(It’s bobbins!…Eddy) 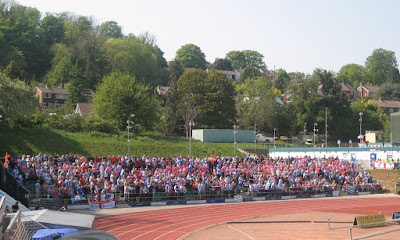 On arrival I was greeted by Squad#77 Danny Last from the multi-award winning European Football Weekends blog. Our meeting was a bit of a Frost/Nixon moment and I would describe Danny as the James Brown of internet football journalism ie; “The hardest working man in blog business” I’ve knew Danny for a few years, but only via cyberspace, through text message, email, Facebook and Twitter but we’ve never communicated the old fashioned way via the art of chat, so it was great to finally but a voice to the face.
We called into the Brighton club shop then had a quick bevvy in 'The Evening Star' before heading to ‘The Battle of Trafalgar’ to meet up with the rest of Danny’s mates, or as I like to call them - “The Fred Perry Appreciation Society“ (I fitted right in with the correct attire)
The pub has a suntrap beer garden at the rear, so we stayed for a few pints until catching the 1407 train to the ground. 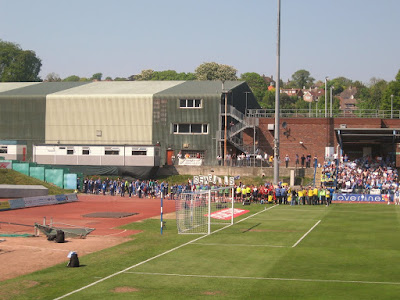 Prior to kick-off I confessed that I wanted Huddersfield to win, mainly due to the Geordie connection of ex-Mags Lee Clark and the aforementioned Terry Mac as well as ex-Heed striker Lee Novak. I also would love to see the Terriers clinch the second automatic promotion spot ahead of Southampton, as I’m not too chewed on The Saints after an unpleasant visit to St Mary’s a few years ago. Daniel Ward scored a late winner in a thrilling 3-2 win which meant I did get the result I wanted but maybe not the eventual outcome.
Benik Afobe fired Town ahead early on with a neat finish before Liam Bridcutt went close for the Seagulls with a header which smacked the crossbar.
Ashley Barnes levelled early in the second half, scoring the rebound with a diving header when his penalty was saved after a foul on Elliott Bennett.
Afobe capitalising on a defensive mix up to regain the lead but it was short lived as Matt Sparrow levelled with a great finish with a low right foot drive, before Ward fired in deep into injury time to win it for the Terriers.
Only goal difference separates the two sides battling for second spot but Southampton have a better goal difference as well as a game in hand. 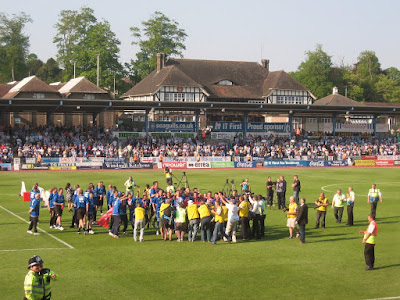 Post match the Brighton team were presented with the League One trophy, with manager Gus Poyet leading the chorus of “We Are The Champions” The Seagulls supporters trooped out of the Withdean for the very last time, without any guilt or regret about leaving behind a stadium, that even through its unpopularity, it has witnessed four trophies of sorts in 12 years.
I also trudged away from the ground for the long journey home delighted to have picked the perfect occasion to visit the stadium, being the last Seagulls game, seeing the trophy presented and being a lovely sunny day, the perfect conditions for such an open stadium.
I would like to thank Danny for making it possible by “calling in a favour” regarding the match ticket and being a perfect host and I look forward to returning to Brighton early next season at their sexy new Amex Stadium in Falmer. 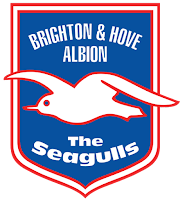 The pleasure was all mine old chap. I feel good having read that report. Same again next season mate, only in much more salubrious surroundings.

Thanks again Mr.Nixon for a cracking day! Pass on my regards to the F.Perry.A.S. Cheers! Mr Frost.

Good to meet you, Shaun, and I enjoyed the read. All the best, and hopefully see you again at some point somewhere a bit more shiny and with no sand pits.

- The fat one in the black Fred Perry

Great report Shaun, hell of a trip but it appears it was well worth it.


This is an intresting blog that you have posted, you shares a lot of things about All Airport Returns Cheap Taxis, Brighton & Hove to London Heathrow and Stansted to Brighton & Hove. Which are very informative for us.Thanks