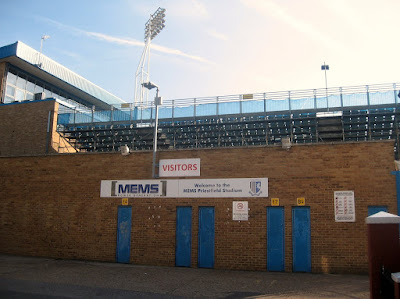 My penultimate ground on this long journey towards the completing the 92 takes me to the only ground in the football League which is set in the Garden of England - the county of…(wait for it)..Kent!
Gillingham is a town in the unitary authority of Medway which includes the settlements of Brompton, Rainham, Hempstead, Rainham Mark and Twydall.
The name originates from the Gylla's family, followed by the Old English words; ingas (family, followers) and ham (village, homestead) and was first recorded as Gyllingeham in the 10th century.
Gyllingas was a war lord named from the old English word "gyllan" meaning "to shout". He was a famous man in Kent history as he led his fighters into battle screaming and shouting. (If a biopic was made Brian Blessed would be perfect for the role…Eddy) 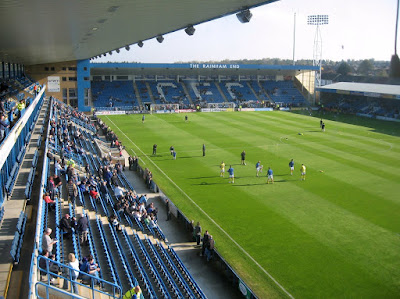 New Brompton FC formed in 1893 originating from a team called Excelsior which played on the Great Lines. The new club proceeded to purchase a ground on Priestfield Road for £600, which had a wooden stand and a pavilion.
In 1899 a stand was built by a group of dockland workers on the Gordon Road side, made up of wooden benches under a thin roof that remained robust and survived until 1985, being the oldest remaining stand in senior football at that time.
The club changed their name to Gillingham FC in 1913 and the following year built a new stand which was damaged in a gale, having its roof ripped off and most of the ironwork damaged. The structure only lasted one year due to its poor design, pity the dockland workers weren’t around to build another sturdy stand in exchange for beer and tabs!
The Gills were elected to the newly formed Football League Division Three in 1920 which was followed by extensive ground work over the next decade with new terracing and cover to the Rainham End.
The club lost its league status in 1938 and as a Southern League club the renamed Priestfield Stadium witnessed a record crowd of 23,002 for an FA Cup tie with QPR in 1947. Gillingham again became Kent’s only League club in 1950 and more ground improvements followed at a cost of £28,500. The pitch was levelled with a new perimeter wall, as well as new terracing and cover added on Gordon Road.
In 1963 Priestfield became one of the last League grounds to install floodlights at a cost of £14,000, switched on for a League Cup tie with Bury, which was the last noteworthy development until the Taylor Report in 1985. 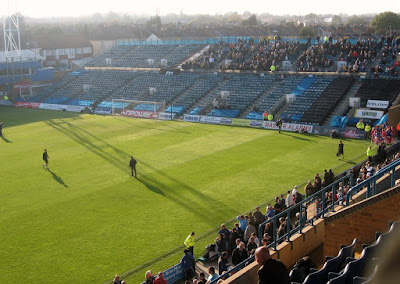 The Priestfield Stadium as we know today was developed after Paul D.P.Scally took over as chairman in 1995.
The first new stand was built in 1997 on the unused Gordon Road side. The 2,400 capacity stand cost £2m, kept as a single tier due to row of houses on the street, with only 12-15 rows of seats. Above there’s a TV gantry and electric scoreboard central with the club name on the facia in white capital letters.
The main stand at the north side is the Medway Stand opened in 2000. The two tiers are split by a row of 20 executive boxes with two rows of seats outside each box. The stand also housed the changing rooms, media centre, fitness facilities, offices, club shop and the Blue Rock Café nightspot.
The Rainham End terrace was replaced with a single tier cantilevered stand in 1999 and like the other completed stands is decked out in blue seats with white lettering.
The Town End terracing was removed in 2003 and replaced with a temporary seated stand named after the late legendary football commentator Brian Moore who was a former director and Gills supporter. The away end has 3,400 uncovered green seats and depending on the away following only one section of seating is open to spectators.
In the north-east corner is the Conference and Banqueting Centre and the players enter the pitch from here. The ground is completed by a set of four tall corner floodlights which I spotted from the train station and due to a sponsorship deal the ground has been rebranded as the MEMS Priestfield Stadium with a capacity of 11,582 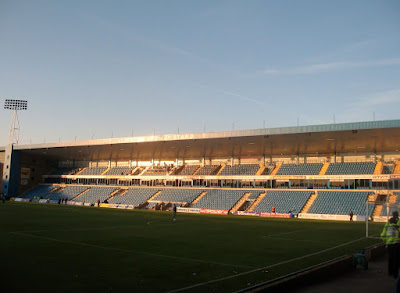 Even though I attended the match as a neutral, I favoured the home side because like a vast majority of football fans on Tyneside, we have a soft spot for the Gills as they were the team that sent SAFC into Division Three in 1987.
As the game progressed my favouritism diminished in desperation to see some goalmouth action from either side, as neither keeper had a save to make in a dire opening 45 minutes. Then when least expected, just on the stroke of half time, the best effort on goal found the back of the net with a spectacular effort from 25 yards from Lewis Montrose.
The U’s dominated after Joe Martin was sent off for a second booking early in the second half with Davis, Potter and Hall all going close for the visitors.
Goal scorer Montrose was shown a late red for a rash challenge on United substitute Asa Hall, then deep into injury time James Constable missed a sitter when clean through on goal, chipping his effort well wide of the post.
The nine-men held on and the result leapfrogged Gillingham above Oxford into fifth spot as the U’s drop down to seventh after their eight-game unbeaten run came to a disappointing end. 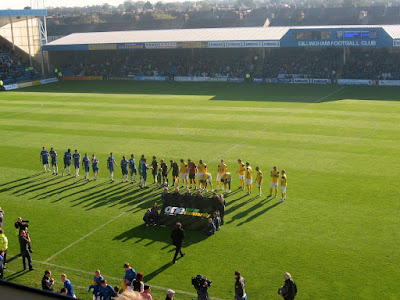 The journey from Newcastle to Gillingham is quite a decent trip, once arriving at Kings Cross there’s no clart on with the tube, just a simple stroll around the corner to St. Pancras International to catch the South Eastern connection to Kent. So after departing on the 0630, I arrived in Gillingham bright eyed and bushy tailed by 11.15am.
As Priestfield is a short 10 minute walk from the station I decided to head straight there to take some photos plus I thought while I was on, I may as well enquire about a press pass, because like wor lasses granny use to say “shy bairns get nowt”
On arrival the on duty steward allowed me through the players entrance to the media office where I eventually met a very nice helpful club official called Ray Foord, who on my behalf tried to contact the press officer on his mobile. Unable to make contact he took me up into the players lounge to wait, telling me to help myself to a hot drink and a sit down after my long journey south.
Just then an elderly club official approached me telling me off for wearing jeans as there’s a dress code in the players lounge. He also mentioned that apparently I’ve got him into some kind of trouble, that was until Ray piped up to tell him that I’m not the man he thought I was, seemingly I have a doppelganger in Gillingham!
I decided to decline the offer of a drink and a seat and head into town instead. “Why do you want to do that” said Ray “There’s nothing there!” Of course there were some things in town that I found interesting - Medway Records which is a cracking music store and two GBG listed pubs; Will Adams and the Frog & Toad. When I returned at 2.15pm there was a press pass with my name on it at the desk, so many thanks for your help and hospitality Mr. Foord you’re a genuine gent.


I had planned to meet up with squad#68 Jonathan Elton when I eventually came to tick off Priestfield, as he lives in nearby Chatham, but unfortunately it was badly timed as he’s currently on holiday.
I received an email from squad#153 Mark Chatterton this week saying he would love to meet for a drink to celebrate my 300th ground, but he text me that morning saying he couldn’t make it due to car trouble.
Last week I had my annual bevvy with squad#31 Steve Dobson prior to his beloved Spurs playing at Newcastle, he was in the company of football blogger Richard Bysouth who said he hadn’t been to Gillingham. But guess what? I didn’t meet him either, as he was running late so we didn’t have time for a drink, although luckily I bumped into him at half time and we also had a quick word after the match.
Overall I had a great day, the only downer being engineering works between Peterborough and Doncaster which put an extra 2 hours on the journey home, so it was nearly midnight when I arrived back at 100FgC HQ. Nevertheless that couldn’t spoil my good mood after completing another expedition from The 92 tour, which leaves me with just one left to go and that final destination is a club with a brand new stadium that coincidently once used to play home games at Priestfield.

I went to the Will Adams when I went there, decent pub

You picked a good game to go to from a Gills point of view, the second half was very tense but it was great to get the result - I was sitting in the Rainham End as usual. Good luck with completing the 92 at Brighton.

Congratulations on reaching T-minus-One in the 92 Countdown. Enjoyed your Gills photo album - you got some good pics of what in my view tends to be an under-rated ground to visit. There's also a really idyllic marina within walking distance - which we discovered by accident before attending the match against Leeds last year. Train rides for the kids (and big kids) too. Best visited on a sunny day, mind.