An early kick off in the Central Midlands League Cup meant I could double up with one off my T’do list, with both matches in Scunthorpe separated by a 5 minute drive. 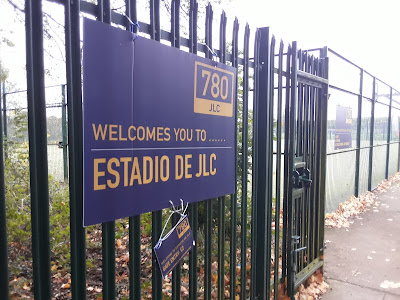 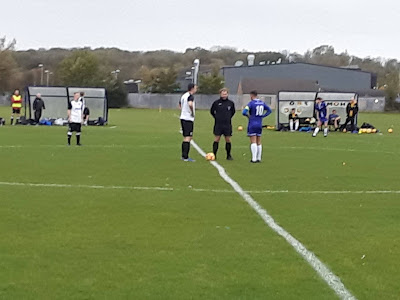 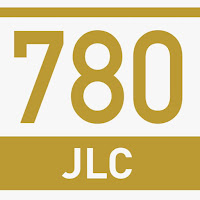 780 JLC FC are a new fully formed club linked with 780 Coaching and the John Leggott College. The club joined the Central Midlands Football League at the start of this season, playing in Division One North.

John Leggott College is a sixth form college founded in 1958 as John Leggott Grammar School with 600 pupils aged 11–18. The Sixth Form College was established in September 1968 due to a reorganisation of education in Scunthorpe. It is commonly known as JLC and now has more than 2000 students. 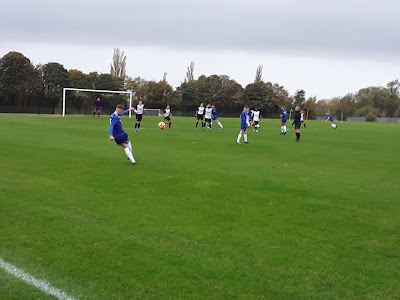 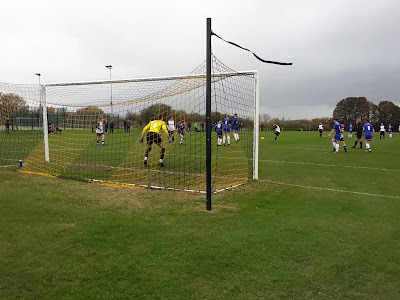 The main pitch is roped off with a pair of large Perspex dugouts at one side. There is a refreshment kiosk where match admission is also taken. One of the signs welcomes you to Estadio de JLC, which is a better ground name than John Leggott College, so I’m listing it as such. 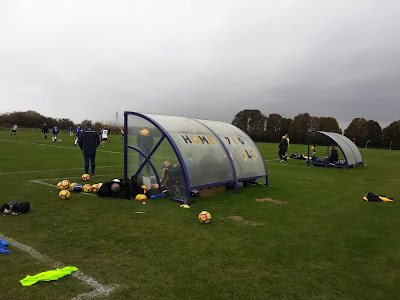 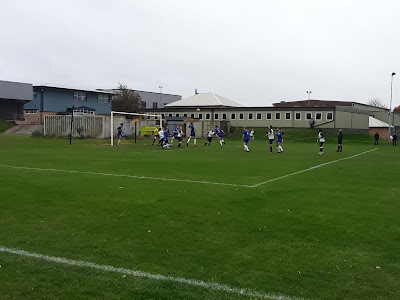 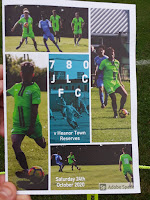 Full marks to both teams in producing a cracking game played in atrocious wet weather. Heanor went two goals ahead, as Josh Melville capitalising on some poor defending, before a Milan Vrzal daisy cutter free-kick from the edge of the box somehow went over the goalies hands. 780 striker Tom Garner grabbed a hat-trick, catching out the ‘keeper with a lobbed effort then equalising just before half time. Heanor regained the advantage when a corner kick was met at the near post by Jack Desmond, only for Garner to strike again with a curled shot from outside the box. The visitors finished the match strongly with two late goals from Fortunate Sithole and Alex Lynham, finally killing off 780 as they ran out of steam, not helped by the dismissal of Brad Teale in the 80th minute by the referee.

On the subject of the ref, I must give him a mention. For starters, he turned up late, strolling onto the pitch after the scheduled kick off time with a cup of coffee in hand, before spending the next five minutes fannying on, instead of getting the game started. At half time the players wanted a quick turnaround as the weather conditions worsened, but he pissed off and got himself another cuppa, then added nearly a quarter of an hour added on time. So in a nutshell a very arrogant and unprofessional man in black, and one I’ll be interested in seeing in action again. 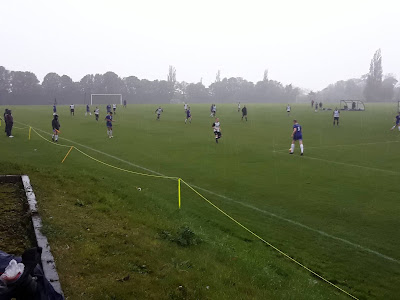 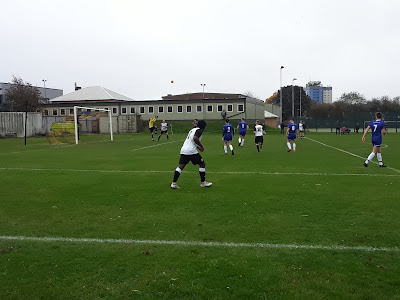 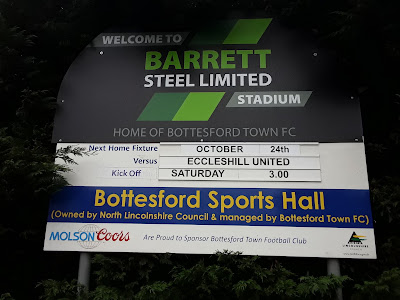 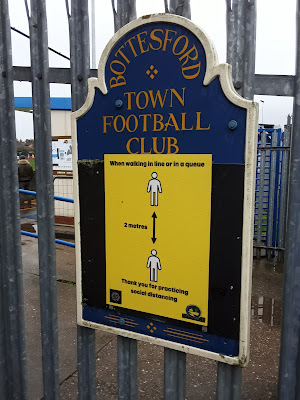 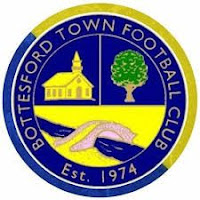 Bottesford is a historic village with town status in North Lincolnshire. The town is just south of Scunthorpe town centre with its football club Bottesford Town established in 1974. (population:over 11,000)

The Poachers were promoted to Premier Division in 2015-16 after 3rd place finish in Division One. 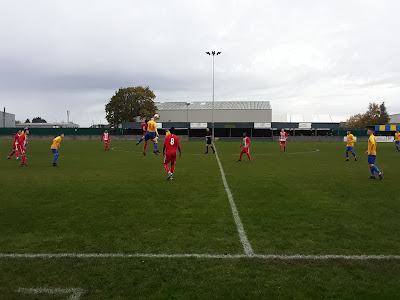 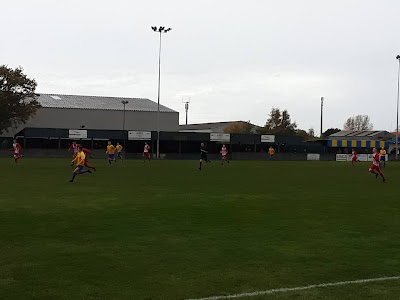 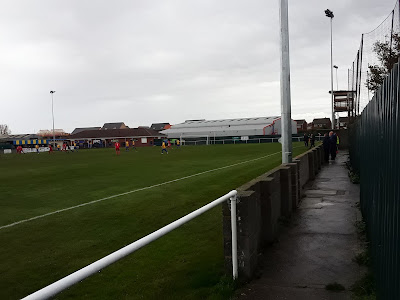 The ground has all the main spectator facilities down one side. There's a covered stand which has a mix of seats and standing, with another enclosure with a few picnic tables next to the refreshment kiosk. The dugouts are on the opposite side, with the rest of the ground open including the Taco Bellend behind the goal. The changing rooms, clubhouse and ground entrance are in the corner. 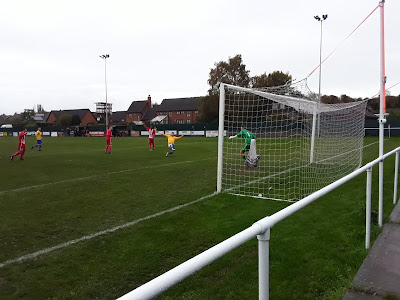 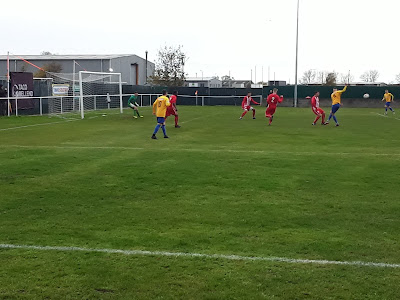 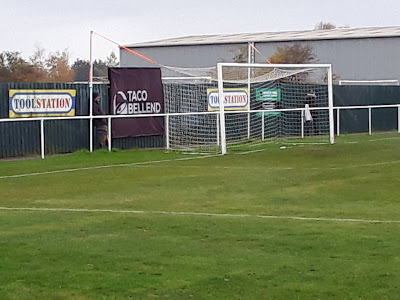 The Poachers looked set for a much needed win before the visitors fought back from two goals down to gain a point. The home team took a two goal lead with Dale Hutson lobbing the ‘keeper in the first minute, before Joe Moloney fired in the second with 25 on the clock. Just before the break the ball was played into the path of Sam Awty, who fired across the ‘keeper into the left corner of the net to make it 2-1, just before another bout of heavy rain. The equaliser arrived in the 53rd minute when a direct free kick on the edge of the box was struck home by Jonny Irving. Both teams had chances to win it but overall the draw was the fairest outcome. 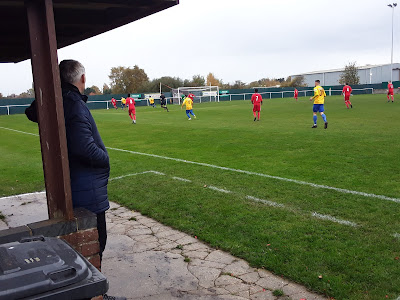 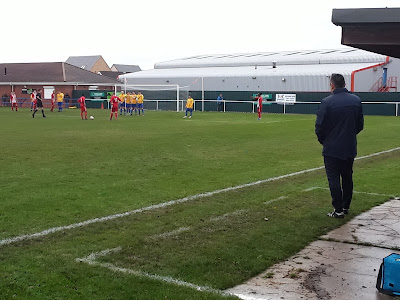 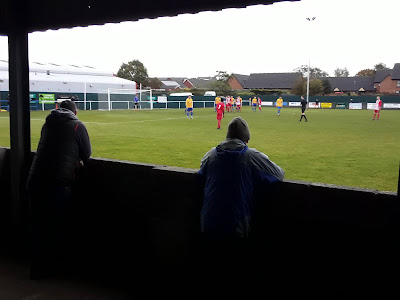 I picked up Katie & Lee at 10am, arriving in Scunthorpe town centre at noon, so a good hour for a look around before heading to JLC. The first shop we entered was a large charity shop just next to where I had parked the car. As we perused the goods on offer I said to Lee that I would love to go into a charity shop and see a rare Subbuteo set on offer. The sentence had not long left my breath when I clocked the famous green box, which I hurriedly purchased at an unbelievable price of just two British pounds. It wasn’t a rare set however, it was a Hasbro Team Edition, which I was very happy to add to my growing collection.

Lee & Katie didn’t fancy a revisit to Bottesford Town, instead they opted to warm up in a pub and I picked them up afterwards. After dropping them off I arrived back home at 7.30, when the weather couldn’t dampen an enjoyable day in Scunny. 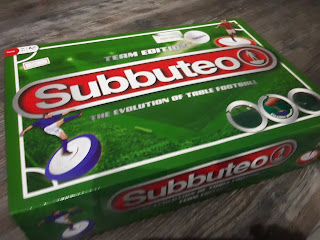