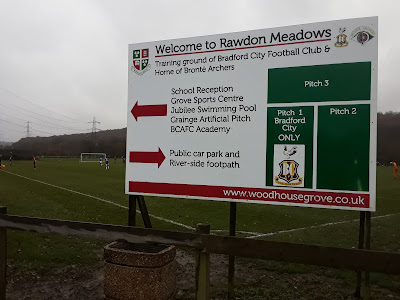 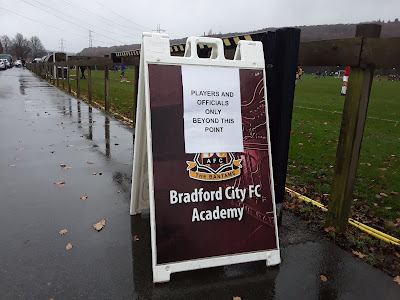 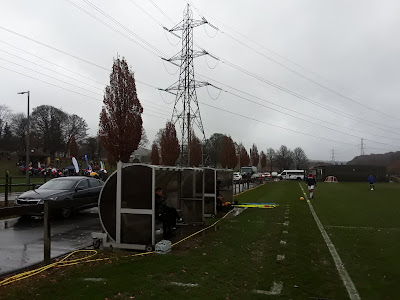 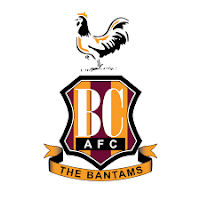 Apperley Bridge is a village in the north-east of Bradford on the boundary of the City of Leeds. The village straddles the Leeds and Liverpool Canal and the River Aire. It takes its name from the old bridge over the river on Apperley Lane. and the section known as Rawdon Meadows provides the training ground and facilities for Bradford City FC. 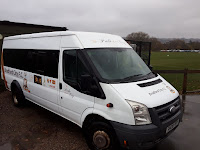 The ground is directly opposite Woodhouse Grove School, sharing the main entrance off Harrogate Road. The main pitch is at the entrance with dugouts and spectator standing on the thin road which leads to the changing rooms and offices. The pavilion was officially opened in April 2014 by former Leeds United goalkeeper Nigel Martyn. 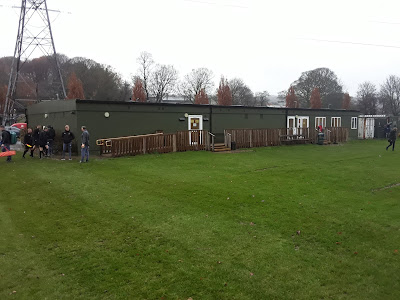 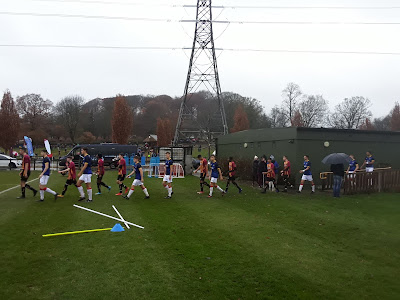 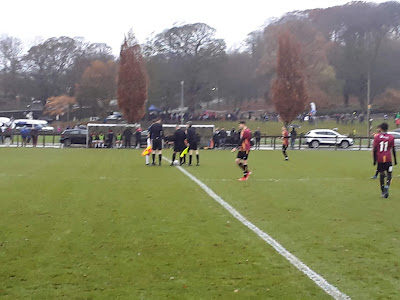 Doncaster Rovers strengthened their position at the top of the table with a comfortable win over a young Bantams team which included seven Under-16s in the side.
The leaders took a fifth minute lead with a fine left foot finish from Martijn Smith, followed by an overhead flick by Jack Watson with half an hour gone. Donny wrapped up the win when substitute Marius Skar-Conradi scored just seconds after coming off the bench. 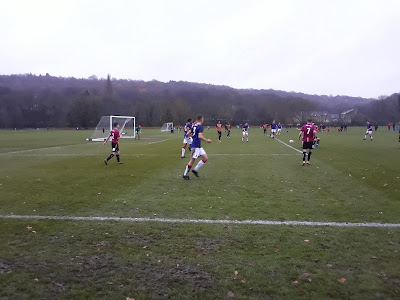 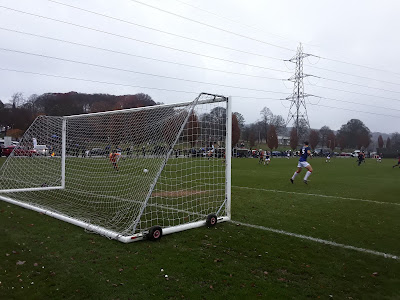 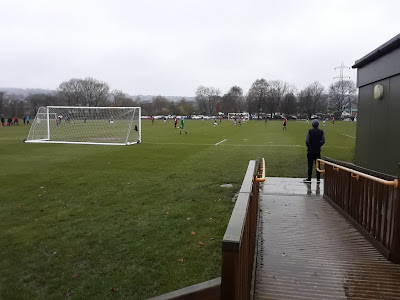 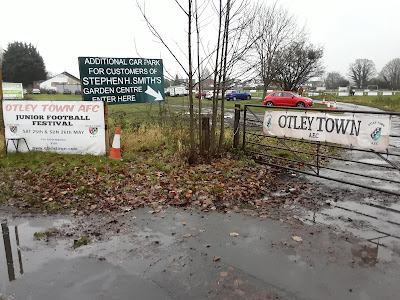 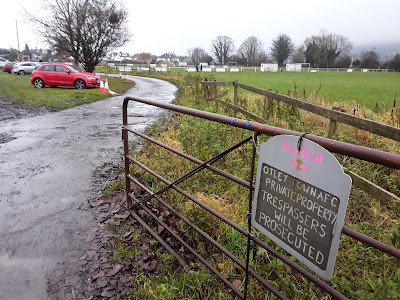 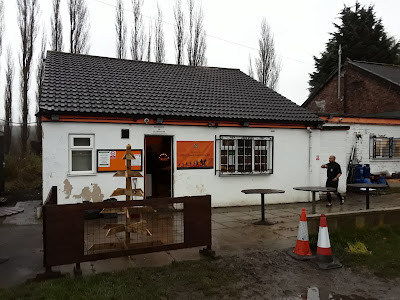 Otley is a market town and civil parish at a bridging point on the River Wharfe in the City of Leeds metropolitan borough.( population over 13,000) The name is derived from Otto, Otho, Othe, or Otta, a Saxon personal name and leah, a woodland clearing in Old English. It was recorded as Ottanlege in 972 and Otelai or Othelia in the Domesday Book.

It is the birthplace of cabinetmaker Thomas Chippendale, who was born in a cottage at the junction of Boroughgate and Wesley Street. His statue stands next to the old Grammar School that he once attended in Manor Square.
Otley regularly appears on TV as "Hotton" in the ITV soap Emmerdale. It has also appeared in Heartbeat where Otley Courthouse is the old Police Station.  DCI Banks and the drama series The Chase have also been regularly filmed in the town. 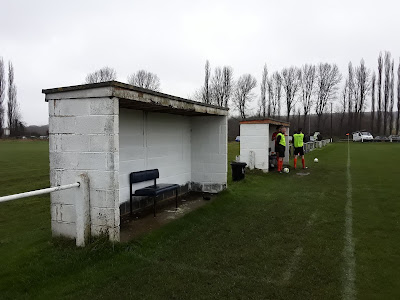 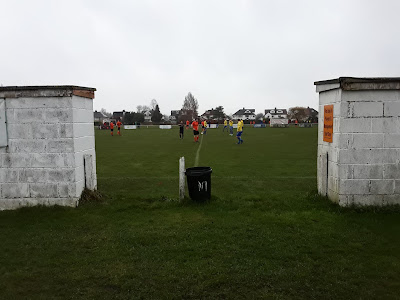 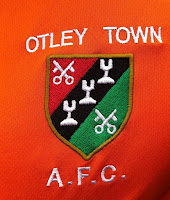 Otley Town joined the West Yorkshire League from West Riding County Amateur League in 2006. They won the Division 1 title in 2007-08 and their highest finish in the Premier Division came in 2010-11 when they finished fourth. The club also runs a Reserve side,  3rd team and a Vets side, as well as boys and girls teams at different age groups. 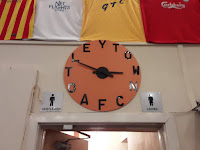 The ground is on the Pool Road where there are three pitches. The main ground is fully railled with a pair of brick dugouts on one side. There is a second pitch which runs parallel where the 3rds were playing at the same time as the first team.
The changing rooms are next to to the clubhouse in the car park, which is full of character with an array of football memorabilia. 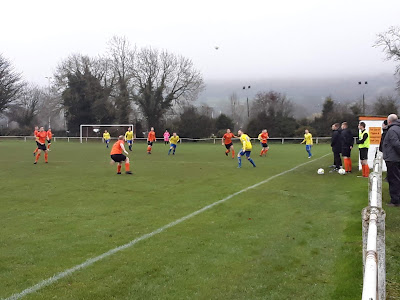 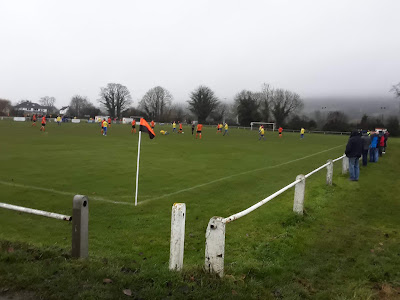 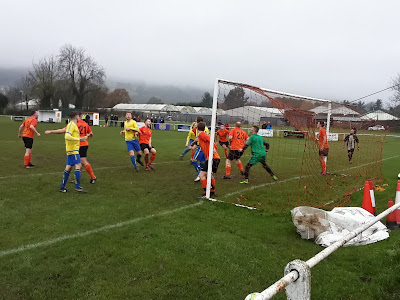 The pitch was in great condition considering the amount of rainfall. After a tight first half Salts took the lead on the stroke of halftime with #10 firing home the penalty after a foul by the home goalkeeper. The visitors extended their lead early in the second half, mainly thanks to a couple of Otley players being sin binned. #4 scored from close range, followed by #11 latching on to a long ball to fire home at the second attempt after the ‘keeper saved his initial shot.
Otley pulled a goal back on 77 minutes when Jonny Unwin converted the penalty kick, after another goalkeeper foul in the box. Town finished the match strongly but were unable to grab the second goal which would have set up a grandstand finish. 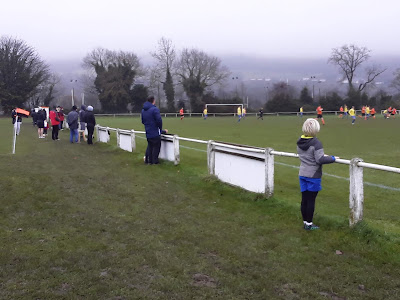 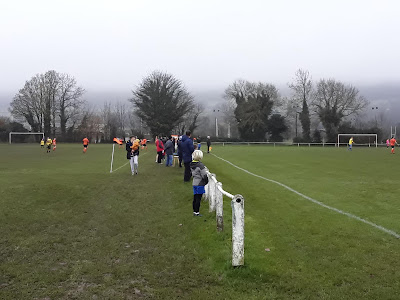 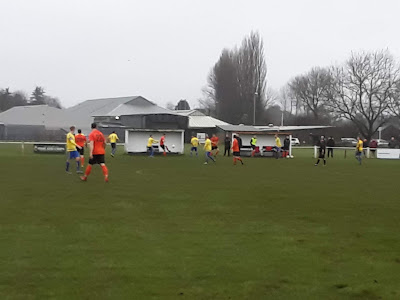 For my monthly work free Saturday I couldn’t travel too far as I had a date night planned which included a Fat White Family gig at the Boiler Shop in Newcastle. I decided a West Yorkshire double would be the best option, under 2 hours driving time each way and two early kick offs. I picked Katie & Lee up at 8.50am and as we travelled on the A1 through the heavy rainfall, we wondered if we were going to see one match never mind two. We arrived at Rawdon Meadows just after 10.30, with the welcoming sight of both teams going through their pre-match warm up routines. 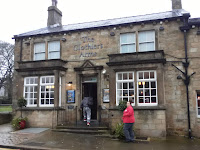 We had Headingley lined up as our second game of the day, until we found out at around noon that the match was a wash out. After a quick fixture check, a phone call and a text message, we found out that the Otley Town match was on, one of just a few fixtures that survived in the area.
The two grounds are just 8 miles apart, so we had time to call into Yeadon for lunch at The Clothier’s Arms, which was a new JDW tick for me, but a revisit for my friends. 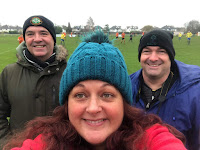 After the match our departure from Otley was unfortunately delayed as my car Simon was stuck in the clarty field which acts as an overflow car park. Following a few goes in trying to budge the car forward we had no choice but to push Simon towards the pathway, which we managed to do, so after a smooth journey back north I was back at 100FgC HQ at 5.45pm. (then out on the lash at half-six!)
on November 24, 2019
Email ThisBlogThis!Share to TwitterShare to FacebookShare to Pinterest
Labels: Academy Grounds, Bradford City, Doncaster Rovers, Otley Town, Salts FC