Sunday 29th July 2018
After Saturday’s shenanigans it was an early start on Sunday, as Mark and I departed our digs in Long Sutton for the ninety minute drive across to Wellingborough. A ‘Spoons breakfast was demolished before kick off and in between the two games we dragged Katie along to the excellent GBG listed Coach & Horses.
Wellingborough is a large market town in Northamptonshire, situated on the north side of the River Nene, originally named "Wendelingburgh". The settlement was established in the Saxon period and is mentioned in the Domesday Book under the name of "Wendelburie". The town was granted a royal market charter in by King John of England in 1201. (population almost 50,000) 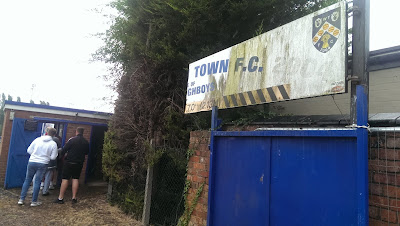 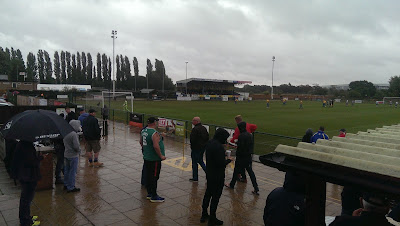 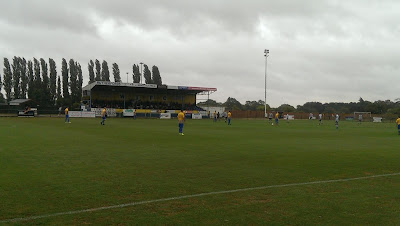 The current Wellingborough Town was formed in 2004 after the original club, dating back to 1867, had folded two years earlier. The Doughboys comeback began in the Northamptonshire Senior Youth League, before rejoining the UCL the following season. The club finished runners-up in Division One in 2005–06 and returned to the Premier Division.


The Dog & Duck has a classic style main stand, with elevated seating decked out in the yellow & blue club colours, topped off with the team initials on the back wall. The rest of the ground is open, with the dugouts on the opposite side to the stand and a section of terracing behind the goal, which runs down from the clubhouse at the entrance. There is also a club shop hut next to the main stand and floodlights running down both sides. 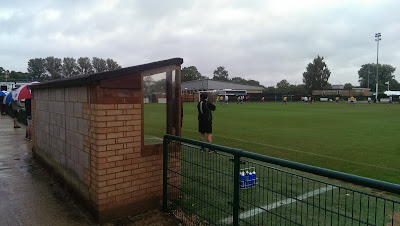 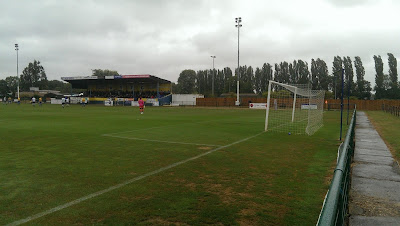 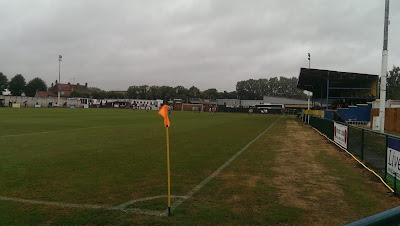 After a close knit first half the Doughboys took control after the break, to record a convincing 3-0 win over Peterborough North Star. They took the lead early in the half when a corner kick was met by substitute Freitas who headed in off the post, then doubled their advantage when Adam Speight’s strong run through the defence was finished off in style. They were three up just before the hour mark when a Lloyd Buckby daisycutter from 20 yards, somehow slipped under his body and into the net. 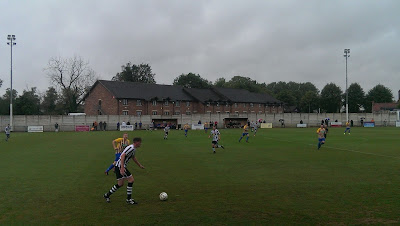 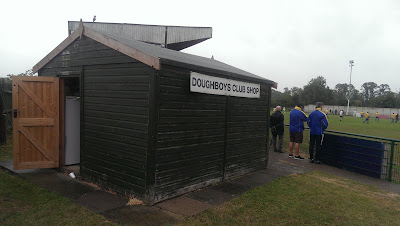 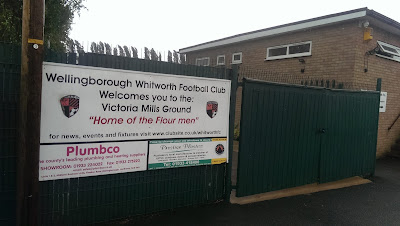 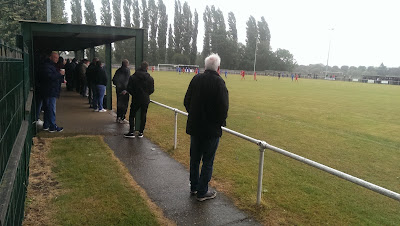 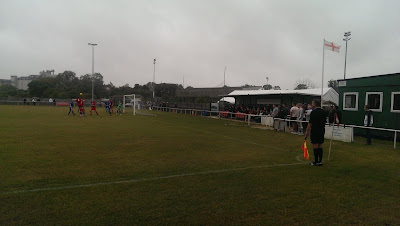 Whitworths Football Club were formed in 1973 following the disbanding of Wellingborough Ideal Clothiers Football Club. The majority of the Clothiers team were also playing for the Victoria Millers Sunday team and switched to Saturday’s to form a new club.

The club played in the Rushden and District League, the East Midlands Alliance, before getting the ground up to standard to join the UCL in 1985. The Flourmen have finished runners-up three times and won the division without losing a match in 2006–07. This is their second season in the Premier Division after surviving relegation on goal difference last term. 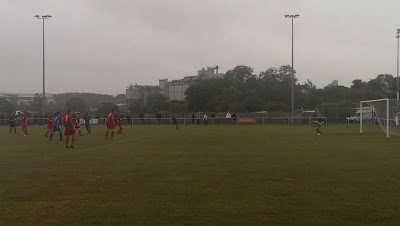 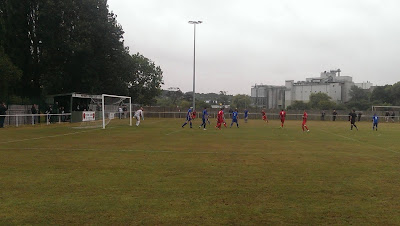 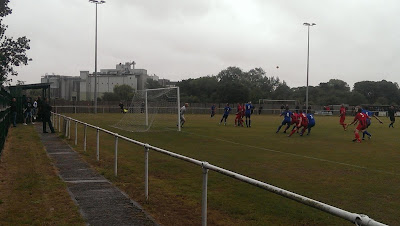 The Victoria Mill Ground is just a wayward goal kick away from the Dog & Duck. The ground is quite tidy affair, with a standard main stand at the entrance behind the goal, and sections of cover on all three sides. The shelter at the far goal is topped off with the club moniker on its facade.

Another three-niler in Wellingborough, but this time it was the away team which came up trumps. The Flourmen faced Cogenhoe United who took control in the first half with Montel Dore connecting with a right wing cross on 14 minutes, then just before the interval Ryan Dove tapped in at the far post.
Confirmation of the three points were confirmed from the penalty spot, with Dove grabbing his second to seal the victory on 82 minutes. 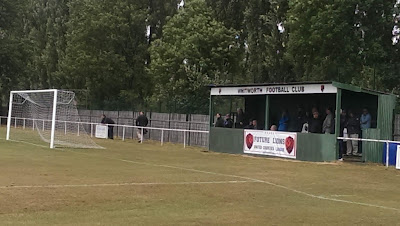 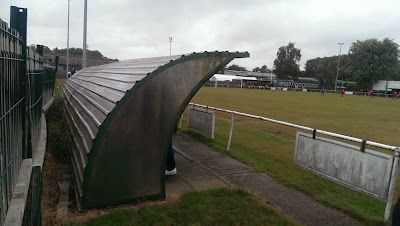 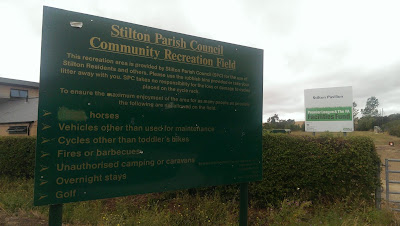 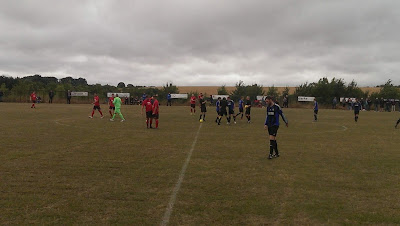 Before the last match in Stilton, me and my Gooner mate called for a few sherberts in Woodley, Oundle and Digfield to arrive just as the players entered the field.

Stilton lies south of the city of Peterborough in Cambridgeshire, on the old Great North Road, found just south of Norman Cross by the A1(M), The village lies 70 miles north of London and was once an important coaching stop in the days before motorised transport. Listed as Stichiltone or Sticiltone at the time of the Domesday Book the name Stilton means "village at a stile or steep ascent" (population almost 2,500)
The village famously gave its name to Stilton cheese. Previously the most widely accepted explanation was that the cheese came down to be sold at the Stilton coaching inns, however subsequent research has led to claims that the cheese did originate in the village in the late 17th or early 18th centuries, before any credentials of its production in Leicestershire 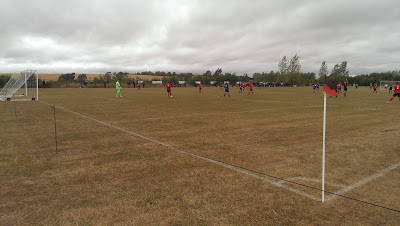 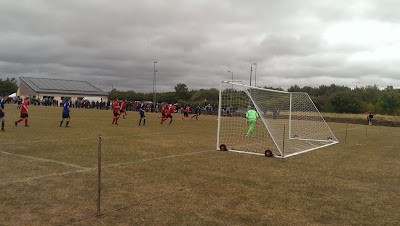 Stilton United were formed in 1920, having played in two different pitches in the village before a nomadic period from 2003, playing “home” games in Peterborough and Yaxley.

United were PDFL Premier League champions in 1999-2000, but the upheaval resulted in demotion to Division 5. The club rebuilt and eventually climbed back to the top division in 2011. The club once again took demotion in 2017-18, this time down to Division 2 after folding their reserve side.
So after 15 years football has finally come home for Stilton United, following a 5 year project initiated from the Parish Council, with the aid of the Football Foundation, various significant funding and a grant from the Premier League.
The Stilton Pavilion isn’t just a base for the football club, but caters for the community for cultural and social events. The pitch is behind the pavilion which is still a work in progress, but is enclosed on three sides with a skate park at the entrance.
The Division 2 fixture against Cardea was a good game to finish off the weekend. The hosts went two goals up with Kyial West scoring each side of the break, but Cardea drew level with two goals in five minute,s through Mike Dandrilli and a long distance effort by Aaron Yeoman. The comeback seemed to give Stilton a kick up the backside as they regained the lead minutes later through Lewis McManus, and a superb volley by West saw the number nine complete his hat-trick and complete a dream start back in the village. 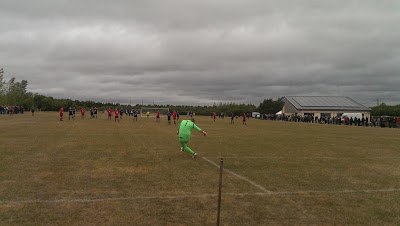 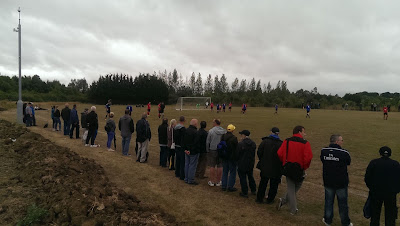 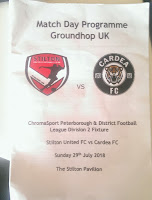 #Heedhopper
The Katiemobile pulled up outside Gallowgate View at 10.20pm. Many thanks to Katie & Lee for being great company (as always) and to Teddy and Snowy Wallace for being well behaved in the back of the car, so I could have a nice kip!  Also… cheers! to Mark for the bevvy hunting and Groundhop UK for putting on another good weekend.
Spondoolicks
Wellingborough Town - Admission £6 Programme £2 Pin badge £3
Whitworth £5/£1/£3 Stilton United £4/£1 pin badge from Terry £3