Saturday 28th July 2018
My competitive football season got underway with the annual Peterborough & District/United Counties League Groundhop. I set off on the X1 bus at 8.15 for the thirty minute journey to Houghton-le-Spring to meet Katie & Lee. We swerved the first Groundhop fixture at Whaplode Drove for a later start (and a lie in) hitting the road at 9am and arriving at our first match at 1 o’clock.
617. Tydd St Giles Community Centre
Tydd 2-3 Moulton Harrox
Peterborough & District League Premier Division
1.30pm ko 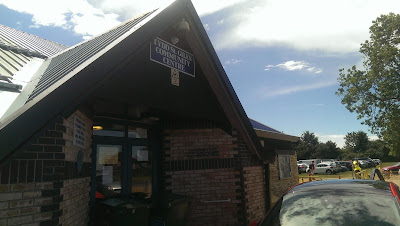 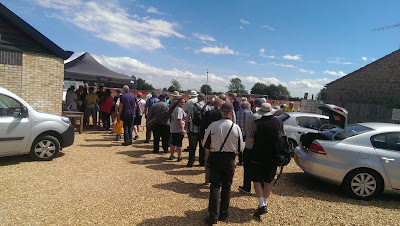 Tydd St Mary and Tydd St Giles are villages in the South Holland district of Lincolnshire, recorded in the Domesday book as Old English “tydd” meaning ‘shrubs or brushwood’. Tyde St Marys has two medieval boundary crosses, at Manor Hill Corner which is Grade II listed, and the scheduled monument White Cross at the western edge of the village.

The original Saints formed in 1973 playing in local leagues at the Memorial Park in Tydd St Mary. The club moved from the Boston League to the PDFL in 2012 and have achieved 5 promotions in six seasons to reach the Premier Division. Last spring the club relocated across to Tydd St Giles to become Tydd FC. 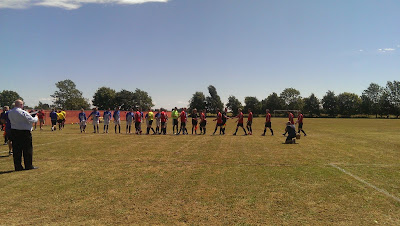 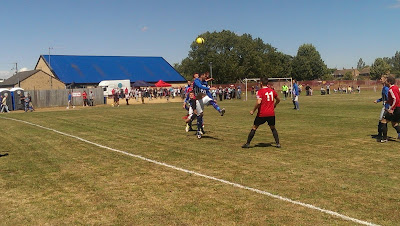 The village pitch was cordoned off for the event with gazebos set up for refreshments and random chairs supplied for the ‘hoppers. The players use the community centre facilities and the pitch is roped off on all sides. The ground isn’t up to Step 7 status yet, but they were giving special dispensation for this Groundhoppers event.

Tydd faced Moulton Harrox, their opponents taking the lead on the half hour through Ian Bradbury. The visitors took command after the break with a brace from Joe Townsend, firing in at the far post before heading home from a corner kick on 57 minutes. The saints quickly replied with a fierce long throw towards goal, taking a deflection on route, with Jake Clitheroe claiming the touch. With time running out they were awarded a penalty, which Clitheroe despatched but it was too late to pinch an unlikely point. 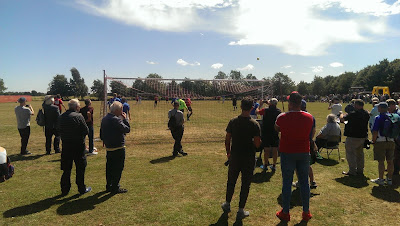 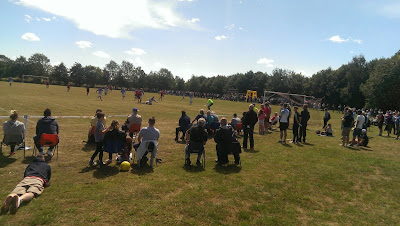 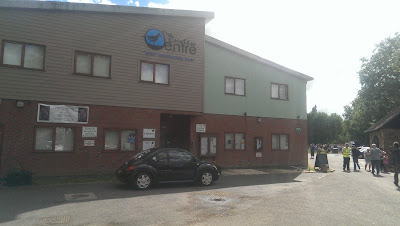 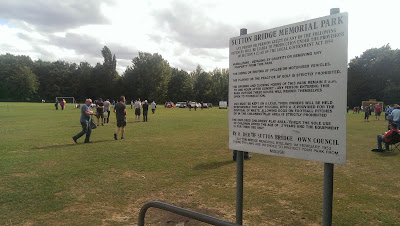 Sutton Bridge is in South Lincolnshire close to both the Norfolk & Cambridgeshire borders. Sutton Bridge United reformed in 1984, having originally been founded in 1909. The club have played in local leagues and this is their third spell in the PDFL. 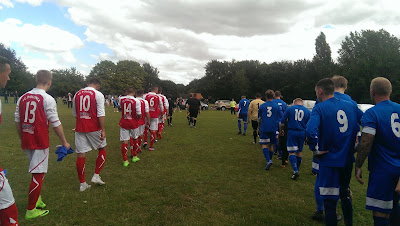 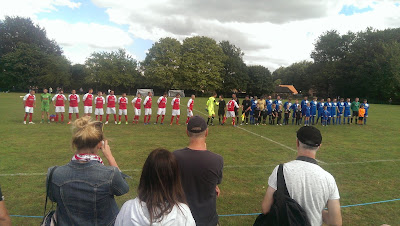 The team faced Peterborough Polonia who had a few supporters amongst the crowd of Groundhoppers, including one enthusiastic drummer. (well he wasn’t a drummer per say, he didn't have any rhythm, just basically brayed the fuck out of it!)Those visiting fans saw their side go a goal behind after 20 minutes, when the ‘keeper picked the ball up just outside the penalty area, which earned him a yellow card. From the resulting free kick, Joe Sutton curled a lovely shot around the wall into the corner of the net.

The Polish side turned the game on its head with Piotrek Stepien tapping in at the far post, before a good finish by Dorian Janicki made it 1-2 at half time, which was the cue for the drummer boy to go completely ape shit on his drum. During the second half some young lassie took offence to the drummer, trying to wrestle his instrument from him, before punching the skin and breaking it. The club security had to intervene to break up the fight, apparently started because the din was putting off the home goalkeeper.
Jack Fowler fired Sutton Bridge level on 56 minutes before a hat-trick by Matthew Eaton including two penalties each side of the heavy rainstorm, one of which saw ‘keeper Bialoskorka receive his second yellow card. Wojtowicz grabbed a late consolation for Polonia, which wrapped up a fixture which had everything… 8 goals, a red card, a thunderstorm and a bit of aggro, so tremendous value for four quid! 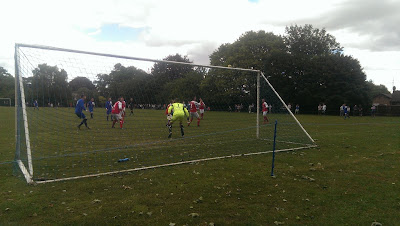 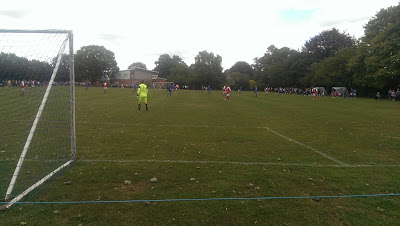 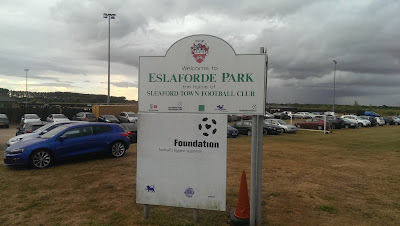 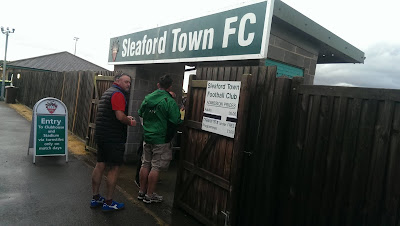 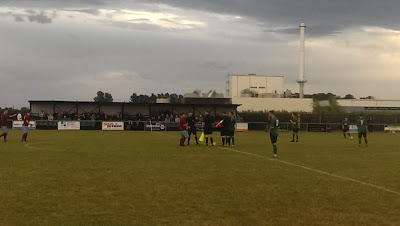 Sleaford is a market town and civil parish sandwiched in between the Lincolnshire neighbouring towns of Grantham and Boston, and south of the city of Lincoln.

Sleaford Town were founded in 1968 joining the Lincolnshire League, which they finally won in 2003–04, the title win gaining the Greens promotion to the United Counties League. After leaving their previous ground, Sleaford played three seasons at RAF Cranwell, but despite winning the Division One title in 2005–06, they were denied promotion until their new Eslaforde Park ground was ready. The following season, they finished runners-up and stepped up to the UCL Premier Division. 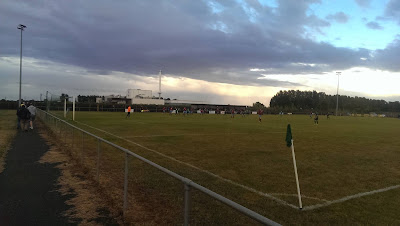 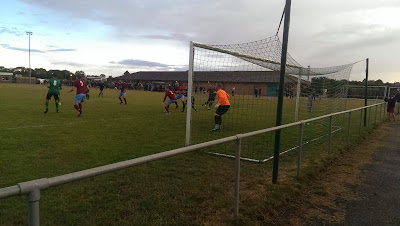 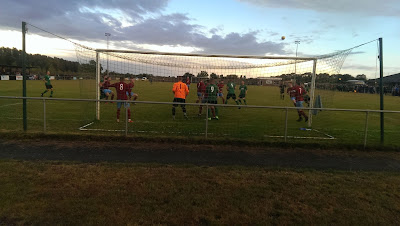 The ground has a standard main stand, decked out in green seats on the far side with a small covered enclosure behind one goal. The clubhouse and changing rooms dominate one side, with the dugouts in front of the building.

The Greens opened their campaign against Deeping Rangers and were quick out of the blocks making a positive start in the opening period. However it was the visitors who struck first with Michael Simpson receiving a through ball and firing in from 12 yards. That turned out to be the main highlight of the game, with both sides huffing and puffing but a lack of any real composure in front of goal saw neither ‘keeper really tested. 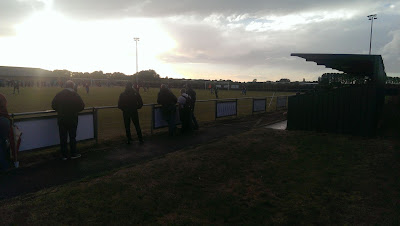 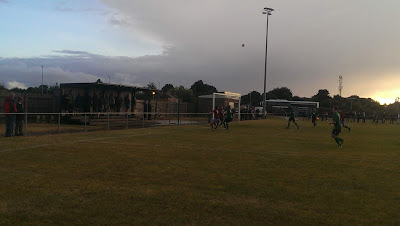 #HeedHopper
After the match I headed into Sleaford with Mark Wilkins to tick off some GBG pubs. We then made our way back towards our digs in Long Sutton, calling at Donington, Bicker and Swinehead before crashing out with a kebab compass at the Crown & Woolpack for our overnight stay, before part 2 ofthe ‘hop on Sunday.
Spondoolicks
Both PDFL fixtures admission £4 and Programme £1.
Sleaford Town £6(didn't buy a programme)
Pin badges purchased from Terry's Badges £3 each.
on July 30, 2018
Email ThisBlogThis!Share to TwitterShare to FacebookShare to Pinterest
Labels: Deeping Rangers, Moulton Harrox, Peterborough Groundhop, Peterborough Polonia, Sleaford Town, Sutton Bridge United, Tydd