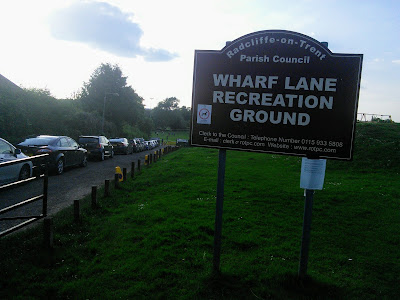 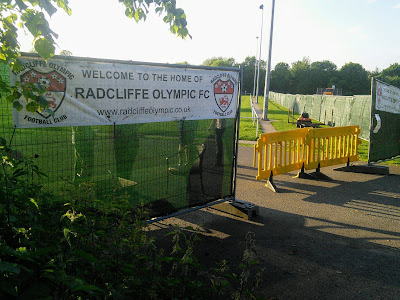 Radcliffe-on-Trent is a large village and civil parish in the Rushcliffe borough of Nottinghamshire. (population over 8,000)
The village name derives from its location on the River Trent, where there are dark red cliffs on the south river bank, with "Rad" being the Old English word for red.

Radcliffe Olympic formed in 1876 (the third oldest club in Notts)


Highest placed finish is 5th in their debut season. 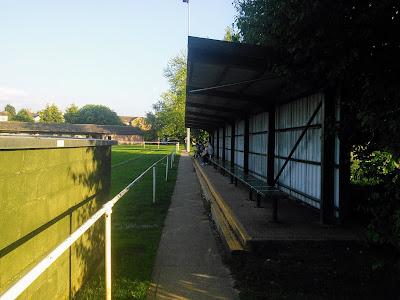 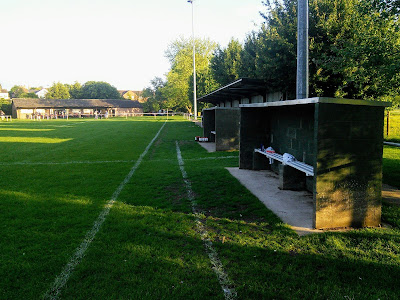 
The ground has a covered stand running up one half of the pitch towards the dugouts. The stand has a single bench running full length. The changing rooms and tea bar are behind the goal, which has a few chairs at the front under the overhanging roof. The pitch is fully railed off with three floodlight pylons on each side. The Recreation Ground is down a slope off Wharf Lane, where you could easily watch the match from the park on top of the hill, but obviously that wouldn’t count! (see bottom pic) 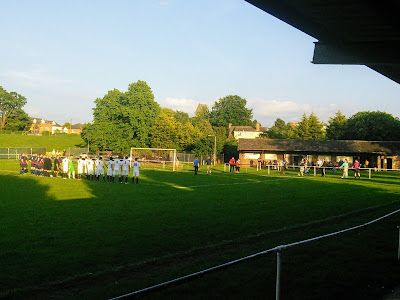 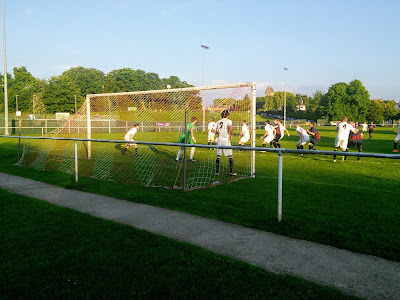 The East Midlands Counties League season was wrapped up at the beginning of the month, apart from this outstanding fixture which was ordered to be replayed. The original game was abandoned due to an horrific injury with the home team leading 2-1 with just ten minutes left.  I was expecting a typical end of season game, but it turned out to be a feisty affair with obvious bad feelings over the rearranged match.
The hosts raced into a two goal lead courtesy of an own goal and Sam Adams firing home from the penalty spot on 35 minutes. The Shiners finally got into gear before the break with a Tommy Leighton penalty and Warren Hatfield heading in a free kick at the far post. At half time the three of us gave our predictions on the final score and we were all agreed that it would finish 3-3, which proved to be correct.
Rad regained the lead when Liam Smallwood scrambled home just before the hour mark, but their chances of wrapping up the three points wasn’t helped by the dismissal of their centre-forward for two yellows, quickly followed by their irate manage being sent to the stand for his reaction to the decision.


The equaliser arrived in the 82nd minute when the ball fell nicely to Leighton on the edge of the box, who produced a neat volley to secure a point, which sees his side finish league runners-up to champions West Bridgford. 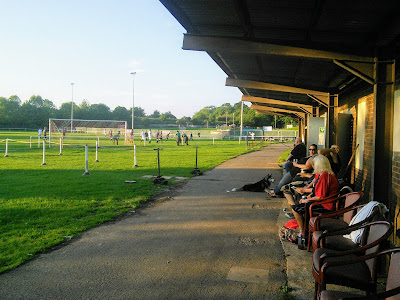 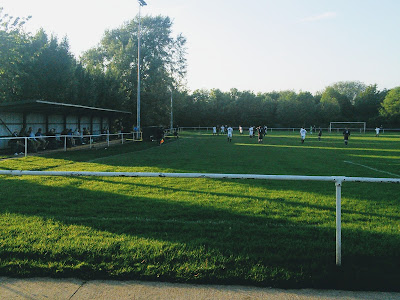 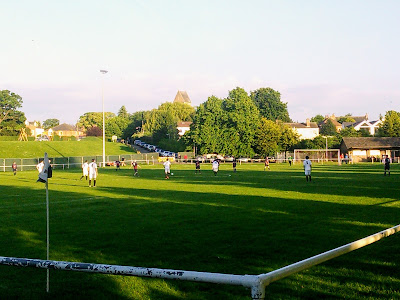 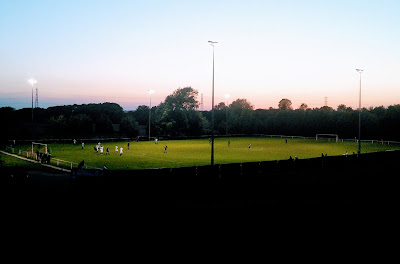 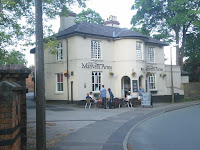 This was a nice bonus match/new ground for Katie, Lee and I, as we headed off to Notts at around 2pm with Katie taking the wheel in “Blossom”. We stopping off in Bingham for a drink at the Waggon & Horses, with bait partaking at The Butter Cross, before the short drive to Radcliffe-on-Trent.
The ground is found in the heart of the village with its oldest pub - The Manvers Arms on the corner of Wharf Lane, where we had time to call inside for a pre-match bevvy.


The return journey saw me arrive back at 100FgC HQ at 12.45am, the late homecoming worthwhile after adding an unexpected extra ground to this season’s list.
on May 25, 2017
Email ThisBlogThis!Share to TwitterShare to FacebookShare to Pinterest
Labels: Radcliffe Olympic, South Normanton Athletic