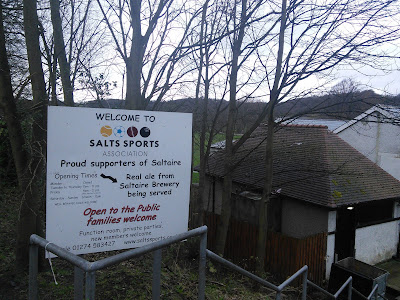 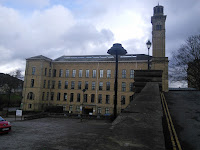 Saltaire is a Victorian model village built in 1851 by Sir Titus Salt, a leading industrialist in the Yorkshire woollen industry. The village name is a combination of the founder's surname and the River Aire. Salt relocated five separate mills from Bradford to a new large textile mill near Shipley, handily placed beside the Leeds & Liverpool Canal and the railway. The new village also provided his employers with a better living and working environment. Saltaire was designated a World Heritage Site by UNESCO in 2001 and an Anchor Point of the European Route of Industrial Heritage 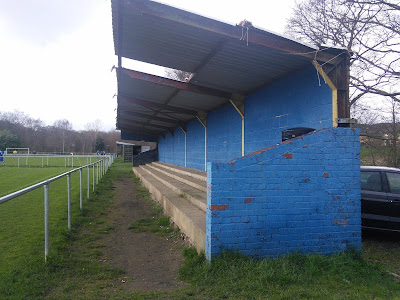 Sir Titus Salt formed the football club during the 1930’s and provided the Salts Sports Ground for his workers. The history of Salts FC has been lost in the annals of time, but there’s records of the club playing in the Yorkshire League between 1955 and ‘65 and playing in the FA Amateur Cup during the 1950s.
In 2009 the club merged with Shipley Juniors and now run four seniors sides and two Sunday teams, as well as junior teams at all age levels with over 500 players on the club roster .The Alpaca currently play in the Premier Division of the West Riding County Amateur League, after finishing runners-up in Division One in 2011-12. 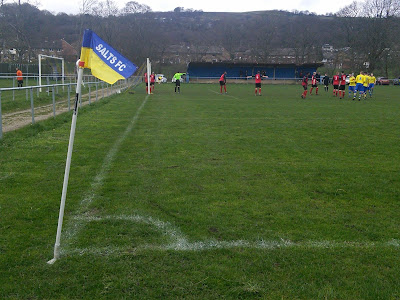 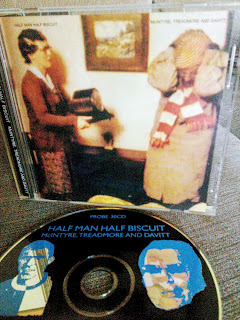 The ground is found along the riverbank and canal, with tennis courts, bowling green, the clubhouse and the cricket pitch before you come to the football ground at the far end. There is now two full size pitches at the ground to accommodate the growing club, so when I arrived  there was already a match taking place at the far pitch, with the 3rd XI playing AFC Colne in the League Cup. Each pitch has a covered enclosure on one side, with the new changing room block and tea bar facing the ground closest to the cricket field where the 1st XI play. Because of the grounds close proximity to the River Aire there is a big net pitchside to retrieve any wayward balls out of the water.

The ground was famously used as the setting for the home of Barnstoneworth United in the fictional BBC TV series Ripping Yarns, which starred Michael Palin. In the episode ‘Golden Gordon’ the once successful Yorkshire Premier League club, had falling on hard times, now getting gubbed in every game. One of their fans, Gordon Ottershaw (Palin) comes home after every defeat and smashes the furniture in fury.(we’ve all had this urge) After an 8-1 defeat by an elderly team ("Eight One - Eight bloody One! - And even that were an own goal!") it’s decided that the club will be disbanded and the ground sold to a scrap dealer, so it’s Gordon endeavour to keep the club alive.
The episode is also immortalised in the Half Man Half Biscuit album ‘McIntyre, Treadmore and Davitt’ which uses a still from the show as the album cover. 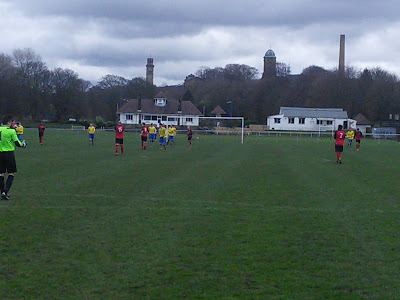 A well balanced match with not too many clear cut chances was settled twenty minutes from time. A spell of good pressure from the visitors saw them hit the crossbar before a free kick from the left was headed home by Aiden Schofield. On 78 minutes a scrap broke out which resulted in the Lower Hopton big number nine receiving his marching order, after throwing a punch. Salts couldn’t take advantage of the extra man as the visitors held on to gain the three points. 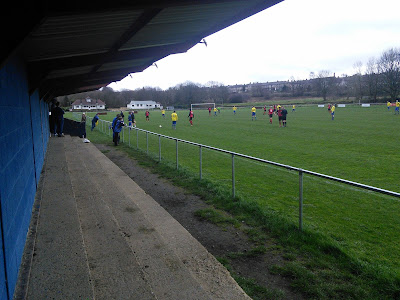 #HeedHopper
The 0748 Transpennine service from Newcastle to Leeds was the first of eleven trains I boarded, spending the morning taking advantage of my £7 Northern Trains Rail Rover to tick off a few Wetherspoons pubs in Batley, Morley and Bramley.
I headed across to Saltaire for 1 o’clock and enjoyed a nice wander around the village, with refreshment breaks at Fanny’s Ale & Cider House, Cap & Collar and the impressive ‘Hop’
After the match I had time to call along to Bingley for a drink, plus a few in Shipley before heading back to Leeds for the 1818 train back to the Toon. This was my first solo jaunt since October, so I made sure I enjoyed an ace day out, ticking off 5 new ‘Spoons, 3 GBG pubs and supping 8 new ales. Of course the main attraction was the final destination, as Saltaire is a splendid place and is somewhere that I’ll definitely revisit sometime in the future.

Thank you Shaun for an excellent review of our football club and surrounding area. I am glad you enjoyed your day out and you will be very welcome back any time and you must try one of our real ales in our Clubhouse. Andrew Eastell (General Manager)