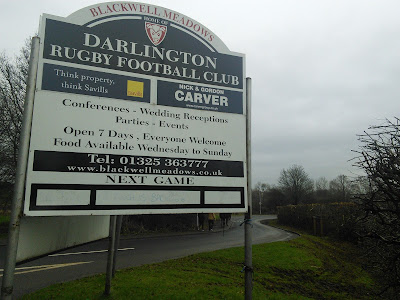 After playing 13 miles away at Heritage Park in Bishop Auckland, Darlington ended their four year exile from the town on Boxing Day with their first match at Blackwell Meadows, as an all-ticket capacity crowd saw a winning start for the Quakers with a 3-2 victory over FC Halifax Town.
The groundshare with Darlington Rugby FC was announced in December 2013, with the original plan to expand the existing ground to a 3,000 capacity. The cost has been shared between both clubs, with improvements to the clubhouse, a covered terrace (known as the “Tin Shed”) new dugouts and a stand at the far side. Future developments will see further terracing at the top goal and the stand eventually extended pitch length. 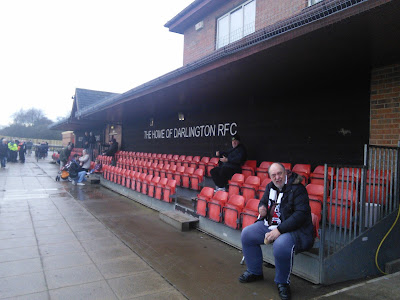 Following the club’s administration, reformation as Darlington 1883, community ownership and leaving the costly white elephant Darlington Arena in 2012, the new dawn has saw them go from strength to strength.
The new club were placed four divisions from the Conference and now they are just one step away from a return. -
2012-13  Northern League Division One Champions (122 points 145 goals)
2013-14  Evo-Stick Division One North runners-up (lost play-off semi final to Ramsbottom United)
2014-15 Evo-Stick League Division One North runner-up (won play-offs)
2015-16 Evo-Stick Premier League Champions
The Quakers are currently amongst the play-off positions in the National North as they look for a fourth promotion in five seasons. 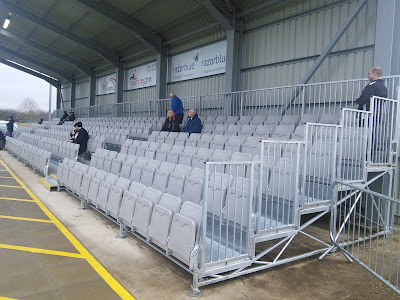 Darlington were caught with an injury time sucker punch as they suffered a first defeat at their new home. Nuneaton took the lead just before the hour mark when Gateshead loanee Reece Styche was tripped by Brown in the box, with Joe Ironside easily slotting home the spot kick.
Darlo looked to have salvaged a point in the last minute when substitute Luke Syers nodded in a Gillies cross, but they were undone as they pushed for the winner. The referee added an extra 6 minutes to proceedings largely due to time wasting by the Nuneaton ‘keeper Christian Dibble. In the second extra minute a long ball found Jordan Nicholson who outran the home defence before firing in with a powerful left foot shot.
A disappointing performance from Darlington but Nuneaton go from strength to strength, this victory being their seventh win on the bounce. 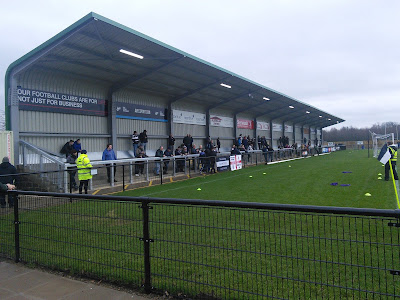 Amongst the 2313 in attendance I bumped into 100FgC#64 Squad member Richard Panter who had travelled up from Leicester with Notts based Sad Hopper(aka Neil) I also spoke to Facebook legend John McClure sporting his 100FgC hat, plus Squad#4 Jack Warner and John Main were also among the crowd. 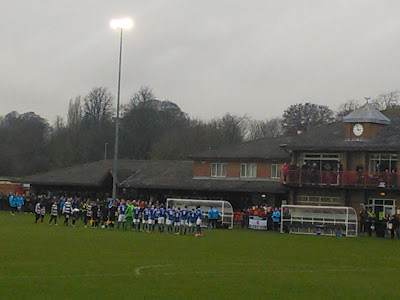 What is the point of the seats by the dressing rooms or for ground grading, do you not have to see the game from the seats - Shambles!!

The "Tin Shed" isn't any Tin Shed, its the original one from Feethams which stood derelict for years and was then rescued when the ground was finally bulldozed a couple of years ago, adding it to that small list of structures that have stood at more than one ground!