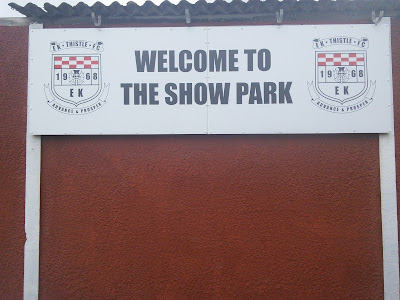 East Kilbride is the largest town in South Lanarkshire, which lies on high ground on the south side of the Cathkin Braes, about 8 miles southeast of Glasgow. East Kilbride grew from a small village with less than one thousand inhabitants to Scotland's first new town in May 1947, which now has a population of almost 75,000 amongst its subdivided residential precincts.
The town takes its name from St Bride, an Irish saint who founded a monastery for nuns and monks in Kildare, Ireland in the 6th century. Dál Riatan monks introduced her order to Scotland. 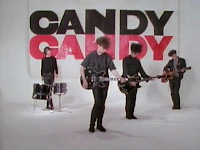 Birthplace of Jim and William Reid who formed The Jesus & Mary Chain in 1983. I saw the band for the first time in over 20 years in February 2015, when they performed their debut album Psychocandy live. They were just as loud with an immense frenzy of feedback as when I saw them back in the day, so much so that my ears were bleeding for a week! 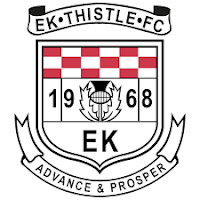 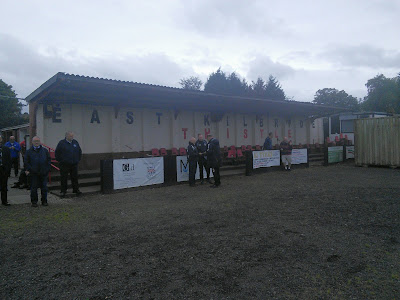 Capacity 2,300
The ground has one main stand which is filled with school type chairs, although the enclosure is mostly redundant as the view is blocked with containers and is set back from the pitch.
The changing rooms are in the corner next to the paying entrance and refreshment bar. The dugouts are at the far side, with most of the ground made up of grass banking. 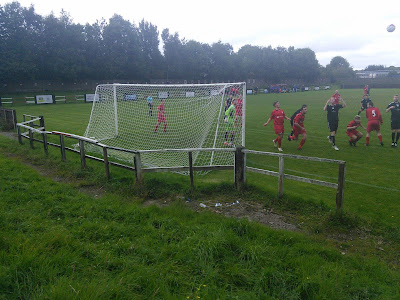 A cracking game which saw the lively Carluke striker Ian Watt twice give his side the lead in the first half, but The Jags pegged them back with a fabulous volley from Phil McCabe and Andy Gibson levelling with just 24 minutes gone.
The second half was terrific end to end stuff with the decisive goal coming from Andy McFadden, who finished off a breakaway move with a curled effort from the left into the far corner. An entertaining encounter and full marks to both teams for going shit or bust throughout the whole ninety minutes.

Spondoolicks
Admission £5
Programme £1(The Jag Mag ...what an ace name for a programme)
Golden Goal £1
Coffee £1 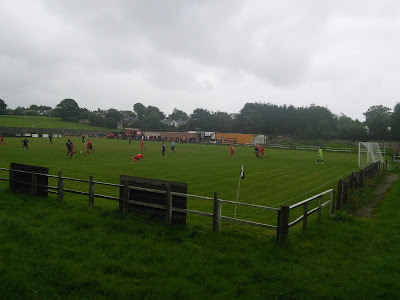 Honest Paul accompanied me for my latest trail of the Scottish Holy Grail. We reached Glasgow at 11.15 and on arrival had a 'Spoons breakfast in the Sir John Moore on Argyle Street. Mark Wilkins had also travelled north, so he met us for a pint before the three of us went our separate ways, as Paul had a tobby around Glasgow and Mark headed to Wishaw Juniors.
When I arrived in East Kilbride I called into the town centre for a pint in the Hay Stock, before getting to the ground around 20 minutes before kick off.  My arrival at Showpark was met with suspicion, as I was vaguely accused of being up to no good as I took the picture, as you can see at the top of this post. (I’ll reveal more in the book)
We all met up again later on in The Horseshoe Bar around 4.30pm. After a few bevvies I introduced Paul to the fab Laurieston bar on Bridge Street, before we caught the train to Carlisle. We had plenty of time to call into four lively pubs in the town before catching the last train home.
Another enjoyable day out and now there's just two clubs left on my Scottish Junior odyssey at Irvine Meadow and Arthurlie, so fingers, toes and whatever else crossed that the fixture gods are on my side for my next ventures north. 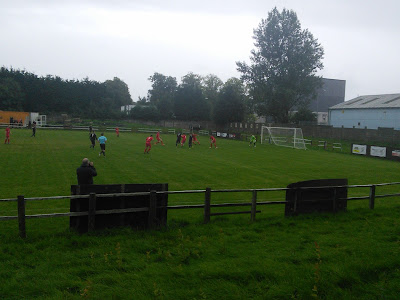 Matchday Album of 20 pictures from the Showpark.
on September 04, 2016
Email ThisBlogThis!Share to TwitterShare to FacebookShare to Pinterest
Labels: Carluke Rovers, East Kilbride Thistle