A Rush(den) and a Push

I headed south with Katie & Lee for the Peterborough/UCL groundhop, but instead of getting up in the middle of the night for the first match at 10.30am, we worked out an alternative hop finishing off at Rushden & Higham for the final game at 7.45pm. I caught the bus down to Houghton-le-Spring, for the pick-up and we were on the A1 by 9am on route for our first of 3 matches in the market town of  Dronfield in north-east Derbyshire. 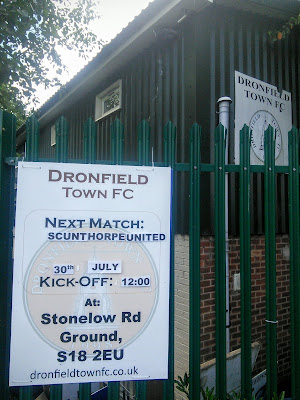 The town is situated in between Sheffield and Chesterfield, with the Peak District National Park 3 miles to the west. (Population over 21,000) It's the birthplace of former Huddersfield Town & England football captain Roy Goodall, current international and Chelsea defender Gary Cahill, plus Rick Allen, the one-armed drummer from Sheffield based dicky-flinging-rockers Def Leppard. 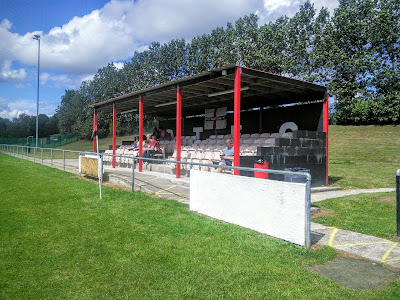 There’s records of various clubs using the Dronfield Town name, dating back to the 1860s, but the current club were formed in 1998, from junior team Dronfield Sports AFC. The club’s adult team Dronfield Cavaliers took the “Town” name in 2000 and wear a red & black kit. The club have worked their way up from the Hope Valley League, Midland Regional Alliance and Central Midland League to reach the Northern Counties East League Division One in 2013. 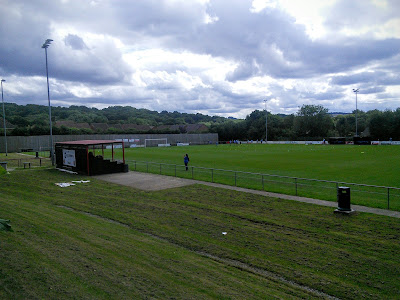 Stonelow Road Ground is hidden within a house estate behind the Aston Coal cricket club ground. There is a small stand which sits on the halfway line filled with 80 light beige seats. The dugouts are on the opposite side and the rest of the ground is open. The clubhouse, changing rooms block is at the entrance, with seated furniture in between the refreshment bar and stand. It is currently known as The HE Barnes Stadium and has an overall capacity of 500. 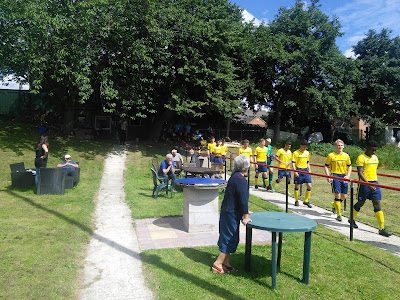 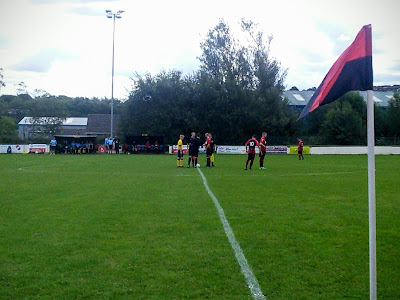 Dronfield Town faced Scunthorpe United U-18 in what was a good workout for both teams. After the visitors failed to convert a few easy chances in the first half they took the lead in the 54th minute when a neat through ball from McMichael found Jack Dyche who produced a confident finish. The equaliser arrived with twenty minutes remaining when #10 fired in with a skilful turn and shot, but they were soon behind again, when a strong run and calm finish from Lewis McMichael proved to be the winner. 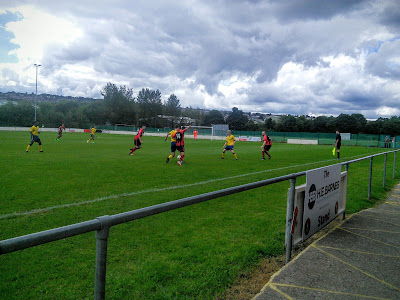 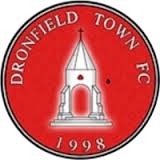 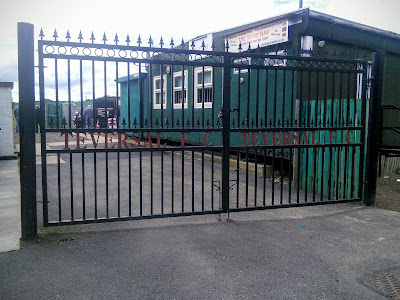 Our next stop was 17 miles away in the small village of Teversal in the Ashfield district of Nottinghamshire, which is located 3 miles west of Mansfield and close to the Derbyshire border. This remote village is a former colliery site and was the home of the fictional Lady Chatterley in the novel Lady Chatterley's Lover by D. H. Lawrence. 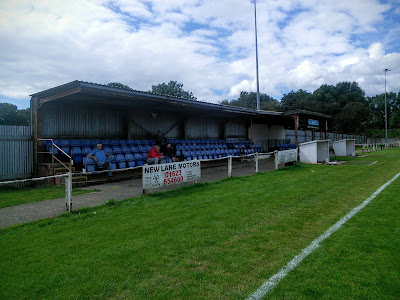 Teversal Miners Welfare formed in 1918, playing at the same Carnarvon Street ground which is used today. The club eventually turning into a youth team, before the current senior club re-established itself in 1986, under the name of M W Teversal. Ashfield District Council took over the ground after the colliery closed in 1989, becoming the Teversal Grange Sports and Social Centre. The football club also changed their name to Teversal Grange, eventually dropping the surname in 2000.
Teversal joined the Central Midlands League, before stepping down to the Nottinghamshire Alliance in 1991, returning to the CML  after a spell of seven years. Promotion to the Supreme Division in 2001, followed by a third place in 2004–05 was enough to merit a further promotion to the Northern Counties East Football League Division One, where they have played since. 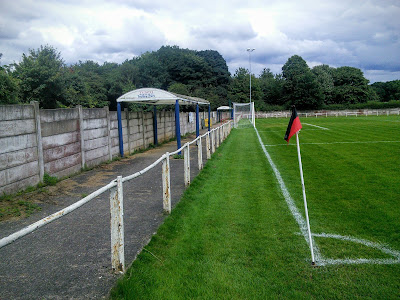 The Carnarvon Street ground shares its car park with the local cricket and bowls club and is next door to the Teversal Centre. The ground has plenty of character with a ramshackled stand on one side behind a pair of classic dugouts. All the amenities are near the paying entrance with standing cover provided by a pair of Tesco shopping trolley shelters at the top goal. 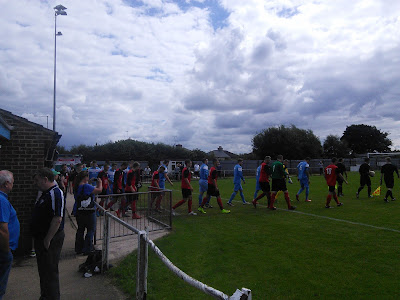 Teversal faced fellow NCEL side Parkgate in a competitive encounter, with a brace from Kurtis Bamford giving the home side victory. He was on hand to tap in a left wing cross on 23 minutes and scrambled home the winner, after Alex Lill had levelled. There was plenty of good chances created by both sides, in a match which was more like a league game than a pre-season friendly. 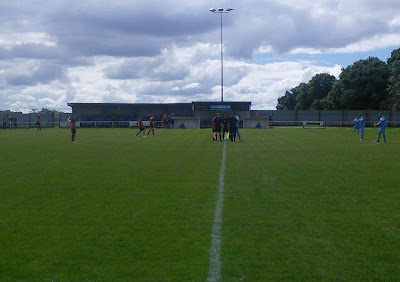 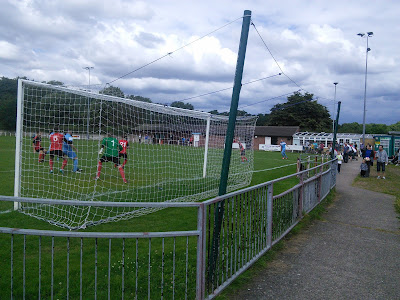 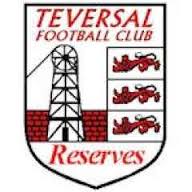 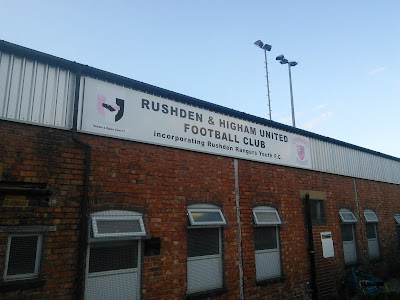 We arrived in the East Northamptonshire town of Rushden at 6.30 which gave us plenty of time to visit The Railway Inn for bait and drinks before kick off.  Rushden and Higham urban area has a population of over 36,000.  Rushden's industrial growth include lacemaking and farming, but its more renowned for shoemaking. In the mid-1900s there were well over 100 boot and shoe factories in Rushden but now only a few remain, including Sanders and Sanders,which makes boots for the British Army and several other worldwide defence departments. 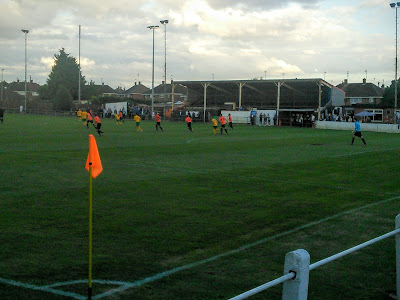 Rushden & Higham United play at Hayden Road, the former home of Rushden Town who got into bed with Irthlingborough Diamonds to form Rushden & Diamonds FC in 1992. The ground has a shallow main stand at the far side at one side of the dugouts, with open standing behind the goals and sections of terracing. The classic old stand at the entrance is no longer in use to spectators, but the changing rooms are still operative. Next to the old stand is the clubhouse, the other amenities and another bar where you pay the entrance fee into the ground. 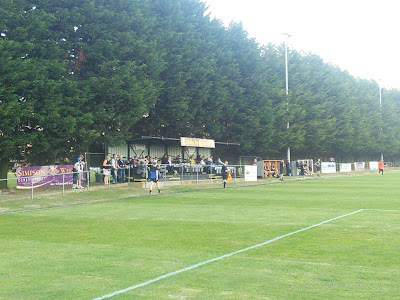 The football club in Higham formed way back in 1876 and Rushden Rangers was started as a youth football club in 1978. In 2007 the decision was made to merge the two clubs, with the new club playing at Rangers' ground in order to preserve United Counties League status. The Stadia Improvement fund assisted in the development of Hayden Road ground to bring it up to the required standard. 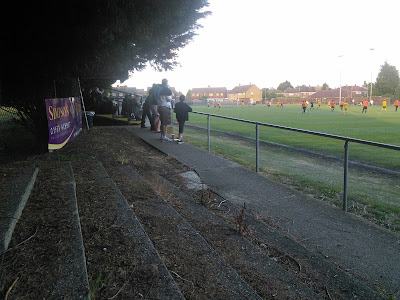 Our final game of the day turned out to be a goal fest, with visiting team Oakham United hitting seven courtesy of a hat trick from Michael Nelson, a brace from Alex Brockband and two bizarre own goals. They took a two goal lead twice within the first quarter of the game, but were pegged back with Ryan Cormack and Jed Ainge scoring to reduce the arrears. The fourth goal just before half time proved to be the killer for Rushden.The visitors bagged another three after the break and it could've been a lot more in what was a dream start to their league campaign. 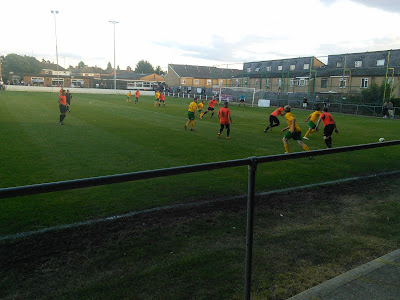 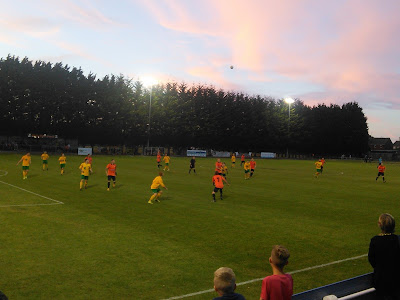 
Afterwards we headed to Wellingborough for a drink, bumping into Squad#99 Eddie Fogden, who was calling in for a pint in The Red Row before staying the night in MK. Our resting place was the Travelodge in Kettering, where we arrived at 10.50. It was here where a smashing day out went tits up, after they stupidly double booked Lee and Katie’s room, telling them they would have to go to another hotel. We dug our heels in and refused to budge and after a long wait we eventually got sorted, but there’ll be a major complaint heading their way. I’ll probably never book through Travelodge again if they are running a “first come first served” policy especially after they were happy to take £104 for both rooms off me a month ago….Bastards!
on August 02, 2016
Email ThisBlogThis!Share to TwitterShare to FacebookShare to Pinterest
Labels: Dronfield Town, Oakham United, Parkgate, Rushden & Higham, Scunthorpe United, Teversal