Following yesterday’s groundhop and a shit night’s sleep (more ammunition for my complaint) we departed the hotel at 8.30am for a ‘Spoons breakfast in Kettering, before heading south-west to the Northamptonshire village of Bugbrooke. 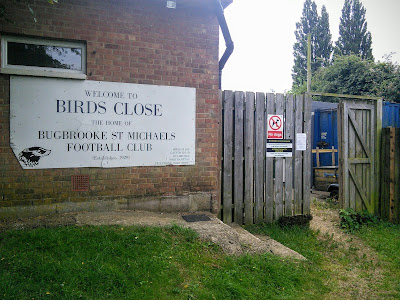 Bugbrooke St Michaels hosted the first of today’s three Groundhop games. The club was formed in 1929 taking over from Bugbrooke United who began in 1910, named after the St Michael’s and All Saints Church. The Badgers were a successful club in the Northants League and took the step up into the United Counties League in 1987. The club were Division One champions in 1998-99 but were relegated in 2002. The club also run a reserve team, an A and B team in the Northamptonshire League, as well as youth teams covering all age groups from U-6s to U-18s 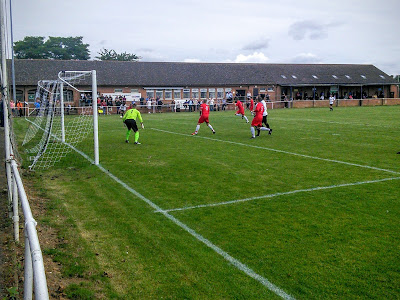 We arrived in the ground 5 minutes before kick off to be greeted by the club chairman, who give us a brief rundown of the club and told us his daughter lived in Washington, and as it's a small world, that’s the same town where Katie works. The ground has the changing rooms and impressive clubhouse in one building which stretches along over half the side of the ground. There is a overhang roof with a section of seats, with a small standing shelter at the side. The rest of the ground is open hardstanding with a pair of neat looking wooden dugouts at the far side. 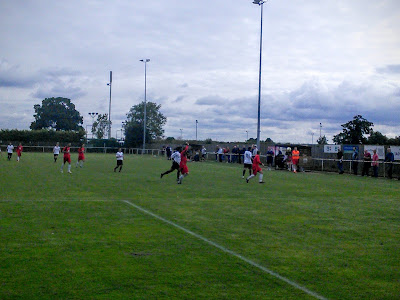 The Badgers got off to a winning start in their Division One opener with Bourne Town. The visitors took the lead just before halftime when Zak Munton was on hand to tuck away a left wing cross. A miss hit effort from McNeil found the back of the net to draw Bugbrooke level on 53 minutes, before a late winner from Reabus Noel-Richards whose luck was finally in, after earlier hitting the post and having an effort kicked off the line. 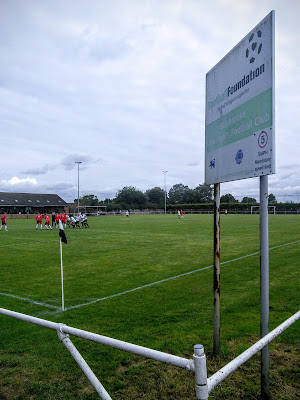 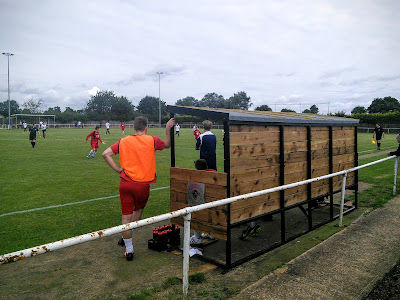 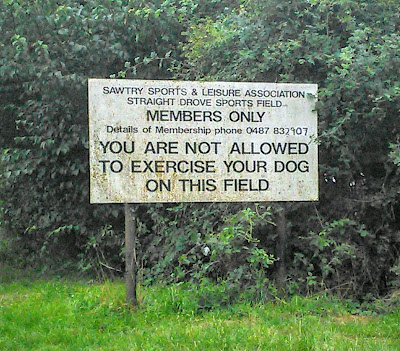 The next stop was a good hour away in the village of Sawtry in Cambridgeshire, approximately 8 miles north of Huntingdon, which is home to over 6,000 residents. The wee village embraced the event, with gazebo stalls, tombolas and a bouncy castle for the bairns which swelled the attendance to over the 500 mark. 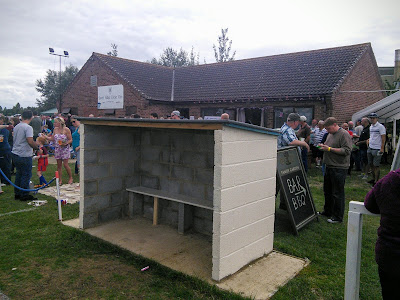 Sawtry FC first appeared prior to the war, playing on a pitch by the Great North Road, before being forced to move to a ground on Aversely Road. After the war the club joined the Huntington League using a pitch on Church Street before moving again to Gidding Road, where they enjoyed major success in league and cup. The club moved across the other side of the A1 to their current home at Greenfields, winning two promotions in the PDFL to reach the Premier League in 2012. 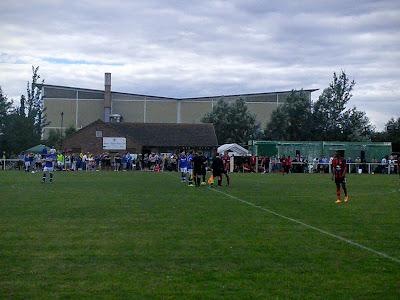 The match against Stilton United was one of those “nowts-each written all over it” affairs. The poor game gave me a chance to catch up with Mark Wilkins, the Gooch family and meet Squad#53 Rob Campion for the first time. All the action came near the end with the deadlock broken on 78 minutes with an effort from West then minutes later an almost identical strike from Simon Denning sealed the points. 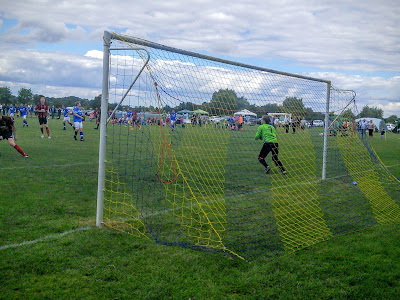 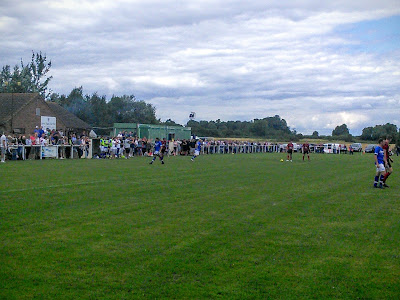 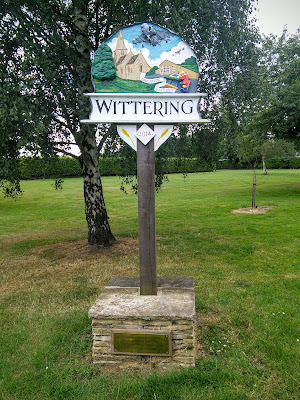 The final game of the day was in another village just off the A1 in Wittering, Cambridgeshire, which is the home of RAF Wittering which officially opened in 1924. The Central Flying School was at Wittering between 1926 and 1935, when it became a fighter base, becoming active and playing a major part in the blitz during the Second World War. 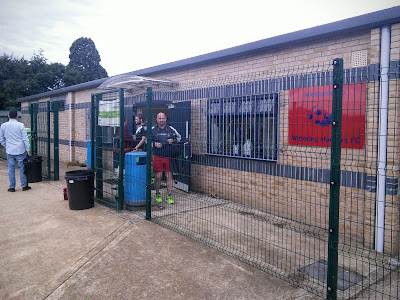 Wittering Harriers was formed as a youth team in 1995, before turning to senior level in 2011. The club have worked their way up from Division 5 of the Peterborough & District League to reach Division One, winning promotion every season, apart from last term when after a poor start they've finished in sixth place. 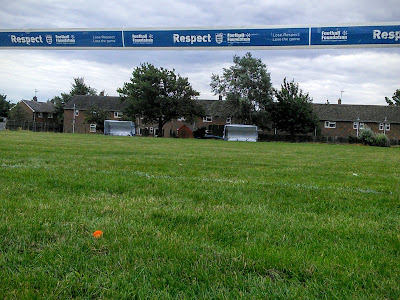 Just 24 seconds had ticked by when Ross Lockwood fired the Harriers into the lead against Long Sutton Athletic, but they quickly responded with William Oliver equalised two minutes later. Two goals before half time swung the advantage back in the home side's favour, with a superb lob by Ashley Middleton followed by Rob Braint firing in a rebound after an initial effort came back off the crossbar.
On 56 minutes Sam Cayley headed in a left wing cross, but Matty Cawthorn halved the deficit three minutes later The hosts could have extended their lead but Lee Booker missed a penalty after a foul on Middleton, however a fifth goal did arrive deep into added on time when Grant Tippett ran on from the halfway line to wrap it up. 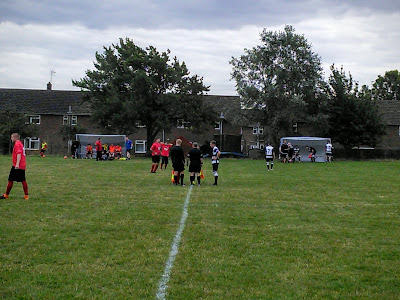 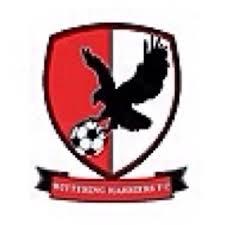 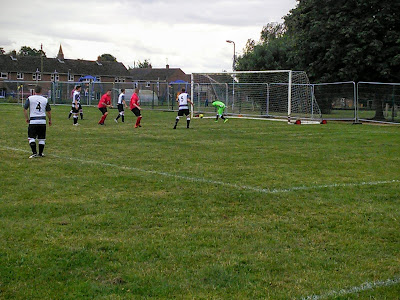 As Wittering is on the edge of the A1, the journey home took just 3 hours, so Katie dropped me off back home at 10.30pm. Another well organised event from Groundhop UK, so well done to Chris and Laurence and I look forward to attending another 'hop hopefully later in the season.
on August 03, 2016
Email ThisBlogThis!Share to TwitterShare to FacebookShare to Pinterest
Labels: Bourne Town, Bugbrooke St Michaels, Long Sutton Athletic, Sawtry, Stilton United, Wittering