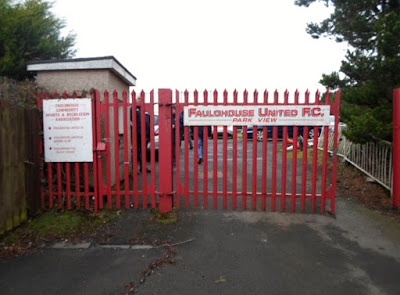 Today’s plan was to tick off another ground for my book project, with Whitburn Juniors as first choice and Arthurlie as back up. I arranged for Lee & Katie to be at mine for 8.15, then my plan was to drive straight to Livingston, to tick off the 2 JDW’s and from here we’d find out if the Whitburn game was on. If it was postponed then it was a further one hour drive to Barrhead for the Arthurlie game. I was delighted to learn that Whitburn’s opponents Blackburn United had confirmed the match had past its 9.30 pitch inspection and also Robert, who does the Twitter feed for Whitburn, posted pictures of Central Park looking in good nick.
We arrived just outside the ground at 1.20, and I had just got out of the car when I was told the match was off, coincidentally it was Robert who I had contacted on twitter that broke the news. He knew who I was and how far I had travelled, so he felt bad having to inform me that although the local referee passed the pitch earlier, when the match ref arrived he wasn’t happy with a soft patch in and around the corner flag of around 5 square metres, which he deemed unsafe for the players.
I remembered the previous evening when I was looking at the East Region fixtures, I recollected that Fauldhouse were at home and I knew it was somewhere in the vicinity of Whitburn. I asked Robert where it was and he told me it was about 7 minutes away and gave me precise directions to their ground. So we raced up the hill towards Longridge, then a sharp left along to Fauldhouse, so we arrived a good ten minutes before kick off. We didn’t have any idea who they were playing, so we entered the ground and saw there was already a decent crowd gathering as the Hoose were hosting Bo’ness United.
Although I was disappointed that yet again another chapter of my book has been put on hold, I really enjoyed my visit to Park View. The ground is quite charming, plus we witnessed an entertaining and very competitive game, played in a good and sometimes hostile atmosphere.
The return journey home went smoothly so I pulled up outside 100FgC HQ just after half six, with my 500th ground behind a Scottish Junior ground, which I was pleased about but it wasn’t the one I anticipated. 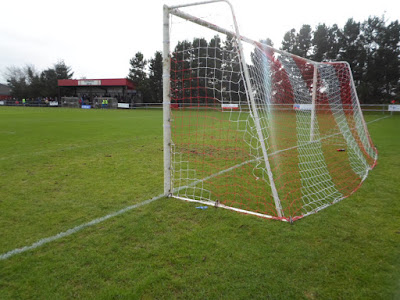 Fauldhouse is a town in West Lothian, known since the Middle Ages and up until the 19th century was called Falas and later Fallas. It is situated 11 miles west of the major town of Livingston and 4 miles south of Whitburn (Population just under 5,000)

Fauldhouse United - The Hoose were founded in 1919.
Winners of the Scottish Junior Cup in 1946 beating Arthurlie 2-0 in the final. 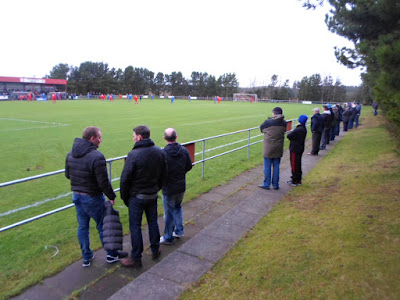 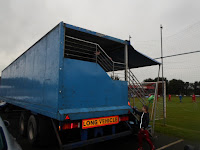 The ground has a covered terrace enclose central behind the dugouts, known as the "Coo Shed". Along this side in the corner is the tea bar, changing rooms and the clubhouse called “The Howff” which was opened in 2014. The car park is behind the goal and just last year another vehicle appeared with a stand within a lorry trailer with around 80 seats is parked directly right behind the goal. The rest of the ground is open with grass banking down one side. 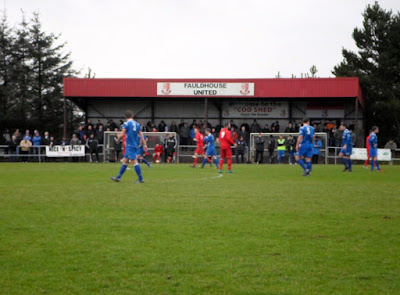 0-1 Ross Philp (26’)
Played a neat one-two inside the box and placed a precise shot into the right corner.
0-2 Darren Gribben (38’)
Swerving shot from 25 yards wrong footed the ‘keeper.
1-2 Michael Browne (58’) Penalty
Foul on Brian Ross in the box saw Browne converted the spot-kick
2-2 Jordan Love (69’)
A quickly taken free kick caught the visitors napping, as Jason Deans squared the ball to Love who fired through the ‘keeper's legs from close range.
2-3 Will Snowden (71’) Penalty
A slight trip on Michael Gemmell resulted in Snowden firing in the penalty.
2-4 Ross Campbell (88’)
Corner kick from the left was met with a good header from Campbell.
2-5 Nicky Walker (89’)
A cross from the right from Sinclair was slid in by Walker from six yards. 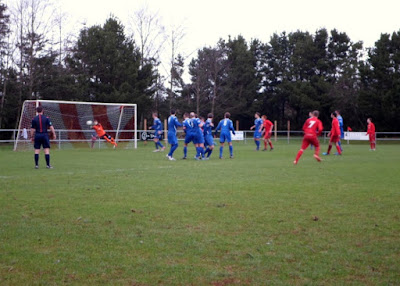 That trailer stand's worth a visit on its own. Congratulations on hitting 500.

Great report mate and well done in reaching the 500 mark!