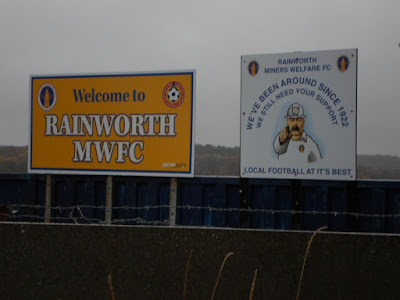 Rainworth is a former mining village between the Newark & Sherwood and the Mansfield districts of Nottinghamshire, 2 miles east of Mansfield town centre (population just under 8,000)
Former home of Ruford Colliery, sunk in 1911 and coal reached in 1913. After producing for 80 years the colliery closed in 1993.

Rainworth Miners Welfare FC  “The Wrens” formed in 1922 and play in an all white strip.

Played in the Notts Alliance, Central Midlands League (2003-2007) Northern Counties East League Division One from 2007 ... won promotion to Premier Division 2008-09, followed by promotion to Evo-stik Division One South in 2009-10. Returned to NCEL after relegation last season. 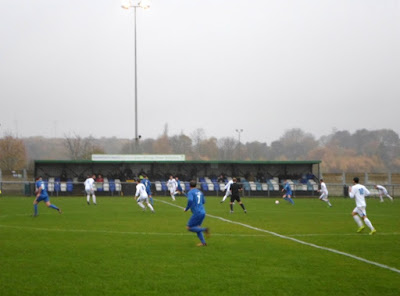 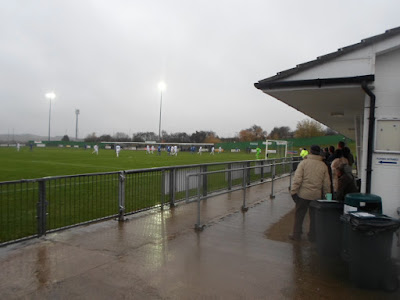 English Non-League grounds visited 240
Current NCEL grounds 20/44
Capacity 2201 with 211 seats and cover for 400.
Record attendance – 5071 v Barton Rovers, 1982 F.A. Vase semi-final second leg.
Main Stand central on one side with covered hard standing opposite next to the dugouts. Open behind both goals with additional seats added on the banking next to The Wrens T-Bar. The Gadabout
147 miles door to door
The breadknife dropped me off at Katie’s house in Houghton-le-Spring, then travelled in the Katiemobile with her and Lee down the A1 and along the A614.

1-0 Jamie Yorke (2’)
A low right wing cross from Morris picked out Yorke at the near post for an easy finish.
1-1 Callum Ward (12’)
Ward brought down in the box and he stepped up to fire home the resulting spot-kick
2-1 Jamie Yorke (23’)
Initial shot deflected and fell kindly into the path of Yorke who produced a neat finish from the inside left position.
2-2 Lewis Taylor (57’)
Brilliant free kick from 35 yards on the right wing found the far corner of the net.
3-2 Connor Smythe (67’)
Picked up the ball 25 yards from goal, dribbled through the defence and fired in from just inside the box.
4-2 Liam Theakstone (81’)
The substitute ran to the byline, his cross rebounded back off the defender back into his path and he found the back of the net with a cheeky back heal. 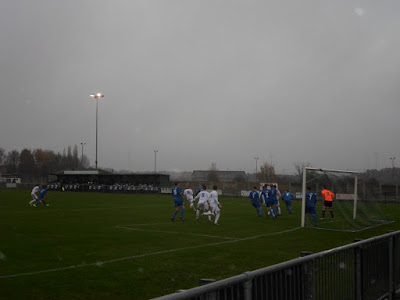