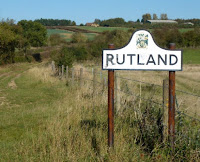 The first groundhop of the season in England involved clubs from the United Counties League and the Peterborough & District League, all based in and around the county of Rutland.

Rutland is a county in the East Midlands, landlocked by Leicestershire, Lincolnshire and Northamptonshire. The county council adopted the Latin motto Multum in Parvo .. "much in little" in 1950, as its only 18 miles north to south and just 17 miles east to west at its furthest points. It is the smallest historic county in England and the fourth smallest in the UK as a whole. Found at the centre of the county is the Rutland Water reservoir, which is an important nature reserve and wildfowl centre. 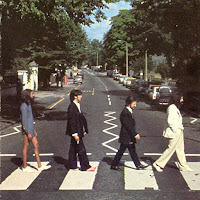 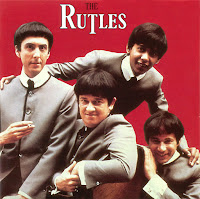 Rutland Weekend Television (RWT) was a TV sketch show on BBC2 in the mid-1970’s, which ran for a total of 14 episodes, written by Eric Idle with music by Neil Innes.

One show introduced us to The Rutles, the "Pre-Fab Four".were Ron Nasty, Dirk McQuickly, Stig O’Hara and Barry Wom. The Rutles story is a legend. A living legend. A legend that will live a lifetime long after other living legends have died. Innes wrote the music for the film All You Need Is Cash, most of which was parody of well-known Beatles songs and ranks as one of my favourite comedy films of all time.


I left home at 6.30 to drive down to Houghton-le-Spring as I was travelling to the hop with Katie and Lee. The traffic on the A1 was pretty quiet so the Katiemobile pulled into the Rutland village of Ketton half an hour before the first match kicked off. 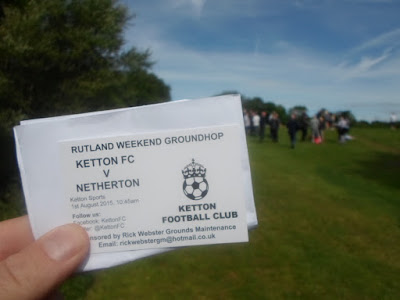 The village team of Ketton formed in 1988 and has a flourishing Junior set up covering all ages. The seniors are members of the Peterborough & District League, winning two back-to-back promotions to reach the First Division, before finally reaching the Premier Division this season. The club also run a reserves side in Combination Division Two.
Ketton Sports Association Complex on Pit Lane boasts some of the best facilities in the area for football, cricket and tennis with a fully licensed bar. The pitch is roped off with dugouts and benefits from grass banking up one side and behind the far goal. 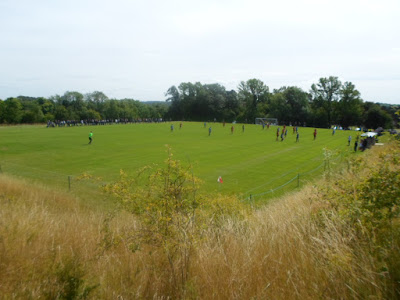 This game provided a cracking start to the day as Ketton hosted much fancied league contenders Netherton United.  The visitors took the lead when Tommy Randall was on hand at the far post for a simple tap in on 16 minutes, but Ketton drew level when Ben Waldron headed home from a corner kick just after the half hour mark.
In the second half the match was nicely poised but it was Netherton who gained the advantage when Dwayne Rankin played a nice one-two before producing a good finish on 66 minutes. The host grabbed a well earned share of the spoils when they were awarded a late penalty, when the United ‘keeper took out Lewis Morley as he went for a header. Alex Brockbank fired home the resulting spot-kick to make it all square before the mass exodus across to Stamford. 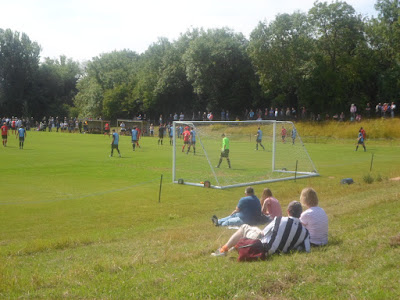 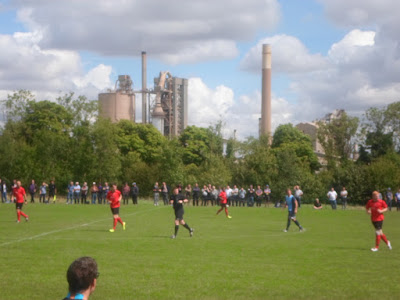 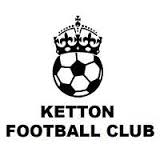 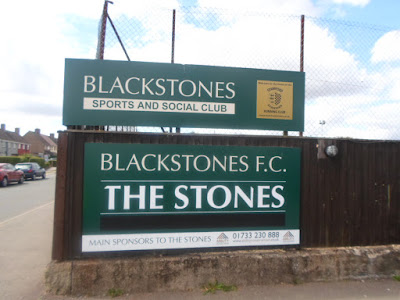 The club was first formed out of the Rutland Ironworks in the late 19th century, with the first recorded match in January 1891. The club played briefly after the First World War, before re-emerging in 1921 as the works team for the Stamford engineering manufacturer Mirrlees Blackstone. From the 1930’s the club were simply known as Blackstones FC. They played locally in both Stamford and Peterborough Leagues and eventually joined the United Counties League Division One in 1984. The Stones won promotion in 1987–88 and played in its Premier Division until they were relegated in 2013. 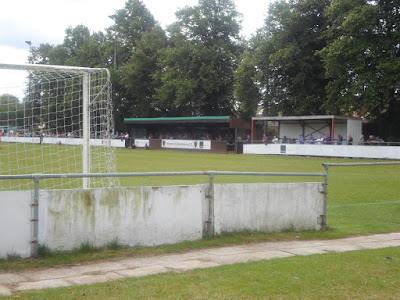 The Sports & Social Club which stands behind the near goal at the ground entrance was extended in 1984. I called into the clubhouse for a pint before the match, as Blackstones hosted Rushden & Higham.
All the amenities are at the main paying entrance to the left of the goal. The ground has a 100 seater stand next to a covered standing enclosure on one side, with the team dugouts opposite. The floodlights are slightly hidden by rows of trees on each side with the tall lights looking over the top of the greenery.

After an action packed first game this one wasn’t so good I’m afraid. The visitors took the lead on the half hour with the first piece of quality on show, when Lewis O’Dell whipped in a good cross which was met with a powerful header from Aaron Cormack. The home side gave the impression that the season had arrived too early and they weren’t quite up for it yet. However they still salvaged a draw when a soft looking penalty was awarded after a foul on Staffieri and Dan Evans converted from 12 yards. 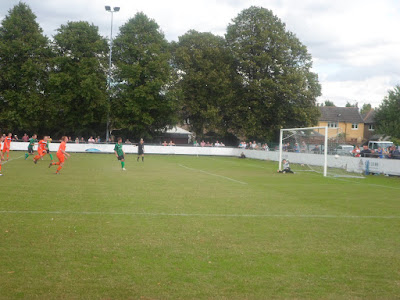 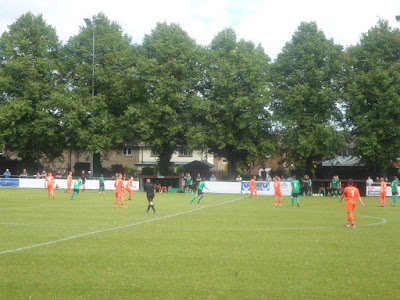 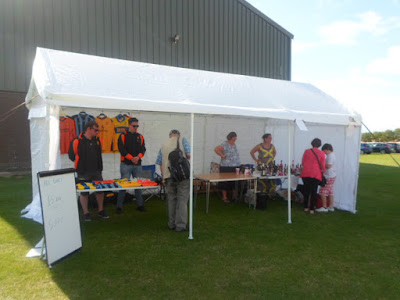 We stayed in Stamford for the next game which gave us just enough time to nip into town for a quick bevvy in The Stamford Post, before arriving at the ground with a few minutes to spare. Stamford Belvedere play at the Queen Eleanor School so as you can imagine the facilities are basic. However the ground does have a neat pair of black and orange dugouts at one side, with the pitch roped off from the other surrounding fields.
Stamford Belvedere were born in 1955 by a group of local lads and have played almost their entire history in the Peterborough & District League. The club had a spell playing at Stamford Town’s old ground on Wothorpe Road, before securing the Queen Eleanor pitch in the 1980’s. 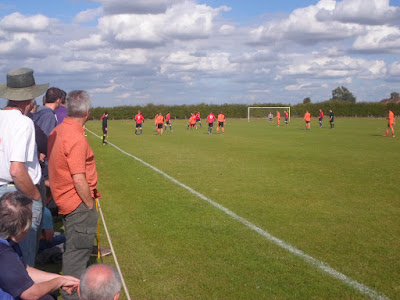 Stamford Belvedere faced Wittering who looked a very good side, going two goals up with headed goals from Ashley Middleton and Russ Lockwood, both connecting with decent right wing crosses. Just before the break the hosts halved the arrears when a handball in the box saw Jamie Saddington thump home the resulting spot kick.
The visitors finished the game strongly grabbing a third when substitute Joshua Watson took advantage of a mistake by the home ‘keeper to poke the ball home from close range on 76 minutes. Wittering could have extended that lead even further in the last quarter of an hour, missing a host of good chances in what turned out to be a very good away performance. 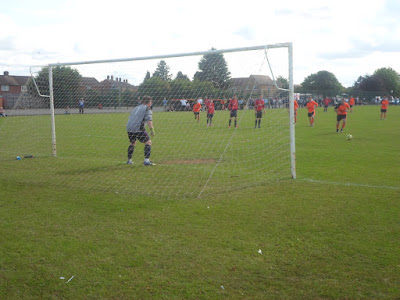 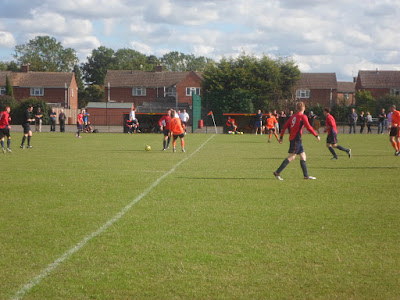 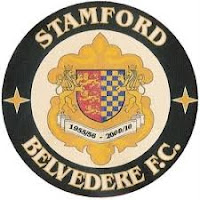 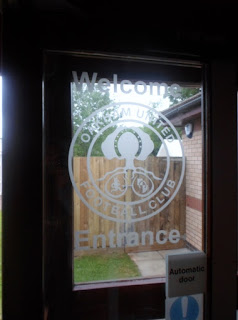 Next up was an 11 mile drive west to the town of Oakham. We were joined by Jack Warner who was coming for a drink with us in The Captain Noel Newton. We met up with Mark Wilkins as well and there was plenty of time for a couple of pints before the quarter to eight kick off.

The club was formed in 2011 with the merger of Rutland Rangers(formed in 1996 in Grantham & District League) and Oakham Imperial. The Tractor Boys won the Peterborough and District Football League Premier Division title in 2015, winning promotion to the United Counties League Division One.
Sterling Meadow is found within the grounds of the Rutland County College. The club must have some connection with a quality timber merchant as the nearside covered enclosure, the far side team dugouts and the outer perimeter wall are all made with prime wooden product. The ground also has a wee pond at the entrance with a large net on hand to retrieve wayward match balls. There is also three sets of lights on each side.
The nearby Oakham brewery produced its own bottled ale for the club, named after the 5th Earl of Lonsdale whose former residence still overlooks the ground. He was known as “England’s greatest sporting gentleman” having donated the original Lonsdale belts in boxing and was briefly chairman of Arsenal in 1936. 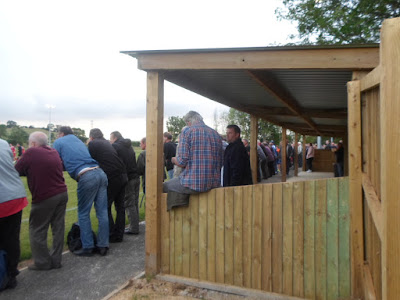 It was a disastrous start to live in the UCL for Oakham United, falling a goal behind after just 80 seconds when a corner kick was met by a good strong header by Sam Folland. They got themselves back in it just before half time when Daniel Jenkins got on the end of a free kick from the left to head in at the near post.
The second was a different story as the hosts dominated, going ahead just before the hour when Richard Nelson was allowed a free header from a right wing free kick, before McDonald followed in from close range after the ‘keeper parried a shot into his path on 65 minutes.  Buck Town set up a grandstand finish when Dan Delderfield reduced the arrears with 12 minutes left, but their chance weren’t helped when Scott Weymouth received his second yellow card on 82 minutes.
Oakham took advantage of the numerical advantage with late goals from Lewis Leckie and Stuart Lambie wrapped up a great performance and a great day of football for the Rutland Groundhop 2015. 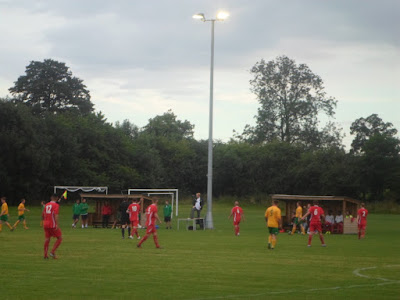 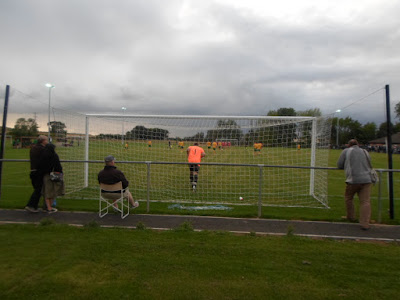 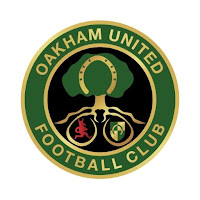 After the game we headed to our overnight stay at the Travelodge just outside Thrapston, so we were close to the first hop match the following day. I was hungry so we decided to stop somewhere for a bite to eat on the way and luckily we drove past a Wetherspoons pub just outside Corby. The Samuel Lloyd was full of pissed up crackerjacks, but it didn’t put me off having a few pints and a burger before we eventually arrived at our hotel just before midnight. All in all an excellent day with another 3 matches to look forward to on Sunday.