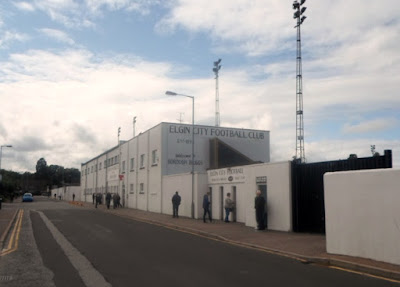 I decided that for my 50th birthday to go somewhere different and as I'm not the sort of person who gives into cliché or type, there was no trip to New York or a holiday in the sun.
As my birthday fell on a Saturday there had to be football involved, so I decided to head as far north as possible, with a night in Inverness and to visit the northernmost senior league ground in the UK*.

Whereabouts and Whatsabouts
Elgin is a former cathedral city and Royal Burgh, the administrative and commercial centre for Moray. The town sits south of the River Lossie on the higher ground above the floodplain and was first documented in the Cartulary of Moray in 1190 AD. It was created a Royal Burgh in the 12th century by King David I of Scotland and by that time had a castle in the west on top of the present day Lady Hill. Nowadays the former castle site on the hilltop is an 80 feet monument erected in 1839 in honour of the 5th Duke of Gordon, the first commander of the Gordon Highlanders regiment.
The modern town straddles the river, splitting the suburbs of Bishopmill to the north and New Elgin to the south. Rare Permo-Triassic rocks are commonly found around Elgin, which comprises of aeolian sandstone formed when the area was subjected to desert conditions. 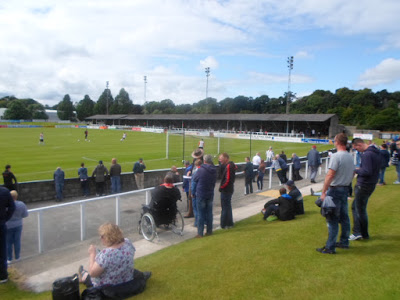 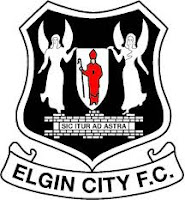 In the late 19th century there had been two different clubs that used the Elgin City name. The first of which was founded in October 1879, but lasted for only a short time before a new club was formed in October 1884 and continued until early 1887. The present club was formed on the 10th August 1893 by the union of Elgin clubs, Rovers (Formed 1887) and Vale of Lossie (Founded 1888). The present club's first major honour came in the 1898/99 season when they became the first club outside Inverness to win the North of Scotland Cup beating Clachnacuddin 2-1. The Black and Whites have gone on to win this trophy a total of 18 times including a club record victory in the competition, when they hammered Brora Rangers 18–1 in February 1960.
Elgin City became members of the Scottish Football League in 2000, when the league was expanded with two new clubs, as Peterhead joined them from the Highland League. The club were league champions for the first time in 1931-32 and they won a total of 15 titles as well as lifting the League Cup on five occasions. 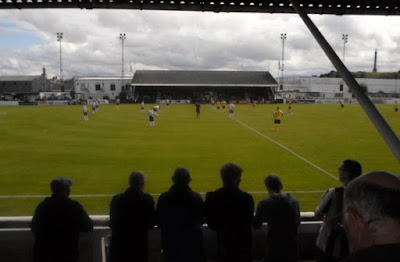 Elgin City moved from Cooper Park to Borough Briggs in 1921.The Main Stand looks in great nick for its age, the white exterior walls have the club and ground name proudly displayed at the entrance. The stand sits on the halfway line with a capacity of 478, although I stood on the terraces I may have already park my backside on one of its seats, as it is filled with seats giving to the club from Newcastle United when the club were elected to the Scottish League and the Toon were revamping the Milburn Stand. Next to the stand is a small open terrace at one side, with the snack bar which also sells club merchandise on the other side in front of the turnstile entrance. The team dugouts and four sets of thin floodlight pylons are also on this side. Opposite is a pitch length covered enclosure, which has four sets of floodlights which go through the roof and onto the terrace.Behind each goal is new terracing with grass banking behind, so on a lovely summer’s afternoon it was nice to lie on the lawn and watch the game.
The ground currently capacity is 4,520, with a record attendance of 12,608 against Arbroath on the 17th February 1968 in the Scottish Cup. 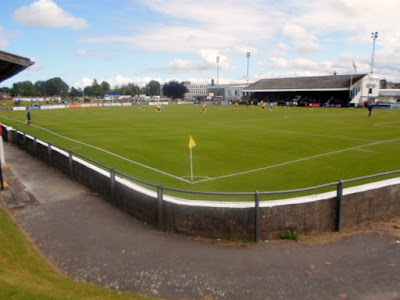 The Match
The Black and Whites twice came from behind to book their place in the second round of the Scottish Challenge Cup.Craig Beattie fired Stirling into the lead on 19 minutes when he capitalised on a misplaced backpass, then just before the break the hosts were back in it, after a foul in the box saw Craig Gunn stroke home the resulting spot kick.
Stirling looked to have taking charge of the tie, when Sandy Cunningham was on hand to fire in the rebound in the 55th minute after the initial shot hit the post, but City quickly responded making it all square five minutes later when Jamie Duff  fired in a right wing cross from six yards.
Elgin dominated the closing stages and were awarded for their efforts when Brian Cameron volleyed in a superb winner to save the match going into extra time and allow us to catch the earlier train back to Inverness. 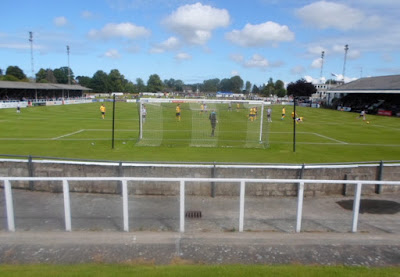 My Matchday
After my two nights in Glasgow, I headed across to Edinburgh on Friday for a birthday eve night out. I met up with the breadknife who was arriving on the 1555 train from Newcastle, and we headed to the James Little guest house for our overnight stay. There was mince 'n' tatties on the menu, which was good blotting paper for our pub crawl around the south side of Edinburgh. We were joined by James' pal John and later Jamie McQueen, who had been to the match at Whitehill Welfare.
After a heavy drink and a late night, me and the breadknife were up sharp at 7am for the Megabus trip to Inverness, where we arrived just after midday. On our arrival there was just enough time to drop off our luggage at the hotel, buy our tickets and catch the 1247 Aberdeen train to Elgin.
Before the match there was the obvious stop off at Wetherspoons, where I enjoyed a tasty Highland Burger and my first birthday drinks of the day. Just prior to kick off I had a quick flick through the matchday programme to find that Elgin City were good enough to wish me a happy birthday, which was a very nice touch ... but how did they know? 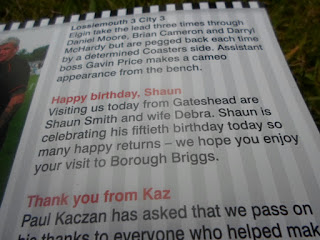 Another canny bevvy was enjoyed for my birthday night in Inverness where we found some cracking little pubs and also a few lively ones. The town centre was jumping and I've never seen so many lasses wearing mini-skirts. So much so that I saw more pairs of legs in one night than I've seen watching football so far this season.
So that was my 50th birthday... a wee tour of Scotland, 3 matches and 4 days on the lash. I can now boast that I spent my half a century birthday at the most northerly league ground in Britain*, and not many people, if at all anyone outside Elgin can make that claim. 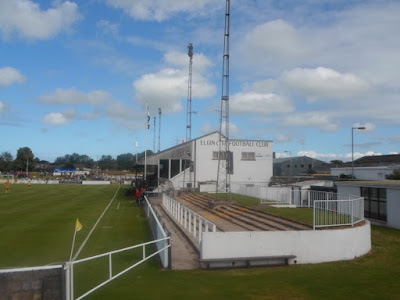