After 4 matches on Saturday with each team scoring at least one of a grand total of 17 goals, I was keen to see what the next three matches would produce. After a good night’s sleep and a relaxing morning bath, I was ready for the short drive from the hotel to Thrapston town centre for today’s first game. 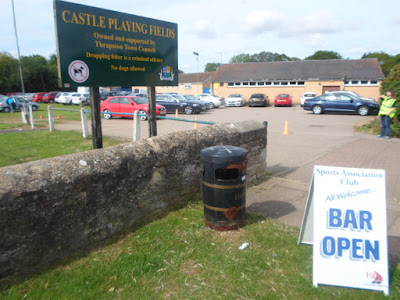 The club was established in 1960 as Thrapston Ventura,  joining the Kettering Amateur League, winning the title five times during the 1970’s. They switched to Division Two of the United Counties League in 1978, finishing third in their first season and were subsequently placed in Division One after league restructuring. The club became “Town” in 1996 and were promoted to the Premier Division in 2010-11 but were relegated in their debut season.

The ground is shared with the cricket club, so all the spectator facilities are down one side. There are three small covered sections of seats and a small three step covered enclosure on the other side of the dugouts. The rest of the ground is open with the far side roped off from the cricket pitch. 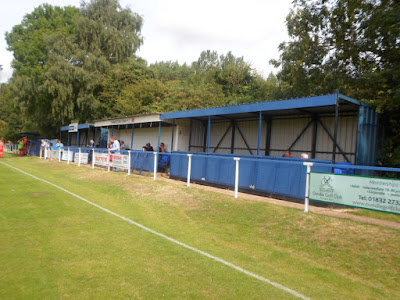 Thrapston Town started the match on the front foot against St Neots Town Saints. After a spell of early pressure Ben Morgan finally broke the deadlock with an opportunist finish on 19 minutes. Their second was scored by Jed Whiteman on 28 minutes and it was probably the best goal of the weekend. He picked the ball up wide on the left, sprinted down the wing evading tackles, before racing into the box and firing hard and low into the right hand corner of the net. It was 3-0 before half time when Morgan set up Charlie Perkins, then when Chris Hope headed in 35 seconds after the restart, it was just a matter of how many the hosts would score.
St Neots had a chance to get back into the game from the penalty spot on 49 minutes, but Soloman Orieji couldn’t hit the target, firing a good yard past the post. After that missed opportunity the visitors played really well, creating plenty of chances and eventually found the back of the net three minutes from time, when substitute Ageymang got on the end of a right wing ball to slide in at the far post. It was too little too late for the Saints, but it might have been a closer outcome if they had converted that wasted spot-kick early in the second half. 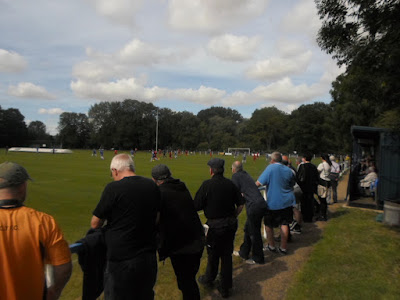 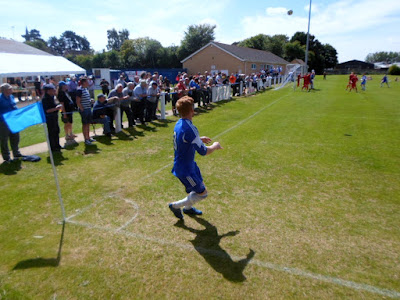 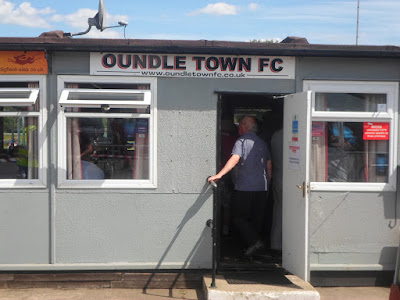 Football in Oundle dates back to 1883, the club secretary was Mr.W.E.Dolby and the club captain Mr.W.T.King both belonged to well known families in the town. The club first played in the Peterborough League in 1910 and have won an array of local cup honours throughout their history. The club moved from its first home, off Benefield Road to their present ground on Station Road in 1952. The ground is known locally as “the Waitrose Arena” as the supermarket stands  in the shadow of the fully railed off pitch. There are dugouts on one side, with the ground entrance behind the goal, where access is gained through the homely clubhouse.

This was my favourite club of the seven on show over the weekend as they went all out to make it a special occasion. There was a beer tent serving beer from the local Nene Valley Brewery, including a special commemorative bottled ale, so I bought a couple of bottles(one to drink and one to keep) I was also going to also purchase one of their black ‘n’ white striped away shirts, but unfortunately the jersey didn’t have to club crest on it. There were also plenty of home shirts also available, but as it's red and white stripes I didn’t bother. The whole afternoon was hosted by a bloke on the microphone, who was a bit of a Brian Potter type, but it was all in good humour and he gave out plenty of useful information, including the goalscorers in a seven goal thriller. 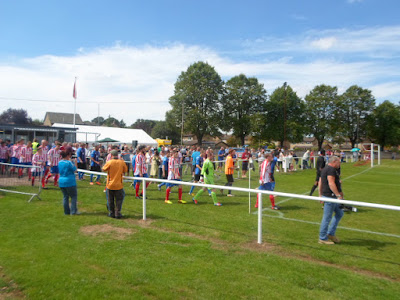 Oundle good off to a great start against Baston FC, courtesy of yet another penalty as Johnny Hipwell fired in from the spot after the referee spotted a handball offence. The visitors equalised on half an hour when a goalmouth scramble was knocked over the line by Connor Murphy for an own goal, but he made amends in first half stoppage time to fire his side back into the lead.
Baston levelled just after the break when Dan Pitt beat the ‘keeper to a long ball to fire in, then ten minutes later Troy Waters slotted in a left wing cross, which resulted in an injury to the goalkeeper.
The hosts looked to have grabbed a point when Chris Kaye played a quick one-two and finished well, but yet another Rutland ‘Hop penalty decided it in the last minute, as Waters converted from 12 yards to give Baston a credible 4-3 victory. 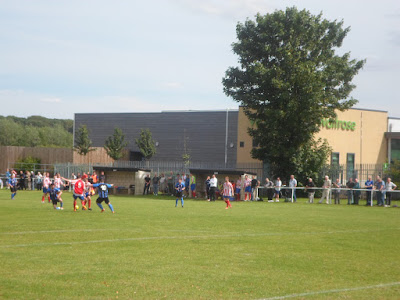 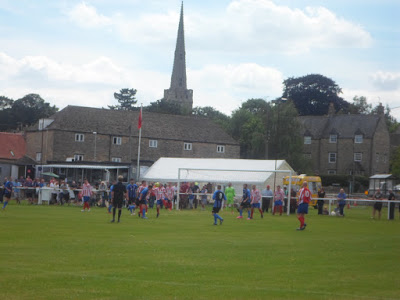 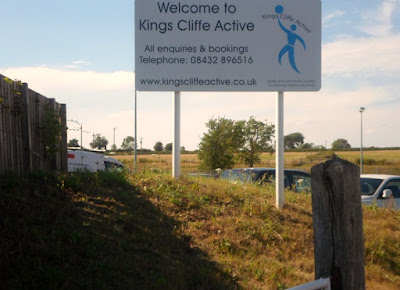 The village of Kings Cliffe was our final destination of a cracking weekend. Kings Cliffe United was founded in 1910 and have played on various pitches around the village. They finally settled at Kings Cliffe Middle School where their junior set up, the Red Kites were formed. In 2011 they moved to the new premises at Kings Cliffe Active after achieving Charter Standard Status, with the facilities supported by the Football Foundation.

I mentioned the special effort Oundle made in hosting a hop game, but Kings Cliffe played the trump card and I'm not talking about the  beer tent serving 4 ales from the neighbouring Kings Cliffe Brewery. Prior to kick off six paratroopers from the local airfield landing on the pitch(well 5 did, one ending up behind the goal) as part of a champagne prize draw and more importantly, to present the match ball to the referee. 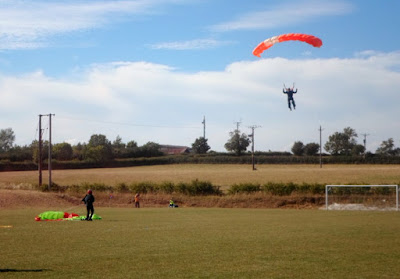 Those six lads that jumped from the sky was the best thing on the pitch all afternoon, as the final game turned out to be a bit of a stinker. The match had nowts-each written all over it until a late Stamford corner kick was knocked in by Sean Kelly, which was greeted by a huge cheer of relief from the 'hoppers in attendance. In the final few minutes the Lions could have added to the score, with more action in the closing stages than the previous eighty plus minutes. 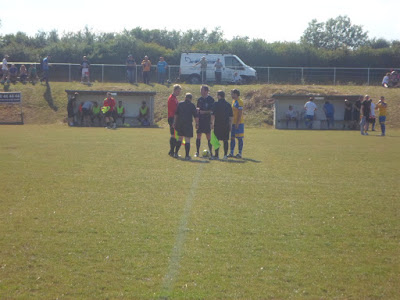 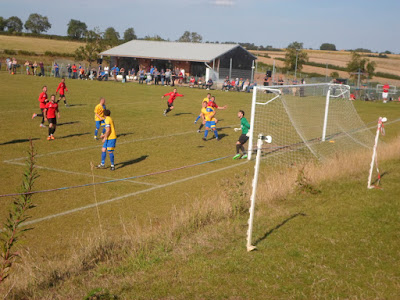 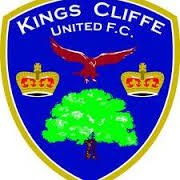 Considering I wasn't really looking forward to this weekend it turned out to be really ace. As always it's good to meet up with some of the groundhopping pals from around the country including some people for the first time, namely Squad#170 Neil Daniel, Paul Splodge Proctor, Ian and Duncan the GBG pub collectors and Talksport's Tony Incenzo.  A big well done to all the clubs involved and of course Chris and Lawrence for playing another blinder in organising such a wonderful event.