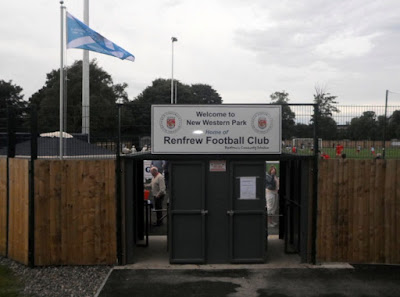 As part of this continuous journey I was hoping to tick off Renfrew on the day they moved into their new ground. I booked advance train tickets to Glasgow for this date and luckily fate was on my side, as the club announced the opening of New Western Park was against their former landlords in the group stage of the League Cup.

Whereabouts and Whatsabouts
Renfrew is a town 5 miles west of Glasgow, known as the "Cradle of the Royal Stewarts" due to its connection with the Royal house of Scotland and Great Britain. The town gained royal burgh status in 1397, becoming the county town of Renfrewshire and is also a barony. The current Baron of Renfrew is HRH Prince Charles. Down our way he is known as The Prince of Wales, but up in this part of the world he's the Duke of Rothesay, who holds lands in the area as part of the principality of Scotland. 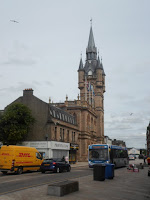 There is still evidence of the Royal Stewart castle which dates back to the 12th century, built by Walter fitz Alan, High Steward of Scotland. The tactical location of this castle was to prevent the eastern expansion of Somerled's lordship and from Norse invaders. It was rebuilt and extended in the 13th century by James Stewart and was the chief residence of Clan Stewart. The castle eventually fell into decay and was converted into a soap works before being demolished in the 19th century. The town centre skyline is dominated by Renfrew town hall, designed by James Lamb of Paisley. The building is a mix of French and Gothic styles, featuring its square tower standing 105 feet high with corbelled turrets at each corner.
On route to the match I stopped off at the Braehead shopping complex, which was opened not far from the town centre in 1999. I wasn’t there to do a spot of shopping mind, there was a Wetherspoons tick to be had amongst its many bars, restaurants and attractions. The town lies close to the M8 motorway, making it easily accessible by car, while regular bus services connect the town to Glasgow and other places in the area. 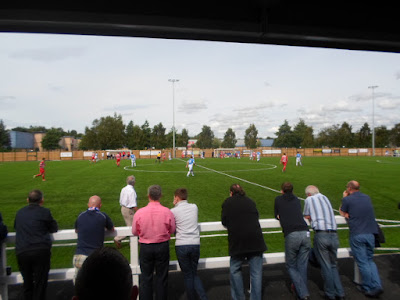 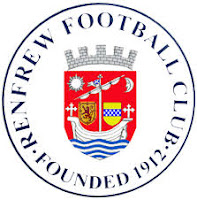 Renfrew F.C. were founded on the 6th May 1912, taking over Western Park from the defunct Junior Club Renfrew Victoria, who had called it a day and vacated the ground two years earlier. There was also a senior side which played in the town in the late 19th century, who took part in early years of the Scottish Cup. The club were successful from the off, winning the Scottish Junior Division One title twice and lifting the Renfrewshire Cup for the first time in 1917, a trophy they have gone on the win ten times. This was also the year when they reached their first Junior Cup final, navigating everyone round without conceding a goal, until the cup final replay saw St Mirren Juniors bag the only goal of the game to claim the top prize. It was a similar story in 1962, a single goal defeat to Rob Roy in the replay after a 1-1 draw, then in 2001 they completed a unique Junior Cup final hat-trick. The Frew faced Carnoustie Panmure at Firhill Park and played out yet another draw, however the days of replays are long gone, so after another 120 goalless minutes they overcame their opponents 6-5 in a penalty shoot out, with Neil Shearer scoring the decisive spot-kick.
The blue and white striped shirts of The Frew have won a host of local cup competition and in the league they claimed the Central League Division One title in 1991-92. Their highest finish since the Juniors reconstruction was in 2005-06 when they finished runners-up to Auchinleck Talbot in the West Super League Premier Division. 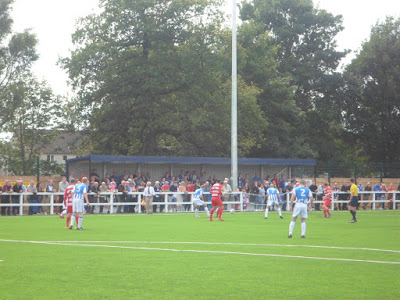 The move to a new ground has been mooted for over 30 years and at long last the club begin a new era on the edge of Renfrew Retail Park. The paying entrance is in the corner, where behind the goal is the changing rooms, hospitality bar, toilets and refreshment hatch all within one building. Down one side is a small covered terrace with hard standing along this side which continues behind the nearside goal. Spectators are only allowed to use these two sides, as the opposite side has the team dugouts and a players warm up area, while there isn’t enough space behind the far goal. The ground has floodlights and a superb 3G pitch, which is good news for Groundhoppers during the winter months. The stadium is a working progress, so with more funding further improvements will be made including the option to extend the stand. 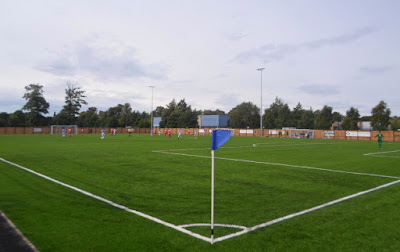 The Match
It was quite fitting that Johnstone Burgh provided the opposition for the first match at this new venue, having been kind enough to allow The Frew to groundshare at Keanie Park last season. As for the game there was little action in the first half and as the match progressed it was looking more likely that I was about to record my first goalless game of the season.
The first decent chance fell to Burgh after an hour, when an effort from Jason Hardie hit the underside of the crossbar and fortunately for Renfrew the ball bounced on the goalline, before being safely cleared.
Renfrew finally broke the deadlock on 74 minutes, when Marc McDaid found room on the right to pick out Alan Kinney in the box who slotted the ball home. The win was sealed in injury time when Scott Arthur timed his run to perfection to stay onside before rounding the ‘keeper and running the ball into the net. So a good start to Renfrew at New Western Park, a win, a clean sheet and a decent crowd in attendance. 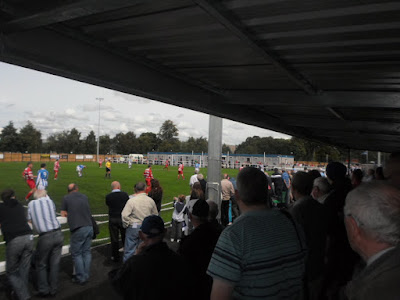 My Matchday
I caught the direct train from Newcastle to Glasgow, where on arrival I stopped off for breakfast and numerous cups of coffee. I met up with James Little at Buchanan Street  Bus Station at 11am, to catch the X23 bus out to Renfrew. We originally planned to get the train to Yoker, then catch the ferry across the river. Because of its close proximity to the south bank of the River Clyde, a ferry has operated between Renfrew and Yoker on the opposite bank for more than 300 years. The last car ferry was retired in 1984, but a frequent passenger-only ferry still plies the route. We got off the bus at Intu Braehad for a few swift pints in The Lord of the Isles, before making more use of our £3.80 all day ticket to catch the bus to the town centre. After a few more bevvys in the Davidson bar we walked along to the ground, passing the original Western Park which is nothing but barren land and no clues that this was once the proud home of Renfrew FC for over a century.
When we arrived back in Glasgow after the match, there was enough time to call in the Horse Shoe bar before catching the train home. We got there in time for the pending full time scores, discovering that the Heed won, the mackems had lost and for James, a win for Hearts and a defeat for Hibs. Other football scores went my way so there was the rarity of my football bet kopping, all this as well as a good day out in Renfrew, completed what I would call a perfect Soccer Saturday.

Footnote
Hopefully a book will be published on my journey around the winners of the Junior Cup over the last 50 years, which will feature a more detailed account of my visit to Renfew.
on August 09, 2015
Email ThisBlogThis!Share to TwitterShare to FacebookShare to Pinterest
Labels: Johnstone Burgh, Renfrew