In 2005 as part of my 40th birthday celebrations, me and the lads had a splendid weekend in Liverpool. So for the tenth anniversary of that memorable weekend(and for another significant birthday) we returned to Merseyside for a couple of nights on the lash. Of course there has to be some football as well, so special thanks to Tranmere Rovers for arrange a double with their Wirral neighbours  to coincided with our visit.
We travelled down on the Friday afternoon. Jimmy Jimmy and Zippy are survivors from the 2005 team, with Plymouth Pete and Honest Paul replacing absent “pilot light friends"

After a heavy drinking session on Friday night/Saturday morning, I had breakfast and hair of the dog in the new 'Spoons in Lime Street, before we(apart from lightweight Zippy, who was bad with the beer) caught the Merseyrail service from Central Station to Heswall. This was Tranmere's opening friendly in preparation for life in the Conference (can't get used to the new fangled name) with a 1pm kick off. 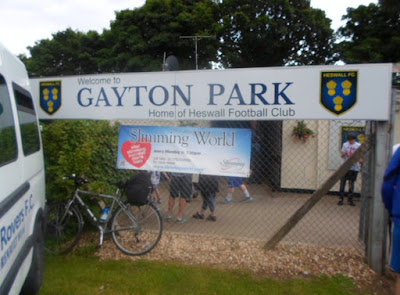 Heswall is a town in Wirral in the county of Merseyside, located on the eastern side of the Dee Estuary. The town is found in between Liverpool and the Roman city of Chester, with a population of over 16,000, which includes the nearby villages of Barnston and Gayton.
Prior to the Norman conquest, Heswall has been cited in Egil’s Saga as a possible location for Dingesmere, in the Battle of Brunanburh. Heswall was recorded in the Domesday Book as Eswelle and owned by Robert de Rodelent, as well as much of the land on the eastern side of the River Dee. Before 1897 it was known as Hestlewelle or Hesselwelle, and the small population of the town grew with the arrival of two railway connections to Liverpool and the Borderlands Line between Bidston and Wrexham. 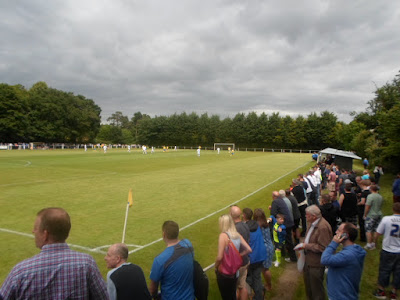 The town is the birthplace to quite a few famous people including former England cricket captain Ian Botham, Bullseye presenter Jim Bowen and a couple of ex-footballers like Paul Bracewell, Ian Woan and Scott Minto. The town also gave birth to vocalist Ian Astbury from The Cult and Andy McCluskey, the singer from OMD who had a dancing style similar to my old Geography teacher at the end of term disco.

In August 1939 a radio broadcasting legend was born in Heswall, one John Robert Parker Ravenscroft who became Radio One DJ John Peel. I used to listen to his late night show as a young teenager, lying in bed with an old transistor radio glued to my lug. When I got my first radio/cassette player I used to tape all the Peel sessions, amassing dozens of tapes of performances from punk bands from the late 70’s early 80’s. 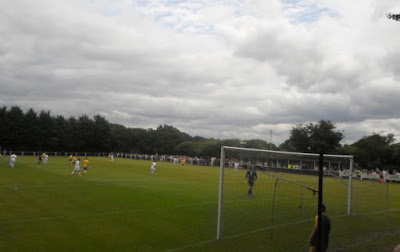 Heswall FC have been in existence since 1891 and joined the West Cheshire League in 1958-59. They were promoted to the First Division as Second Division champions in 1968-69, winning the top division twice in 2004-05 and 2012-13. They also reached the third round of the FA Vase on three occasions during the 1980’s.
Gayton Park is hidden off the main road between the rail station and the town centre. The ground has a small covered enclosure with one dugout at each side. The impressive clubhouse is at the top corner of the ground elevated about the pitch and its leafy surroundings make it a pleasant venue to watch football. 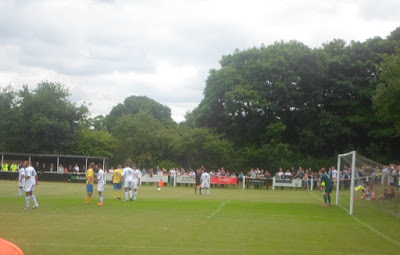 A decent crowd was in attendance to see Rovers ran out comfortable winners with three first half goals. Jack Fleming headed Tranmere in to the lead on 17 minutes, before Lois Maynard doubled the lead from close range just half the half hour mark. On the stroke of half time Liam Ridehalgh rifled in from 20 yards. In the second half Rovers fielded a fresh set of players but they were unable to add to the tally in which was a good workout against the West Cheshire League side.

On route to the match I met Steve Horton(100FgC #87) for the first time and at the game another first meeting with Stuart Latham (100Fgc #94) which means I’ve now met 62 original members of this gang. Also at the match I swapped a smile, a nod, a wink and an “Alreet!” with Nigel Blackwell from Half Man Half Biscuit.
My mates knicked off back across to Liverpool while Steve took advantage of a rare visit to this side of the Mersey to tick off some CAMRA pubs. Thankfully Stuart agreed to travel down to Vauxhall, so instead of trying to cadge a lift off a kind stranger (as public transport between to two grounds is too much of a clart on) I was sorted for the second game of the day in Ellsemere Port. 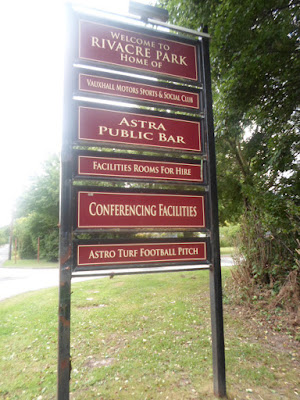 The distance between the two grounds is just over 8 miles so we arrived a good 45 minutes before kick off, so plenty of time for a chat and something to eat before the game. Riveracre Park is found just off the M53, the club originally played on the company-owned Hooton Park, before moving here in 1987. The ground brags a large car park, although we struggled to get a decent spot and I avoided having a pint at the Astra Bar in the entrance grounds, as I was still feeling a wee bit fragile.
The ground has a main stand on one side with a capacity of 350 blue and white flip seats. The large dugouts are in front of the stand which means the bottom two rows of seats have a restricted view. Opposite the stand is a fairly large standing enclosure and there’s open hard standing areas behind each goal. The changing rooms are next to the turnstile entrance along with the Cafe Bar. 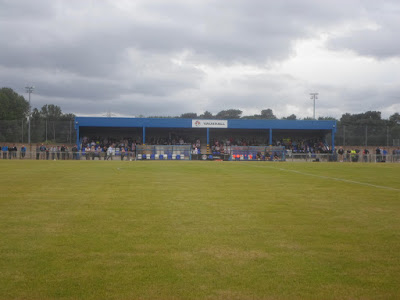 The town of Ellesmere Port was founded at the outlet of the never completed Ellesmere Canal, originally part of a project to connect the rivers Severn, Mersey and Dee. The canal was intended to be completed in sections, but due to financial problems the canal never reached the Severn. The village of Netherpool gradually changed its name to the Port of Ellesmere, then to Ellesmere Port in the early 19th century.
The growth of the expanding industrial areas around the canal and its docks attracted more workers to the region, to incorporate the villages of Great and Little Sutton, Hooton, Whitby,
Overpool and Rivacre as suburbs, once the the Manchester Ship Canal opened in 1894.
In the 20th century, a number of new private and council housing estates were developed, many of them on the sites of former farms such as Hope Farm and Grange Farm. The demand for housing increased with the opening of the Vauxhall Motors car plant in 1962, opened as a components supplier to its main Luton plant. It’s now Vauxhall's only car factory in the UK since the end of passenger car production at the Luton plant in 2004, and employs 2,500 workers. 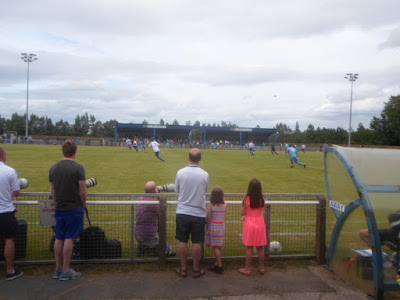 Out of the car plant came a football club - Vauxhall Motors F.C. was founded in 1963, beginning life playing in the Ellesmere Port League and the Wirral Combination.The club progressed to the  West Cheshire League, becoming championship in the 1985–86 season, before joining the North West Counties League in 1987. They won the league's Second Division in their second season, then finished fourth in the First Division in 1989–90, but after just two more seasons the board took the decision to move back down to the West Cheshire League.
In 1995-96 they rejoined the NWCL, again winning the Division Two title, then at the turn of the millennium joined the Northern Premier League after becoming Division One champions as well as reaching the semi finals of the FA Vase. Another promotion quickly followed, before the high point in the club’s history when they knocked out Queens Park Rangers in the first round of the FA Cup in 2002-03.
The Motormen were placed in the Conference North after the pyramid reconstruction in 2004, escaping relegation due to the misfortune of other clubs.In March 2014 the club announced its intention to withdraw from the Conference North due to "ever-increasing costs" leaving the club with no alternative but to return to the West Cheshire League to stabilise and rebuild once again for the future. 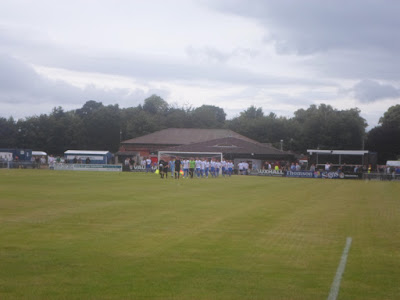 The Motormen provided a stiffer test for Tranmere with new signing Andy Mangan producing a good finish on 31 minutes to give the visitors a slender half time lead. Again for the second half a new team took the field which meant over 40 players had represented the club on this afternoon. The team was made up of trialists for the second half and one of them was the star of the show. After just 15 seconds “Trialist H’ fired in with a fierce shot before helping himself to another three goals and hitting the woodwork twice, surely this lad has done enough to earn himself a contract. Another two trialists “J” and “I” scored late on to round off a brilliant second half performance from players playing for their futures.


After the match Stuart was kind enough to drop me off at Hooton station and I only had to wait a few minutes for a train, so I was back in Liverpool by 6.20pm. I returned to the hotel earlier than I anticipated so I was ready for the second part of our Liverpool CAMRA trail by half seven. Overall we had a fantastic weekend. I always enjoy my visits to Liverpool,  so much so that we’re already making plans to come back again next year, as it’s Jimmy Jimmy’s turn to have a significant birthday celebration.

Afternoon Shaun
Enjoyed going down memory lane, played for Heswall many years ago, does anyone know if John Rutter is still with us? My email is david@chesterhouses.co.uk Landline 01352 770787
Kind Regards
Dave Coleman