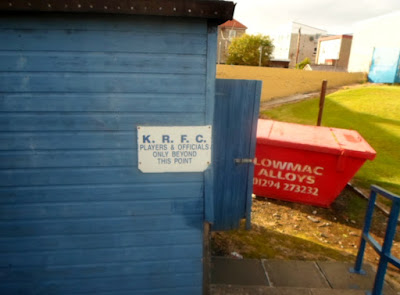 Following on from the match at Kilsyth the previous evening, the second game on my Glasgow stopover was 20 miles south of the city in Kilwinning.
Whereabouts and Whatsabouts
Kilwinning is a town on the River Garnock known as "The Crossroads of Ayrshire" Its ancient name is Segdoune/Saigtow from the word 'Sanctoun', meaning ‘Saint town’. Kilwinning is steeped in religious history deriving from its 12th century Abbey, the site of which is said to have been revealed to Saint Winning by a visionary Angel. It was founded sometime between 1162 and 1188 with monks coming from Kelso, dedicated to Saint Winning and the Virgin Mary. The date assigned to St Winin is 715 AD, when his festival was celebrated on the 21st January, when a town fair was held and called St Winning's Day. 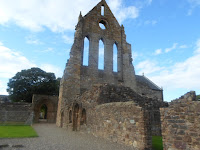 According to legend the Saint sent his monks to fish in the River Garnock, however no matter how hard they tried they could even catch a tiddler. The dejected saint placed a curse on the river, preventing it from ever having fish in its waters; the river responded by changing course and thereby avoiding the curse.
This part of North Ayrshire was where the missionary enterprise began in Scotland, with the Celtic Christians or Culdees founded here. The town is also home to the oldest Masonic Lodge not only in Scotland, but the world. The Mother Lodge of Scotland attributing its origins to the 12th Century, and is often called Mother Kilwinning
Kilwinning was a noted centre of Archery in medieval times. Later the town had an association with coal mining, quarrying, iron-founding and textile manufacture, with the Pringle knitwear company originally manufactured their goods in the town.
Kilwinning fell within the area designated to Irvine New in 1966, expanding with new estates built on surrounding farmland to meet the planned increase in population. This included new inhabitants relocated from the Glasgow overflow, and according to the last Census the population is just over 16,000.
Modern industries include the manufacture of plastics and electronics. The refurbishment of Kilwinning Main Street in 2010 by Irvine Bay Regeneration Company led to a number of new businesses opening shops in the town centre, one of a number of regeneration projects in the Irvine Bay area. 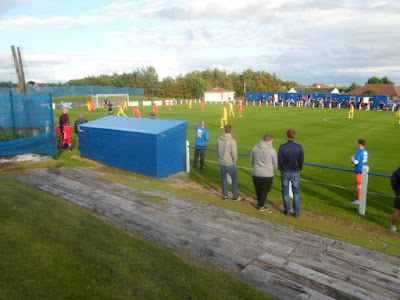 Plantpot History
Kilwinning Rangers formed in 1899 and are affectionately known as “The Buffs” a nickname giving to them by the Irvine Herald newspaper after an emphatic win over Kilmarnock Belgrove in 1900. The club began life as a juvenile club, originally playing at Blacklands Park, which they shared with senior team Eglinton Seniors, before officially joining the Junior ranks on the 26th July 1902. The club bagged their first trophy in the Ayrshire Cup in 1905 and won the the Ayrshire First Division in 1920-21, becoming champions an additional nine times throughout their history. 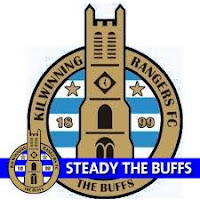 The Junior Cup was won for the first time in 1909, beating Strathclyde 1-0 in a replay after the original tie finished goalless. The Buffs lost out twice in the final against Ashfield in 1910 and St Rochs in 1922, before finally lifting the trophy again after a 90 year wait, when a goal from Gerry Peline was good enough to beat Kelty Hearts at Firhill Park. That 1999 success meant they were the first and last Ayrshire club to win the Scottish Junior Cup in the 20th century, which topped off their greatest season when they won six trophies in 1998-99.
Kilwinning were the second club and the first from Ayrshire to win the West Super League in the 2003-04 season, but over recent years they’ve yo-yoed between the Super League First Division and the Ayrshire District  League, winning promotion again last season. 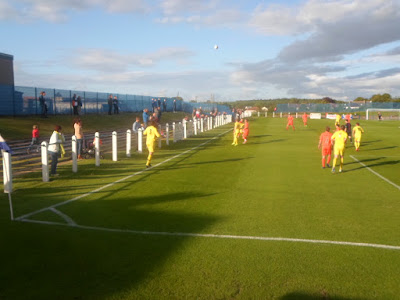 Ground no.473 Abbey Park
(Scottish Grounds 65 SJFA Grounds 19 Lifetime Junior Cup Winners 13/27)
Abbey Park is hidden off Church Street, just a short walk from Main Street. From the corner entrance there's seven wooden sleeper steps running up half way towards the away dugout. These sleepers are also behind the far goal with a covered terraced enclosure opposite. The main part of the ground is down one side behind the home dugout. There are cabins which provides catering, a hospitality bar, toilets and the changing rooms. After walking around the ground I discovered there's another paying entrance around the far side, although this too lacks a sign to let you know this is the home of Kilwinning Rangers. The ground looks in great nick, the pitch is immaculate (Aye, I know its still July) and overall the lawns and facilities are well maintained. 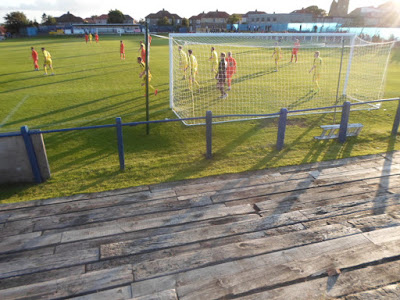 The Match
Kilmarnock are regular pre-season visitors to Abbey Park. The Buffs wear blue and white hooped shirts, but tonight they were kitted out in an all lemon number, while Killie wore all orange, so this along with the bright sunshine gave it a summery feeling.
Kilwinning took the lead after just seven minutes when a 20 yard free kick from a central position was nicely placed out of the 'keeper's reach by Ben Lewis. Kilmarnock quickly responded and equalised minutes later when Scott McClean headed home a left wing cross. The first half was pretty even, but it was the senior side that dominated the second half, snatching victory with two goals in the last ten minutes. The game seemed to be heading for a draw until substitute Jack Whittaker got on the end of a right wing cross with a neat side foot volley at the far post. Moments later a shot from Adam Frizzell took a big reflection off the defender to wrong foot the goalie to make it 3-1. Judging by this performance I think the Buffs will do OK in the Super League First Division this season, while Killie have a few talented young'uns on their books. 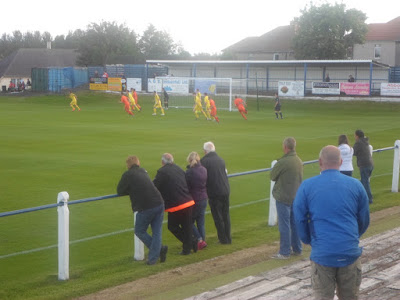 After a pleasant day in Glasgow, where I got up to my usual gubbins of pub ticking and record store shopping, I caught the train down to Kilwinkie at 6pm. I didn't have to time for a bevvy in the town before or after the game, but a steady pub crawl of about 5 pubs from station to ground is an option for visitors. After returning to Glasgow I called into The Horse Shoe, my favourite pub in the city then a couple of bevvys on Sauchiehall Street, before retiring back at my digs after a long eventful day.
I had a smashing couple of days in Glasgow, my next stop on my wee Scottish tour is Edinburgh, where I'll be meeting up with the breadknife, James Little and Jamie McQ for a birthday eve night out, before my next match which is as far north as I could possibly get to this Saturday.
Foetoes  (Matchday album of 20 pictures from Abbey Park)

I'm in the process of writing a book on the winners of the Junior Cup over the last 50 years, so there'll be a more detailed account of my Kilwinning visit in the publication.
on July 24, 2015
Email ThisBlogThis!Share to TwitterShare to FacebookShare to Pinterest
Labels: Kilmarnock, Kilwinning Rangers