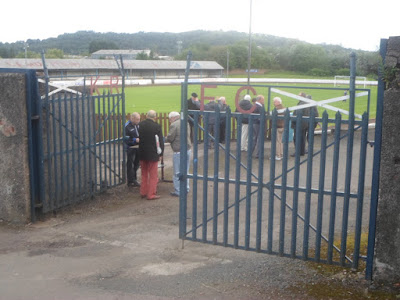 This was the week of my 50th birthday so I headed off to Scotland for a few days beginning with two nights in Glasgow. I arrived at 4pm, checked into the guest house, supped a quick couple of pints before catching the 89 bus from Buchanan Street to Kilsyth for the first part of my Kil’ Rangers double.

Whereabouts and Whatsabouts
Kilsyth is a narrow strip of land about 200 feet above sea level, between the Kilsyth Hills and the River Kelvin. The town occupies a sheltered position in the Kelvin Valley, between Kirkintilloch to the west and Falkirk in the east, with the “Tak Ma Doon Road” from Stirling heading from the north to Cumbernauld in the south. The North Lanarkshire town has always been one of the main routes between Glasgow, Falkirk and Edinburgh, and is very close to the Roman Antonine Wall, and the Forth & Clyde Canal.
There is archaeological evidence of a settlement since Neolithic times, before The Romans got in on the act building forts at Colziumbea and Castle Hill  as well as the Antonine Wall forts of Bar Hill and Croy Hill which are clearly still visible from the town. In the Middle Ages its central narrow location made it the prime site for two castles at Balcastle and Colzium which have since been destroyed.
The Civil War Battle of Kilsyth took place on hillsides between Kilsyth and Banton, as part of the Wars of the Three Kingdoms in August 1645. The battle was another victory for the Royalist general Montrose over the Covenanters despite a numerical disadvantage and marked the end of William Baillie's pursuit of the Royalist forces.


Modern day Kilsyth is now more of a commuter town to nearby Glasgow, having a high proportion of council housing, built during the 1950’s replacing old miner’s rows and run down accommodation. The town can also claim to be the birthplace of the winter sport of curling. The Kilsyth Curling Club was formed in 1716 and is the oldest surviving club in the world. The sport has been played in Kilsyth since the 16th century on the Curling Pond in the Colzium Estate in the east of the town. 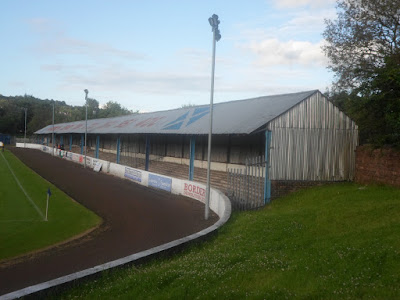 Nicknamed “The Wee Gers” Kilsyth Rangers formed in 1913 and have won the Junior Cup on two occasions. The first of which was in 1955 against Duntocher Hibs, when a huge Hampden Park crowd of 64,976 saw the game end in a 1–1 draw. Less than half that figure saw Kilsyth win the replay 4–1 with all four goals scored by Alex Querrie, the club’s most prolific striker, who is the only player to achieve this feat in a final (so far)

The Wee Gers were red hot favourites to win the trophy two years later but narrowly lost the 1957 final 1-0 against Banks O'Dee. It was ten years before Rangers again graced the final, winning at the second attempt beating Rutherglen Glencairn 3–1 after a 1–1 draw in the first game at Hampden, which was played in front of 22,000 fans.
The club have won a large selection of cup honours, especially during the 1950’s when they lifted the Stirlingshire Junior Cup eight years running and were twice Central League Champions during that decade. Recent years have brought league and cup success for the first time in a long while. After a gap of 30 years the club won the Central League Division One title in 2002-03 followed by the Superleague First Division title in 2004–05.
The club has been a decent breeding ground for players who have gone onto senior level, including six players who have gone on to win full Scotland caps, such as:James Dougall (1 cap 1932),George Mulhall (3 caps 1960-64),Drew Jarvie (3 caps 1971),David Stewart (1cap 1977),Frank McGarvey (7 caps 1979-84) and Willie Wallace (7 caps 1965-69). 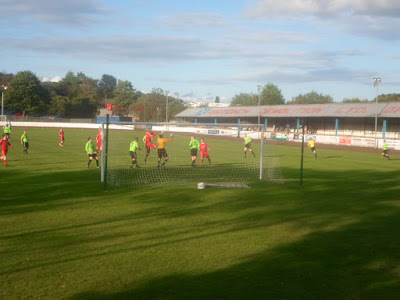 Duncansfield is another belter Junior ground, dominated by the pitch length covered terrace enclosure on the far side. The stand has a con-iron peaked roof with an old advert in large capital letters for Whiteinch Demolition Ltd, with room for 500 spectators. Opposite at the entrance side is terracing with grass banking behind each goal. The main area of the ground has a car park and two separate buildings; the members bar and the changing rooms. A great feature of the ground is its proper player’s tunnel, which leads from the changing rooms, then underneath the terrace and onto the pitch between the dugouts. There is also a perimeter track and 4 sets of lights on each side.
The current capacity is set at 2,000 but the record attendance at Duncansfield Park is 8,740 for a Scottish Junior cup tie against Broxburn Athletic in 1951 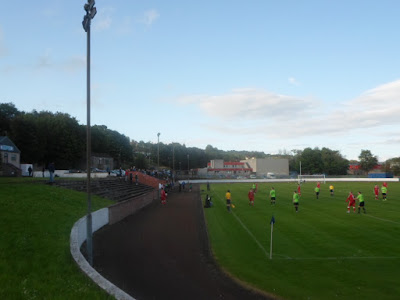 The Wee Gers were in pre-season action for the first time this season against St Roch’s. Before the match I was outside the changing rooms and I overheard one of the team managers telling his team, that this ISN’T a pre-season friendly and to treat it as a competitive match. Judging by the performance and result I’m guessing I had earwigged on the away dressing room.
Kilsyth donning a red changed kit fielded an inexperienced side and were punished for some sloppy play. They went a goal behind when a cross was cut out by the defender who headed past his own ‘keeper after quarter of an hour. Just before the break Jordan Logan banged in a brace, the first with a mazzy run and good finish, before finding the bottom right hand corner again after good work from Mussa. The big number 19 for St Roch’s looked a good player, his stance and movement reminded me of Mario Balottelli, but thankfully he has a good attitude and no stupid haircut. It was he, Baboucarr Mussa who made it 4-0 ten minutes from the restart with a close range finish, before being subbed along with his strike partner Logan.
Kilsyth played much better after the fourth goal, after rearranging the back-four and adding a bit more width, they looked much better going forward, but were unable to find the net and the visitors comfortably kept the clean sheet in a good pre-season performance. 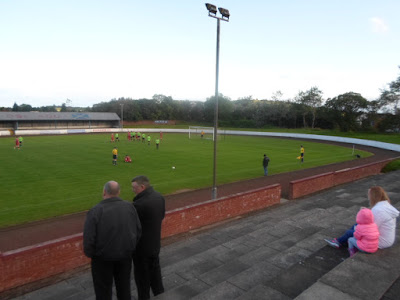 My Matchday.
My trip to Glasgow was on the 1239 from Newcastle to Edinburgh, then for a change I caught the bus between the two cities. That’s because it cost a quid on the bus, yes just 100 British pence if you book on the Megabus website, so there’s a handy tip for fellow football travellers. The 89 bus to North Lanarkshire took a good 50 minutes, but the bus stop as it turned out is just outside the ground. When I arrived I was approached by Russell from the club committee who took me inside the Members Club and made sure I got a cuppa tea and sorted out a pin badges, courtesy of fellow committee man John. I had a chat with some of the Kilsyth fans in the bar, all good crack and very friendly.


After the match, I made sure I caught the last bus back to Glasgow, arriving at the bus stop with plenty of time to give the breadknife a ring to let her know I was still alive. Before heading back to my digs I stopped off at the Bon Accord on North Street for a night cap, which was recommended via a Facebook comment by Paul “Splodge” Proctor. Overall a great first day in Glasgow and another day to look forward to when I’ll be heading to North Ayrshire for the second part of my Kil’ Rangers double at Kilwinning.

Footnote
I'm in the process of writing a book on the winners of the Scottish Juniors Cup over the last 50 years, so I'll be writing a more detailed piece on Kilsyth Rangers with a few added extras.
on July 23, 2015
Email ThisBlogThis!Share to TwitterShare to FacebookShare to Pinterest
Labels: Kilsyth Rangers, St Roch's

Great post - I especially loved the wee tunnel the players have to go through. Completely unnecessary but gave the ground a champions league feel!

When are you going to Kilwinning?

I went the following night. Report is now on the blog.