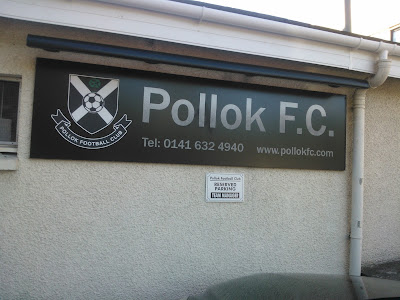 Just when I was beginning to think my football season was finally over, along comes another invitation to a game, as I joined Katie and Lee for our third road trip to the west of Scotland in the space of a week. Last Wednesday we travelled to Wishaw then on Sunday we were in Kilmarnock for the final of the Junior Cup. Auchinleck Talbot captured the biggest cup prize in Scotland, and they were in cup action again with a semi final tie at Pollok, a club I’ve been really looking forward to visiting (must be the black ‘n’ white stripes...Ed) as part of my book quest to visit the winners of the Scottish Junior Cup.

Whereabouts and Whatsabouts
With a population of around 8,000, Shawlands is a district of Glasgow located less than 2 miles south of the River Clyde. The area consists mostly of tenement flats and is surrounded by the neighbouring districts of Crossmyloof, Langside and Pollokshaws. The nearby Queen’s Park was developed in the late 19th century in response to the increasing population on the south side of the Clyde, with the need for open spaces within the large community. The park was opened in 1857, designed by Sir Joseph Paxton and dedicated to the memory of Mary, Queen of Scots - who lost the Battle of Langside near the park. The entrance to Pollok FC is just south of Shawlands at the other side of the White Cart Water in Newlands. 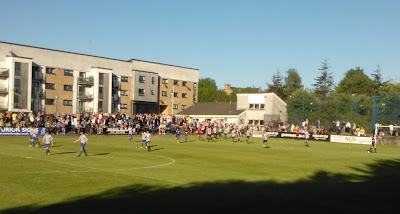 Plantpot History
Pollok were formed back in 1908 and had their first successful period during the Second World War years, winning the Glasgow Junior Cup and the Glasgow Dryburgh Cup in 1941-42. They won more honours during this decade and also reached the semi finals of the Junior Cup in 1944-45. In the quarter-final they beat Fauldhouse United after a protest, winning 3-1 in the replay in front of a crowd of over 15,000 at Newlandsfield. Many spectators had to leave the ground as they were unable to see any of the match action, so they headed to the Pollokshaws East Station just 50 yards away, where for the price of a platform ticket they had a birdseye view of the game. In the semi finals they lost out to eventual winners Burnbank Athletic 1-0 before a crowd of 25,000 with the ground full signs going up an hour before kick off. 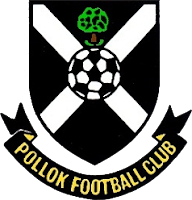 The club benefited after the demise of senior club Third Lanark in 1967, with many fans switching their allegiance to their south side neighbours. The club won the Central League Cup for the first time in 1978 and lifted the trophy on eight further occasions, the same number of times they won the Central Division from their first title success in 1978-79.
The Scottish Junior Cup first took residence at Newlands in 1981, beating Arthurlie in front of a crowd of over 13,000 at Hampden Park with Norrie Fulton grabbing the decisive goal. Pollok followed up this success in 1985, returning to Hampden to beat Petershill 3-1 in the replay after a 1-1 draw, but missed out on the double the following season, losing 3-2 to Auchinleck Talbot in the centenary final.
The 1990’s was a hugely successful period for the ‘Lok including a third Junior Cup triumph in 1997, defeating Tayport 3-1 in the final at Motherwell’s Fir Park. However disappointment followed twelve months later as Arthurlie finally gained revenge for that ‘81 defeat by gubbing Pollok 4-0 at Fir Park.
Following the reconstructing of the Junior Leagues in 2002, Pollok were placed in the West Region Super League Premier Division. The ‘Lok were the first club to win the division and have been champions in 2004-05, 2006-07 and 2007-08, making them the division’s most successful club. Those last two triumphs coincided with the SFA inviting the winners of the 3 major Junior leagues and the Junior Cup winners to take part in the Senior Scottish Cup. Pollok overcame St Cuthbert Wanderers and faced Montrose in the 2nd round, achieving a 2–2 draw at Links Park, but narrowly losing the replay at Newlandsfield, then the following year they were knocked out by Spartans FC in the 1st round.
Last season Pollok were relegated for the first time following a disastrous season, having four different managers and the club also entangled with off the field problems. This season under the guidance of Tony McInally they’ve comfortably won the league, so they’ll be back in the West Region’s top division next season. 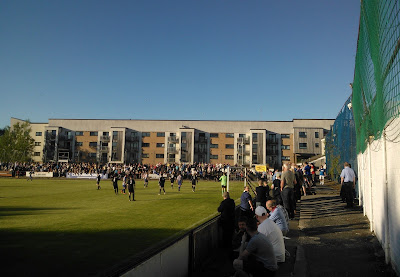 The southsides local team began life at Haggs Park in the Pollok Estate, but were forced into a move during the 1926-27 season when the city council wanted the land for school pitches, despite the club spending hundreds of pounds on improving the facilities. After playing temporarily at Rosebery Park and the Queen Mary Tea Gardens in Thornliebank  they acquired Newlandsfield Park in 1928.
The ground is a gem, made up of terraces on all four sides, dominated by a 1,500 covered enclosure on one side. The roof is decked out in black and white with the club and ground name proudly displayed in the centre. The dugouts are in front of the stand and opposite there's now a row of apartments to block the view from the train station. The changing rooms and social club are in the corner beside the paying entrances. Newlandsfield is without floodlights and has an overall capacity of 4,000 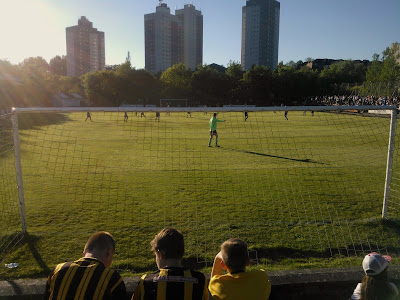 The Match
Talbot were looking for a hat-trick of wins in this competition and another trophy in what's been a terrific season for the Bot. They took the lead after quarter of an hour when following on from his magnificent strike in the Junior Cup final, Dwayne Hyslop scored with a much simpler task to fire in a right wing cross from twelve yards. At the interval I expected the Super Premier champions to march into the final but the 'Lok had other ideas in what was a cracking second half.
Tam Hanlon equalised from the penalty spot following a handball ten minutes after the restart, then moments later their job was made easier when McCulloch totally lost his rag. He was shown a red card after pushing over an opposing player, before arguing the toss with fellow players and the referee, then to top it all off on his way to the dressing room he chinned the corner flag!
Pollok instantly took advantage of the extra man when Robbie Winters was on hand to head home a right wing cross from close range to make it 2-1 on 57 minutes. It was Gordon Pope who scored the decisive winning goal in Sunday's final with a coolly taken penalty, but he was denied from 12 yards this time 'round as Longmuir pulled off a fine save in the 67th minute. Talbot pressed for an equaliser and were rewarded a few minutes later when a free kick from a central position found Graham Wilson, who showed good control to pick the ball out of the air and finish neatly from ten yards.
Auchinleck should've had the tie wrapped up late on but were denied by some stunning saves from Jordan Longmuir who took the tie into a penalty shoot out after keeping the score locked at two apiece. After a man of the match performance from the Pollok 'keeper I fully expected him to again produce something special and he didn't let me down, saving twice to book the 'Lok's place in Saturday's final against Blantyre Vic's, winning the penalty shootout 3-2. 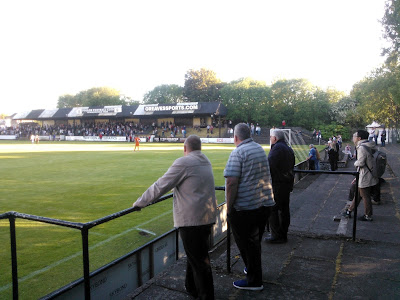 My Matchday
Due to the usual heavy tea time traffic I got picked up later than we planned, which meant we didn't pull into the Morrisons car park outside the ground until 7pm. Although we missed out on our usual Wetherspoons tea, I wasn't going to be denied another tick so I ran along to the  Sir John Stirling Maxwell by myself for a swift pint.
I was back home much later as well, so there was just 4 hours sleep before graft this morning, but I’ll happily sacrifice that much needed extra kip for what turned out to be one of my favourite grounds out of the 67 I’ve visited this season.
Not only was it it a cracking ground but the match was entertaining as well and a good one to finish the season on, which means that I can now finally make it official, after 116 matches and 447 goals, I’m declaring the end of the brilliant football season of 2014-15.

Footnote
All going well I’m in the process of writing a book on the winners of the Junior Cup over the last 50 years, so I’ll be writing a more thorough piece on my matchday at Pollok. This chapter will also include my life on the motorway and Never Mind The Polloks Here's ThE 100 GrOUndS ClUb.
You can check the progress and a map of the grounds on my list on the T’Do Page.
on June 11, 2015
Email ThisBlogThis!Share to TwitterShare to FacebookShare to Pinterest
Labels: Auchinleck Talbot, Pollok