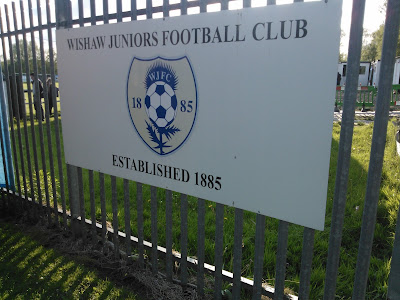 I had resigned myself to the fact my groundhopping was over for this season, before receiving a message from my favourite Kiwi asking if I fancied a midweek trip up to Wishaw. The Scottish Juniors have become my new obsession this season, and although Wishaw Juniors aren’t on my “T’do list” I welcomed the chance of bagging another new ground. 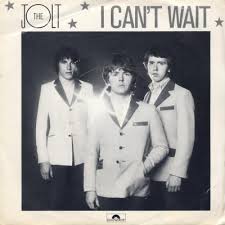 Wishaw is a town and former burgh in North Lanarkshire on the edge of the Clyde Valley, found 15 miles south-east of Glasgow. The settlement in the area dates back to the 12th century when St. Nethan established a kirk dedicated to St. Michael by a bend in the Clyde near what became Netherton. The area then became known as the parish of Cambusnethan until the Scottish Reformation. The site of the original church remains as a ruined burial ground, including a majestic mausoleum to Lord Belhaven, The village itself was laid out in 1794, later renamed Wishawtown, before incorporated with the villages of Coltness and Stewarton to form the Burgh of Wishaw in 1855.
Famous people that hail from the town includes world snooker champion John Higgins aka “The Wizard of Wishaw” and new wave modsters The Jolt who build up their following gigging at the Crown Hotel in Wishaw. They enjoyed moderate success during the early new wave era and became forerunners to the mod revival in the late 70’s. They moved to London and signed to Polydor Records, releasing an album dedicated "to the memory of the Saturday lunch times at Wishaw". The band supported the likes of The Jam, The Stranglers, Generation X and Ultravox, before splitting up around 1979. 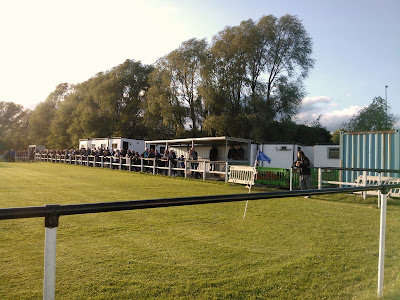 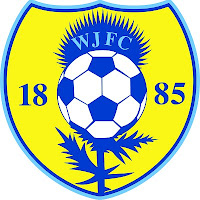 Wishaw Thistle founded as a Junior club in the 1880s, enjoying instant success by winning the Lanarkshire Junior Cup in three successive years from 1886, before becoming the second club to lift the Junior Cup, beating Mayhill 3-1 in the 1888 final(far too early to feature in the book...Eddy)
The club hosted Liverpool and Everton in their formative years as well as Notts County when they were English champions. Following the Junior Cup success they turned Senior and played within the Senior ranks until football recommenced at the end of the First World War, when they restarted as Wishaw YMCA Juniors. The name was changed to Wishaw Juniors in 1924, winning the Lanarkshire League and Cup the following season. More league titles were added in 1934-35 and 1945-56, with the county cup won four more times, the last of which was in 1966. The club also won the West of Scotland Cup in 1934 and their last honour came in 1967, when they won the Lanarkshire Hozier Cup for the fifth time. The club currently play in the Scottish Junior Central District League Division One. 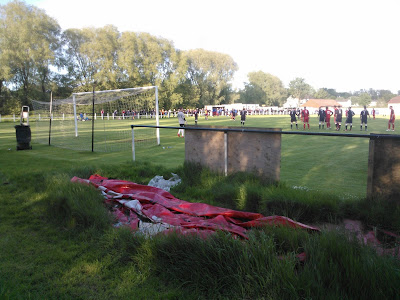 Wishaw Juniors originally played at Stewarton Street and then at Belhaven Park, the site of the former Wishaw Dog Track. For the majority of their history they were based at Recreation Park on Kirk Road until the ground closed in the early 1990s. This lead to a groundshare with Coltness United for a number of years until 1999 when they secured a tenancy at Wishaw Sports Centre. This was the first of two spells at the ground, with another period sharing with Coltness in between.
The club moved to their current home at Beltane Park, securing a 10 year lease for the start of the 2011–12 season. The ground has been transformed from a basic park pitch with perimeter fencing around the pitch and a small terrace cover on the east side. All the amenities are set back from the pitch in portacabins,  installed at the venue are toilets, a snack bar, a players lounge and chancing rooms. The rest of the ground is grass standing with one metal framed dugout on each side. 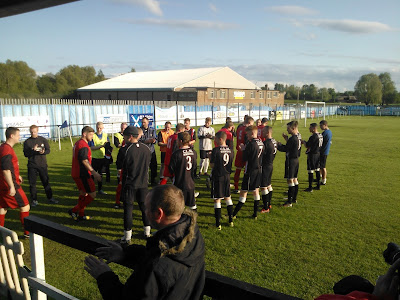 The Match
I saw Wishaw Juniors earlier this season winning a penalty shoot out in the Central League Cup at Cambuslang. The club went onto reach the semi-final of the competition, where they lost to Kilwinning Rangers. Tonight they were back in league action against newly crowned Central District First winners Blantyre Victoria, who were confirmed as champions just 48 hours earlier after a 2-0 home win over Vale of Clyde. The hosts provided a guard of honour for the title winners and they still had something to play for themselves at the other end of the table. After falling behind to a goal by David Galt who finished off a quick breakaway from a Wishaw corner with a clever chip over the keeper, their chances improved when Blantyre were reduced to ten men. The Vics number 6 was giving a yellow card after reacting badly to a foul, then a few minutes later he received a straight red card which was sealed with a Glasgow kiss.
Just before half time a free kick from the left was volleyed in at the far post by Paul McGeogh which gave Wishaw a huge lift which they took into the second period. The winner came seven minutes from time when Kevinbarry Grant, who was unlucky with a first half effort which smacked off the upright, was on hand to fire in after a goalmouth scramble, to the delight of his Dad, who I was standing next to when the decisive goal hit the back of the net which secured safety for Wishy. 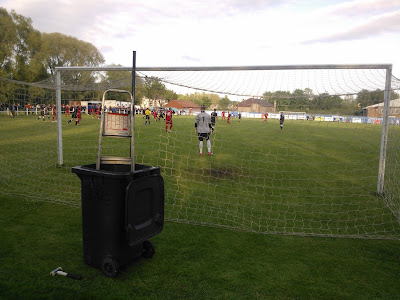 My Matchday
After travelling to plenty of grounds with Katie and Lee this season I don't need to tell my dozen or so readers, the usual routine, just that the JDW this week was the Wishaw Malt on Stewarton Street. I posted our plans on Twitter so when we arrived at the admission hut, Robert the club secretary greeted us and although we hadn't asked, he was kind enough to have reserved a match programme for each of us, so once again another Junior club showed great generosity and made us welcome. I’d like to take this opportunity to thank Katie aka “My favourite Kiwi”  for driving me around various grounds this season. I hope I’ve been a model passenger and I’m looking forward to one final trip this season as we head to Kilmarnock for the Junior Cup final this Sunday. 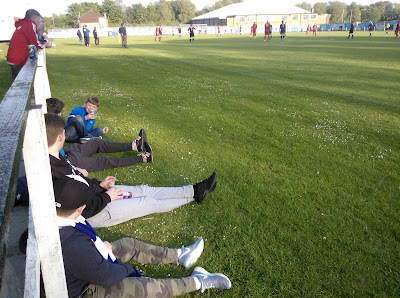