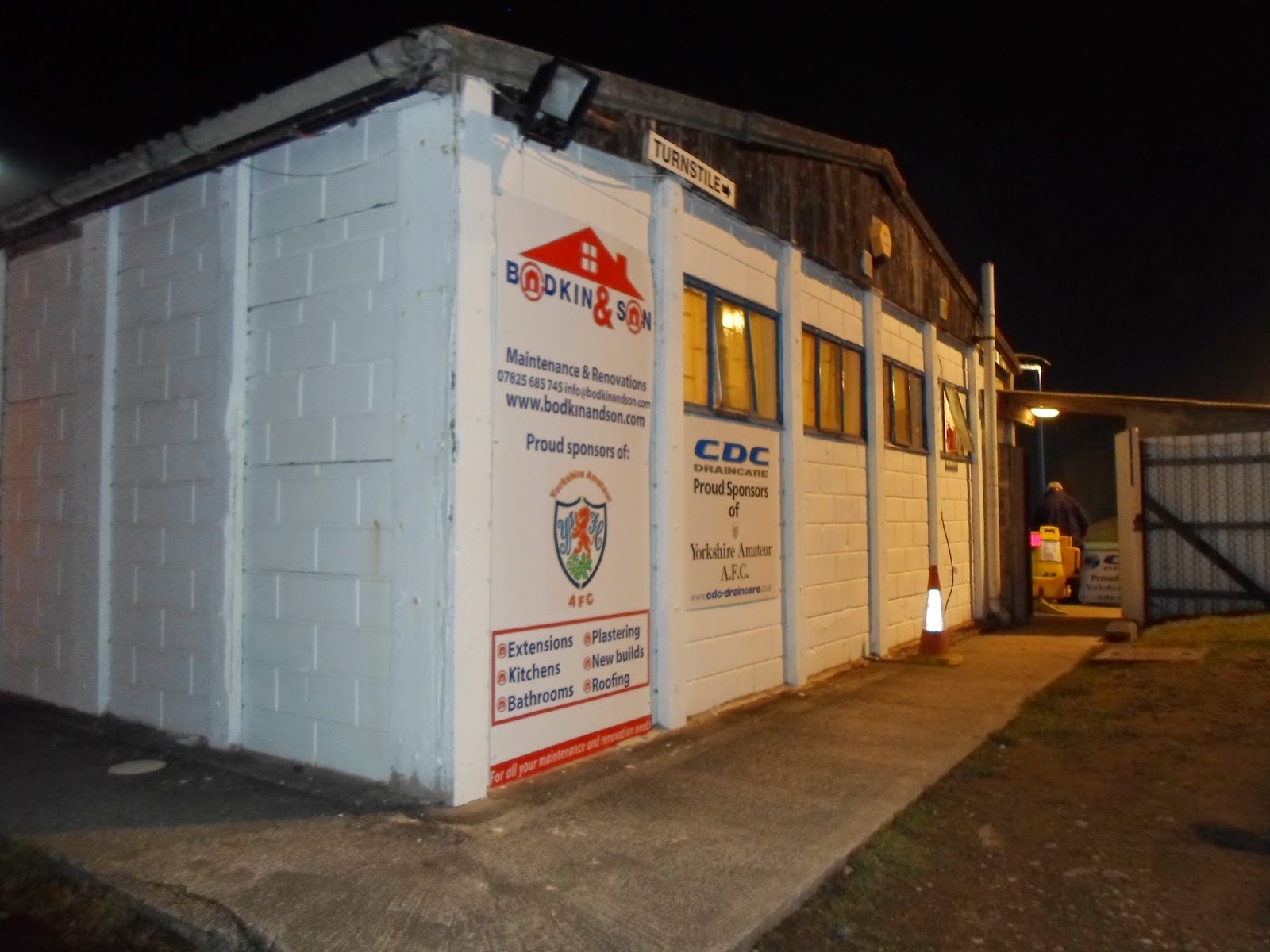 Another midweek Northern Counties East ground courtesy of the Katiemobile, off to Yorkshire Amateur for their Division One fixture with Grimsby Borough.

The club are based in Harehill in the inner-city area of east Leeds, situated approximately 1 mile north-east of the city centre, just south of Chapel Allerton and Roundhay.  The area is basically a south-facing slope, with many streets of terraced houses on hills. In the middle off Harehills Road is Banstead Park, a grassy slope with trees and play areas, giving a view over the city of Leeds 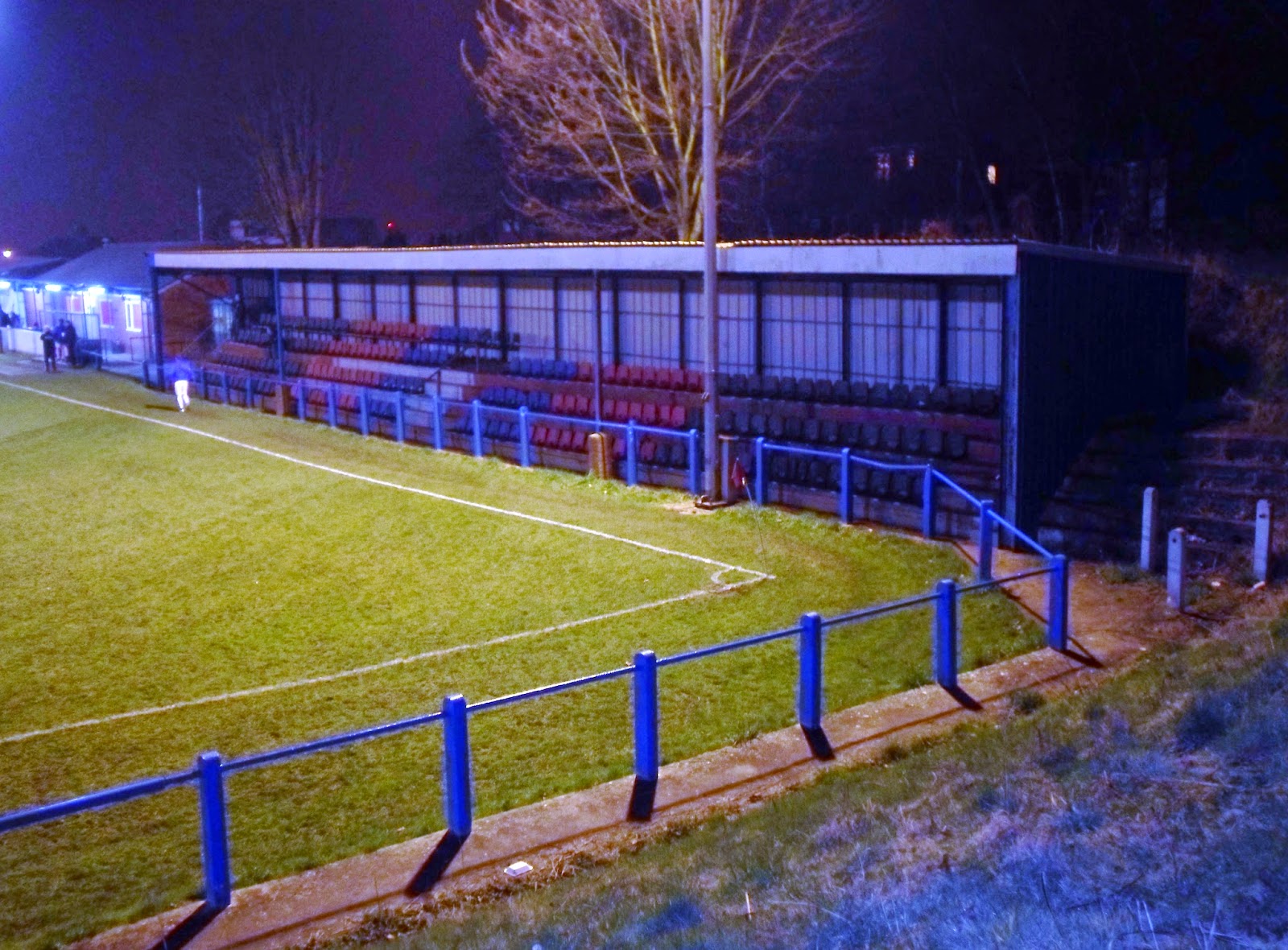 Plantpot History
Yorkshire Amateur A.F.C. was formed by local man Kolin Robertson in Leeds in November 1918. The club started life playing friendlies at Elland Road, after gained a ground lease before it was sold to the newly formed Leeds United for £250 in 1920.

The club were founder members of the Yorkshire Football League in 1920–21, but left the set up in 1924, before returning six years later. During this period they became the first ever football club from Britain to tour the Eastern European countries of Latvia and Estonia.
The club played in the Yorkshire League for just over half a century, winning six league titles within its three division, until joining the newly formed Northern Counties East League in 1982.
The club have won cup honours in the West Riding and reached the 1st Round of the FA Cup for the first time in 1931-32, losing 3-1 to Carlisle United. During the same season they also reached the semi-finals of the FA Amateur Cup and were crowned champions of Division One for the one and only time. 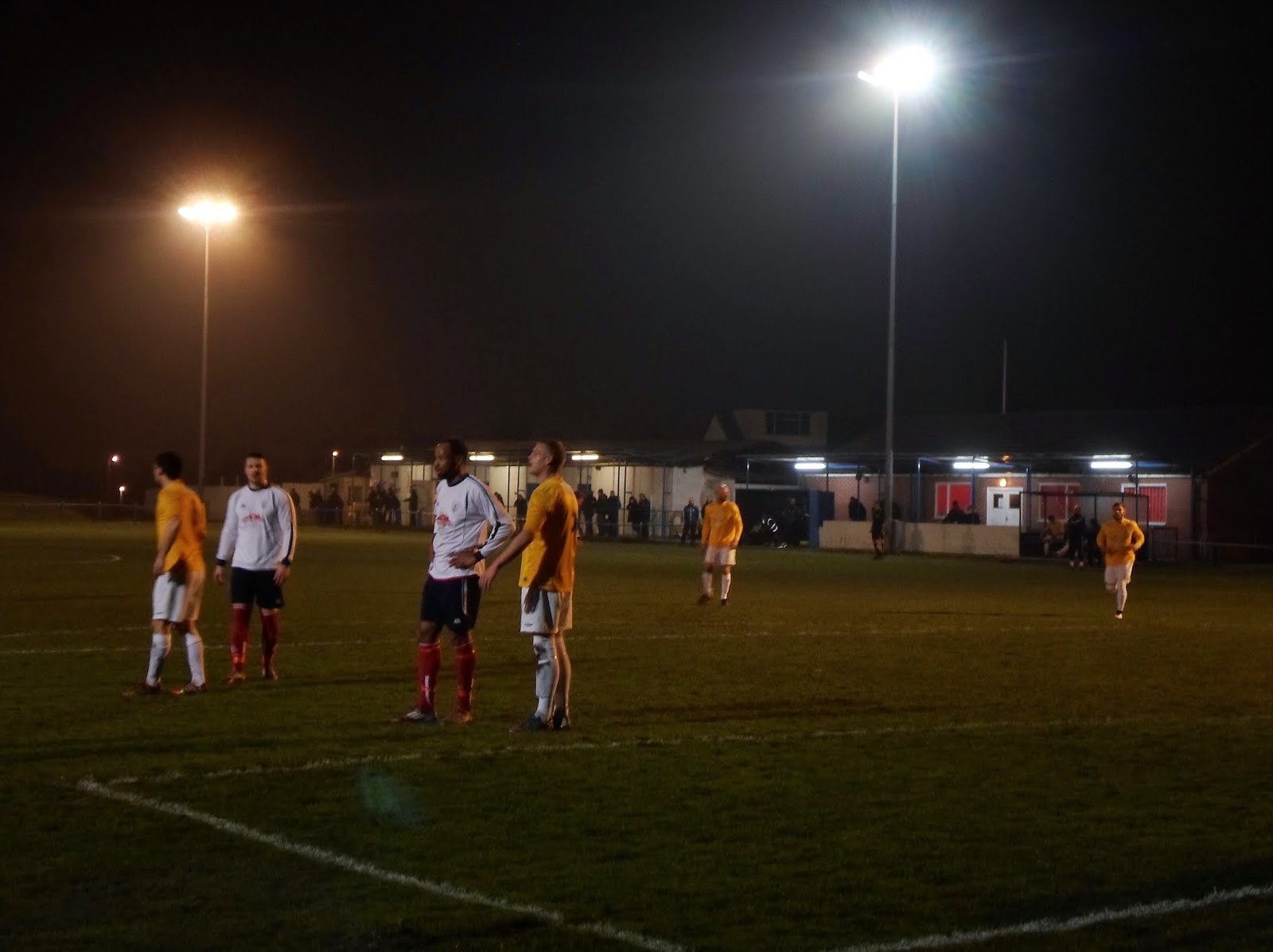 Yorkshire Amateur played at various grounds once leaving Elland Road, including sharing with Harrogate Town. They moved to Bracken Edge in 1930, which was originally a rugby ground and home to the Roundhay Club, who vacated the premise, moving to Street Lane.
The first football match took place on the 6th September 1930 against Goole, with the players using old wooden rooms at a nearby housing estate.

The original stand was condemned after the Bradford fire and replaced by new changing rooms with an overhang shelter.  The clubhouse is next to the paying gate, which also has a covered shelter over the terrace. The main stand is at the bottom, running up from the corner flag to the dugouts, decked up with a mixture of 200 red and blue flip seats across three rows. The other three sections of the ground is open with hard standing and grass banking. The overall capacity is 1,550 with the record attendance of 4,000 set back in 1932, for an FA Amateur quarter final with Wimbledon. 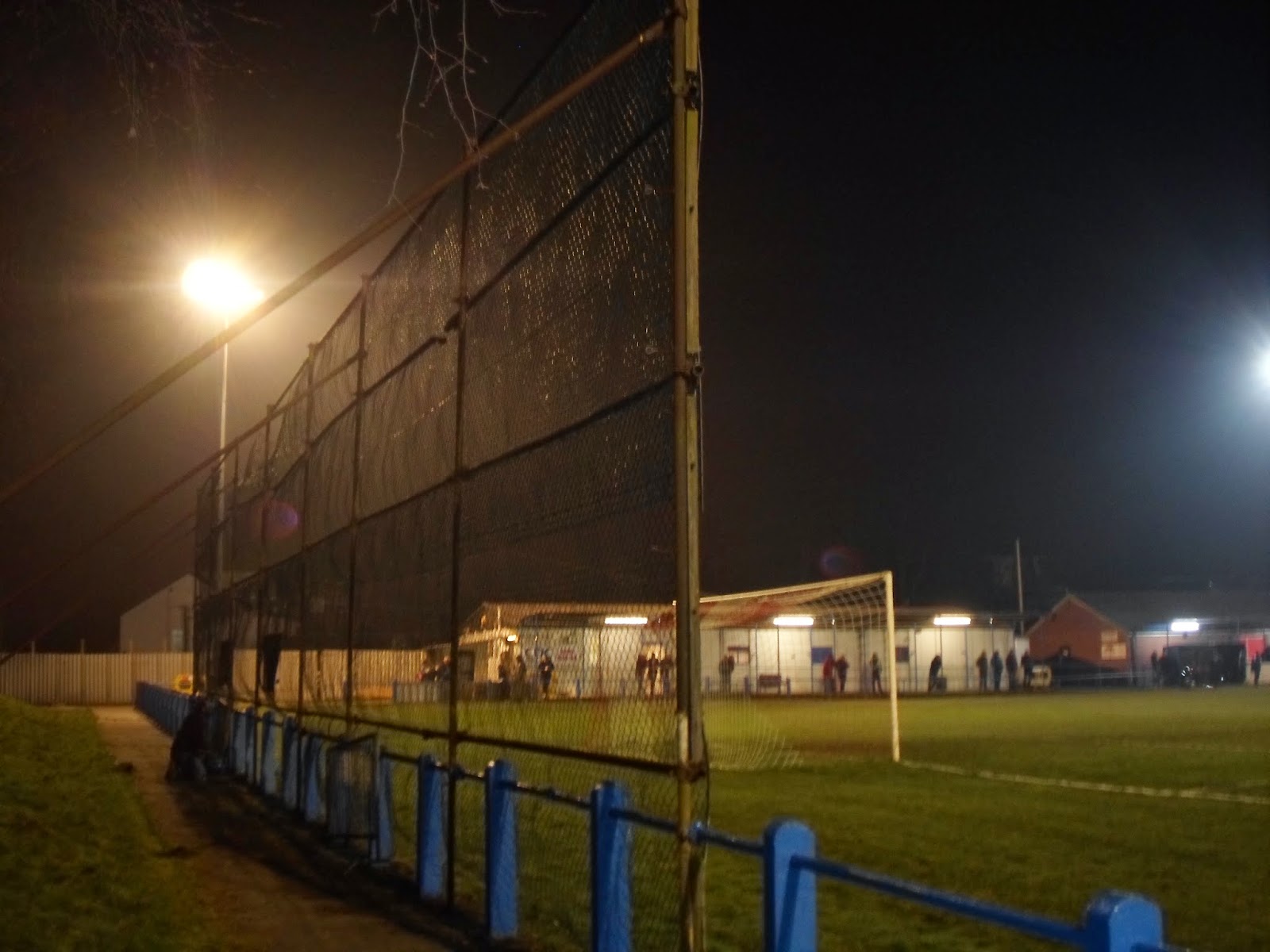 The Match
The Amas faced bottom of the table Grimsby Borough, who went into this game with just a solitary victory and a goal difference of minus 94.
The expected goal fest was put on hold as Borough made a promising start, but fell behind in the 20th minute when Craig Heard danced around the defence before firing home.
The hosts took full control of the match courtesy of a second half hat-trick from Harrison Blakey. On 55 minutes he produced a cracking chest, turn and volley combo to shoot home from 15 yards, followed by rounding off a terrific team goal with twenty minutes remaining.
Good work by Heard set up Blakey for his third, before getting himself on the score sheet for the second time thanks to some unselfish play from Joel Hughes.
So after a sluggish start the Amas finished the match strongly to eventually go nap, while their opponents are now just one short of a three figure minus goal difference. 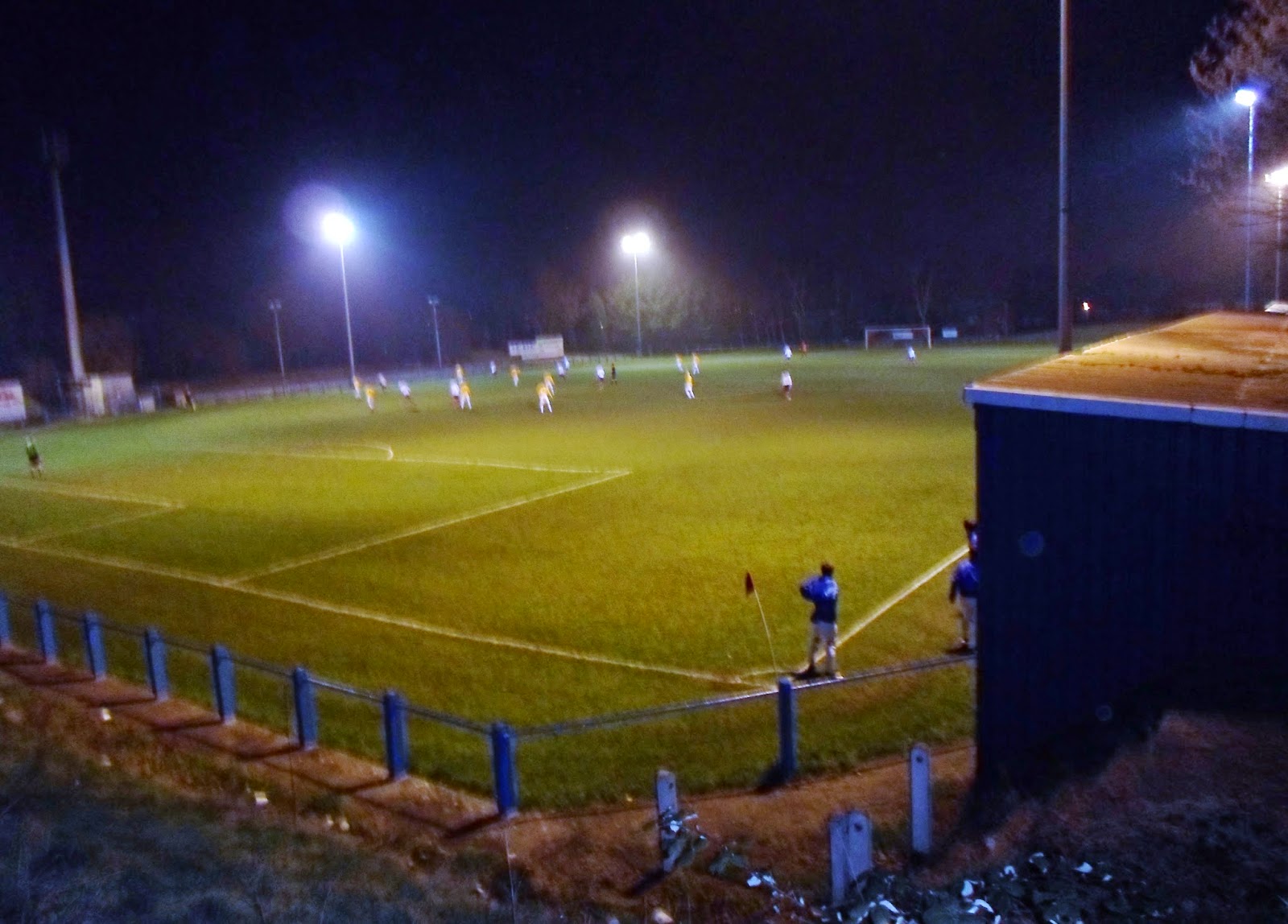 My Matchnight
Similar to our trip to Armthorpe a fortnight ago, the afternoon started with the X1 bus. This time I alighted in Houghton-le-Spring where Katie picked me up, before we headed across to Peterlee to collect Lee.
As our route to Leeds was via the A59 I requested a refreshment stop in Knaresborough. This meant I was able to tick off The Crown and mark off more bevvys from my 'Spoons Ale Festival bingo card. We still had time call to the Three Hulats for our tea and more drinks, as its just a mile from Bracken Edge. The pub was really busy, full of punters wearing stupid hats in celebration of a patron saint of a another country (the likes of which don't have the same enthusiasm for our own saint)
We arrived at the ground just in time for kick off, receiving a warm welcome and were pleasantly surprised how decent the ground is, with a top notch clubhouse.
Another enjoyable night out with the “Celebrity Groundhopping couple” with the only bummer behind the closure of a large section of the A1 on the way back. The long diversion route meant I got home way past my bedtime, but I’m happy enough to live on four and a half hours sleep before going to graft, as long as I can visit another new ground.
on March 18, 2015
Email ThisBlogThis!Share to TwitterShare to FacebookShare to Pinterest
Labels: Grimsby Borough, Yorkshire Amateurs

I actually love this ground, but a nightmare if you go by bus to ground. We (Shirebrook) took a 45 seater there and driver did a superb job getting us up there.