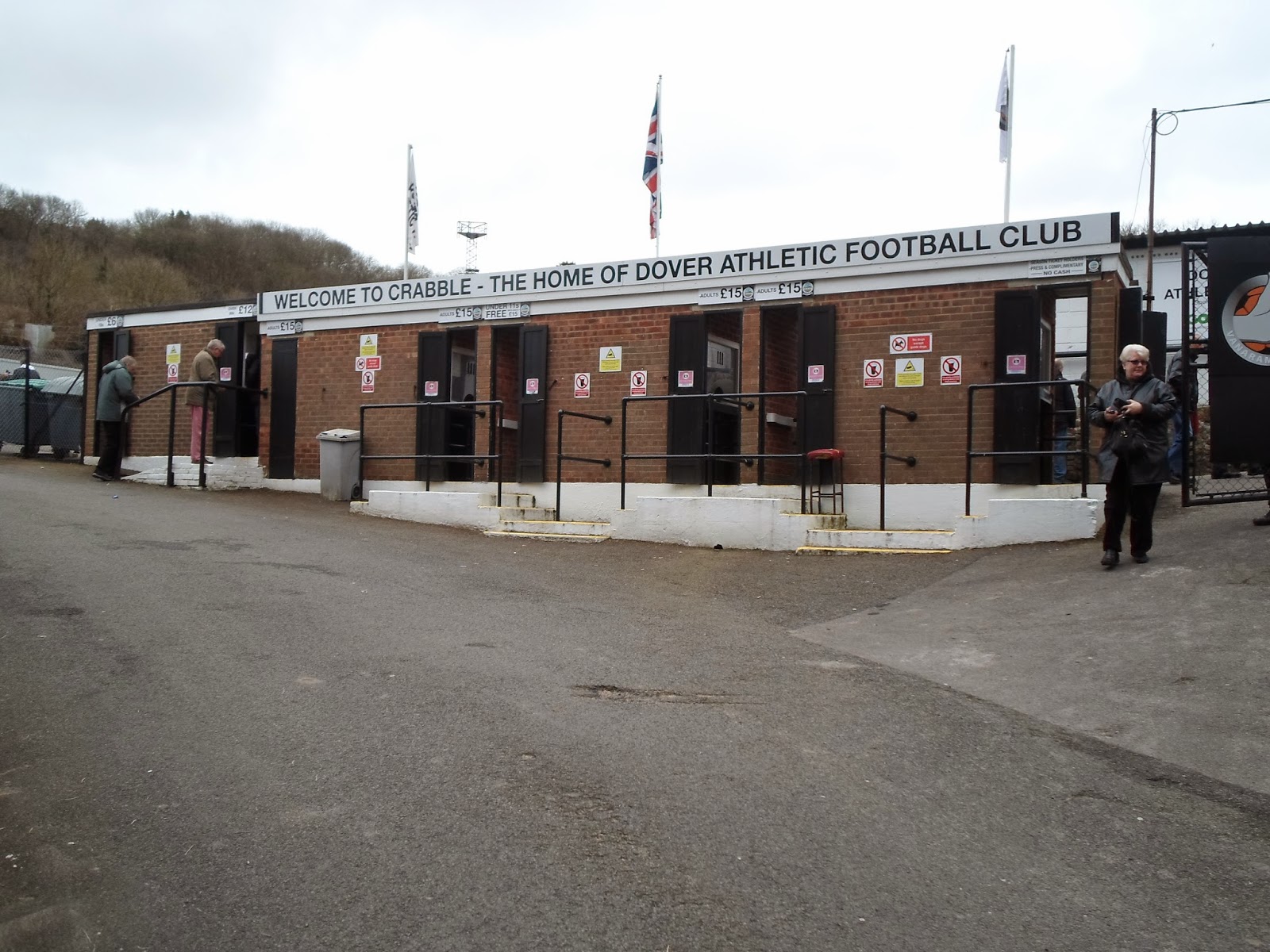 Over the last few years I've just fallen short of completing the Conference and the top 116 clubs, so at long last I've finally achieved my goal after a long tiring journey to Dover Athletic.

Whereabouts and Whatsabouts
Dover is a town and major ferry port in the home county of Kent, facing France across the narrowest part of the English Channel. The town is an administrative centre and home of the Dover Calais ferry through the Port of Dover. The famous surrounding chalk cliffs have become known as the White Cliffs of Dover at the narrow sea passage nearby the Strait of Dover, which may have give England its ancient name of Albion, meaning “white”
The name of the town derives from the River Dous which flows through the town and is also one of only a few places in Britain to have a corresponding name in the French language - Douvres.
Historically the town goes back to the Stone Age, but the coming of the Romans made Dover part of their communications network, connected by road to Canterbury and Watling Street and it became a fortified port -  Portus Dubris. Forts and lighthouses were constructed to guide passing ships and it has one of the best preserved Roman villas in Britain.
Dover was also one of the Cinque Ports during medieval times along the Kent and Sussex coast and has served as a guard against various attackers, most notably the French during the Napoleonic Wars, and against Germany during World War II.  The medieval Dover Castle hails from the 12th century. The largest castle in the country was described as the "Key of England" due to its defensive significance throughout history 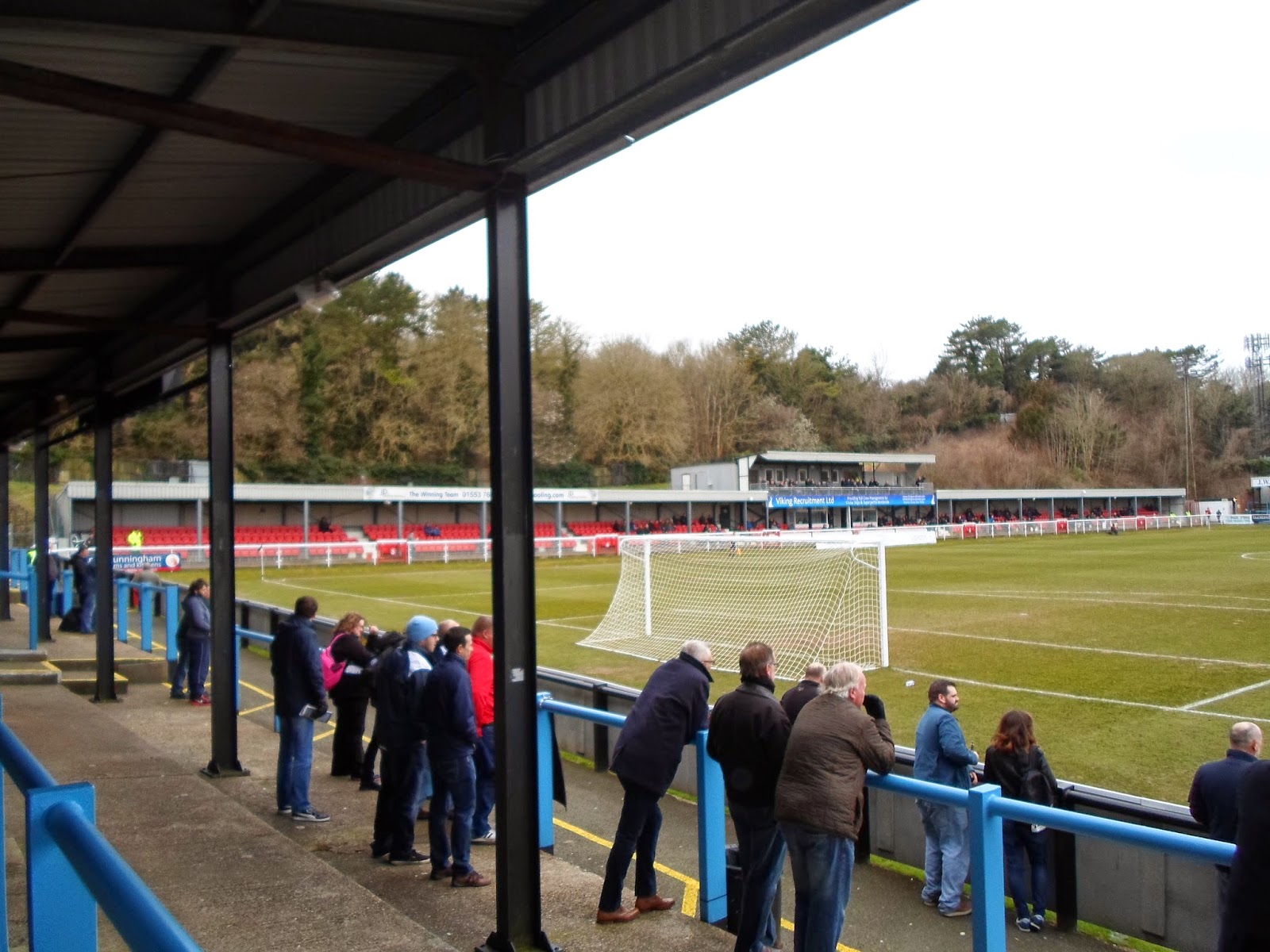 Plantpot History
Dover Athletic Football Club was formed in 1983 after the dissolution of the town's previous club - Dover FC. The town’s original club dated back to 1894, having started life in the Kent League and were members of the Southern League from 1959.

The new club took their place in the Southern League, winning promotion as champions from the South Division in 1987-88. Two years later they won the Southern League championship, but failed to gain promotion to the Conference due to ground regulations. A second league title followed in 1992-93 and promotion was granted after extensive work to the Crabble. They spent nine seasons in the Conference before suffering relegation in 2001–02. The club moved to the Isthmian League Premier Division in 2004, but another poor season coupled with financial problems led to further relegation. Back to back championship seasons from 2007 took The Whites into the Conference South for the 2009-10 season. After five seasons and knocking on the promotion door several times, they returned to the Conference after a twelve year absence, defeating Ebbsfleet United in the play-off final. 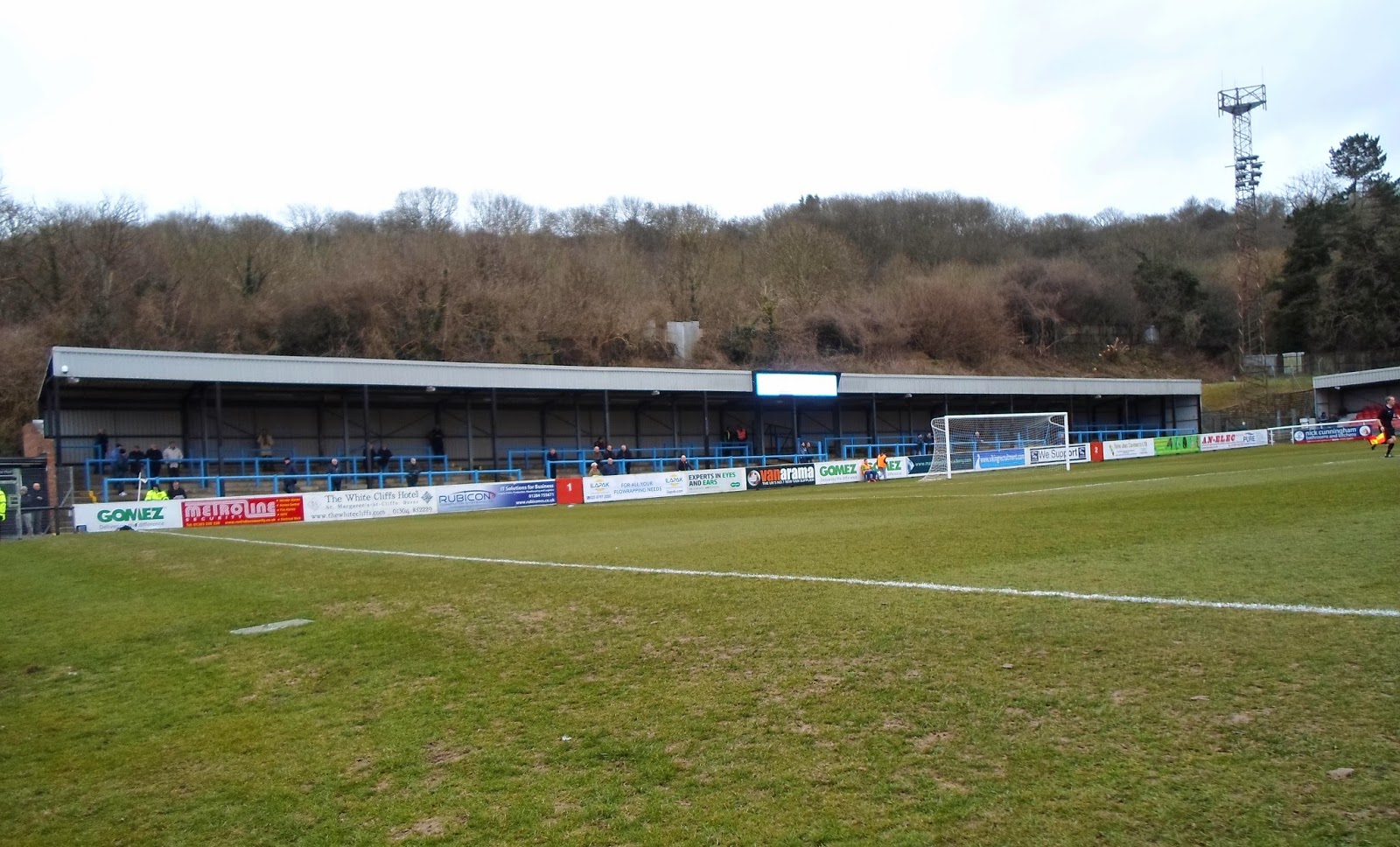 Crabble Meadows opened in 1897 in the suburb of River on the outskirts of Dover. The word “ Crabble” is the name of a local corn mill which derives from the Old English crabba hol, meaning a hole in which crabs are found.
The pitch was shared with Kent County Cricket Club, who were given priority over the football team, which resulted in the council laying out a new football pitch further up the hillside, behind the lower pitch's pavilion. The first match played on the "upper pitch" took place in September 1931, with a small stand being constructed the following year. The football club then used the upper pitch whenever the lower pitch was unavailable due to cricket matches.The final game on the lower took place on the 26th March 1951, and the first on the upper was held eleven days later against Fulham in a friendly, as the club moved there on a permanent basis, initially paying the council rent of £300 a year.
The new grandstand was opened by the Deputy Mayor before a match with Folkestone in August 1951 and the Supporters Association financed a covered terrace behind the town goal. Floodlights were added in 1961 and inaugurated with a match against a Chelsea XI, which included Terry Venables in the side.
This stand runs the full length of the pitch with five rows of red seats. The stand is split by a larger section in the middle for the press and directors lounge at the top.

The work required to bring the stadium up to Conference status at the start of the 90’s included new turnstiles and two new terraces behind both goals. The seating in the main stand was replaced and a second stand was added on the opposite side.
The Family Stand is a small covered all seated stand running up from the Dover End to the half way line. The paying entrance is also on this side behind the dugouts with the clubhouse beside it next to the River End. Both ends are similar looking covered terraces, which have a lot of supporting pillars, with an electric scoreboard on the front of the roof. The capacity of the Crabble is 5,745 with 1500 seats 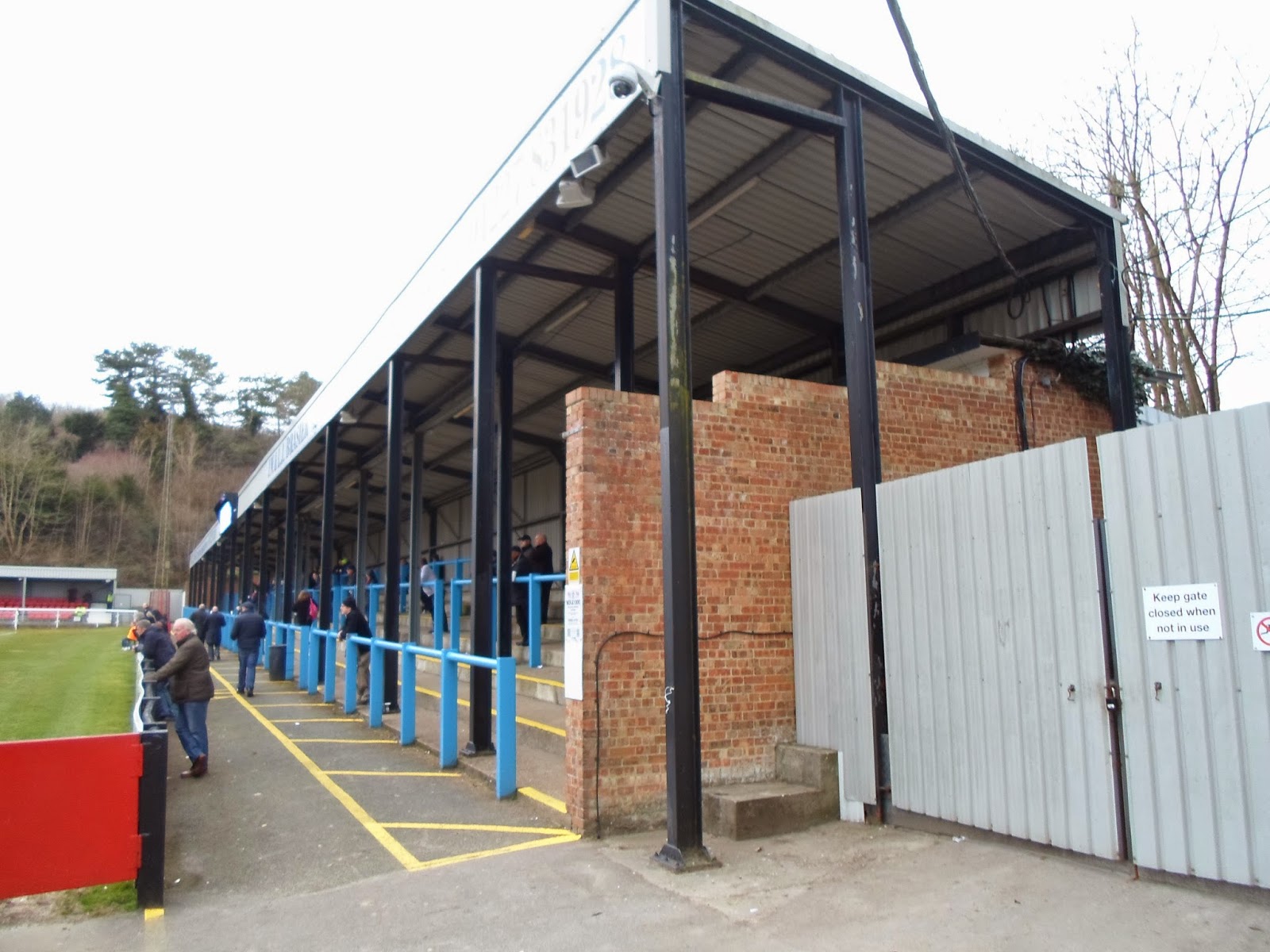 The Match
What a terrible game of football. Mislaid passes, poor crossing and in Gateshead's case not a decent effort on goal. The decisive moment of the game arrived in the 53rd minute when a left wing cross landing in the path of Connor Essam who snack a 20 yard volley past Bartlett.
That's it regarding the key points of the game, the Heed were very poor, very poor indeed and Dover were slightly better...but only just.
To add a bit more misery to a miserable afternoon, the match announcer gave notification of the attendance without mentioning the long journey made by the away supporters and didn't wish us a safe journey home. This is my only recollection of this happening since we returned to the Conference, even Darlington wished us well and that's only twenty odd mile away and not 335 miles and a lot of travelling expense.
Dover are looking to round off their first season back in the Conference with a good run in and a top ten finish. As for Gateshead, after two back to back wins over the last week they blew a golden opportunity to enhance their play-off chances, which was summed up by a Dover fan who I overheard saying to his mate as we departed the ground; "They're not that special Gateshead are they?" 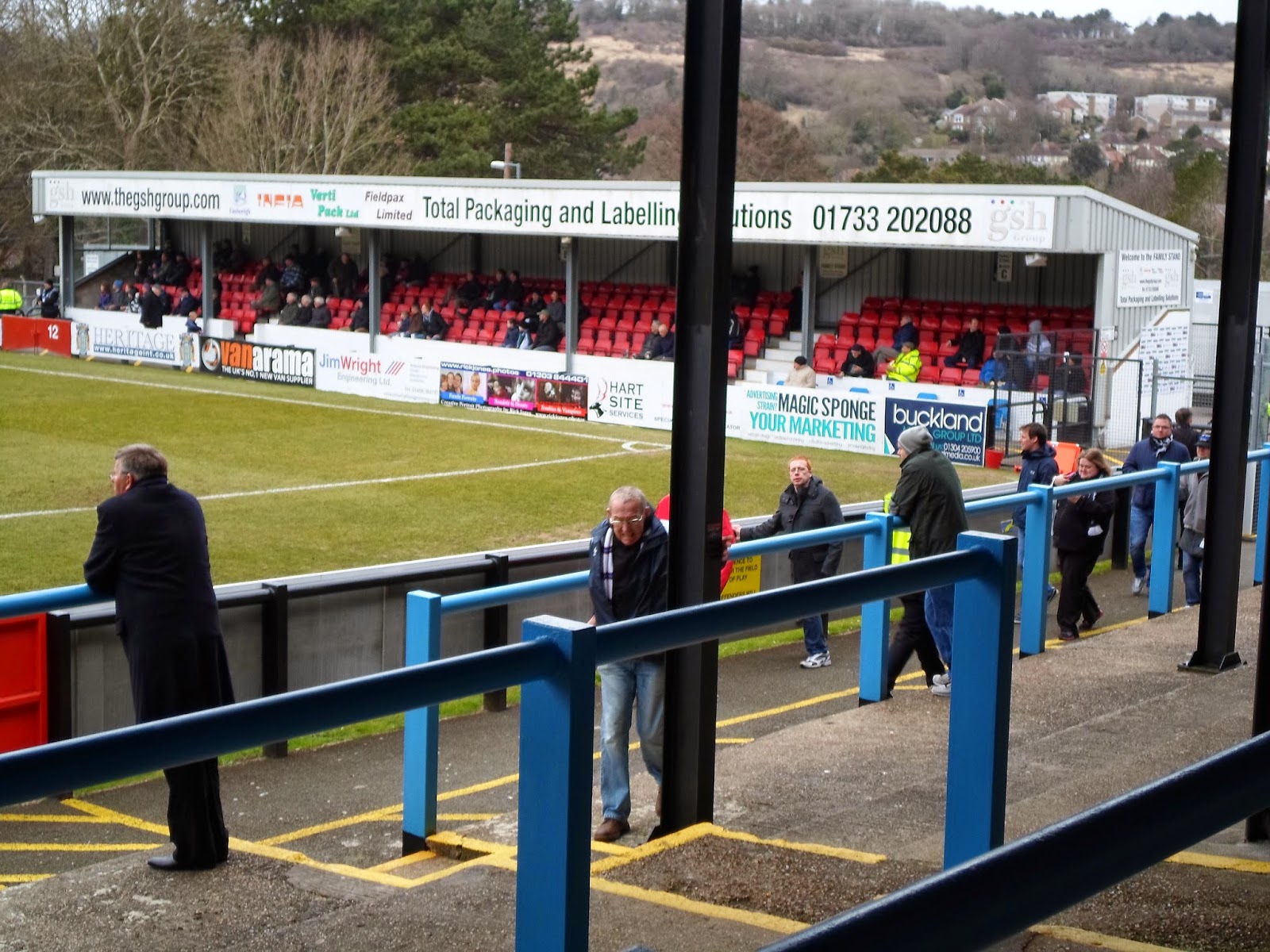 My Matchday
As you would imagine a long journey to the bottom right  corner of the UK, meant an early start for me and my travel companion Honest Paul. The train to Kings Cross, then onward from St Pancras to Dover Priory saw us arrive in deepest Kent at 11.40. This allowed sufficient time for a few pints and a walk down to the seafront, before the long walk up to the football ground.
We had a few drinks in the local Spoons, the quirky Tir Dar Ghlas and also The Lanes micro pub, where the barmaid welcomed us both with a kiss on the cheek. Once we arrived at the ground we still had plenty of time before kick-off for a pint in the clubhouse, but a splendid day out was about to be spoilt by the football.
After the match we needed perking up so we called into the Flying Scotsman in Kings Cross. After watching eleven fannies earlier that afternoon what harm would there be in watching a few more!
We headed home on the 8 o'clock train both knackered after a very long day, arriving back at Newcastle Central Station at twenty minutes past midnight.

After a busy day travelling what was required was a nice relaxing Sunday, but this match was just the first of three this weekend, after a catching up on my sleep I was up and back on the go again, for a trip to the south-west of Scotland for the Lowlands League hop.

Foetoes (25 pictures from the Crabble) 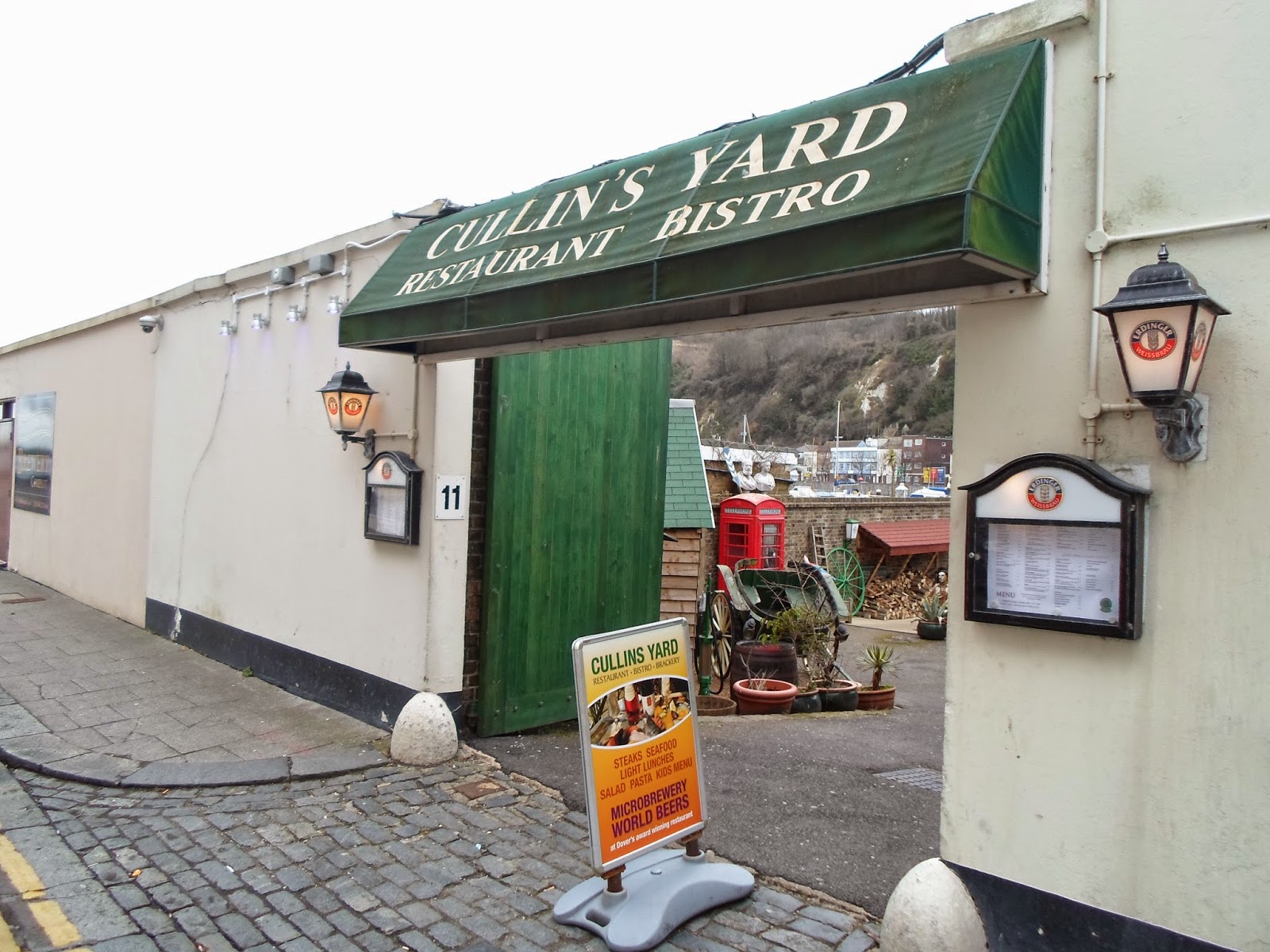