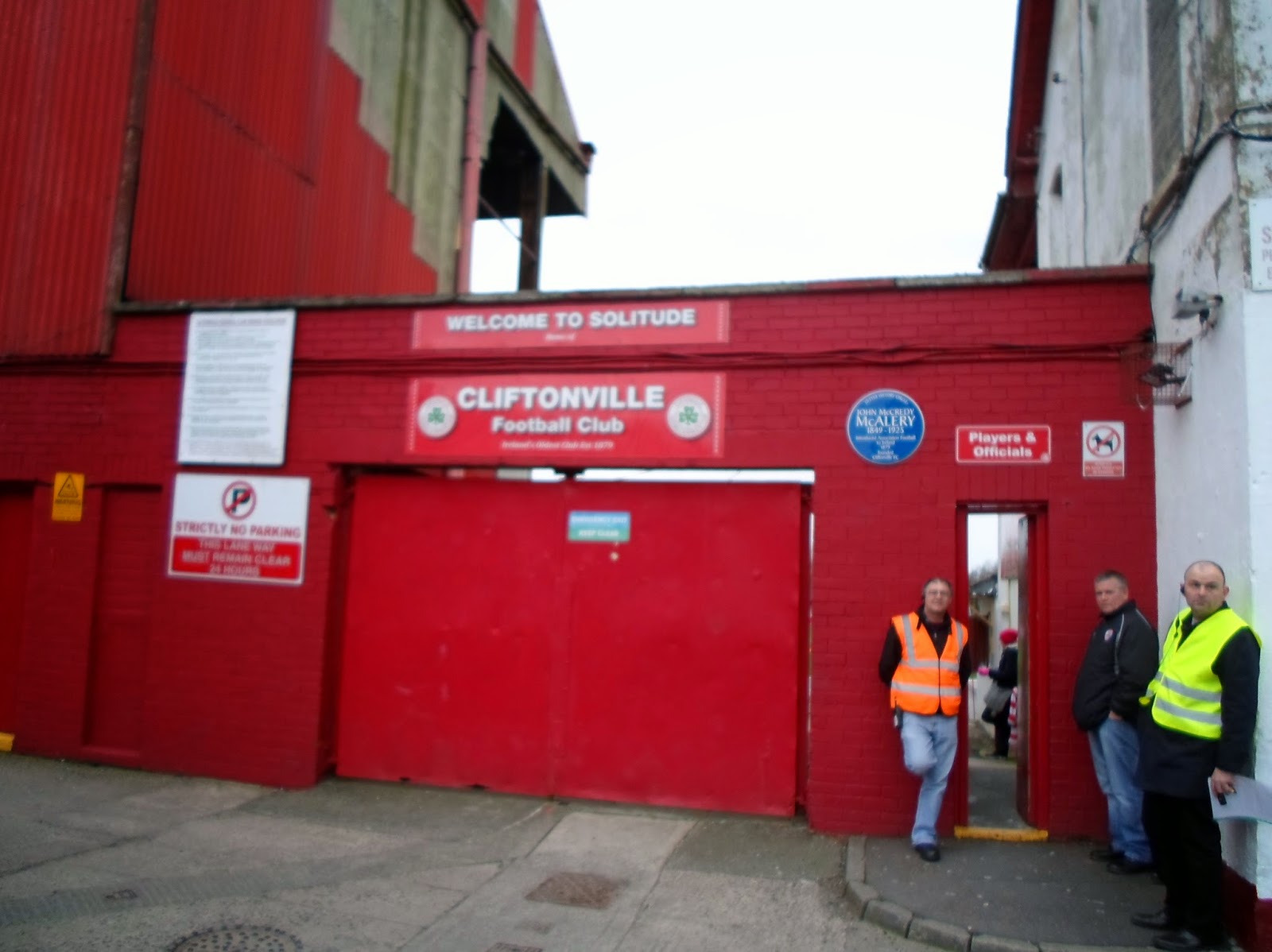 A matchday of firsts …  my first visit to Belfast to visit the country’s first football club at the oldest ground in Ireland.

Whereabouts and Whatsabouts
Cliftonville is a suburb located north of the city of Belfast in the district of Oldpark in County Antrim. It is one of the nine district electoral areas of the capital, containing the wards of Ardoyne, Ballysillan, Cliftonville, Legoniel, New Lodge and Water Works. Oldpark forms part of the Belfast North constituency for the Northern Ireland Assembly and UK Parliament.

Belfast  meaning "mouth of the sandbanks" is the largest city in Northern Ireland and the 17th largest in the UK. Belfast earned the nickname "Linenopolis" as it was once the centre for the Irish linen industry. The city also excelled in tobacco production, rope-making and shipbuilding. The city's main shipbuilders, Harland and Wolff became the biggest and most productive shipyard in the world, building the magnificent but ill-fated RMS Titanic.
Today, Belfast remains a centre for industry, as well as the arts and a pivotal city for higher education, business, and law. The city suffered greatly during the period of conflict known as "the Troubles" between 1969 and 1997,  but has now sustained a period of calm, free from the fierce political violence of former years, in hand with significant economic and commercial growth. The city centre has also undergone considerable expansion and regeneration in recent years, most notably the Victoria Square shopping centre, which opened in March 2008. 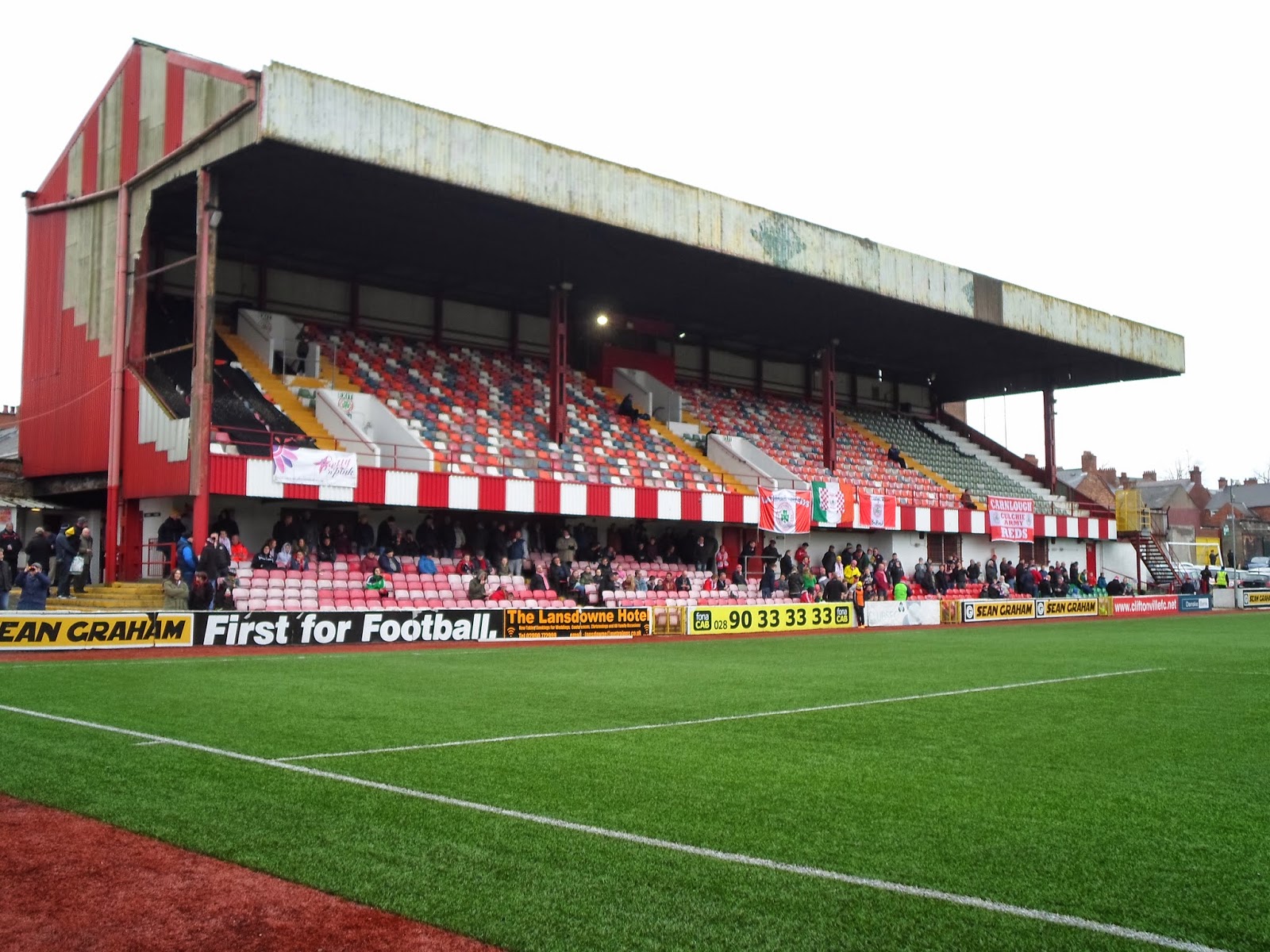 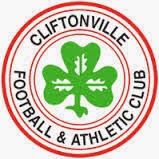 Plantpot History
Cliftonville Football & Athletic Club are the oldest club in Ireland, founded on the 20th September 1879 by a successful young Belfast businessman named John McCredy McAlery. He placed an advertisement in the Belfast News-Letter and Northern Whig asking people to sign up with "Cliftonville Association Football Club" after falling in love with football while watching matches on his honeymoon in Scotland the previous year. (what a guy!) The advert was a success, as they played their first recorded game just one week later on the third ground of Cliftonville Cricket Club, losing 2-1 against a selection of rugby players known as Quidnunces
John McAlery influence in Irish football saw the formation of the Irish Football Association. The first meeting took place on the 18th November 1880 at Queen's Hotel, Belfast, presided by John Sinclair, with Major Chichester being appointed president and McAlery becoming the honorary secretary of the association. This meeting also paved the way for new clubs and the Irish Cup. The club lost the first two finals in 1881 and 1882 but lifted the cup at the third time of asking with a 5-0 win over Ulster. They went on the win the cup a further six times in the late 19th/early 20th centuries, but had  to wait 70 years until lifting the trophy again, with a 3-2 win over Portadown in 1979.
The Reds are the current Northern Ireland Premier League champions, winning the title for a fifth time and a second consecutive year, following on from earlier successes in 1905–06 (shared with Distillery), 1909–10 and 1997–98. Cliftonville were an all-amateur club until the early 1970s and played a minor role in turning the game to professional status in Northern Ireland. 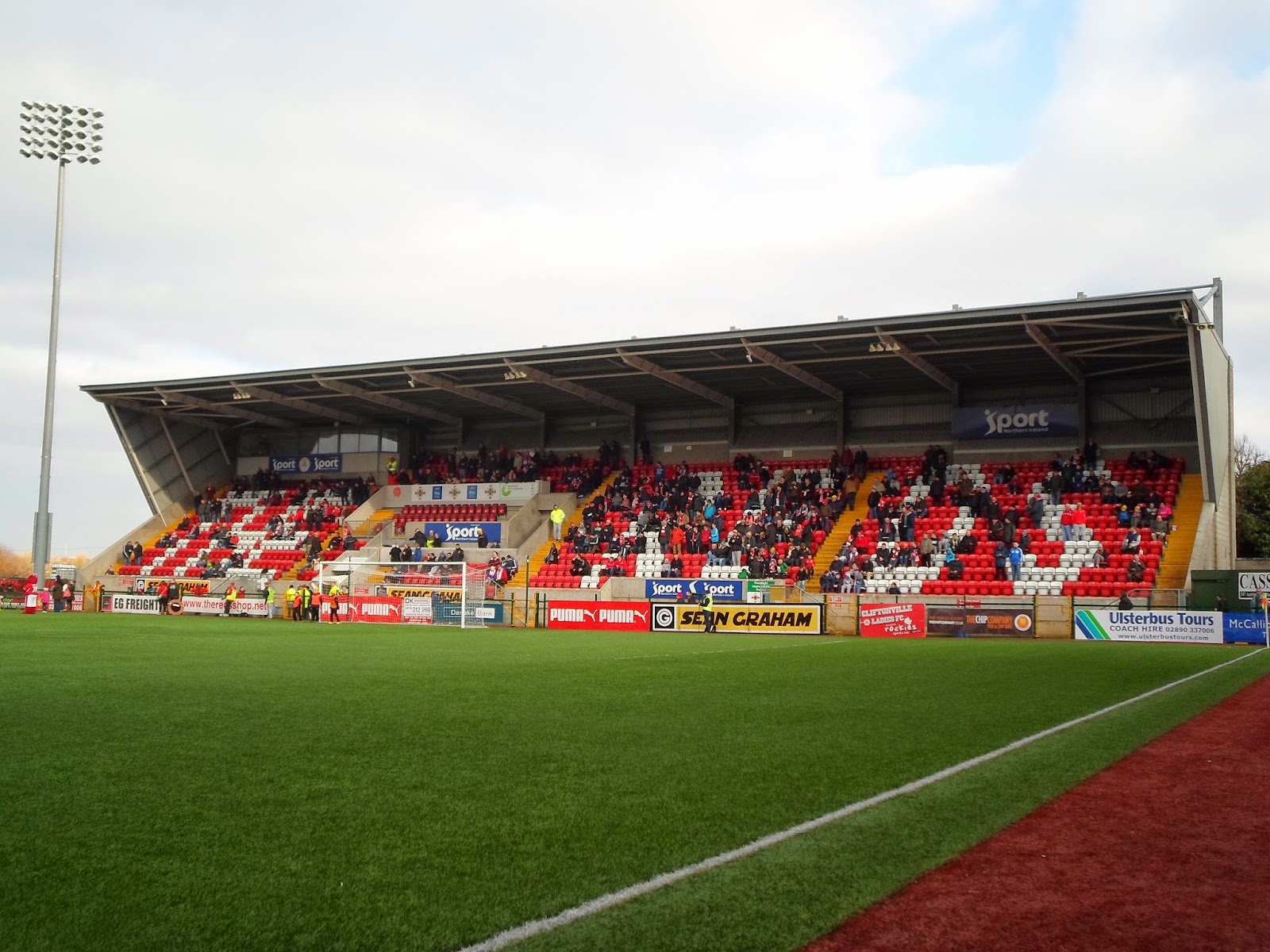 Ground no.439 Solitude
Opened in 1890, Solitude is the oldest football ground in Ireland. The venue has hosted a number of cup finals and international games, having the kudos of the first ever penalty awarded in an international fixture. Solitude replaced the Ulster Cricket Ground at Ballynafeigh to become the home ground of Ireland, hosting 11 home internationals, before gradually being replaced  by Windsor Park and Dalymount Park.
Another first for the ground was the use of floodlights in 1891. Cliftonville played two matches under lights against Distilery (lost 4-2) and Black Watch (2-2 draw) becoming the first Irish football club to use floodlights, with both games kicking off at 8pm. The lights were later dismantled with the announcement that spectators found it difficult to follow the action and that "the player seemed to have all the fun in the middle". This bold experiment wasn’t a success, as the general public seemed convinced that football under lights would never catch on.

The main stand was constructed during the 1950s, replacing the original structure which was destroyed when a fire broke out after a Linfield v Glentoran Irish Cup tie in January 1949. The classic looking stand has two tiers of seats, with only the bottom section open to the public. Overall the stand has a capacity of 2,500 and has the Cliftonville Social Club underneath.
On the opposite side is the team dugouts, but this end is barren apart from a small disabled section and a free standing electric scoreboard in the corner.
The Cage End terrace was replaced with a new 1,600 capacity seated stand in 2008. The stand is decked out in red seats with THE REDS picked out in white, with the main facilities such as changing rooms, directors box and press area are now housed behind the goal. The Red Shop portakabin is found at the side of the stand.
The away end is behind the opposite goal. The Bowling Green End is now a 880 single tier seated stand, having replaced the old covered terrace in 2001. Another feature of Solitude, situated in the corner between the two main stands is the Whitehouse. This is similar to the Cottage at Fulham, but the old changing room building is closed but hopefully will be revived sometime in the future. There is four traditional corner floodlights and Soiltude now sports a 3G surface. 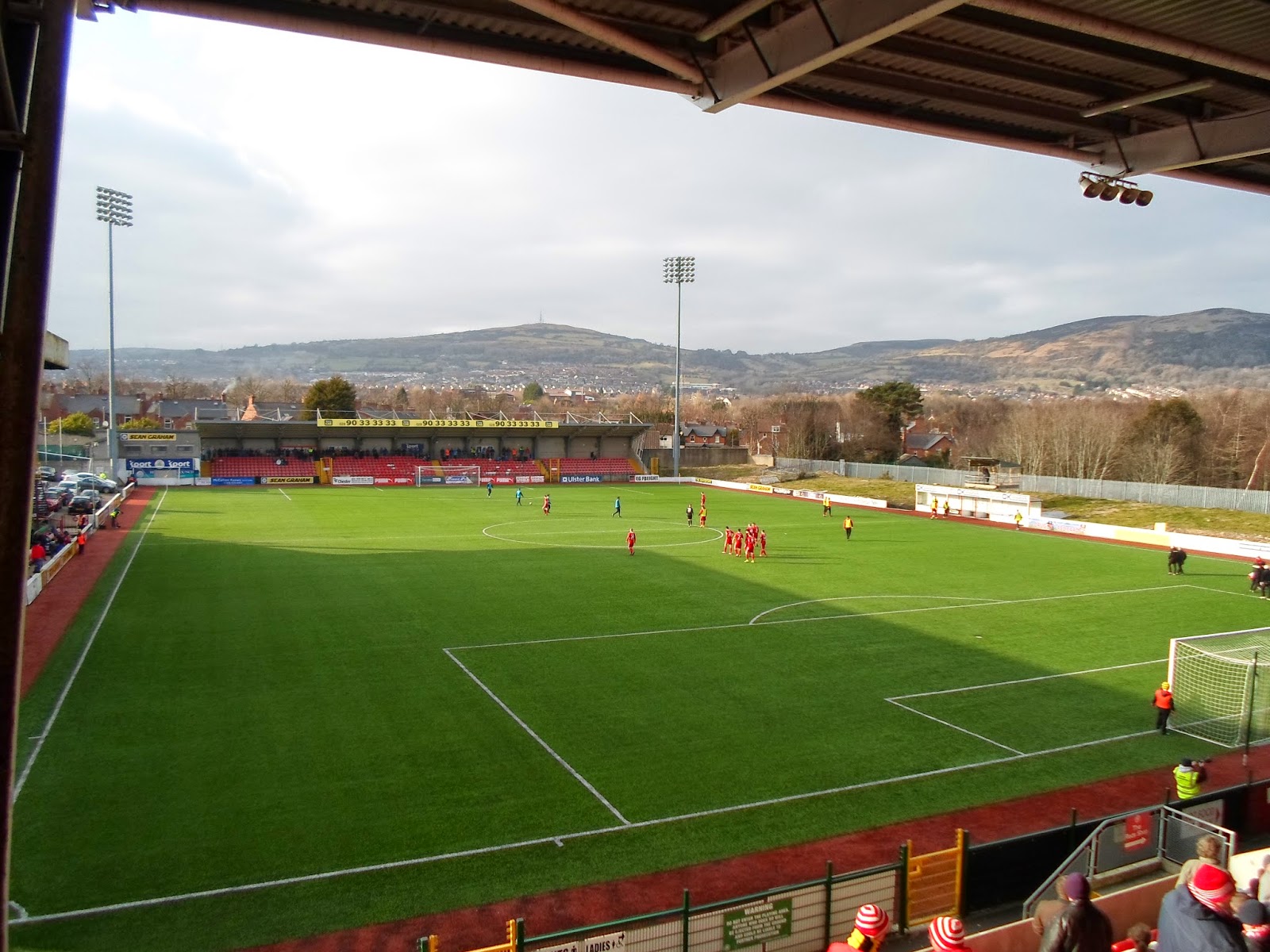 The Match
My introduction to the Northern Ireland Premier League wasn’t great, as the first half an hour of this match against Glenavon, was as dull as the old lightbulb I've got hanging up in the loft.
The match finally produced a goal courtesy of a penalty kick from Kevin Braniff after 33 minutes, after a handball offence against James Knowles. The award looked a bit harsh with the home fans showing their disapproval with the bloke behind me setting a new record for the number of times he said "You're a fooking eejitt ref!" in the space of a minute.
The second half was a complete opposite to the first, turning out to be cracking entertainment. The Reds had the chance to draw level when another penalty was awarded for handball, but James McGrath made a great save to deny Joe Gormley from the spot. The visitors punished that missed opportunity by increased the lead just before the hour mark when Eoin Bradley nipped in ahead of his marker to side foot home, before extending their lead six minutes later, when Braniff finished off a fine passing move to fire in from ten yards.
On 79 minutes the home side pulled one back through Martin Donnelly with a delightful chip from the edge of the box, then minutes later Knowles was on hand to volley in a Tomas Cosgrove cross. The Reds battled away in search of an equaliser but the golden opportunity didn’t arrive and the Lurgan Blues hung on to claim the three points. 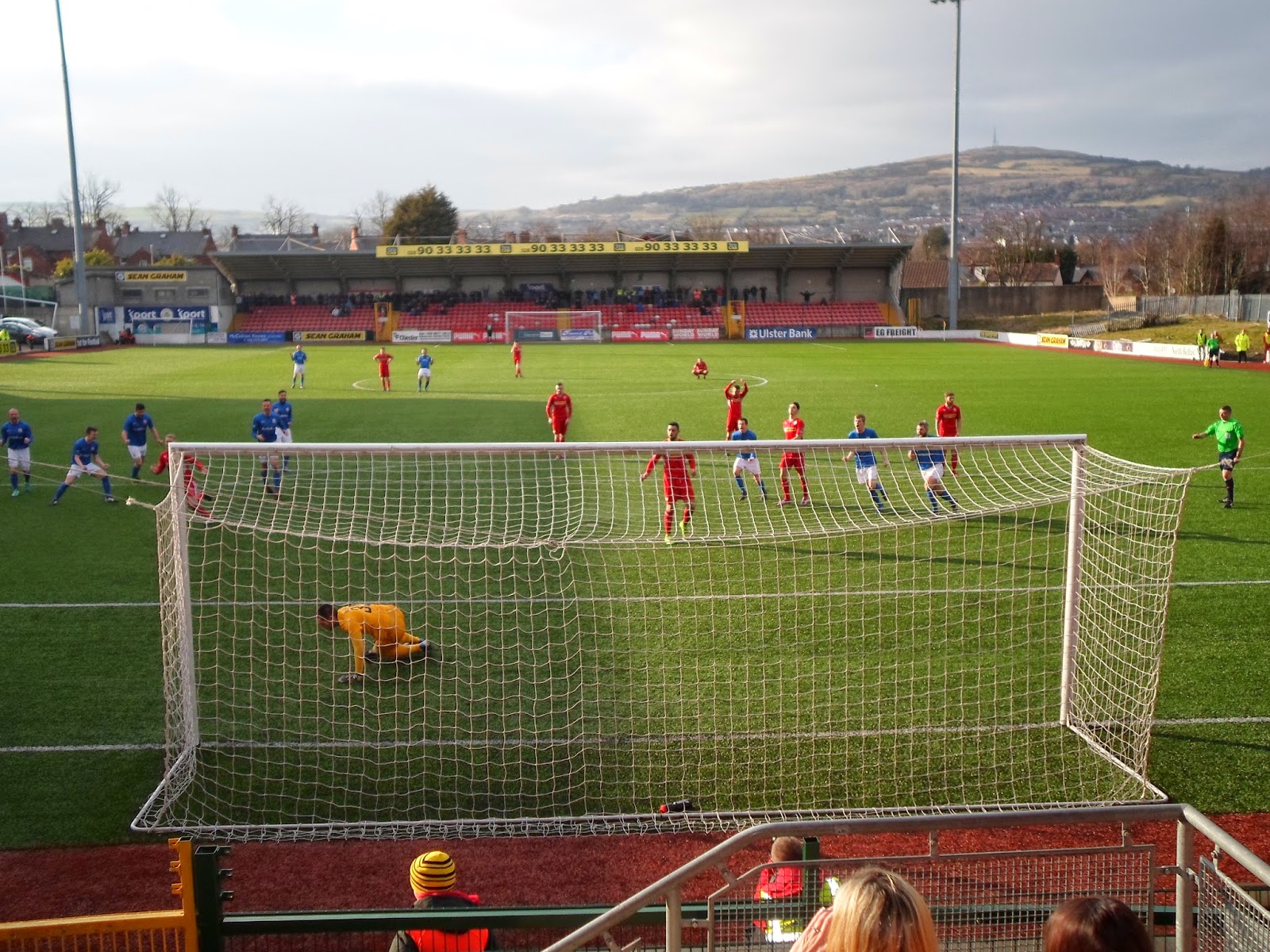 My Matchday
Our first visit to Belfast saw me and the breadknife having our Wetherspoons breakfast at 9am, after a short 35 minute flight followed by a half hour bus transfer to the city centre. After exploring the city and booking into our hotel, we took the 12A bus service from outside the City Hall up to Cliftonville. We enjoyed the match and had a good night out in Belfast. There are a few decent pubs, but unfortunately they are few and far between, so there was plenty of walking in between the boozers. Nevertheless, come midnight I was still half popped and ready for a kebab compass back to our hotel.
There are some cracking grounds in Belfast, so this visit won't be a one off, so hopefully a return to Ulster will be on the cards sometime in the not too distant future. 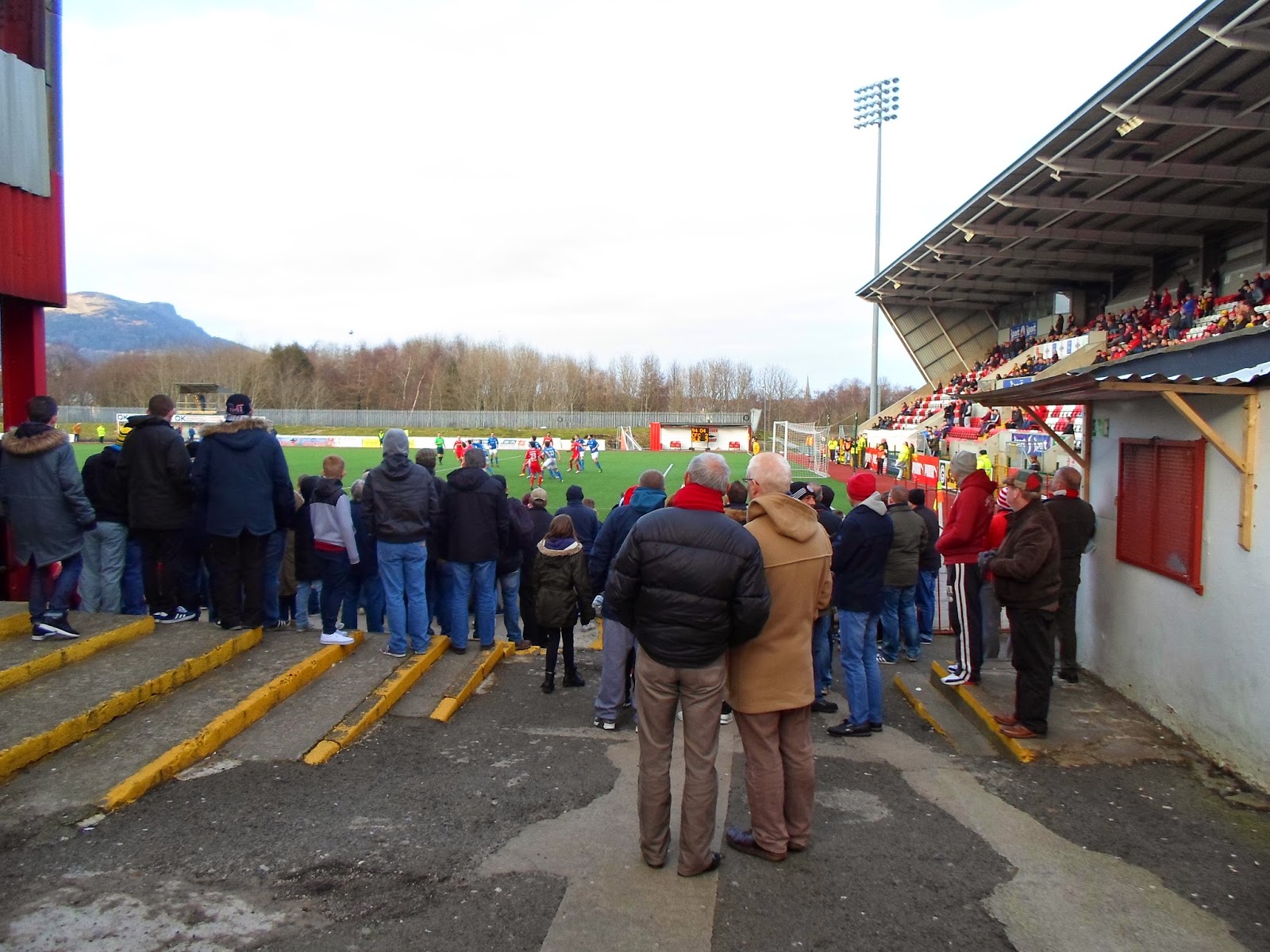 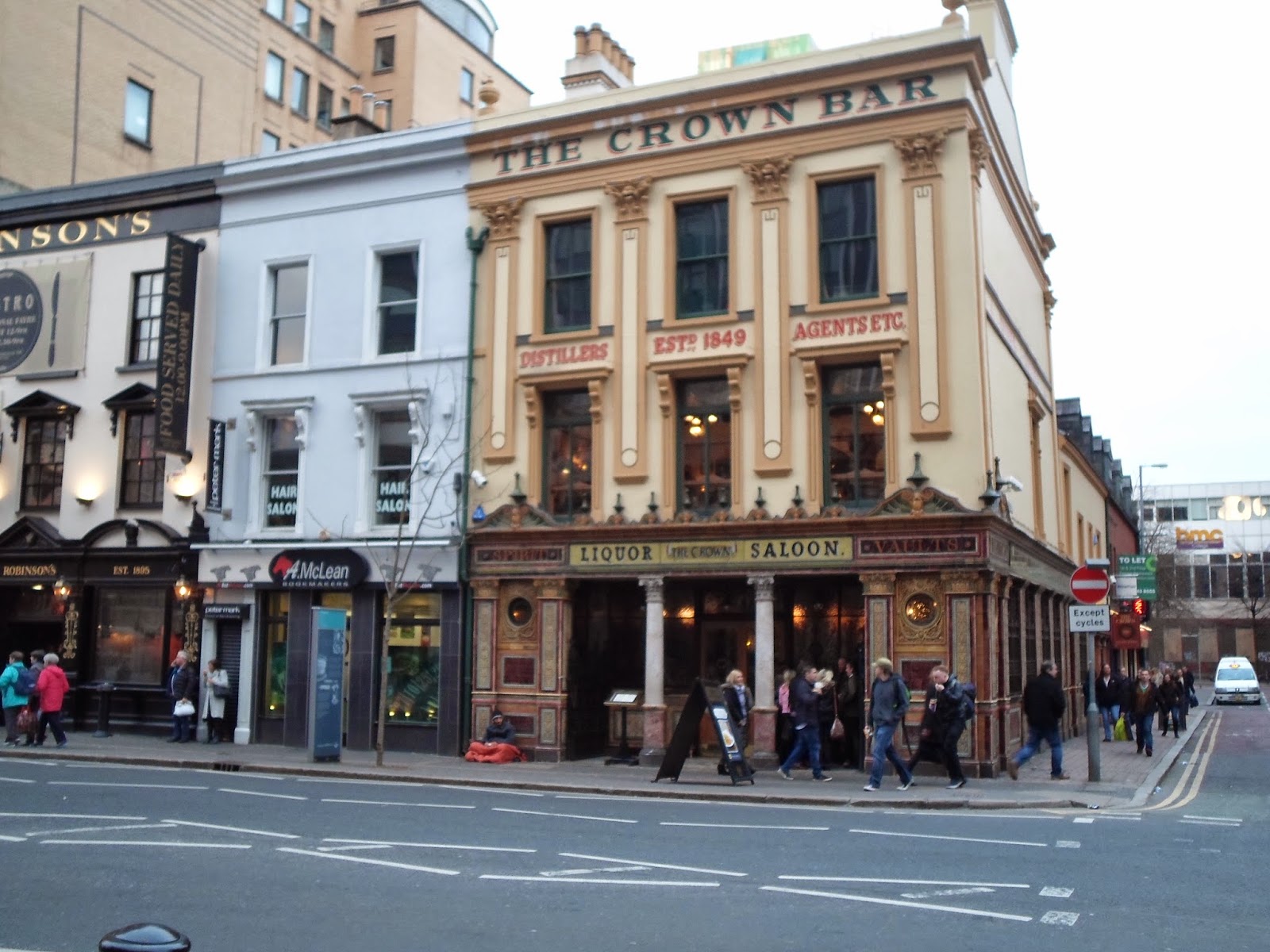 on March 15, 2015
Email ThisBlogThis!Share to TwitterShare to FacebookShare to Pinterest
Labels: Cliftonville, Glenavon