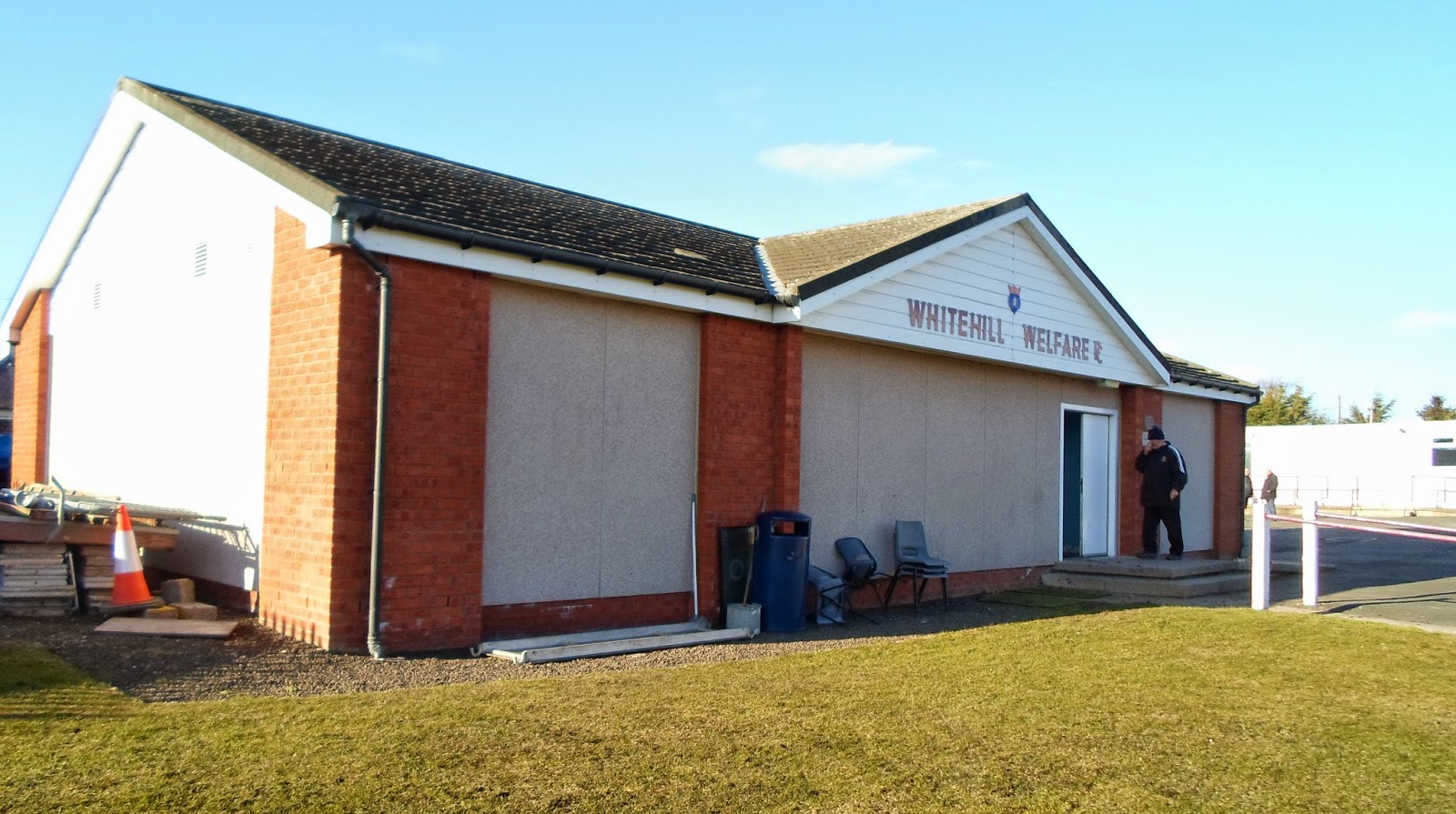 Another day in Scotland when I ended up at a different destination from my original plan. The good weather forecast meant I hadn’t prepared for a postponement, so there wasn’t a plan B, C or D. It was left to one of my old 100 grounds club muckers to come to my rescue, so instead of the Juniors it was the Seniors with Lowlands League action at Whitehill Welfare. 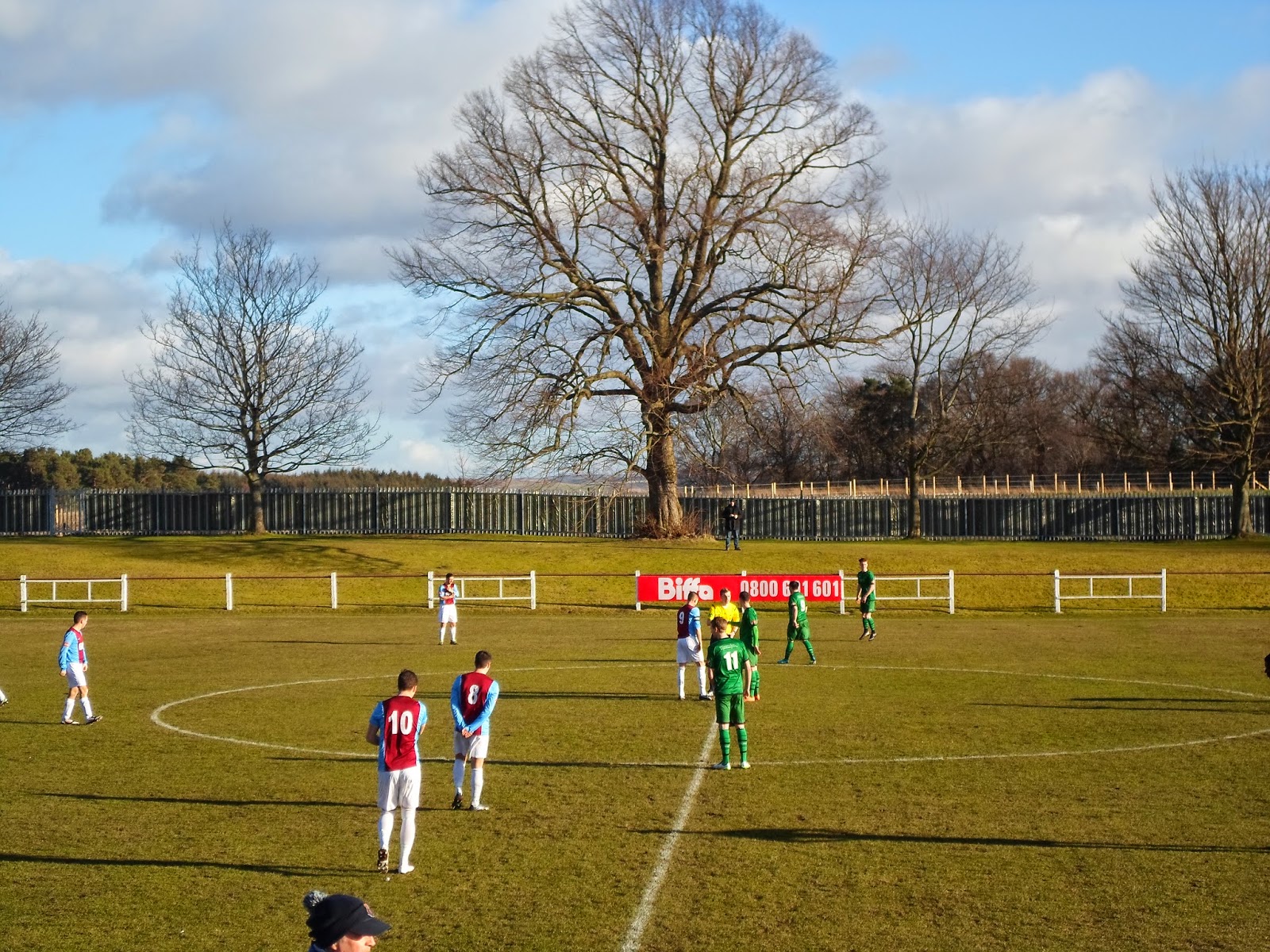 Wherabouts and Whatsabouts
Whitehill Welfare play in the former mining village of Rosewell in Midlothian. The village is situated south of Polton, south-west of Bonnyrigg and 10 miles south of Edinburgh city centre. As its just a small village with its history derived from the colliery I'll leave it to Frances Groome from the Ordnance Gazetteer of Scotland in 1882-84 to describe Rosewell: 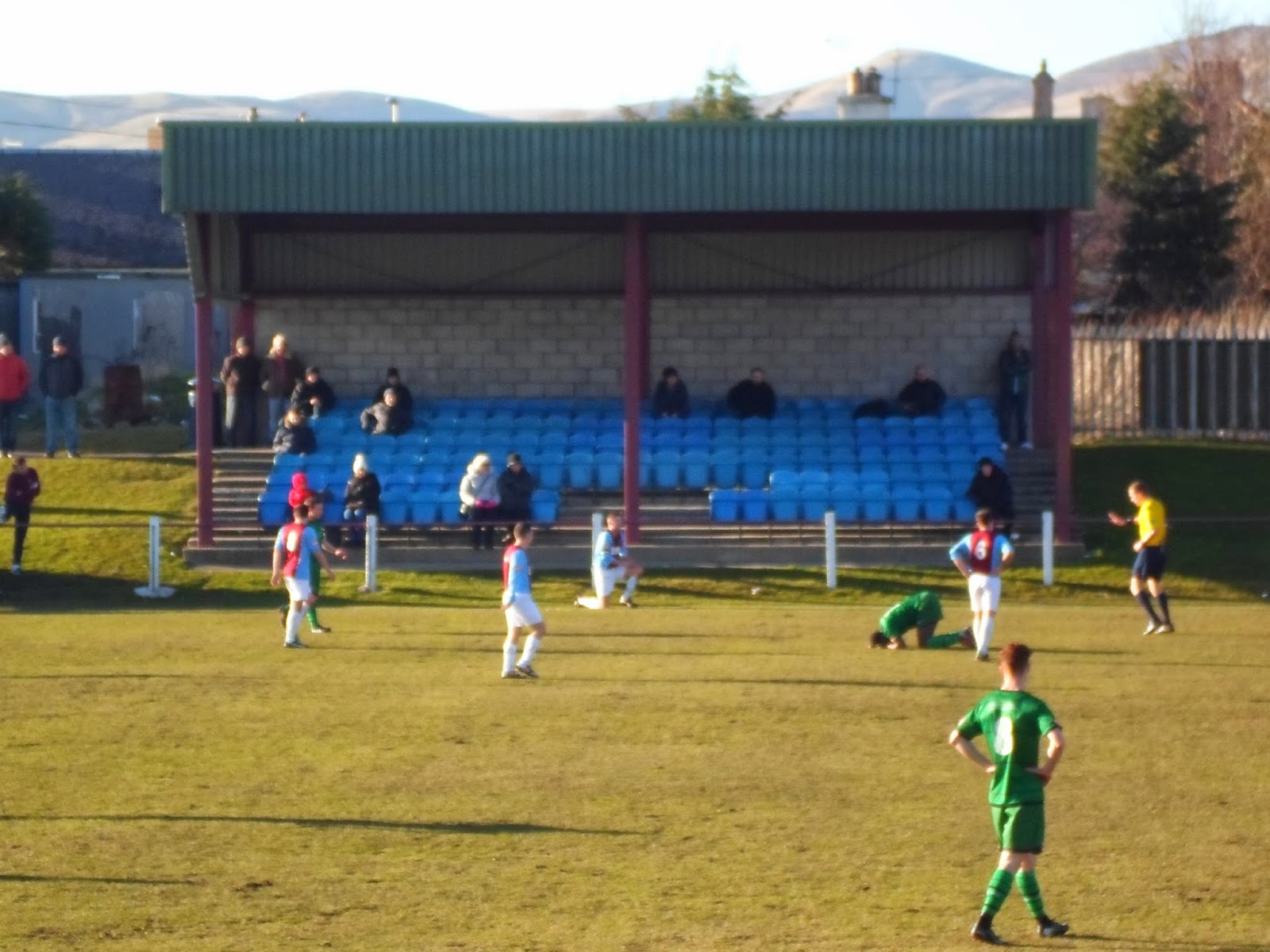 Plantpot History
Whitehill Welfare F.C. were founded in 1953, although earliest records indicate that a team first appeared in the village at the beginning of the twentieth century in the form of Rosedale Rovers, then Rosewell Rosedale playing in the Midlothian Juvenile League. The club was formed by a group of employees from the Whitehill Colliery who came to the fore in the mid 1960s, when they won every trophy in the Mid and East Lothian Section Juvenile League. 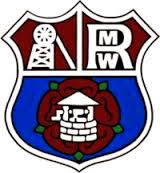 In 1979 they decided to step up to the senior ranks and joined the East of Scotland League. They were league champions in their first four seasons and won a total of 16 titles prior to joining the Lowland Football League for the 2013-14 season, making them the most successful club in the competition.
The Welfare have also won a shed load of cup honours, most notably the East of Scotland League Cup 13 times, plus the Scottish Qualifying Cup(11) East of Scotland Qualifying Cup (10) and have also lifted the City Cup and triumphed in the Kings Cup on six occasions. 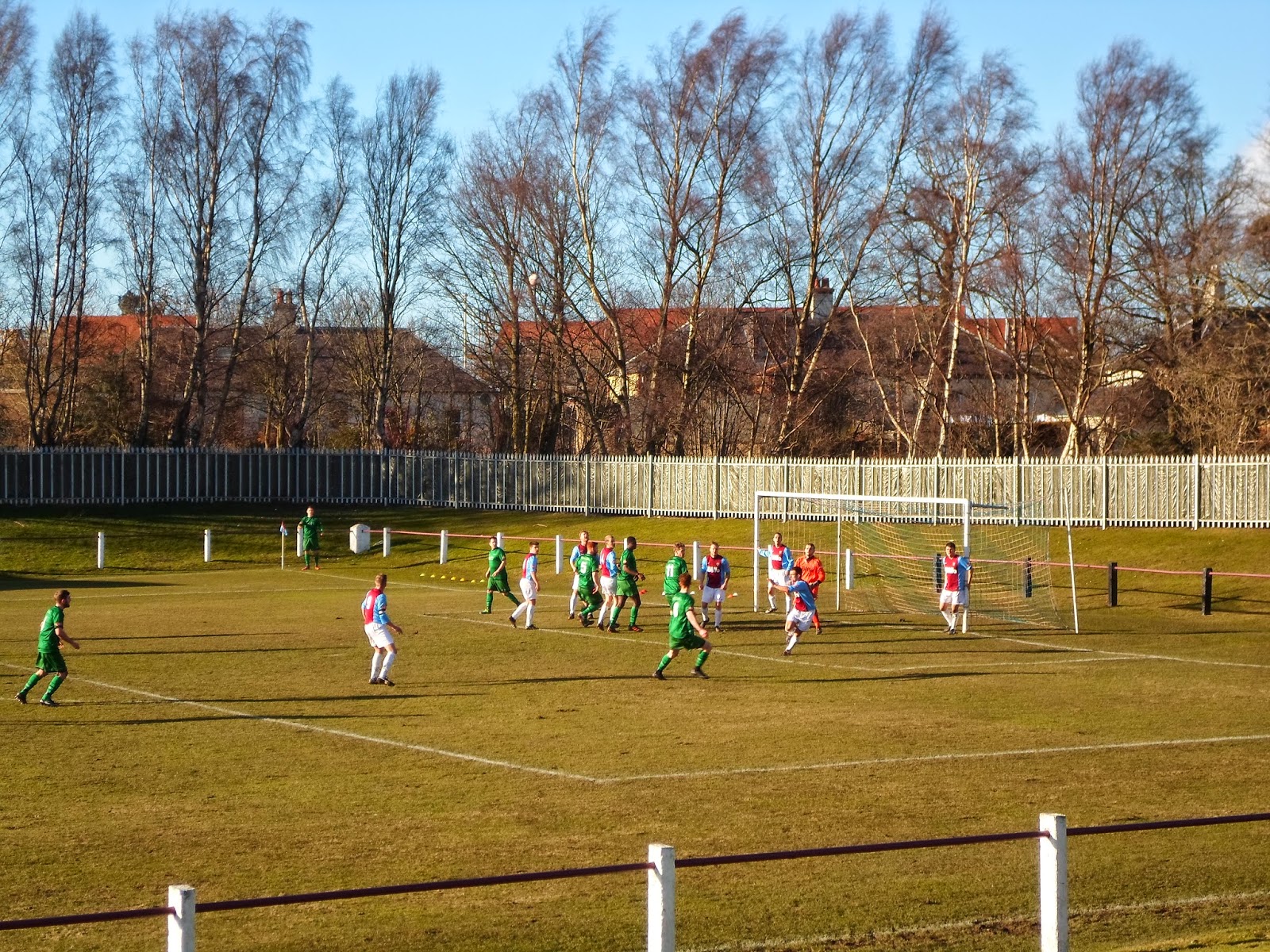 Football in Rosewell was played on various pitches within the village until after the Second World War, when the National Coal Board leased the club a stretch of land behind Carnethie Street. The landowner of Stonefield House, Mr J. Ferguson allowed the club to cut turf from his farm, as long as they transported it the three miles to their new home, so as thanks to this gesture the ground was named Ferguson Park.
The 4,000 capacity ground is quite homely and very neat, having been vastly improved in preparation for their move into the Lowlands League in 2013. The standing enclosure has been filled with about 130 blue flip seats, bolted onto the terrace, with a new perimeter fence separating the pitch from the three sides of grass banking. Apart from the stand, the entrance side has a terraced section with the team dugouts in between. The clubhouse, snack bar and the changing room pavilion which was opened in July 1999 is also at the entrance side of the ground. There is also a row of 20 seats with a disabled shelter at the top of the grass bank in the south-west corner. 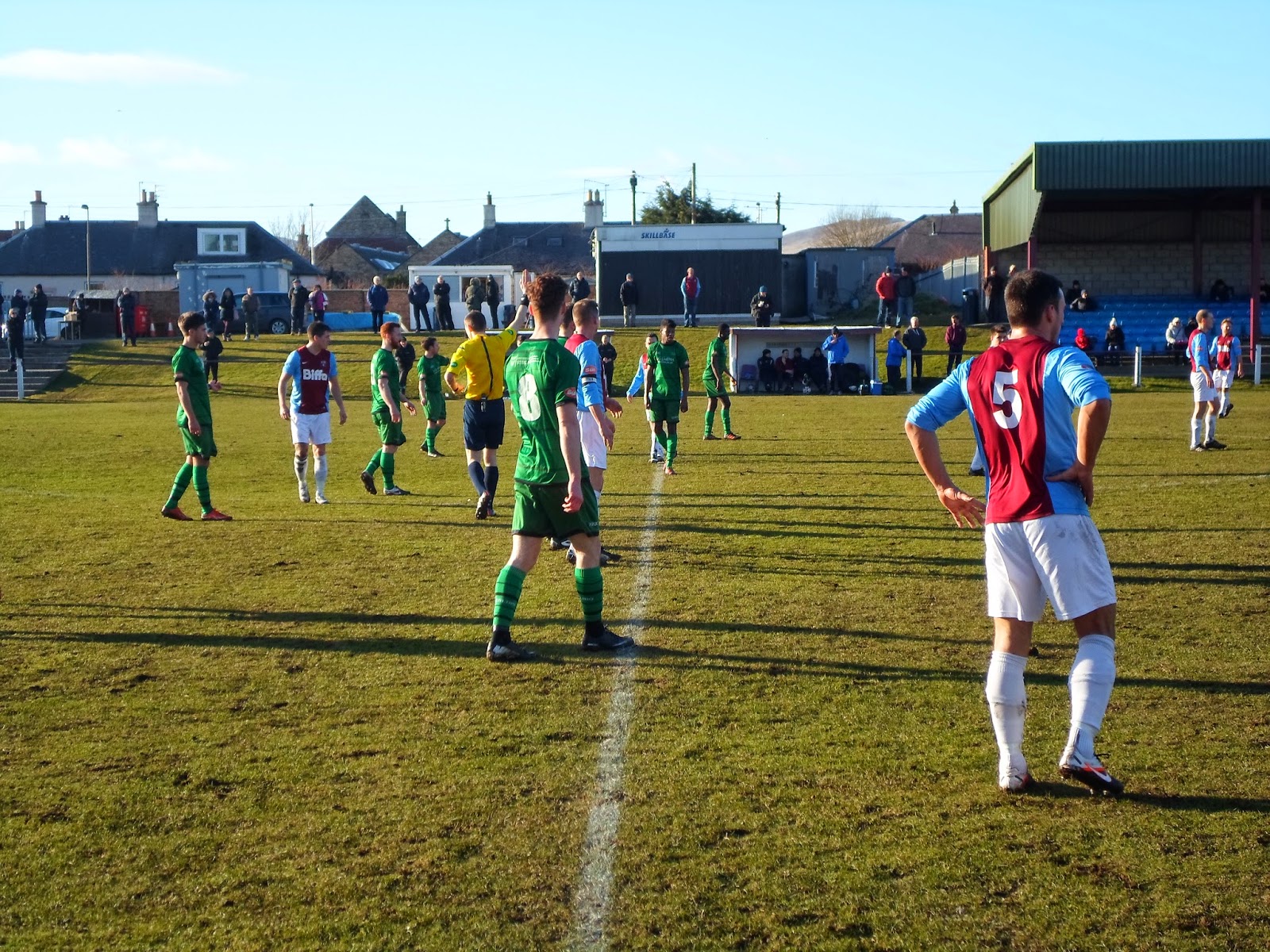 The Match
Whitehill left the home supporters angry and frustrated after a poor display against Stirling University. The visitors took an early lead when a half hearted backpass was intercepted by Chris Geddes who took the ball around the keeper to fire in off the far post. The hosts looked out of sorts and didn't muster any clear chances while Stirling could have added to their tally in a lacklustre first half.
The Welfare got themselves on level terms but were a touch fortunate, when the linesman flagged for a penalty after a soft challenge on Wayne McIntosh. Aaron Somerville fired home the resulting spot kick, and with half an hour remaining it looked like to game could turn on its head.
If that penalty award looked a bit harsh then it was nothing compared to the decision which gave Stirling all three points. A fierce shot from the edge of the box struck Ryan McKenzie as he lifted his arm to protect his face. The referee deemed it as a handball and to make matters worse the offending player was sent off for a second yellow card. Geddes made no mistake with the penalty which proved to be a well deserved winner for the students, who are managed by former Arsenal Ladies manager Shelley Kerr, the first female coach in British senior men’s football. 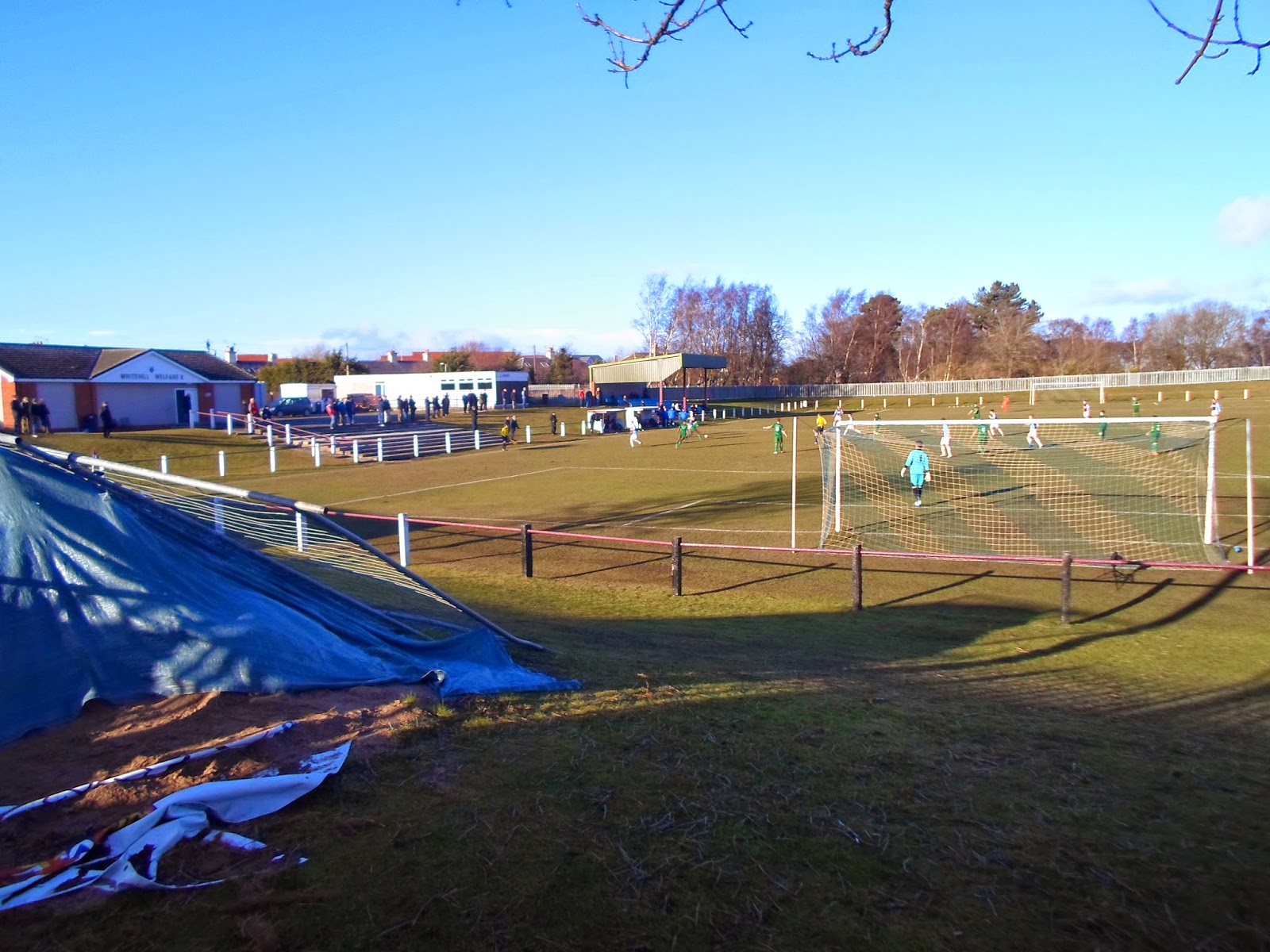 My Matchday
I didn’t find out until 11.15 that my intended game at Hill of Beath Hawthorn was postponed. I had arrived in Edinburgh two hours earlier, so after a big breakfast and some record store shopping I was ready for a pint. I called into The Playfair, logging onto their WiFi to find a few twitter messages letting me know the match was off. After checking through the remaining fixtures, it was disappointing to find the clubs I’m visiting for my book project were either playing away or their match was also postponed. I was alerted to the fact that Whitehill Welfare had a home fixture, so I gave club committee member and programme editor Jamie McQueen a call, knowing he would he going to the game as his beloved Liverpool FC weren’t playing until Sunday.
I arranged for Jamie, along with Jamie Jnr. to pick me up at 1.30, which was followed by a sightseeing tour of the back streets of Edinburgh to pick up the match programmes and a Whitehill and Celtic fan called Cam, who told me a few happy tales of Celtic v Newcastle matches during the late ‘60s.
Although my day didn’t go as planned it worked it fine in the end, as I was glad to finally visit Whitehill Welfare after promising Jamie I would visit Ferguson Park this season, before realising I probably wouldn’t be able to make it due to my Scottish Juniors task. Everyone connected with the club were very hospitable which made for an enjoyable afternoon, although I must apologise as I’ve now seen Whitehill play twice and they’ve lost both times, so you can blame me for your teams poor performance on this sunny but chilly afternoon.
Foetoes (26 pictures from Ferguson Park)

Bevvy Almanac
After going through the majority of a bottle of Jack Daniels on Friday night I wasn't really in my usual drinking mood so it was just...
The Playfair (Omni Centre)
Broughton Sin Bin ale(4%)****
Caledonian Harpoon 'The Long Thaw' (5.5%)****
Guildford Arms (Werst Register St)
Sunny Republic 'Hop Day' (5.5%)****+

Hi Shaun, glad you enjoyed your visit to Midlothian, a county so good that Yorkshireman have stolen its nickname.
Sorry that The Welfare were shite, and also that you had to share a car journey with wee Cammy, the man who's still trapped in 1967.
Come back and see us, we're bound to be in a final later this season.
Cheers
JB
p.s. I did a count and apparently I've been to 179 grounds, that's not including school pitches like that charlatan McQueen.