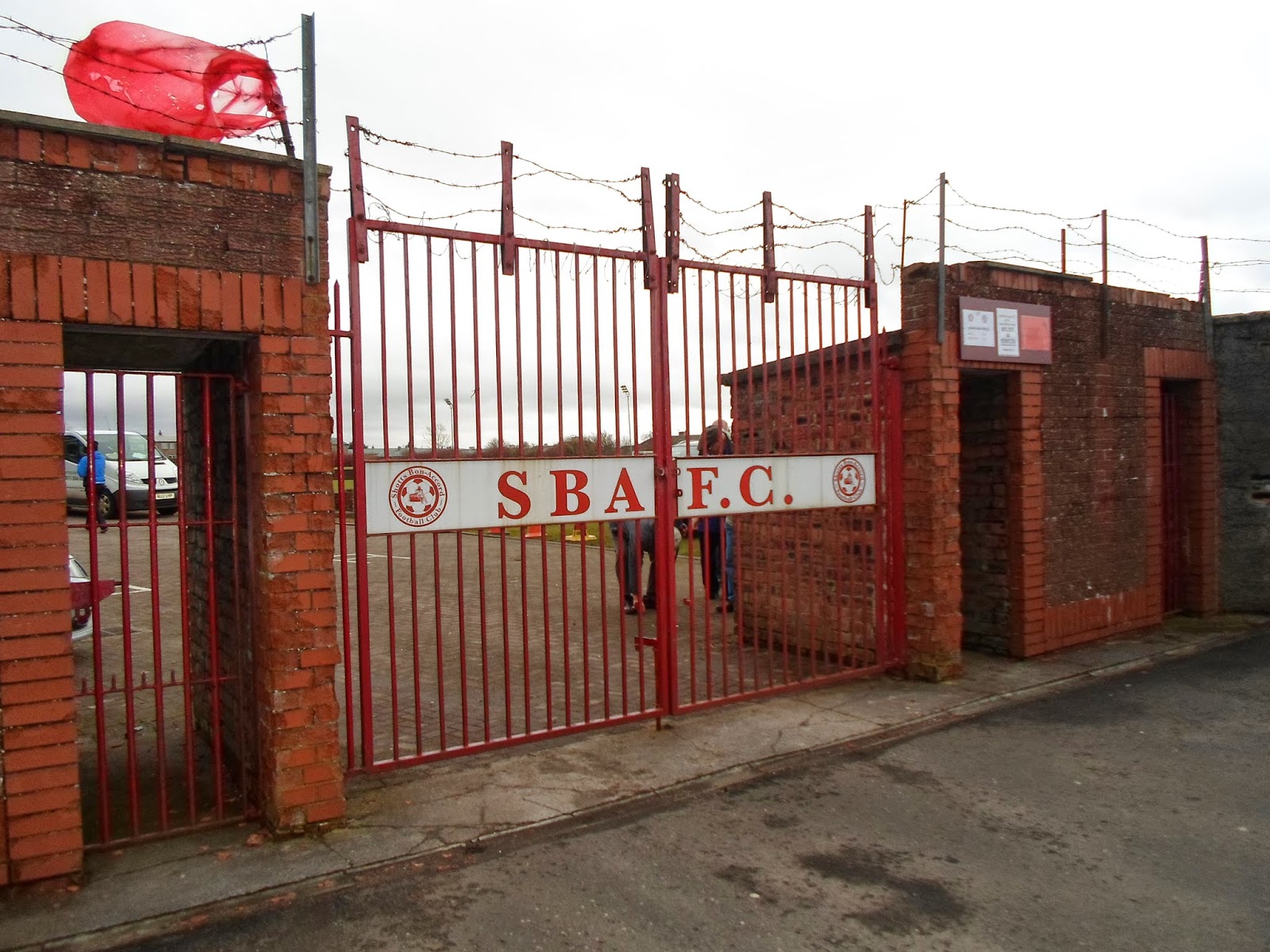 My two recent trips to Scotland have seen me end up at a different match to the one I initial intended. I fully expected my planned trip this week to again fall foul to the weather, so I was well prepared with a list of potential backups, however I needn’t have worried as the forecast of heavy rain held off until after the football so I could visit Hannah Park, the home of Shotts Bon Accord. 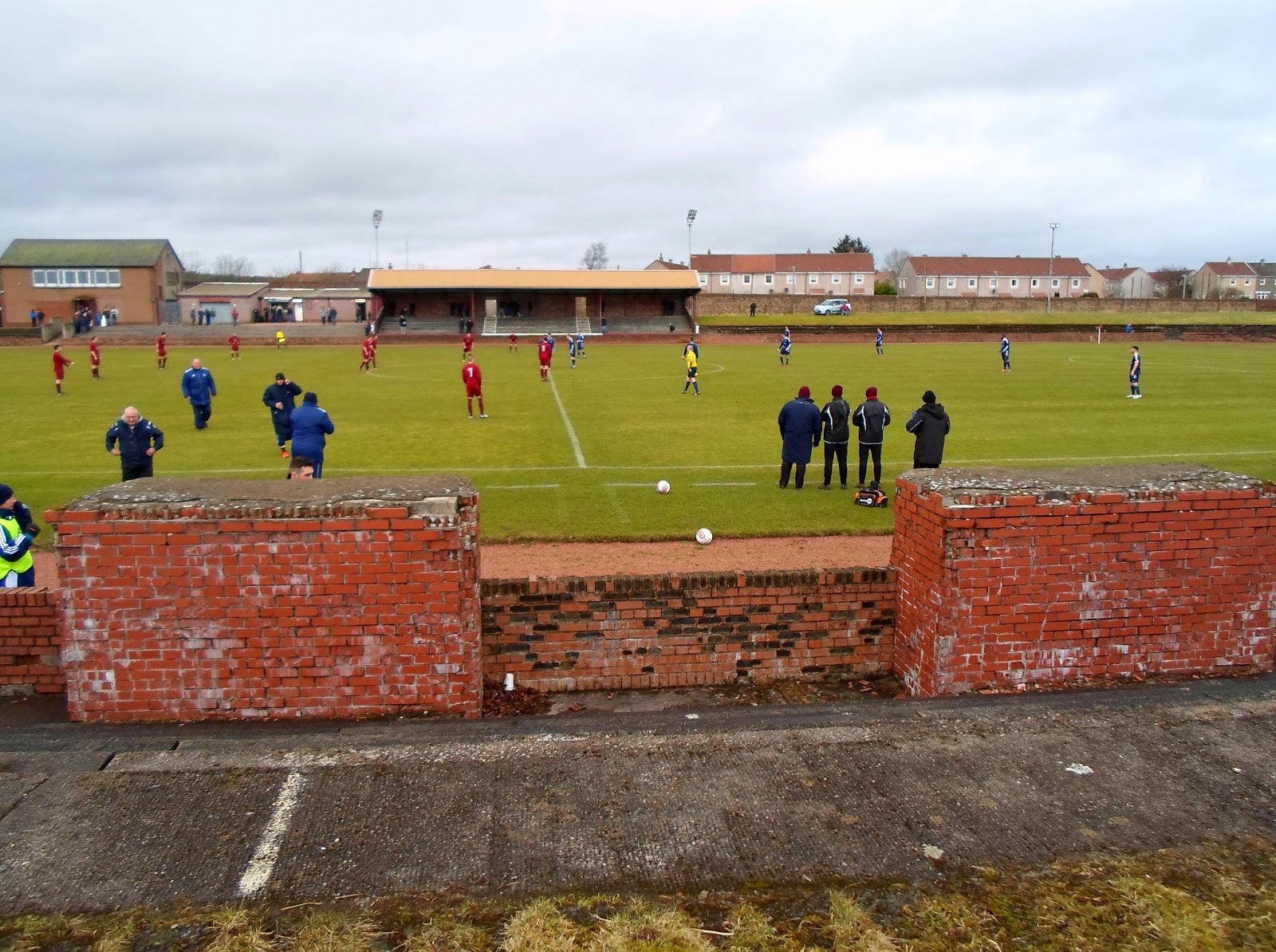 Whereabouts and Whatsabouts
Shotts is a small rural town in North Lanarkshire with a population of just over 8,000, located almost halfway between Glasgow and Edinburgh. Shotts was known for its mining and ironworks, having 22 coal mines prior to the Second World War, with Northfield Colliery being the last to close in the 1960s.
According to folklore Shotts was named after the legendary giant Bertram de Shotts who roamed the village in the 15th Century.  He notoriously mugged pack men and peddlers carrying their goods along the Great Road of the Shire, which prompted King James IV of Scotland to offer an award for his death.
Bertram’s life came to a barbaric ending in a gripping tale told by Willielmo, the 1st Laird of Muirhead who slayed the giant, ambushing and paralyzed him by slicing both his hamstrings as he lay down to drink at Kate's Well in Sallysburgh (now Salsburgh, 3 miles from Shotts)
He was then savagely decapitated with De Muirhead proudly carrying the blooded head to the King, claiming his reward of a 'Hawk's Flight' of land, which subsequently became Muirhead's Lauchope estate. Bertram de Shotts was only about seven or eight feet tall but his large presence merited giant status, and is believed to have lived roughly between 1467 to 1505.
Toponymics give the Anglo-Saxon derived 'sceots' (steep slopes) as the real origin of the name, but the legend of Bertram de Shotts is a much better source and a splendid tale in the history of this part of Lanarkshire. 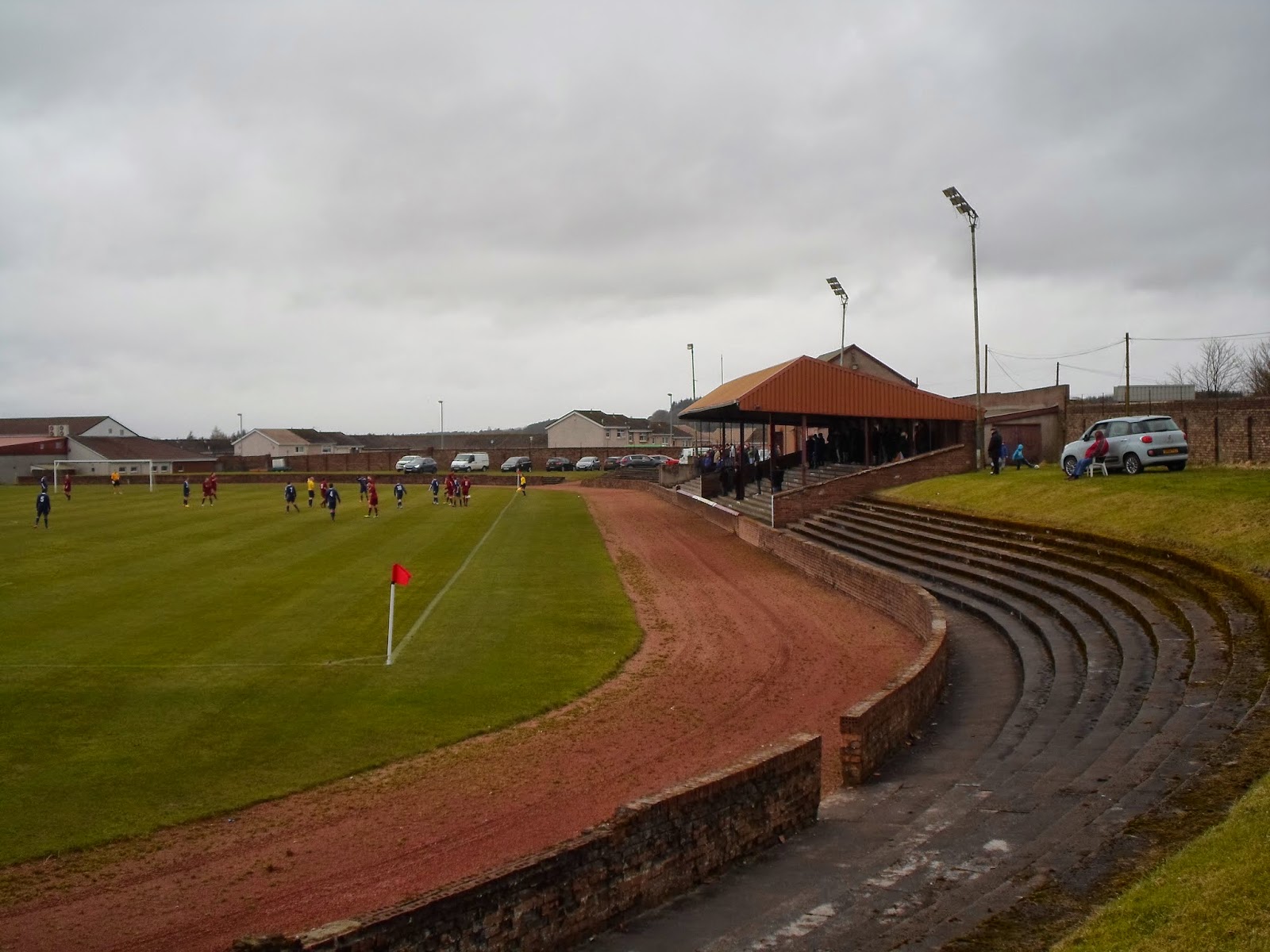 Plantpot History
Shotts Bon Accord FC were formed and began playing in the Lanarkshire League in 1950. The club were one of the most successful in the competition, winning the title for the first time in 1957-58, in the same season they won their first Scottish Junior Cup, beating Pumpherston 2-0 in front of a 33,000 crowd at Hampden Park. Six further league titles followed during the 1960s, and they also lifted the League Cup on seven occasions, until the flagging league saw the remnant clubs move into the Central League from the 1968-69 season. 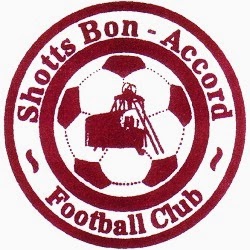 During their time in the Central League, The Bonny played within its three divisions, the majority of which in its Premier Division, until the club fell out with the game’s governing body and were suspended in 1995. The club returned to the league the following year and placed in its third tier, but under a new manager Rab Sneddon they won a hat-trick of championships in all three divisions, crowned Premier Division winners in 1998-99.
The amalgamation of the Ayrshire League and the Central League at the end of the 2001/02 season, saw Shotts enter the Superleague First Division for the following campaign. In 2004-05 they won promotion to the top division after finished runners-up to Kilsyth Rangers.
The long awaited second success in the Junior Cup finally came in 2012, beating warm favourites Auchinleck Talbot at Almondvale Stadium, with goals from Stefan McCluskey and John Boyack securing a 2-1 win.
P.S. Before anyone asks this fine club has got bugger all to do with the Bon Accord which lost 36-0 to Arbroath in 1885. 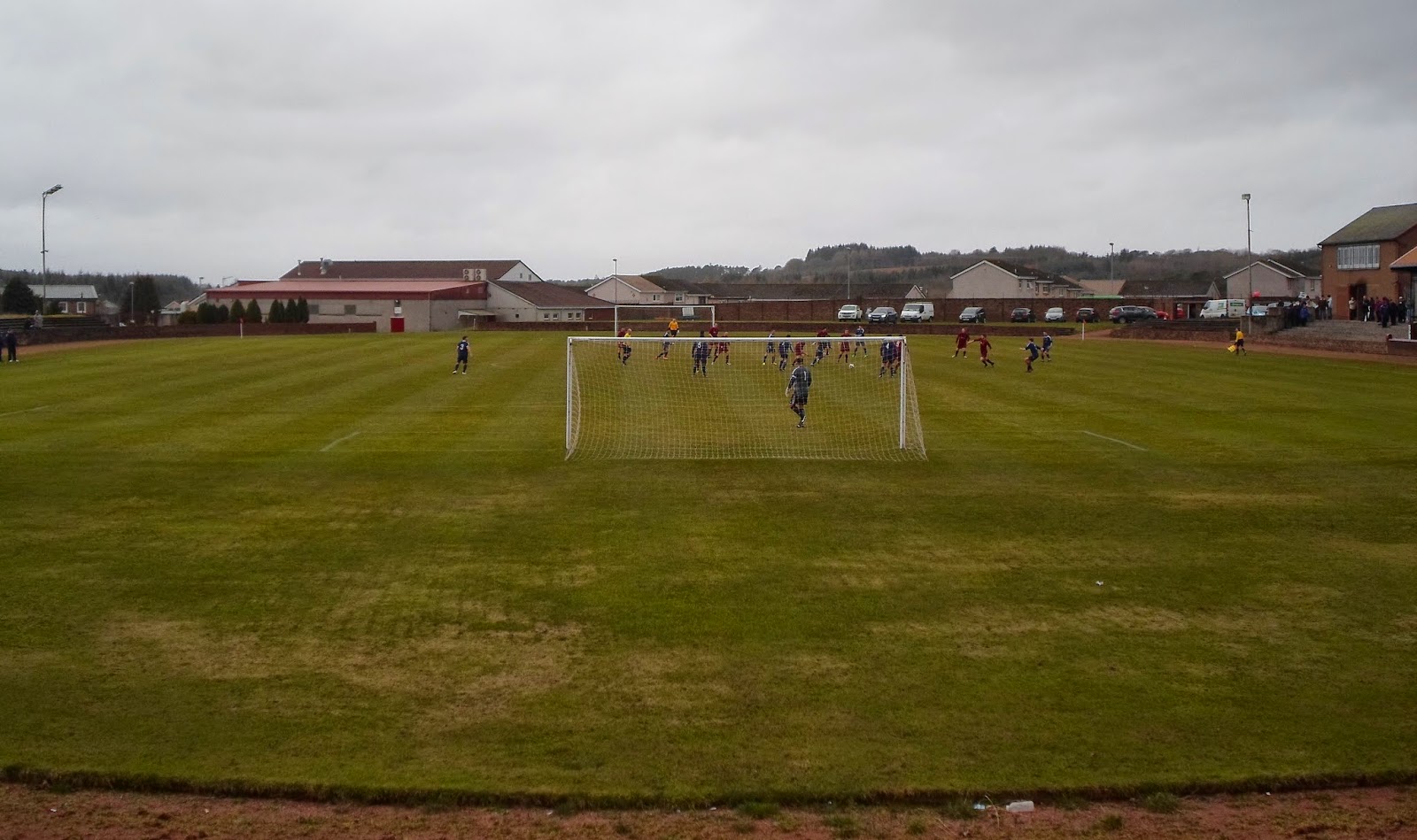 Hannah Park appears as a huge venue, having one the largest playing surfaces at this level surrounded by an oval track. There's a central standing enclosure on one side, with eight steps of terracing which snakes around the other three sides of the ground. The brick wall around the perimeter of the terraces forms the dugouts at the far side. There is also a larger terrace in front of the changing rooms/clubhouse building with the Bonny Bistro and toilets at the top. The changing facilities are downstairs with two rooms upstairs providing refreshment and bar facilities. There are four floodlight poles on each side, although these are rarely used nowadays.
The 4,000 capacity ground was build by the workforce of local volunteers and is named in honour of James Hannah, who died of thrombosis during their efforts to finish the ground. As well as being a football stadium, it’s also been used as the venue of the annual Shotts Highland Games. 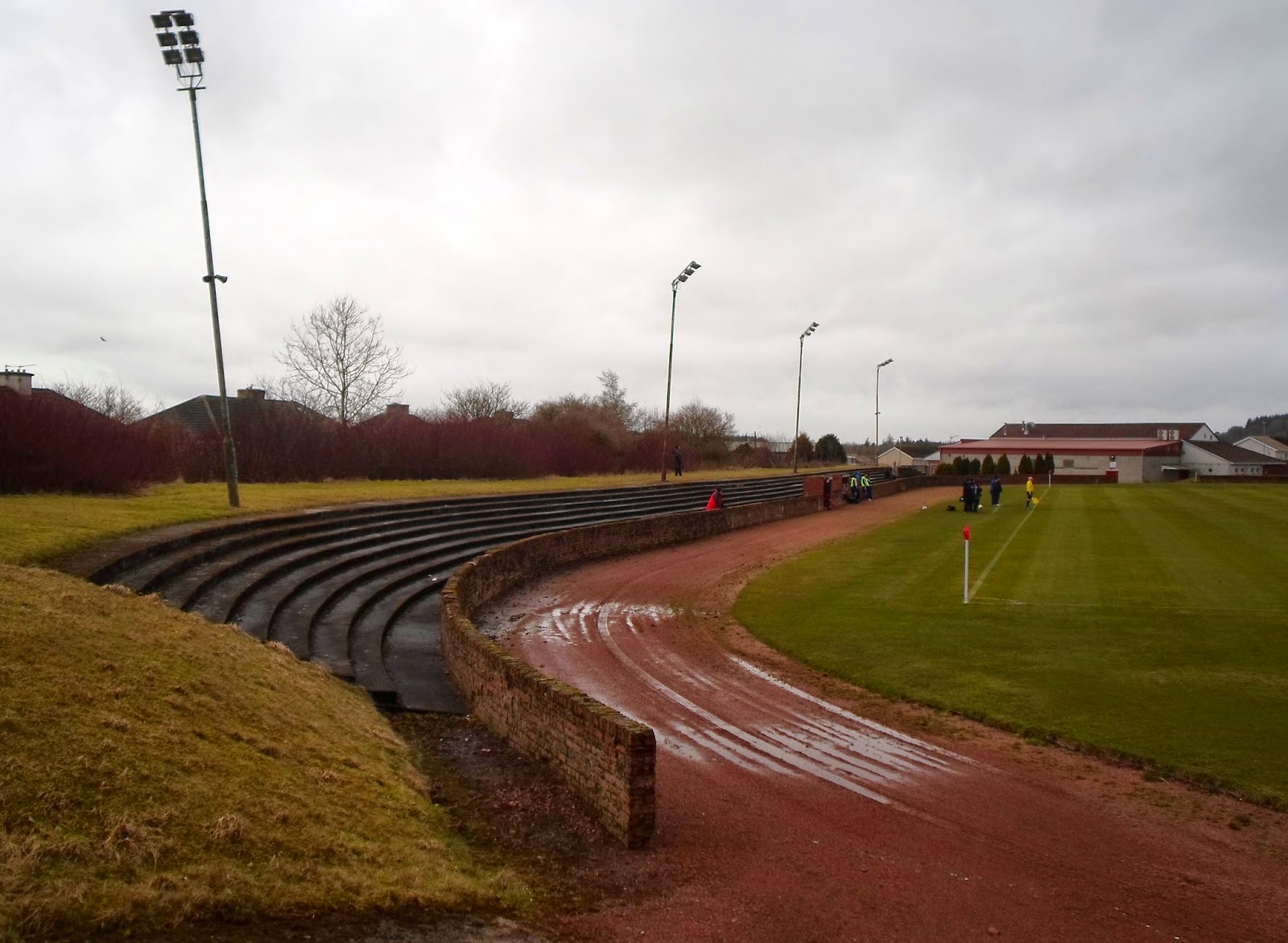 The Match
Prior to this game I fully expected Shotts to comfortably book their place in the next round of the West of Scotland Cup, however Vale of Clyde can count themselves unlucky not to have taking the tie to penalties.
They took the lead in the 27th minute when a cross from the right dropped onto the left foot of Higgins who hit a half volley out of the reach of Whyte, but unfortunately the visitors couldn't keep hold of their slim advantage and ten minutes later Bonny equalised with a quite bizarre goal. The ball found the back of the net at the third attempt, after the initial shot from Marriott hit the underside of the crossbar and bounced in front of Allan McCrum, his point blank effort well saved, but Jordan White was on hand to fire home the rebound.
The best chance of the second half saw a header from Chris Walker kicked off the line on 70 minutes which could have settled the tie, but just as it was looking like Vale had won a ticket for the spot kick lottery, a right wing corner in the final minute saw Jack Marriott fire in through a crowded penalty area to book their place in round three. 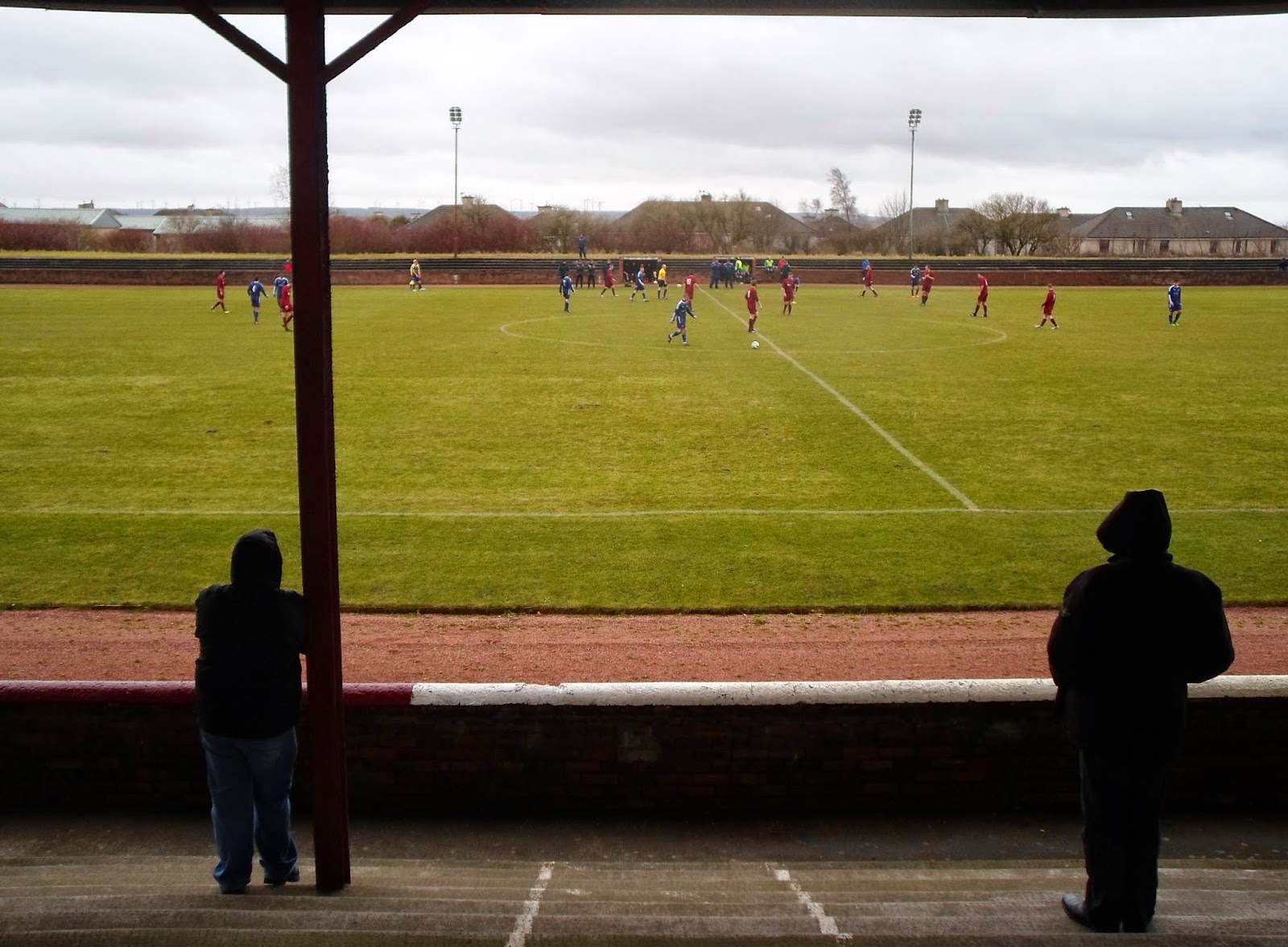 My Matchday
I  travelled up to Glasgow via Edinburgh, arriving mid morning, so allowing plenty of time to visit my favourite shopping outlets and of course have a few bevvies. Breakfast was partaking in the Camperdown Place ‘Spoons which still has black pudding on the menu, but my delight was dampened by the fact they don’t serve alcohol until 11am.
One of my favourite shops in Glasgow is ‘Missing’ which is an Aladdin's Cave for collectors like myself, having a huge range of CD’s, DVD’s, vinyl, football programmes and magazines, autographs, basically a shitload of great stuff! I picked up a couple of CD’s for only two quid a piece(old albums by Stephen Malkmus and Flaming Lips) and headed off for a few pints. I’ll be back in Glasgow with a few of my mates in four weeks time, so I surveyed a couple of boozers for our return before catching the train to Shotts at 1pm.
Before heading to the train station I rang the club secretary just to confirm the match was definitely on and arrived at Hannah Park ten minutes before kick-off. On arrival I was greeted by Alec Hendry who apologised for not asking who I was when taking the earlier call, and invited me upstairs in the clubhouse for a cup of tea and a chat at half time. Everyone was very hospitable and recognized my presence, even when I bought a pie and a pin badge at the Bonny Bisto I was giving me a couple of old programmes, which included both the Shotts recent Junior Cup semi-finals.
After the game I thanked Alec for a great afternoon and headed next door to the Shotts Bon Accord Social Club. Just as was leaving I was approached by a member of the football club hierarchy who apologised for not getting the chance to speak to me earlier, wishing me well and I promised to send him a copy of my book … if it gets published.
So overall an ace day and I don’t have too long to wait until my next venture into the West Region, with the next ground in the series at the end of March, which will round off a busy month of football and new grounds to bag.

Foetoes(link for Matchday album of 27 pictures from Hannah Park)

Footnote
All going well I’m in the process of writing a book on the winners of the Junior Cup over the last 50 years, so I’ll be writing a more thorough piece on my matchday at Shotts, including the whitest footballer I've ever seen and what the 28th of February really means to me.
You can check the progress and a map of the grounds on my list on the T’Do Page 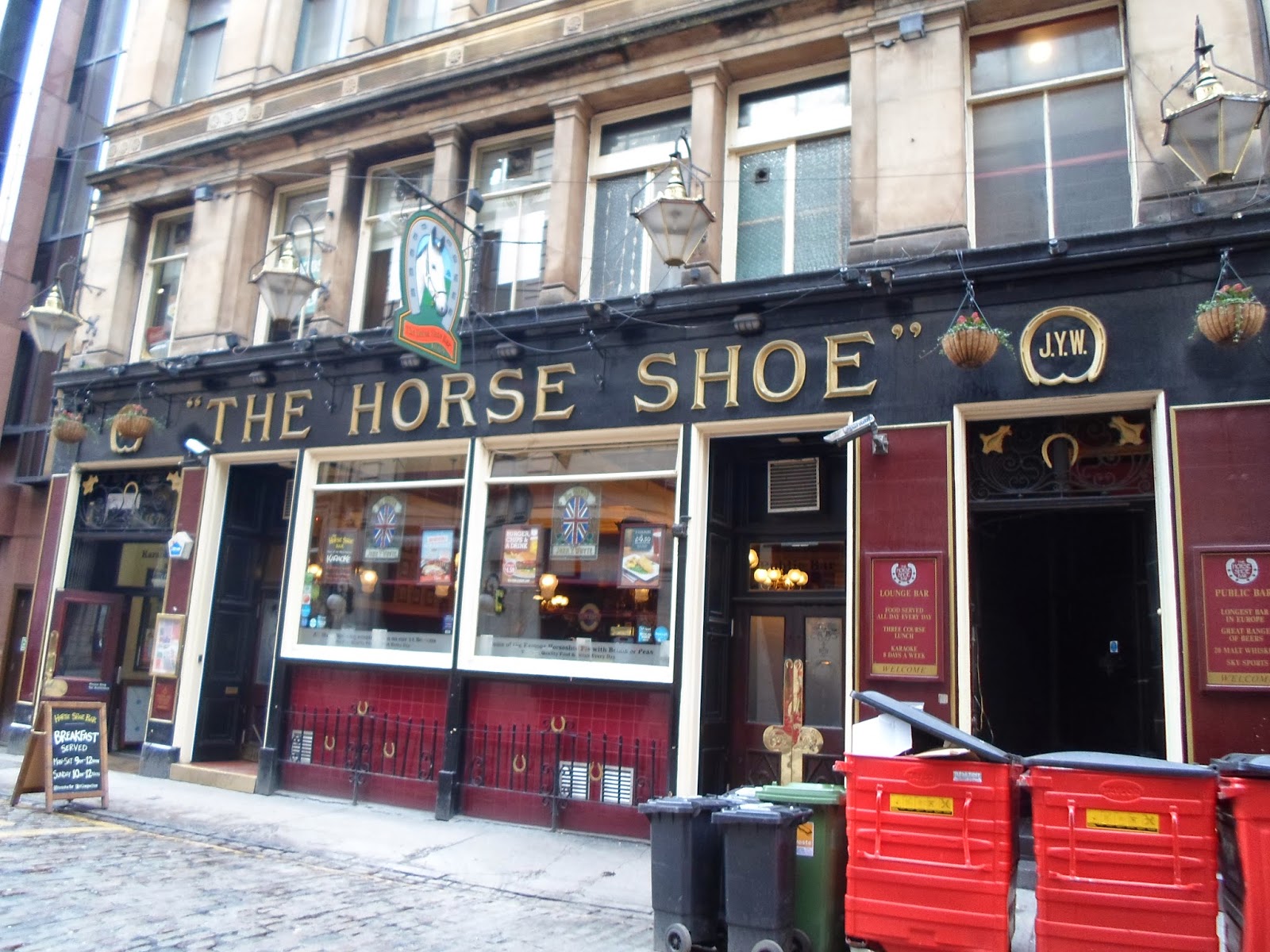 on March 01, 2015
Email ThisBlogThis!Share to TwitterShare to FacebookShare to Pinterest
Labels: Shotts Bon Accord, Vale of Clyde