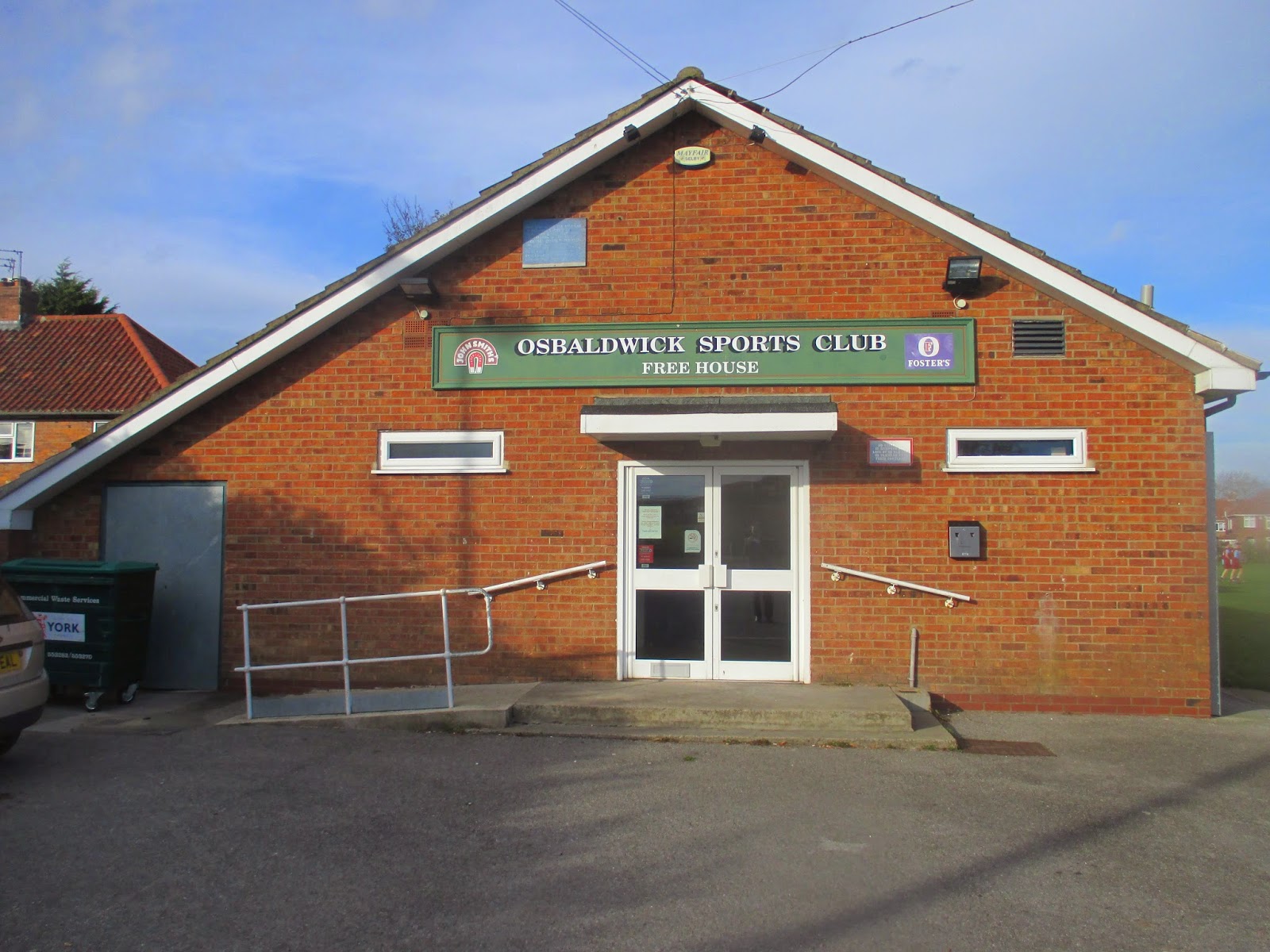 Osbaldwick is a village and civil parish in the unitary authority of the City of York, found two miles east of the city centre. The Osbaldwick Beck runs through the village, which is part of the tributary system of the River Foss. The village has been in existence since at least the 11th century and is mentioned three times in the Domesday Book as Osboldewic. The suburb is named after Osbald, an earl in the kingdom of Northumbria and is the resting place of the Venerable Mary Ward(23 January 1585 – 30 January 1645) in Osbaldwick Churchyard.
There is a total lack of info on the interweb on Osbaldwick FC, the only information I found was that they are one of the most successful clubs in the York Football League, having won the league title ten years off the belt between seasons 1983–84 and 1992-93. 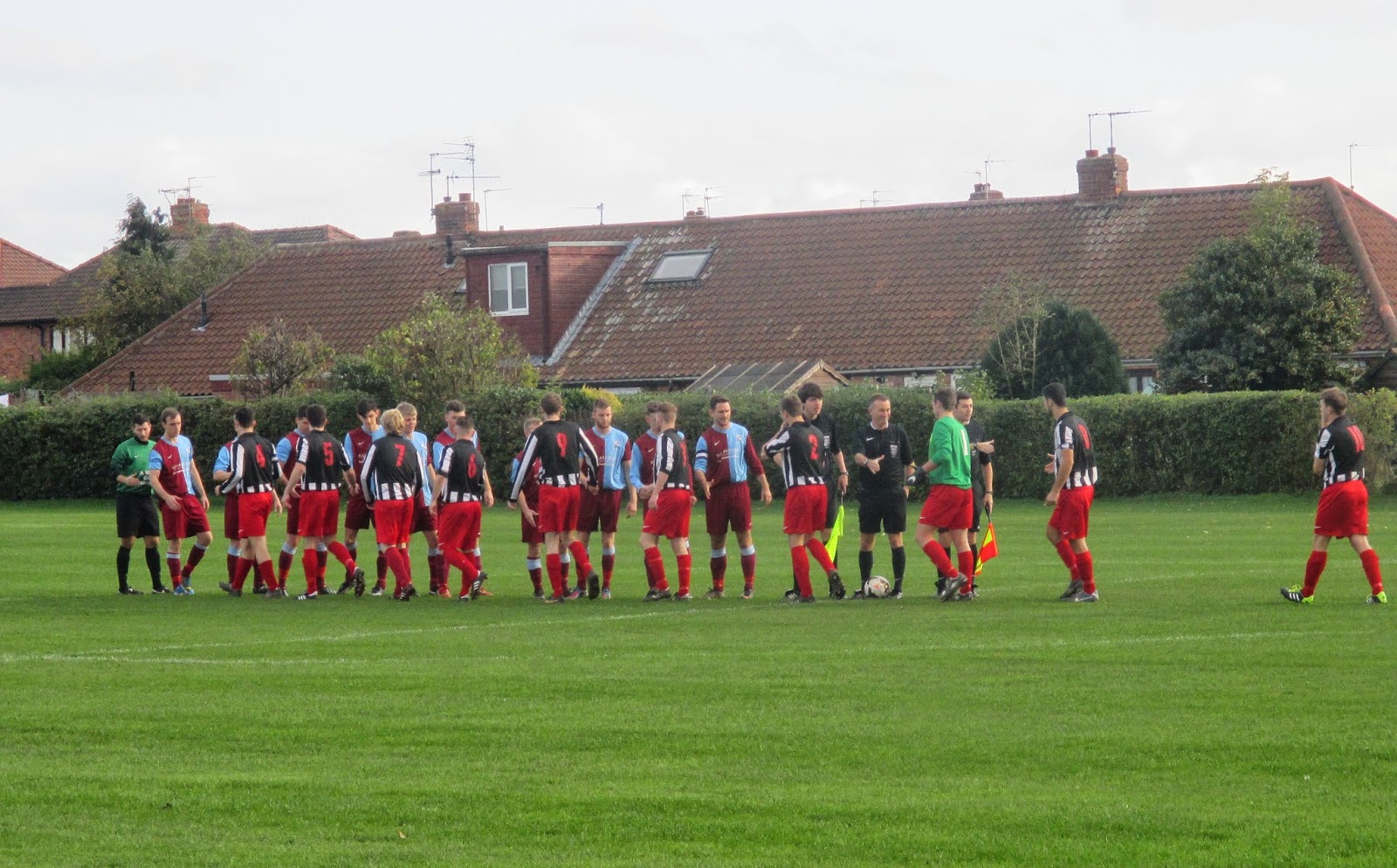 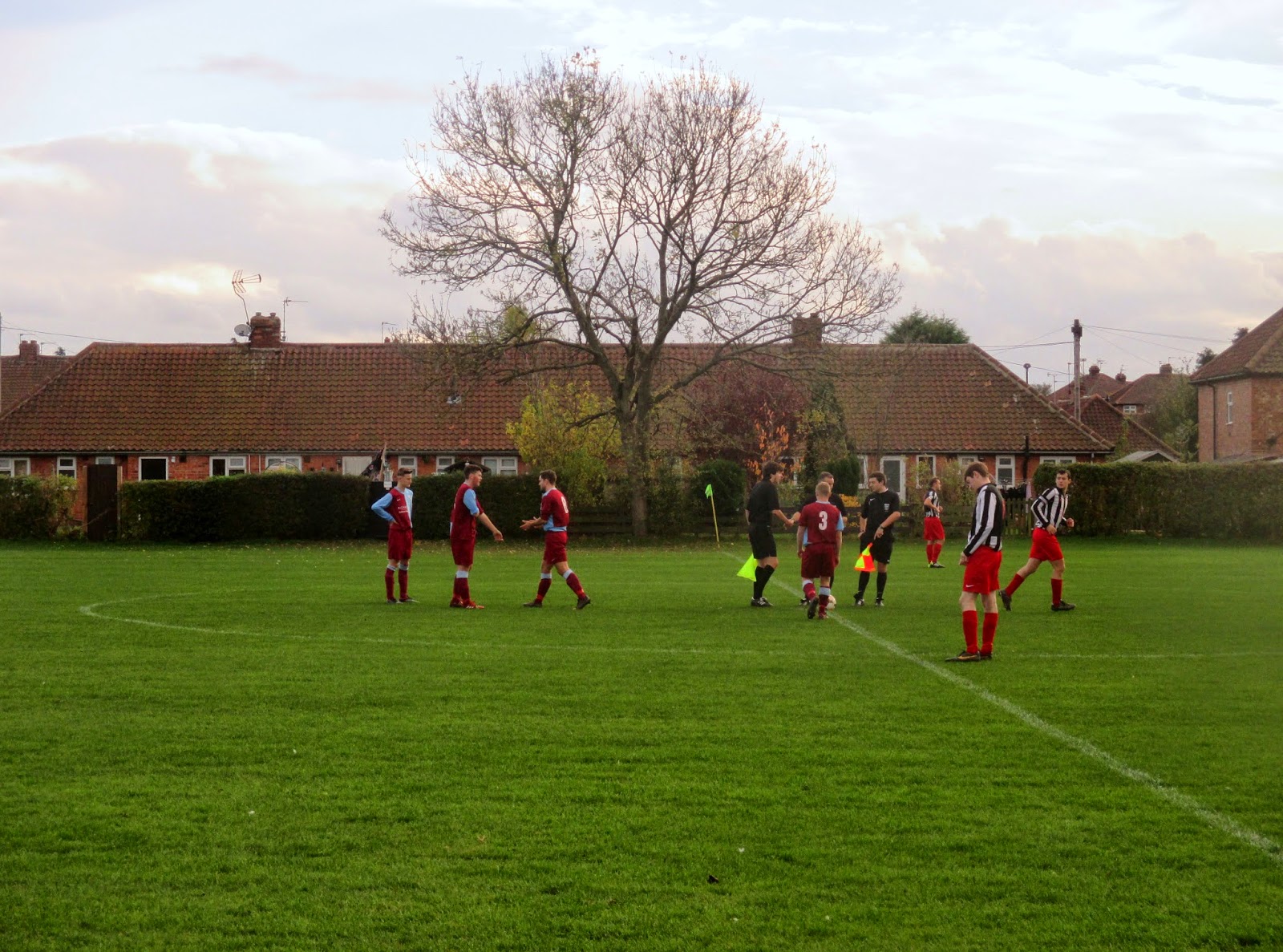 I made an early start in York so I could do the City Academy game in the morning before this match at Osbaldwick later in the afternoon.  My first port of call was the Punch Bowl for a ‘Spoons breakfast, but the combination of a lack of urgency by the staff and plenty of hungry punters meant I abandoned the pub and heading to the bus stop. The number 40 bus was due at 1005 and as its an hourly service, I had to catch it or miss out, however the terminus at Exhibition Square didn’t show any signs of this bus actually stopping there, so I boarded another bus, jumped off and caught the bus at a later stop. I asked the driver to give me a shout at the Moor Farm stop, but he hadn't heard of it and seemed puzzled by my request, so he dropped me off after the roundabout on Wigginton Road. I started walking looking for the ground, I kept..walking..and walking and eventually running. This wouldn’t normally be a problem for a seasoned runner like myself, but when you're fully clothed and wearing size 10 Dr Marten boots, its bliddy hard work!
The B1363 road was neverending, my quest not helped by no pavements and cars tear-arseing past at 60-70 mph and as I later found out, the bus had dropped me off just over 2 miles away. To cut a long story short I arrived at the Wiggington Road Training Ground soaked in sweat,  just in time to hear the referee's whistle start the game, but not before arriving at a mystery football ground, running through a farmers field, having to dodge past a massive turkey(whose days are numbered) and nearly throwing up due to the incredibly strong stench of manure in the air.
After enjoying a good game between the York City and Hull City U-18s which you can read about here, I ran back to the closest bus stop, which was clearly marked with the words….yes...you guessed it... Moor Farm stop. 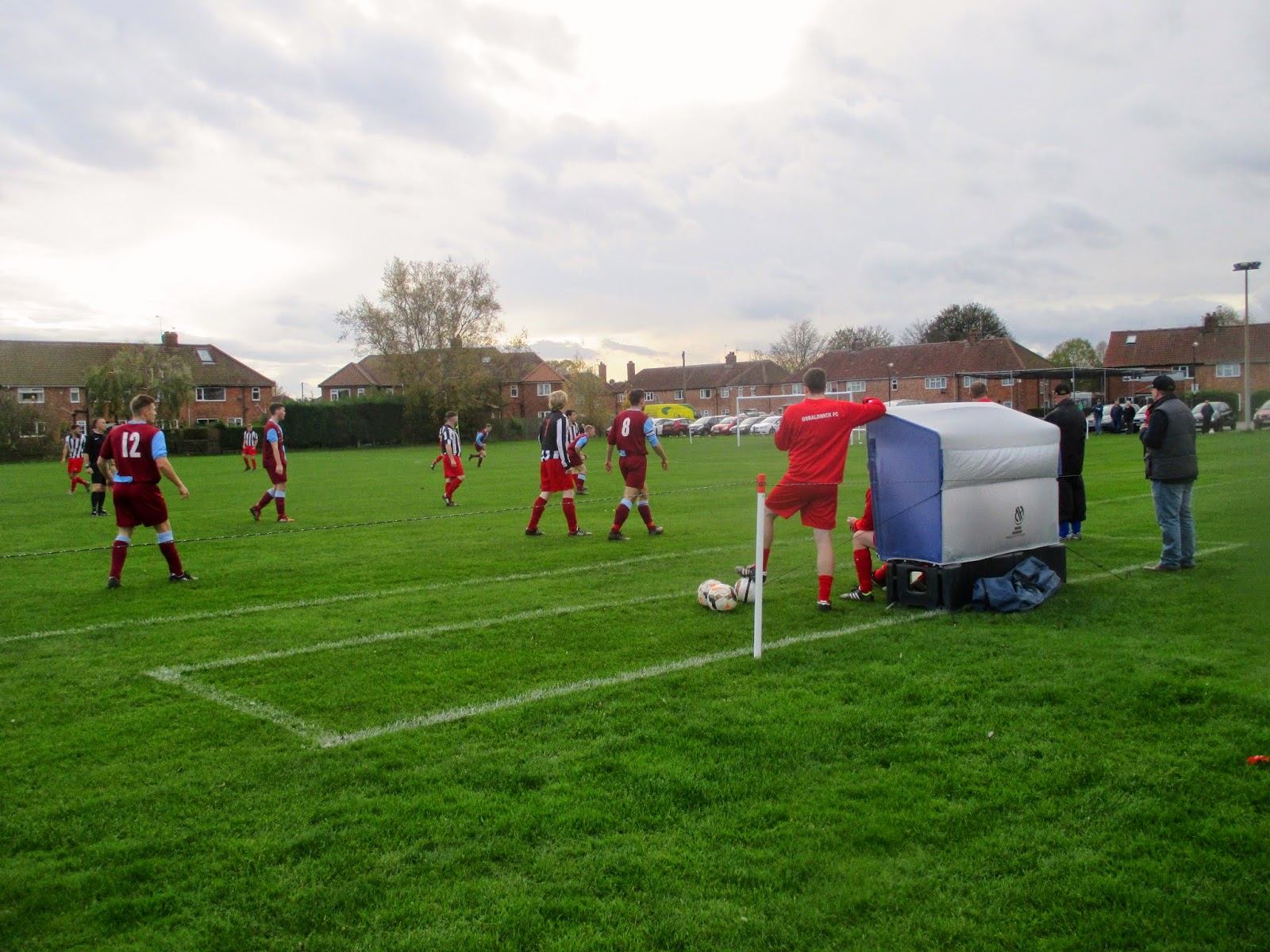 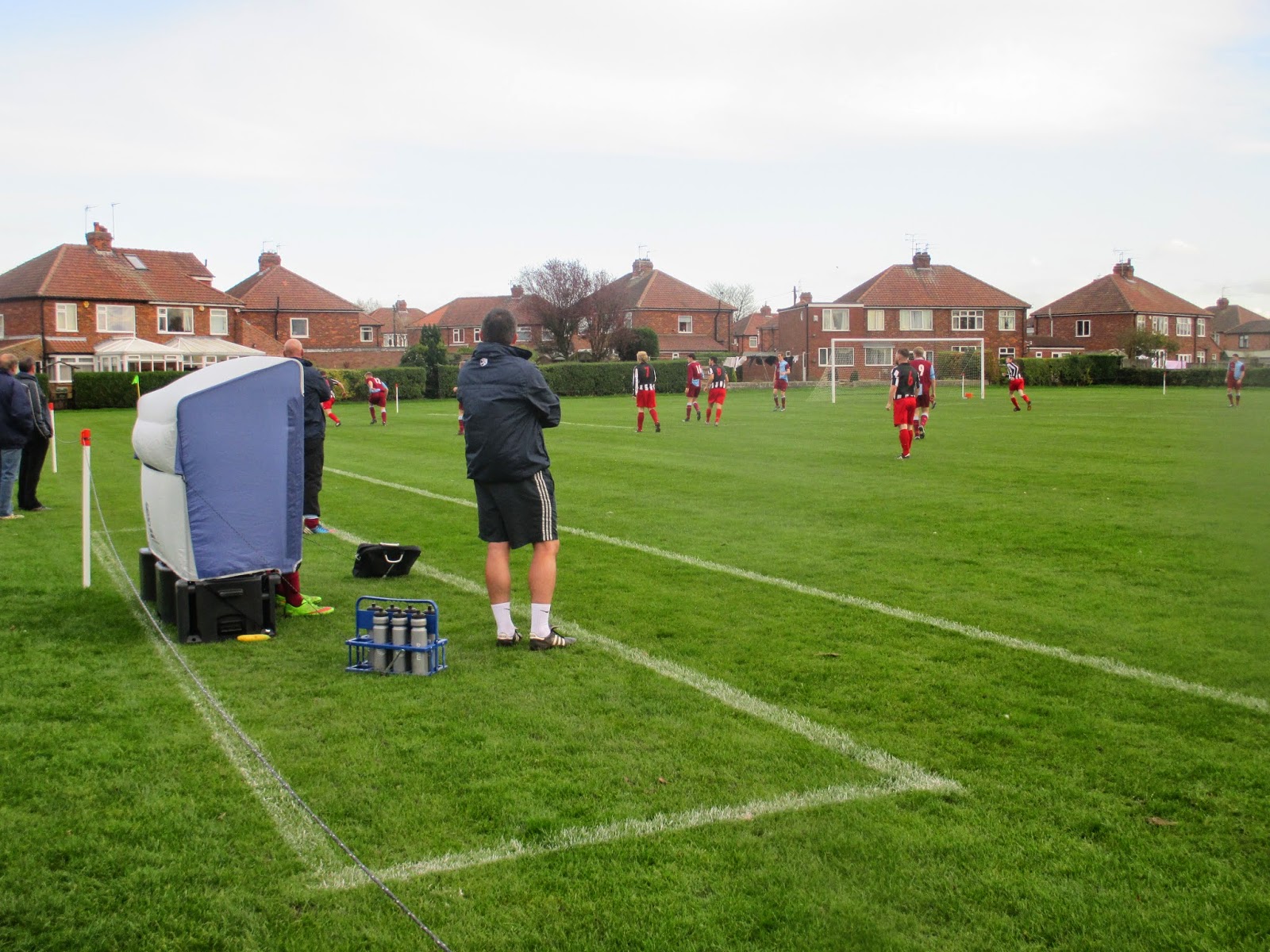 The bus to Osbaldwick was spot on. I walked down to Piccadilly where the number 8 service was just pulling in and within 10 minutes I arrived on Hull Road, then it was a 5 minute walk through the housing estate to The Leyes. On arrival I was disappointed to find the Osbaldwick Sports Club closed because I was naturally choking for a pint and after missing breakfast I still hadn’t been fed. The ground is shared with the cricket club so the football pitch is at the near side in front of the car park. The pitch is roped off with temporary tent style dugouts at the side. Just before kick off there was around half a dozen of us waiting for the game to start, I was beginning to think that this could be my smallest attendance, beating the 8 at Heaton Stannington in 2007, but once the match got under way there was about 50 in attendance which swelled to over 70 when I did the half an hour headcount. 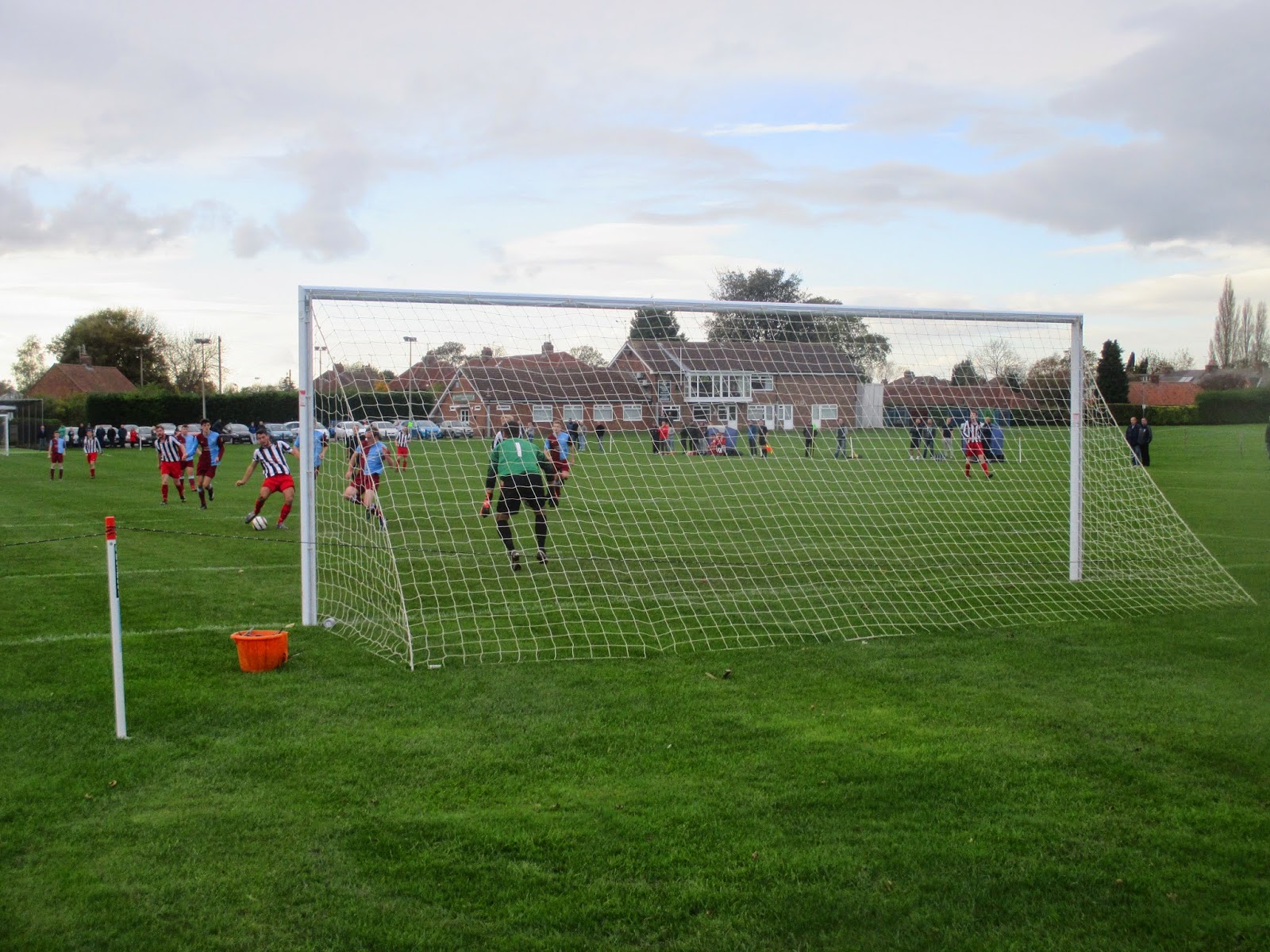 The decent sized crowd didn’t have long to wait for the opening goal, only 30 seconds on the clock when Tommy Medd converted a left wing cross from close range to give Dring the lead. The home team were soon level when Matt Hattee thumped home the equaliser on 18 minutes, but two goals in two minutes before half time saw the visitors take control. On 39 minutes a peach of a strike from James Robinson, firing home from a good 25 yards put them ahead, quickly followed by Sam Kitson running onto a neat through ball to score a minute later. Ozzo grabbed a lifeline in injury time when a free kick from the left flank fell to Tom Wheatland who fired home to make it 2-3 at the break.
The second half was finely poised with the next goal crucial in terminating the final result. That crucial strike came on 64 minutes with a clinical finish from Medd after the ball had twice pinged off the crossbar, and the victory was sealed late on when a quick counter attack was finished off by Liam Robertson to wrap up the three points.

After the game I was quickly back in the city centre where I finally had a quick bite to eat before heading to the 2 Wetherspoons pubs to mark of some more beers in the Real Ale Festival bingo. I caught the 1809 back home, meeting the breadknife in Newcastle for more bingo bevvys, which rounded off a very long and eventful day. 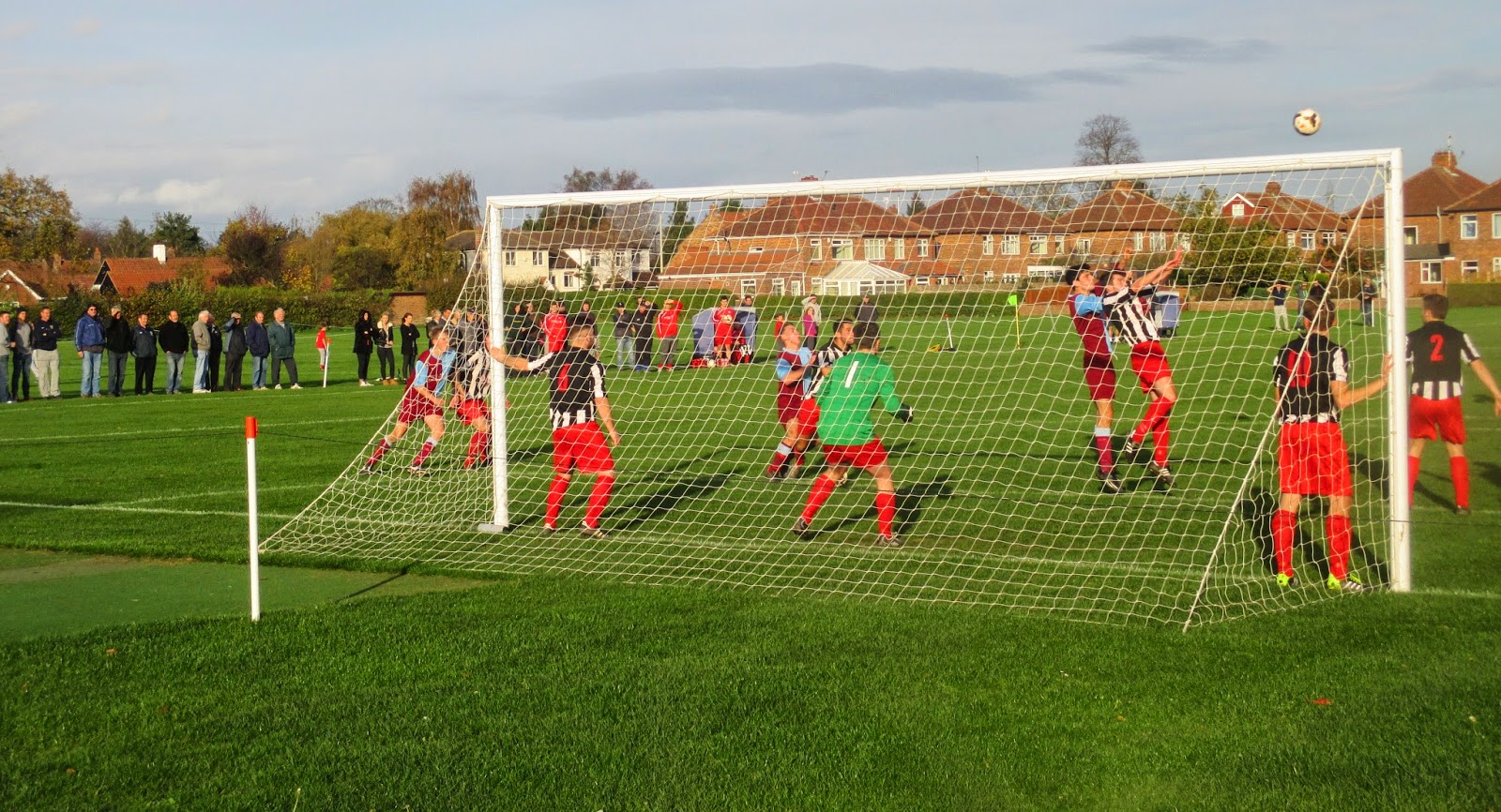 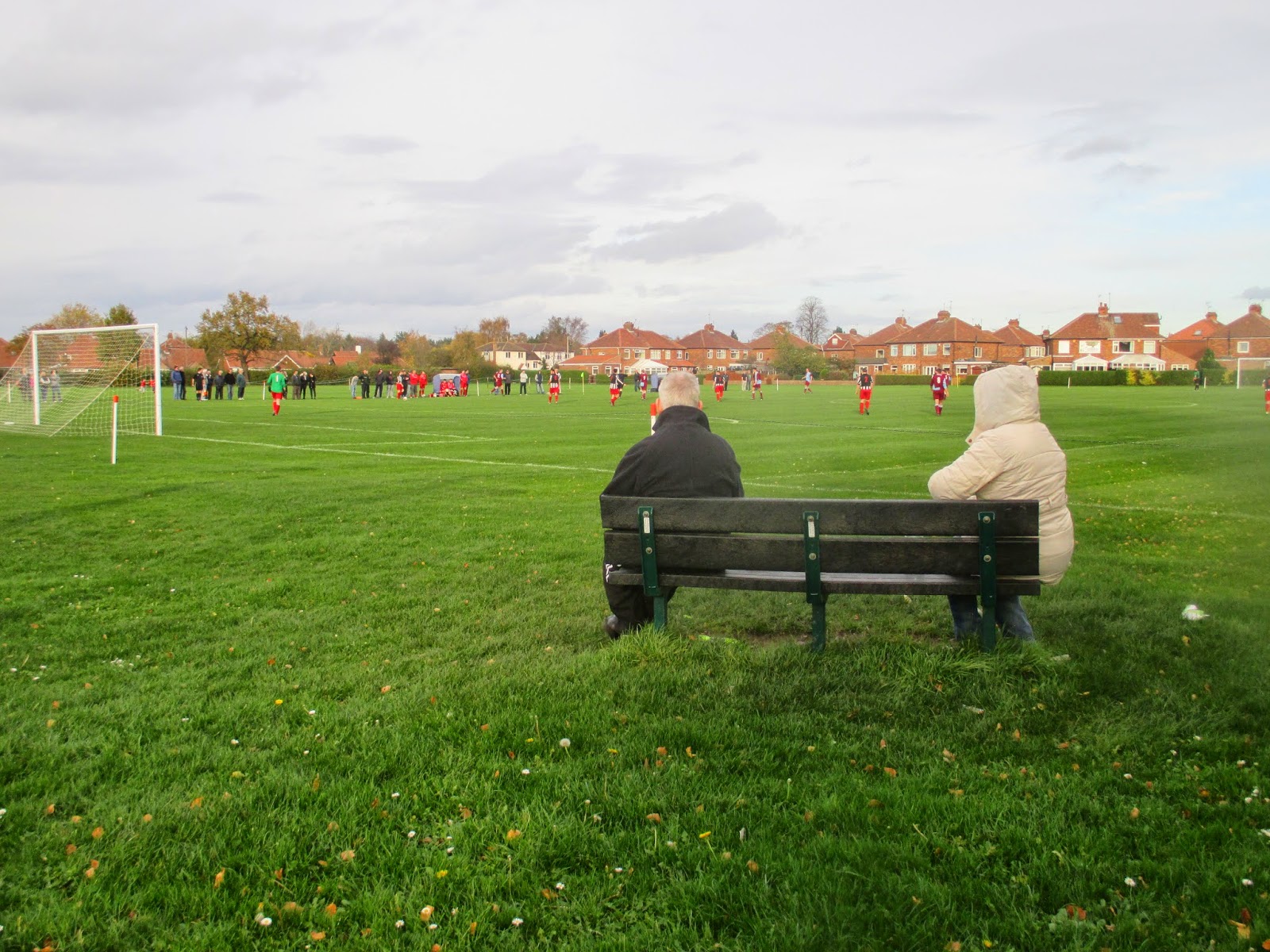 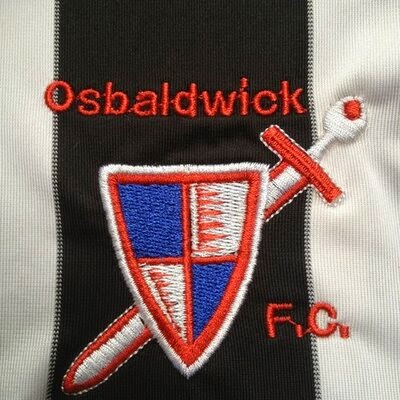