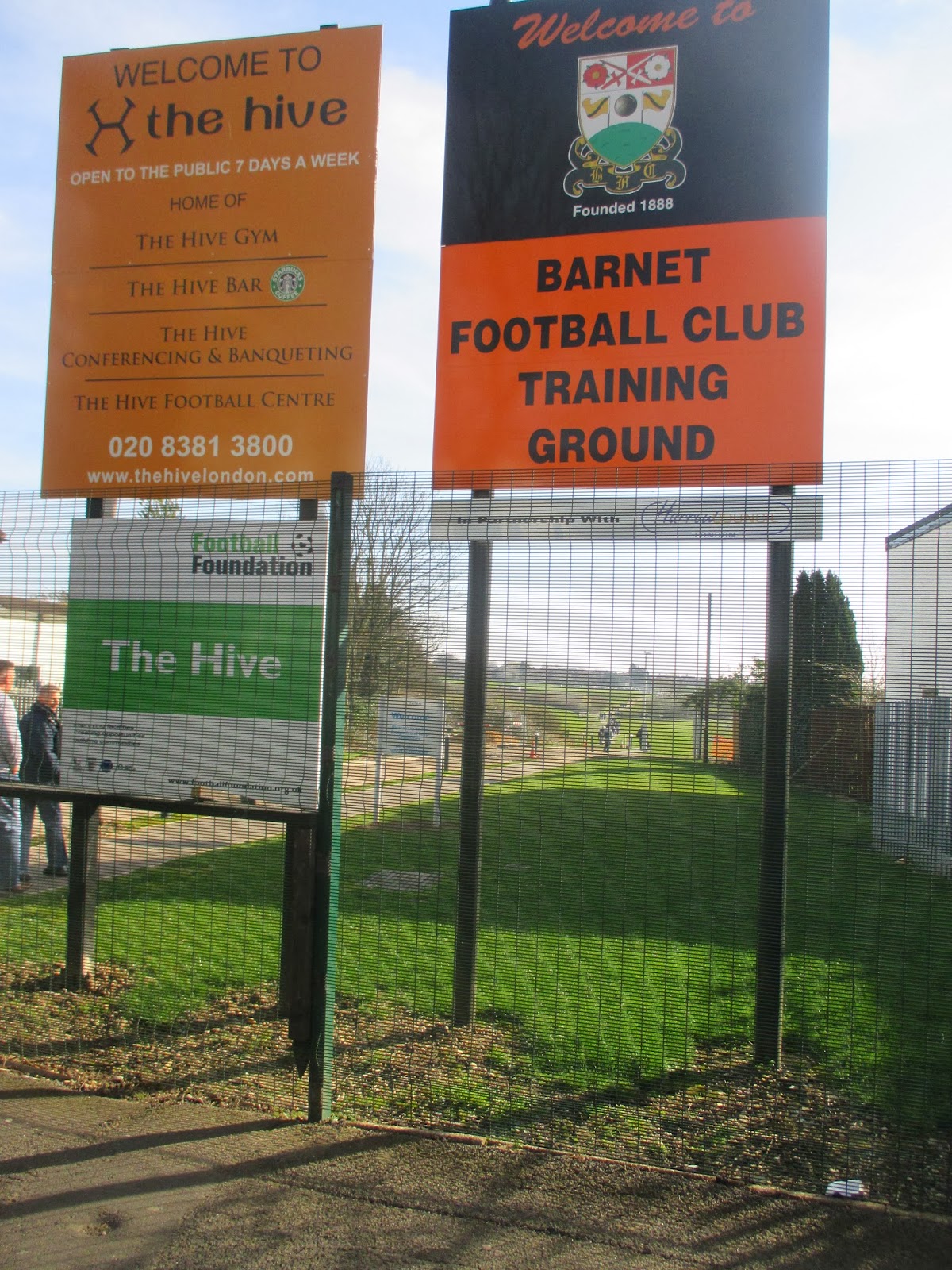 After the disappointment of being unable to tick off Welling United because of the weather last month, I was again back in the smoke for a Gateshead away game, this time visiting Barnet’s new gaff in ‘Arrrow, the aptly named The Hive Stadium.
Since my visit to Underhill on the eve of the 2010-11 season, The Bees survived by the skin of their teeth to avoid the drop, finishing 22nd in two consecutive seasons before falling through the Football League trapdoor last term,  so they find themselves back in non-league football for the first time since 2005. 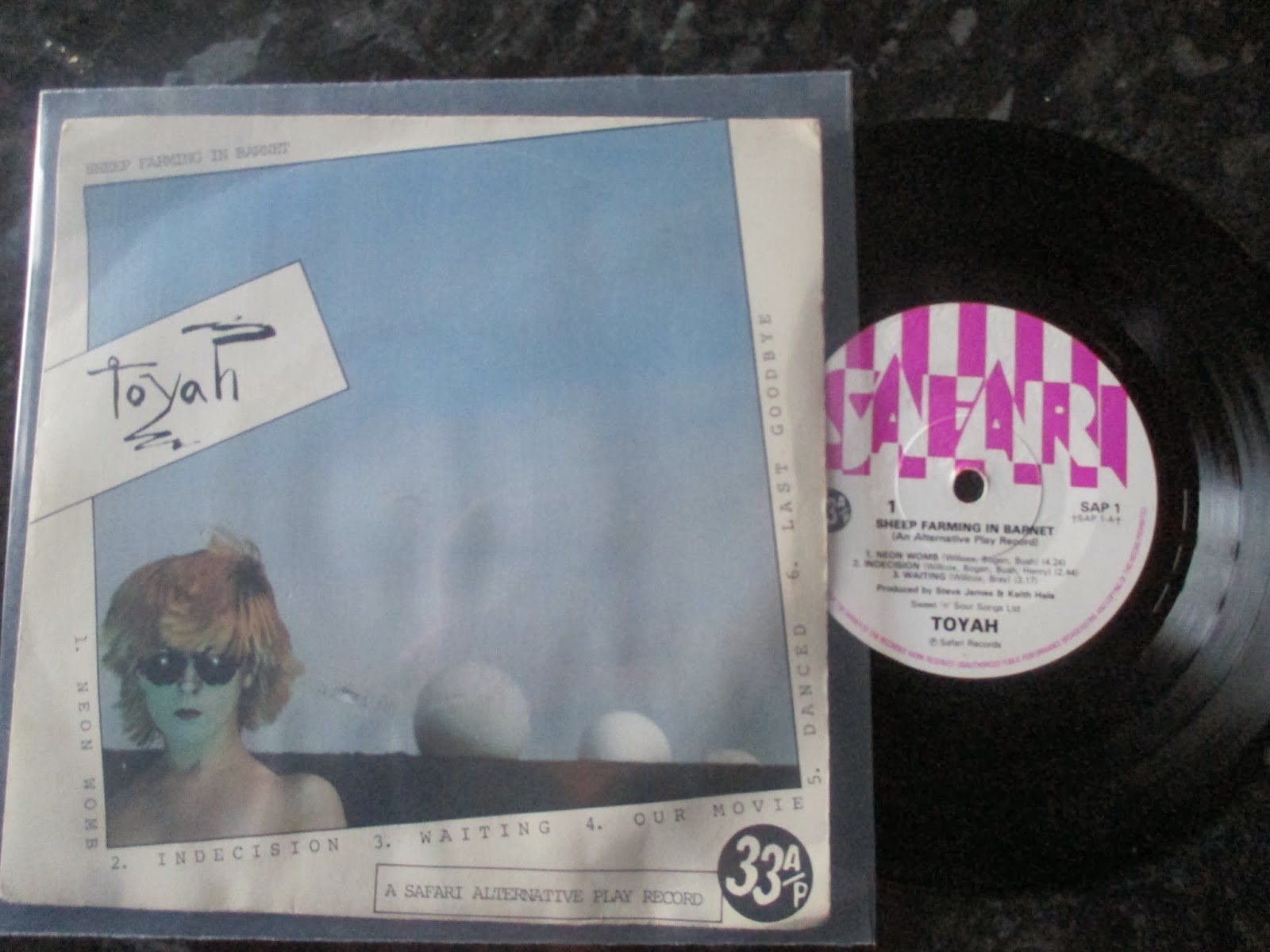 Google searchers looking for information on the club’s history and their former home can read about this on my previous post - My Matchday - 255 Underhill However one thing I forgot to mention in that report was the first time I ever became aware of  Barnet and wondered where it was.  In 1979  I bought a unique piece of 7 inch vinyl by Toyah.  Sheep Farming In Barnet  has 6 tracks squeezed onto a single playing at 33rpm, which record label Safari described as an “Alternative Play Record” The title refers to a peculiar incident when sheep were bizarrely seen in a field in Finchley just off Regent's Park Road. An LP version with an additional five tracks became the band’s debut album in February 1980. 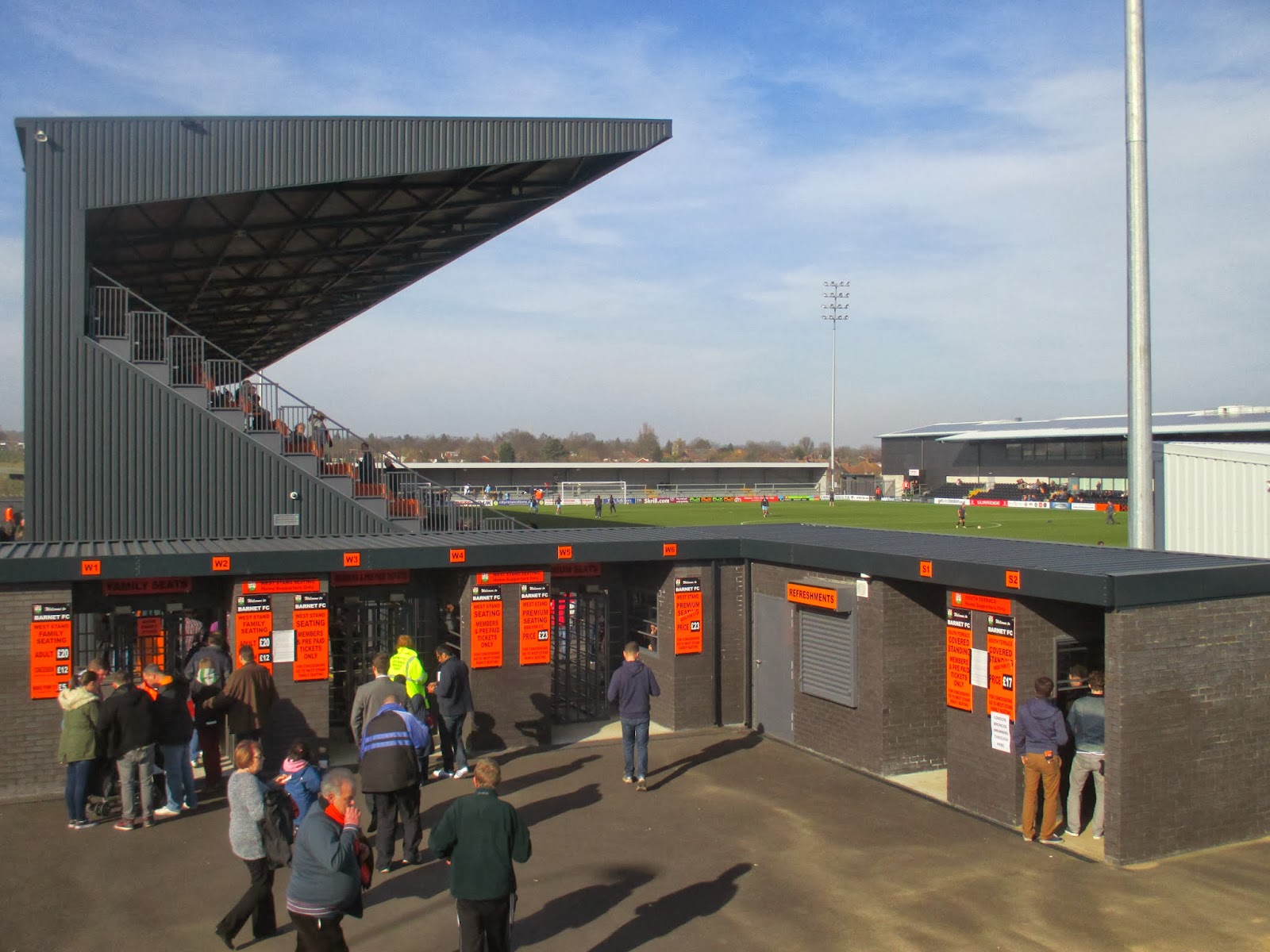 Barnet FC officially announced their intention to leave Underhill, their home for 106 years in December 2011 after they were unable to renew its lease. The stadium construction at the Prince Edward Playing Fields in Canons Park, originally started back in 2003 as a new home for Wealdstone F.C, but within twelve month work ceased on the project when the club's investor's went into liquidation. In 2006 Harrow London Borough Council put the site up for tender and after a failed bid to relocate to Barnet Copthall, the club focused their intentions to move 6 miles south-west to The Hive, in readiness for the 2013-14 season.

The Hive is a ten minute walk from Cannons Park station, located through Barnet’s training ground in Camrose Avenue. The amenities, including club offices, changing rooms, clubshop and The Hive Bar are found within the East Stand. As for the stand itself, it holds 750 divided into ten rows of black seats including press area and the team dugouts, with cover coming from an overhanging roof from the main building. There isn't a tunnel as the players emerge from the north-east corner of the ground.
The West Stand has a capacity of 2,700 decked out in amber with two strips of horizontal black seats. and an electronic scoreboard. The stand is a single tier block with a cantilever roof and no supporting pillars, with the Jubilee Line running behind the stand, so you get a good view of the stadium as you arrive on the tube.
Behind each goal are two identical covered terraces which are prominently silvery grey with ten steps of terracing, crash barriers and the roof without any other flashes of colour. 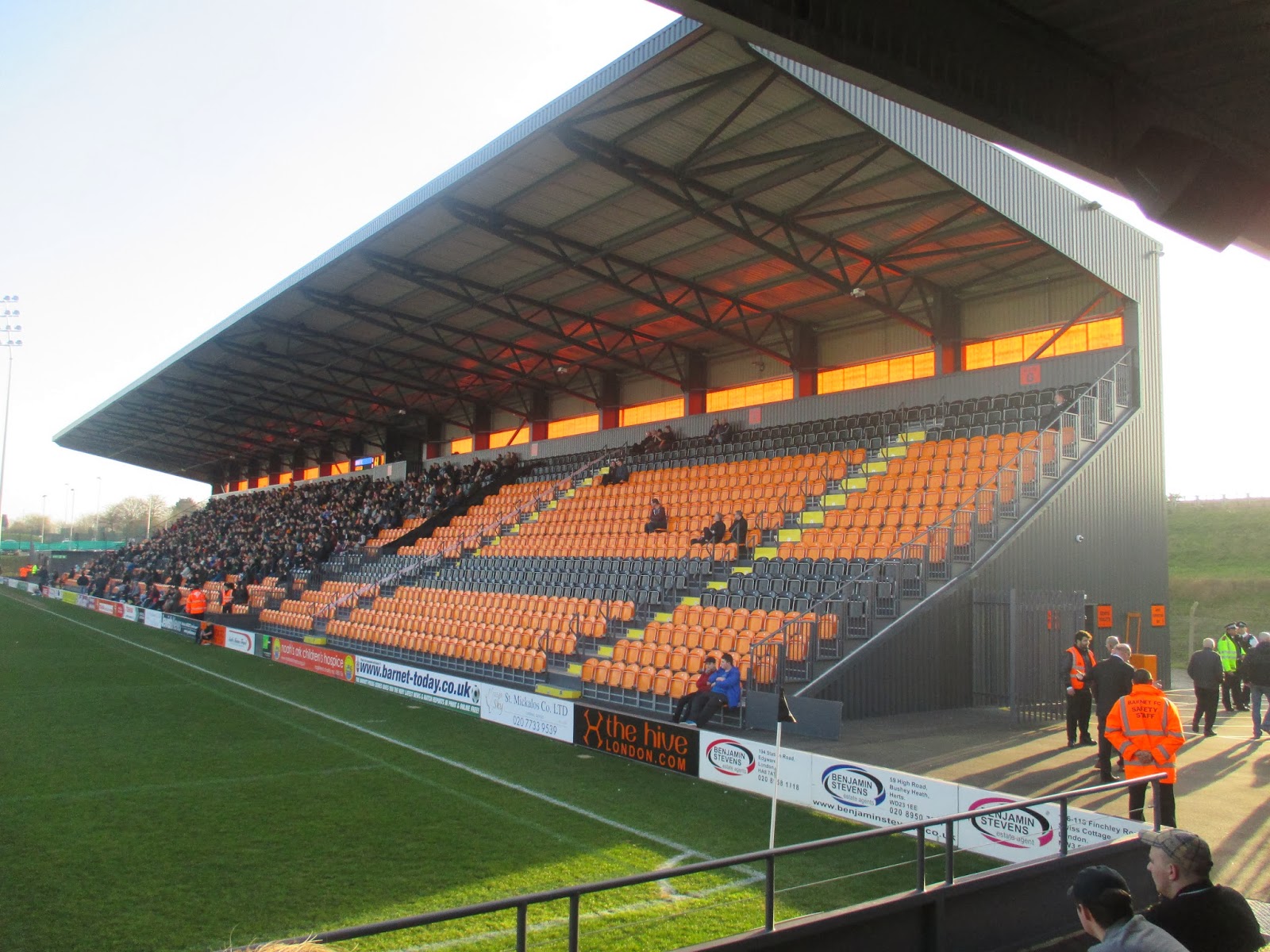 The club successfully kicked off this season within their new surroundings with the first match played against Ipswich Town in a pre-season friendly on the 20th July, but there's a sting in the tale as The Bees were issued an enforcement notice from Harrow Borough Council. The issue over the stadium is regarding the floodlights and the West Stand being built outside specifications in the original agreement. The notice means the club have six months to demolish the stand and three months to remove the lights or risk facing prosecution, however the club maintain the any remedial work shouldn’t be a problem. 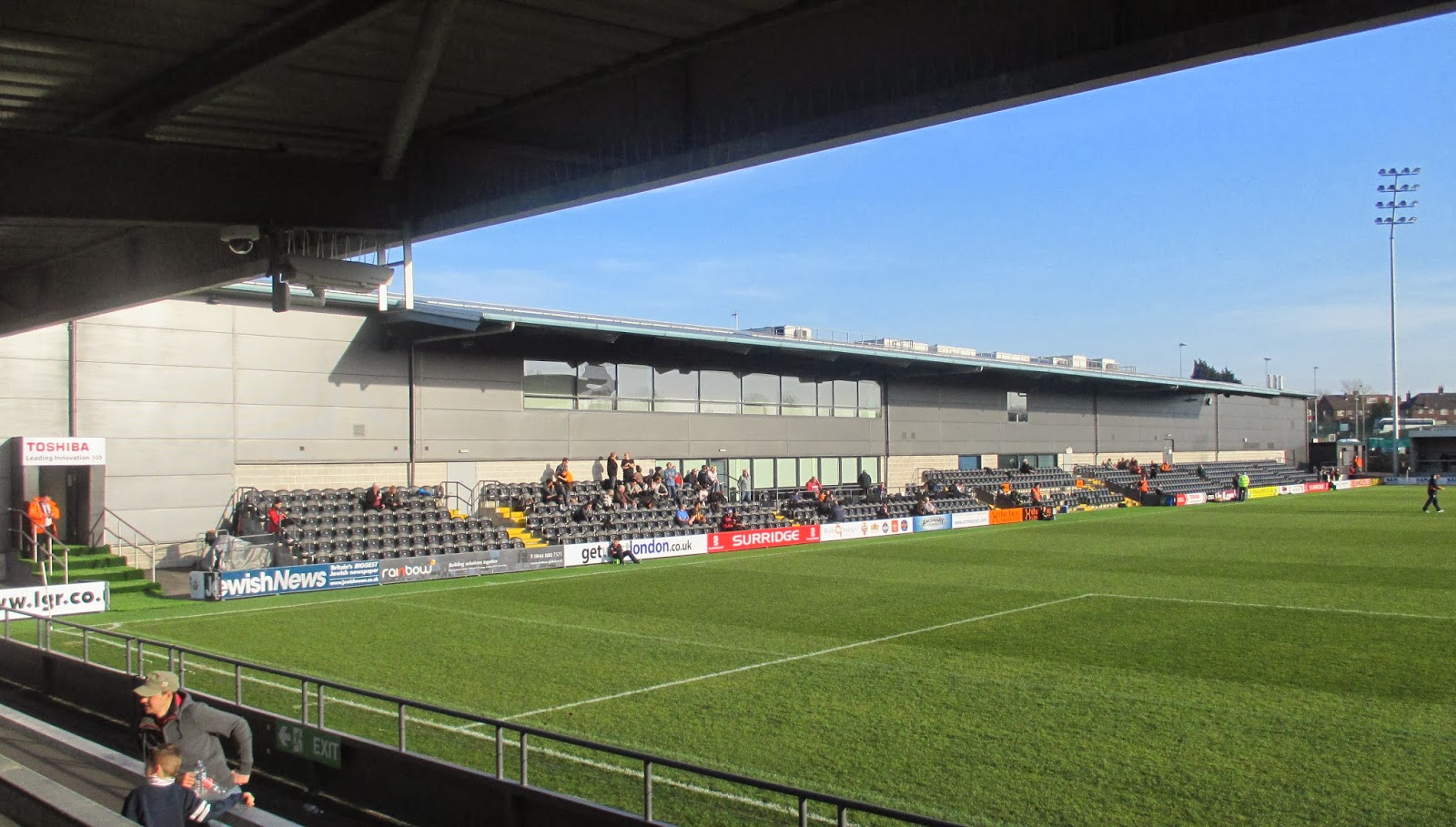 Backed by tremendous support from the Heed Army, Gateshead boosted their chances of finishing amongst the play-off pack with a crucial three points at The Hive. Over a hundred Heed fans had made the long trip to north London and were gladly rewarded with a second half winner from Jamie Chandler.
Decent goal scoring chances were minimal throughout the game, especially in the first half as both teams struggled to adapt to the bright sunshine and the sudden rise in the temperature.
The match improved in the second half with Oster wasting a good opportunity for the visitors, while Charlie Adams looked Barnet’s best bet for a goal, with one effort producing a fine save from Bartlett at the near post.
Just as a goalless draw was looking the most likely outcome the decisive goal arrived in the 71st minute, when Oster chipped a through ball into the path of Chandler who timed his run to perfection and his looping header found the top corner of the net.
This win has The Tynesiders still in with a good shout at the top ,while Barnet move down to fourth as the play-off positions at top of the Conference table changes weekly and its all to play for as the season heads into the final straight. 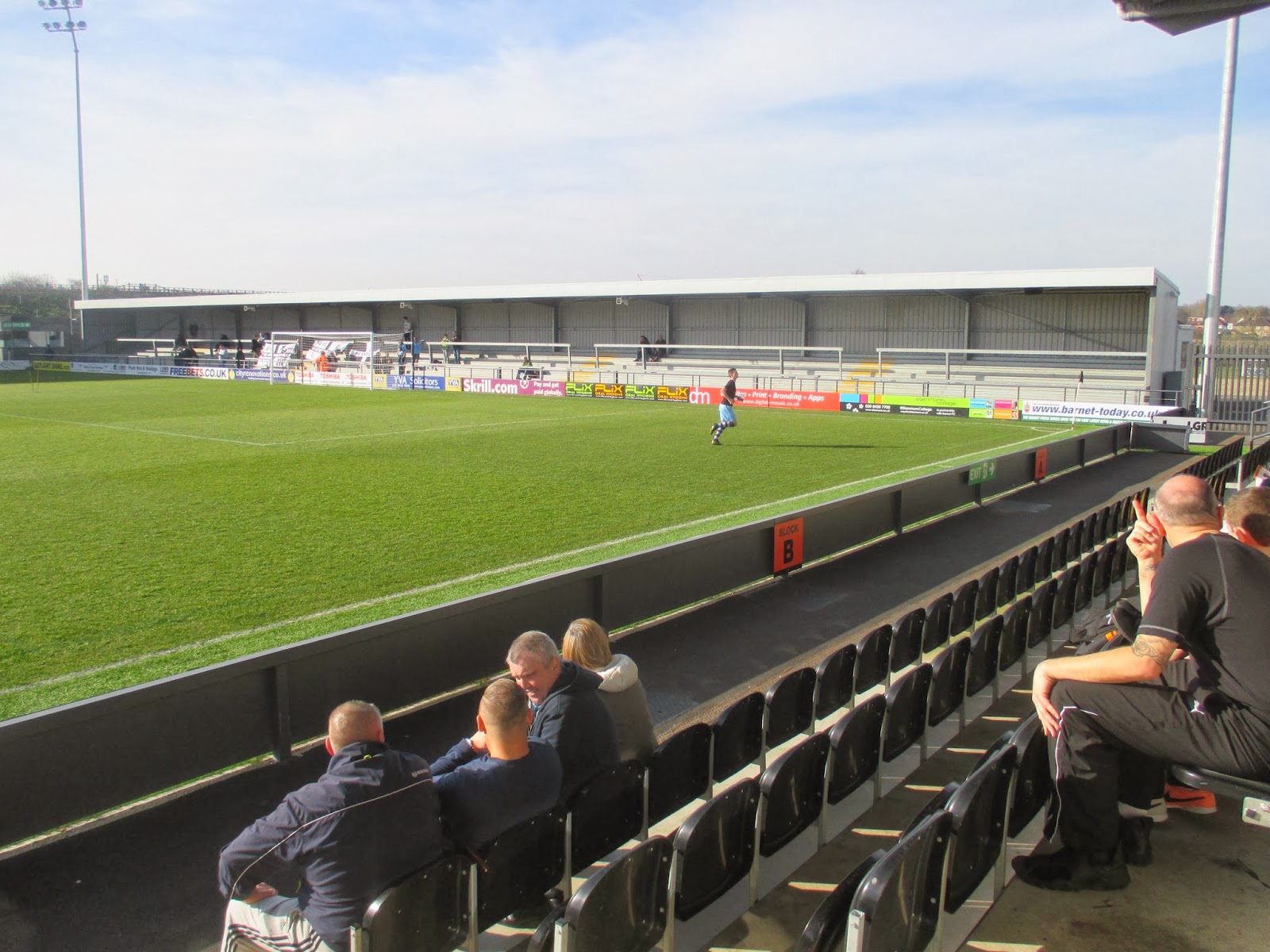 I set off on the 0722 from Newcastle to Kings Cross feeling quite dapper and in good spirits. There was a touch of spring in the air and I felt like a new man having on matchday eve removed my 5 month old beard.(From incredibly hairy man to bonny lad within 10 minutes...Eddy)
My pre-match plan was to tick off a few more JDWetherspoon pubs, starting off at the Sir John Oldcastle in Farrington for breakfast, before calling points on the Jubilee Line. I stopped off at Finchley Road, Kilburn and Kingsbury, meeting up with Squad#111 Steve Mann on route, who had traveled up from Hastings. As well as Steve, it was again good to see Squad#108 John Robinson from Somerset and #196 Keith Arthur from York, plus it was nice to have a bit crack with some of the Heed Army who I've never seen in a while.
The only disappointment on my part was running out of time for what would have been my fifth new 'Spoons of the day in Stanmore, but nothing could spoil a fab day in which at long last, I saw a Gateshead win in London for the first time. WA GATESHEAD! 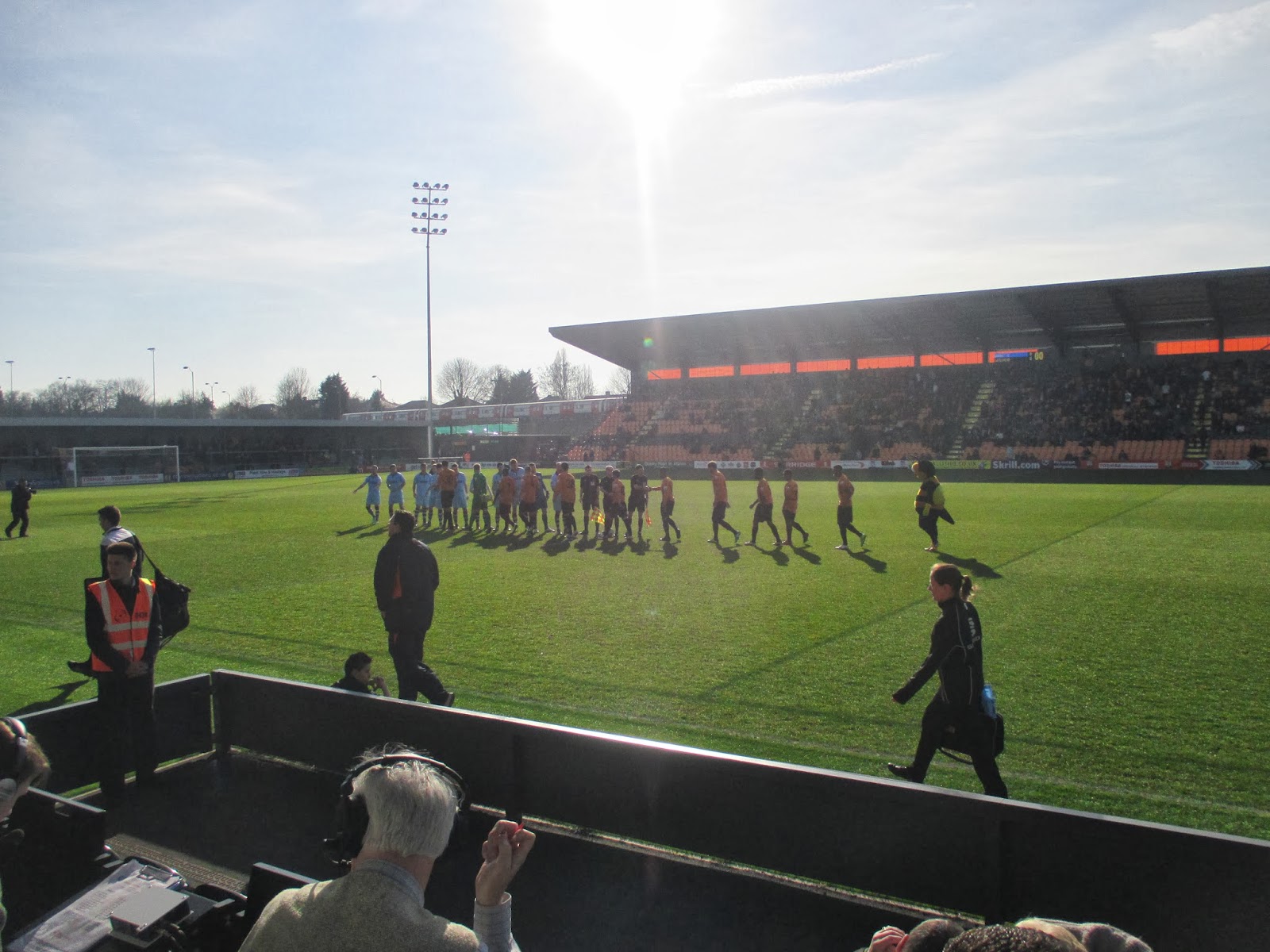 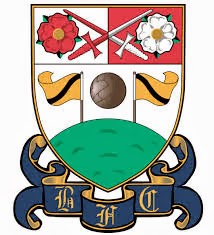