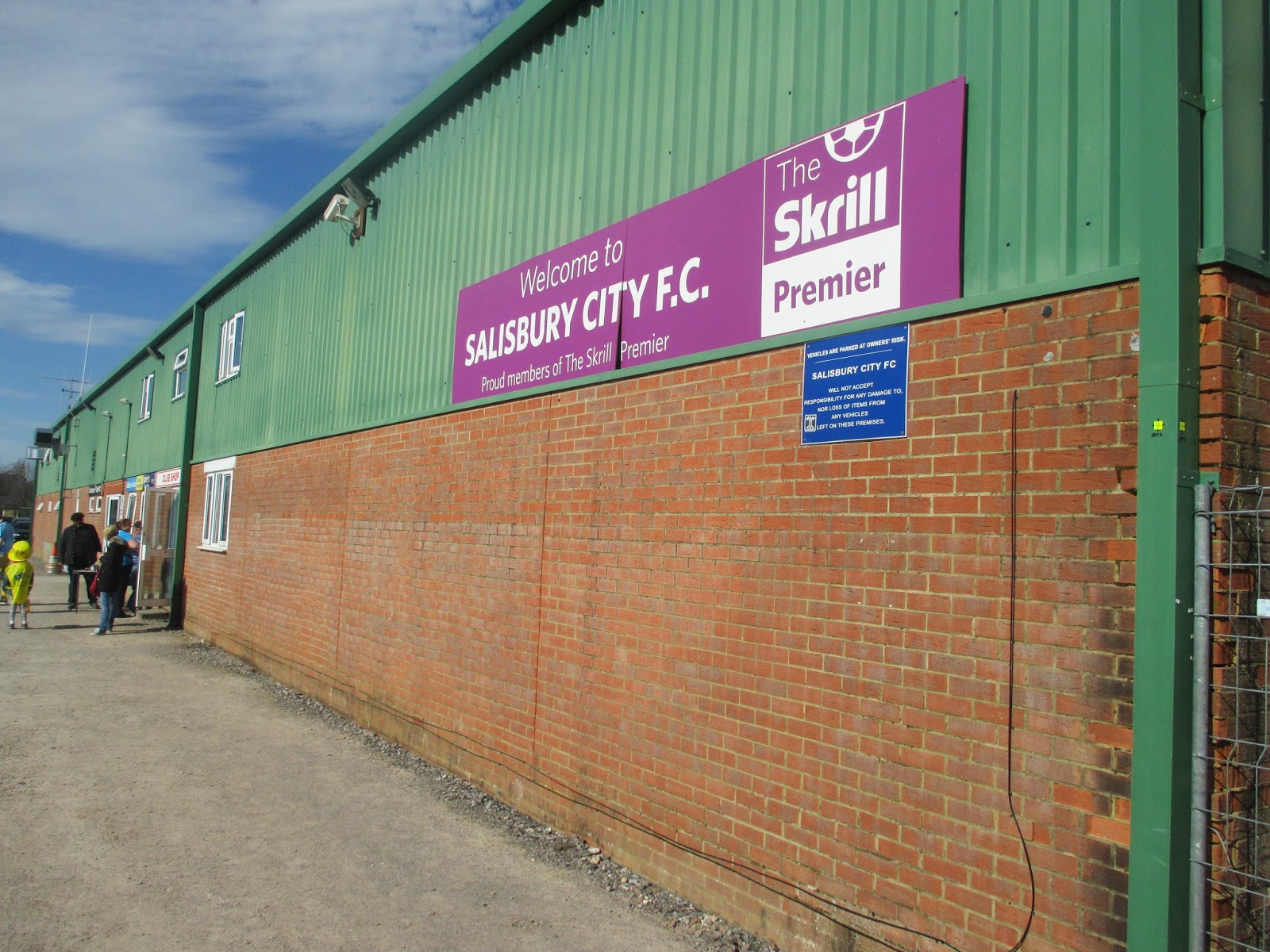 Salisbury City v Gateshead is the longest journey in the Conference this season, a mere 327 miles between the two grounds, so obviously an early start for your author in preparation for a hectic weekend of football, beer, but most of all - plenty of travelling.
The first part of my journey was courtesy of Roy Best aka “Ginger Heed” who along  with Kitman Mark, Vicky Hutch and One-legged Geoff, chauffeured us on the long road trip to Wiltshire. Once Roy picked us up and fuelled up we finally hit the A1 at quarter to eight and after a couple of refreshment breaks, we made good time to arrive at the ground before 2pm. Before the match I was over the moon that Squad#169 Geoff Jackson had arrived from Carlisle as we were meeting up the next day in Newport as part of our weekend double. 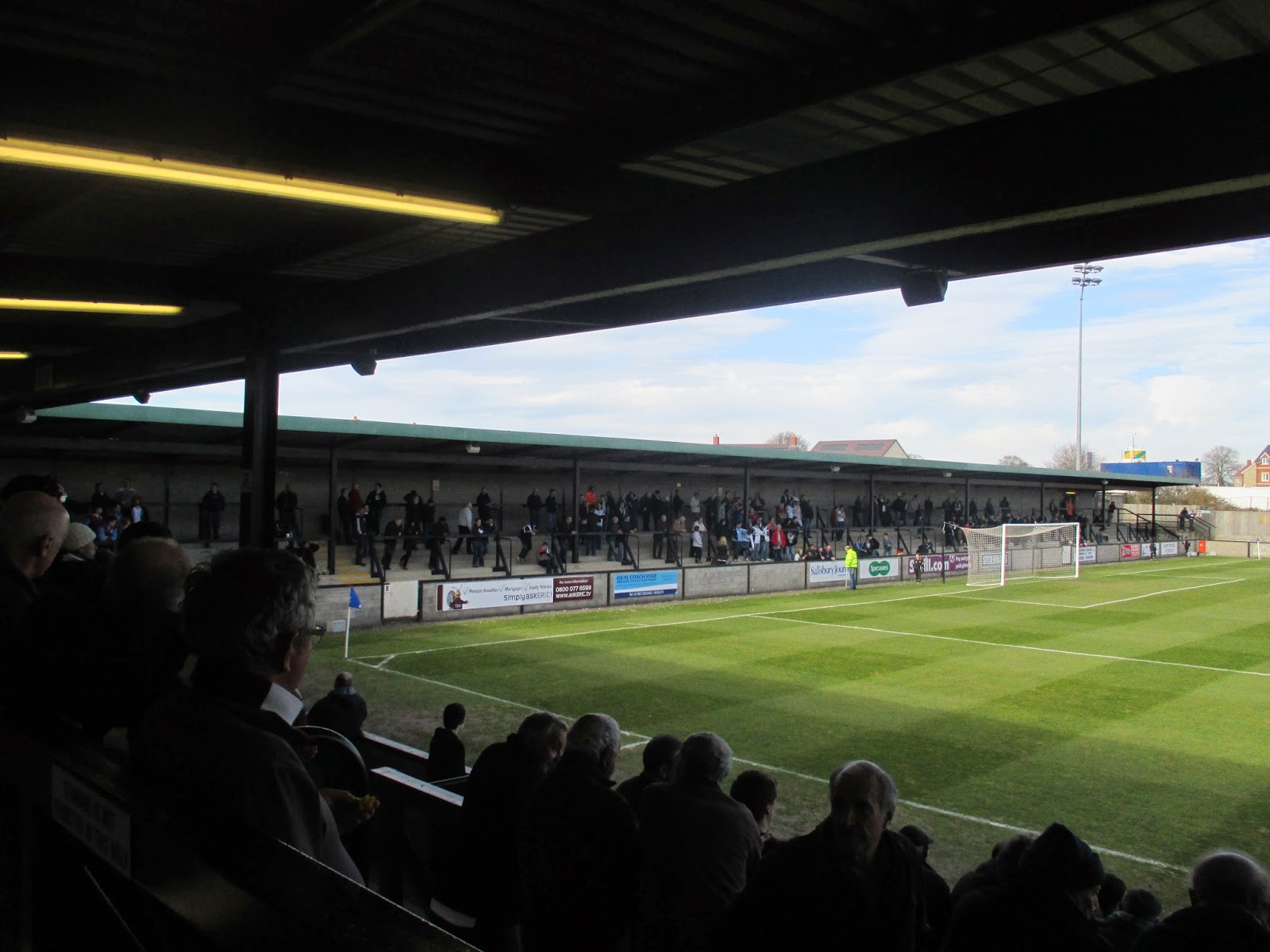 Salisbury is the only city in the county of Wiltshire, which has also been called New Sarum to distinguish it from the original settlement site north of the city at Old Sarum. Salisbury sits at the confluence of five rivers: the Nadder, Ebble, Wylye and Bourne are tributary to the Avon, which flows to the south coast and into the sea at Christchurch in Dorset.
The city of New Sarum was founded in 1220 on a great meadow called 'Myrifield'. The building of the new cathedral was begun by Bishop Richard Poore at the same time, which took 38 years to complete and is a masterpiece of Early English architecture. The 404 foot tall spire was built later and is the tallest spire in the UK. The cathedral also contains the best preserved of the four surviving copies of the Magna Carta and the oldest surviving mechanical clock, installed in 1386.

Salisbury F.C. was founded in 1947, having no relation to a former club of the same name who played in the late 19th and early 20th century. The club entered the Western League and won the Second Division title in their debut season. The club plied their trade in the same league until 1968, winning the championship in 1957–58 and 1960–61, before being elected to the Southern League.
In 1993 Salisbury became City and won their first title with the new name in 1994–95 in the Southern League Southern Division.  The Whites switched to the Isthmian League for a solitary season in 2004-05 season, but on returning to the Southern League Premier were champions. The club progressed further in the Conference South, finishing second and winning the play-offs to reach the summit of non-league for the first time in 2007-08.
City good work on the pitch was squandered when in the summer of 2009 the club faced bankruptcy and were formally placed in administration in September with debts of £200,000. Although the club survived, they’d missed the deadline to pay back a creditor and after a failed appeal, The Whites were demoted two divisions from the Conference to the Southern League Premier Division for the 2010–11 season. However two promotions in three seasons including a play-off triumph over Dover Athletic sees the club return to the Conference this season. 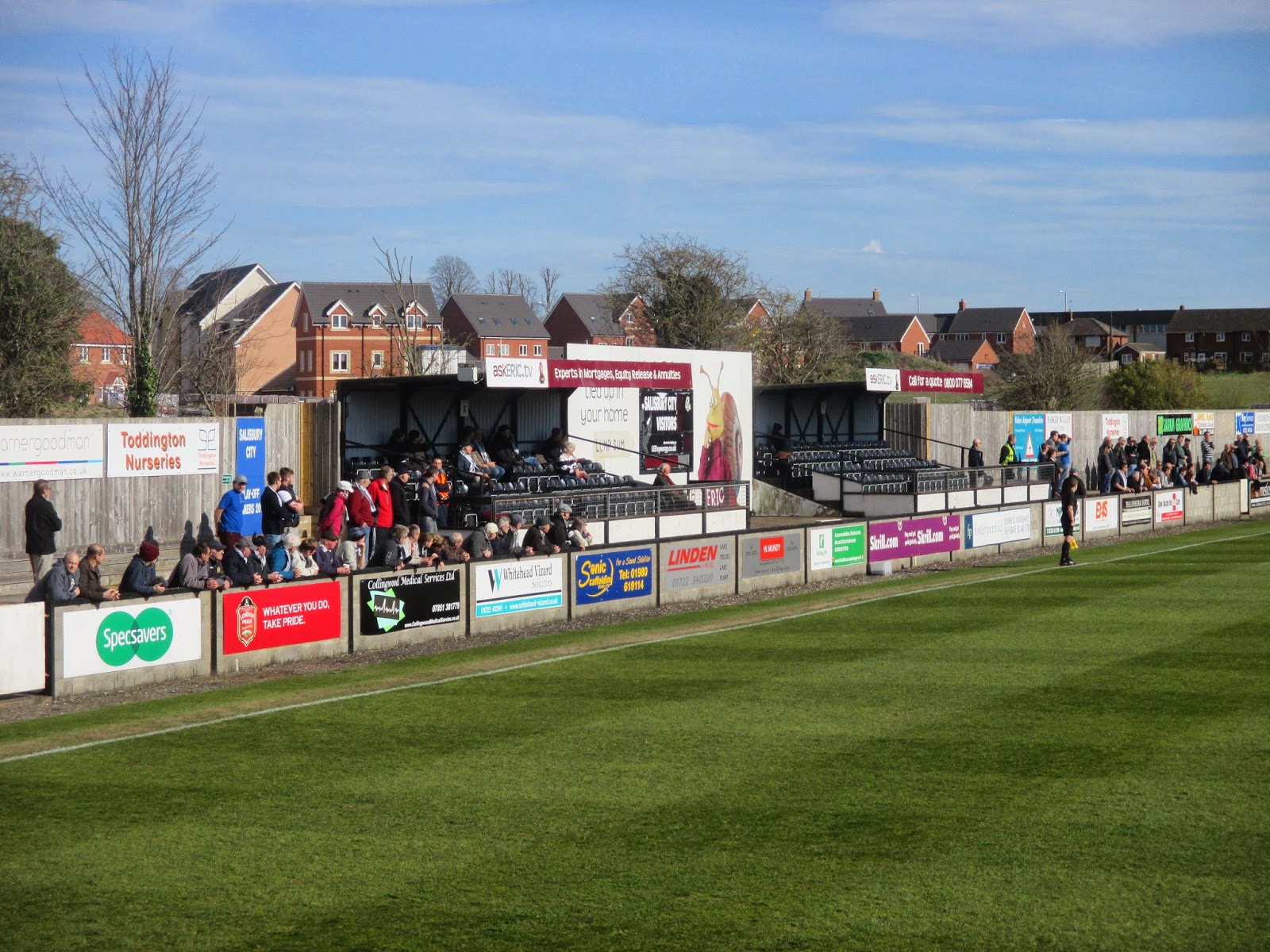 Last seasons play off victory saw a new record attendance at the Raymond McEnhill Stadium with 3,408 spectators witnessing promotion and since moving into their new home in 1997, Salisbury have hosted some big FA Cup ties. In 1998 they reached the first round when a record gate of 2,570 saw a 2-0 defeat to Hull City. That stat was broken twice in 2006, with a first round victory over Fleetwood, then 3,100 fans including viewers on BBC1 saw City hold Nottingham Forest to a 1-1 draw.

Salisbury City moved from their previous Victoria Park home to a new purpose built 4,000 capacity stadium at Old Sarum  named after the then chairman, Raymond McEnhill.
The main stand is similar to what they have at Barnet, with the reception, club offices, changing rooms, Chalkies Bar and club shop all housed in the one building, with seats attached at pitch side with an overhanging roof for cover. The green building has four rows of black and white seats with additional balcony seating upstairs and the team dugouts in front.  Opposite there’s two meccanno type stands, filled with black flip seats and separated by an advertisement board which includes a small electric scoreboard. There’s an additional £2 charge to sit at the Hop Back Side, but on a lovely sunny day not many took up the offer with just one solitary spectator in one of the stands.
As you enter the Ray Mac at the car park turnstiles you notice the pitch is sunken, with the covered terrace at a higher level, which bends around to meet the main stand. The cover at the side has a disabled area and refreshment bar. The rest of the ground has open terraces with another electric scoreboard behind the away end. 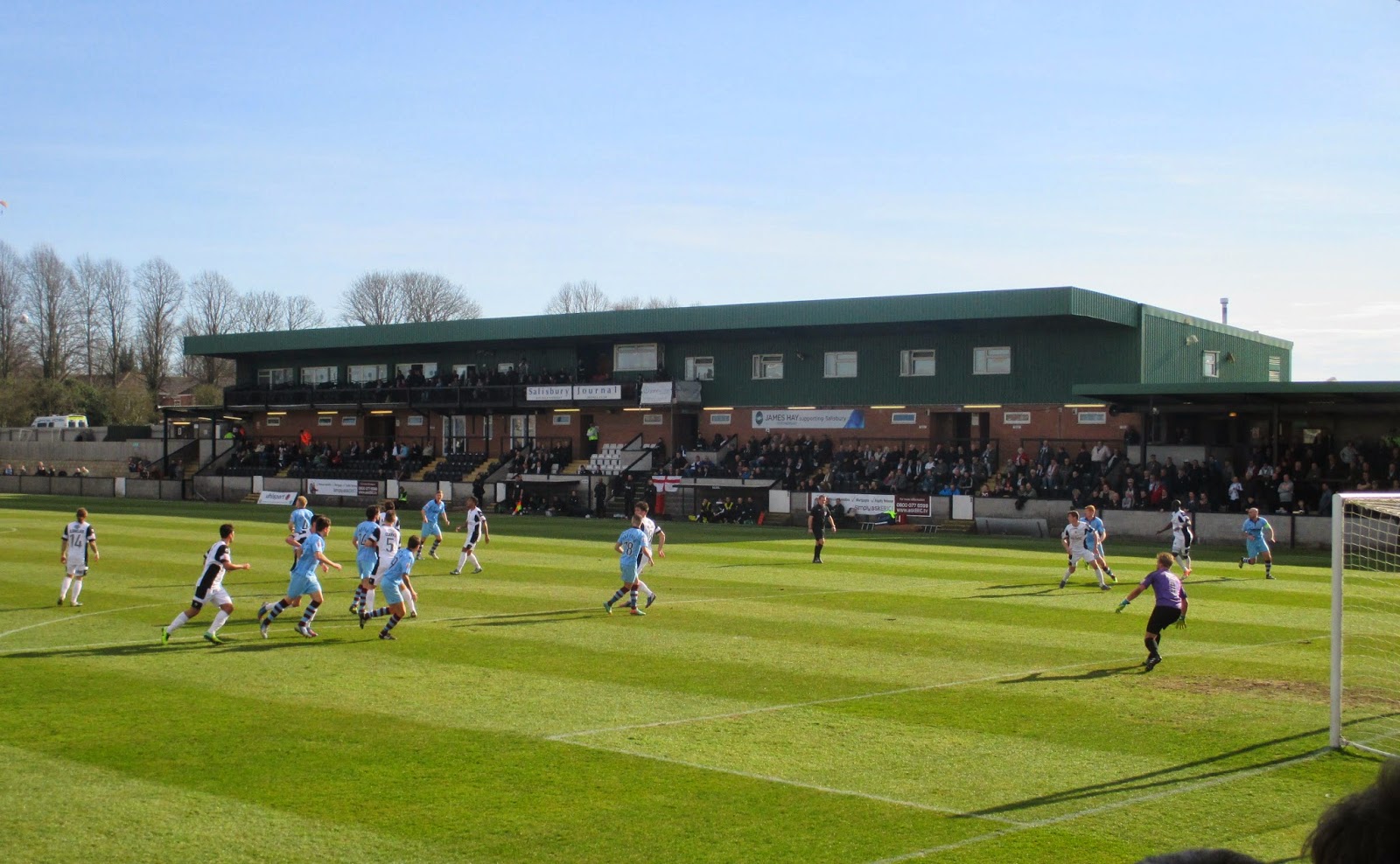 As Salisbury have one of the best home records in the Conference, coupled with Gateshead’s  good away form, my pre-match prediction of a draw was spot on, but one thing I didn’t expect was a bore draw.
The match was similar to the one at Barnet last week with an uneventful first half and Gateshead improving after the break, but this time there was no killer goal to clinch the three points. Throughout the 90 minutes Heed keeper Adam Bartlett wasn’t seriously tested, while James Brown wasted a good opportunity for Gateshead, his weak header failing to trouble Puddy. The best chance of the game came in the 87th minute, when a cross from Walker found substitute Jack Lester who slid in from just three yards out, but he was unable to get a strong enough purchase on his shot and the ‘keeper managed to gather the ball to safety. The point apiece still gives but teams a slim play-off chance, but that late miss could be a crucial two points dropped for the Heed. 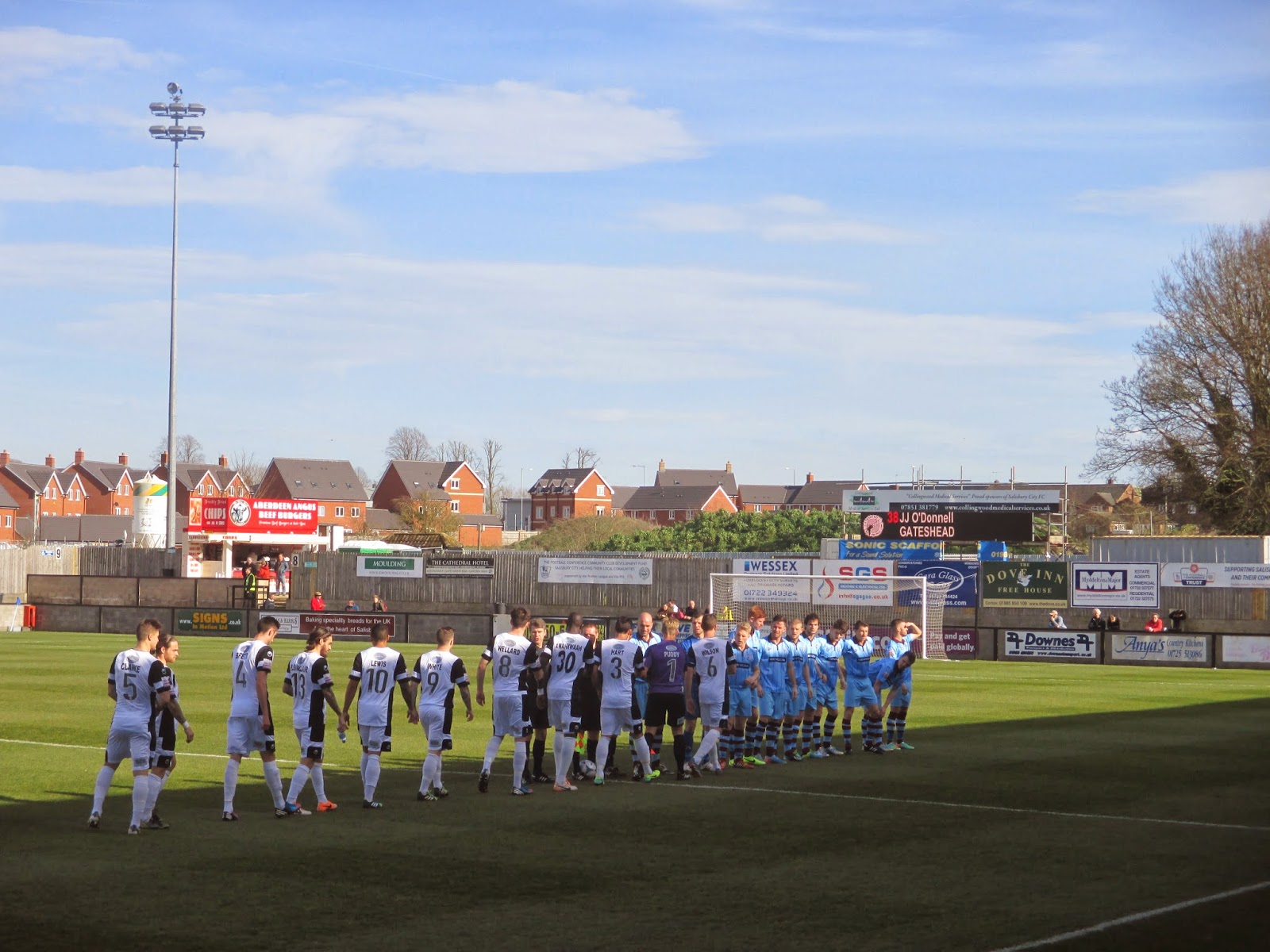 After the match I took the long walk from the stadium to my guest house just on the edge of the city centre. After a spot of relaxation and doing “The three S’s” I was out and ready for a night on the lash in Salisbury. I started off in the Anchor & Hope, Rai D’Or then Cloisters before meeting up with Torchy(Squad#51)Simon Grobari(Squad#185) Salisbury Dave and Bible Mike. Young Michael now lives in Manchester so I haven’t seen him for a while, but he’s still as daft as a brush and now has a remarkable resemblance to Ian Anderson from Jethro Tull. 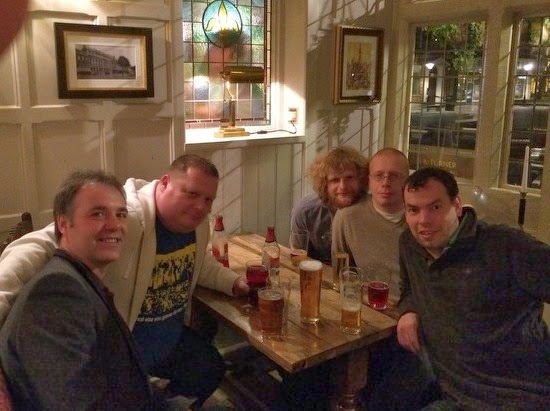 We met up in Deacons, before our ace host Dave lead us around the town, calling at Slug & Lettuce, Kings Head, Haunch of Venison, Ox Row and we finished the night in Yo-Yo. I  successfully managed to  navigate my way back to my digs afterwards, staggering back through the town after an  excellent night in great company. When I arrived in my room there was a pint glass and a bottle of ale waiting for me courtesy of the lady who works at the guest house. For discreet purposes I won’t say what action I performed to make her so grateful, all  I’ll  say is I was happy to be of assistance.(Nudge-nudge, wink,wink, so no more…Eddy)
My alarm woke me up at 830 the next morning and although I felt as rough as a badgers, I tackled breakfast before heading off to the rail station,  having a last look through this lovely medieval cathedral city before catching the 1026 train to south Wales for my second matchday of the weekend in Newport.