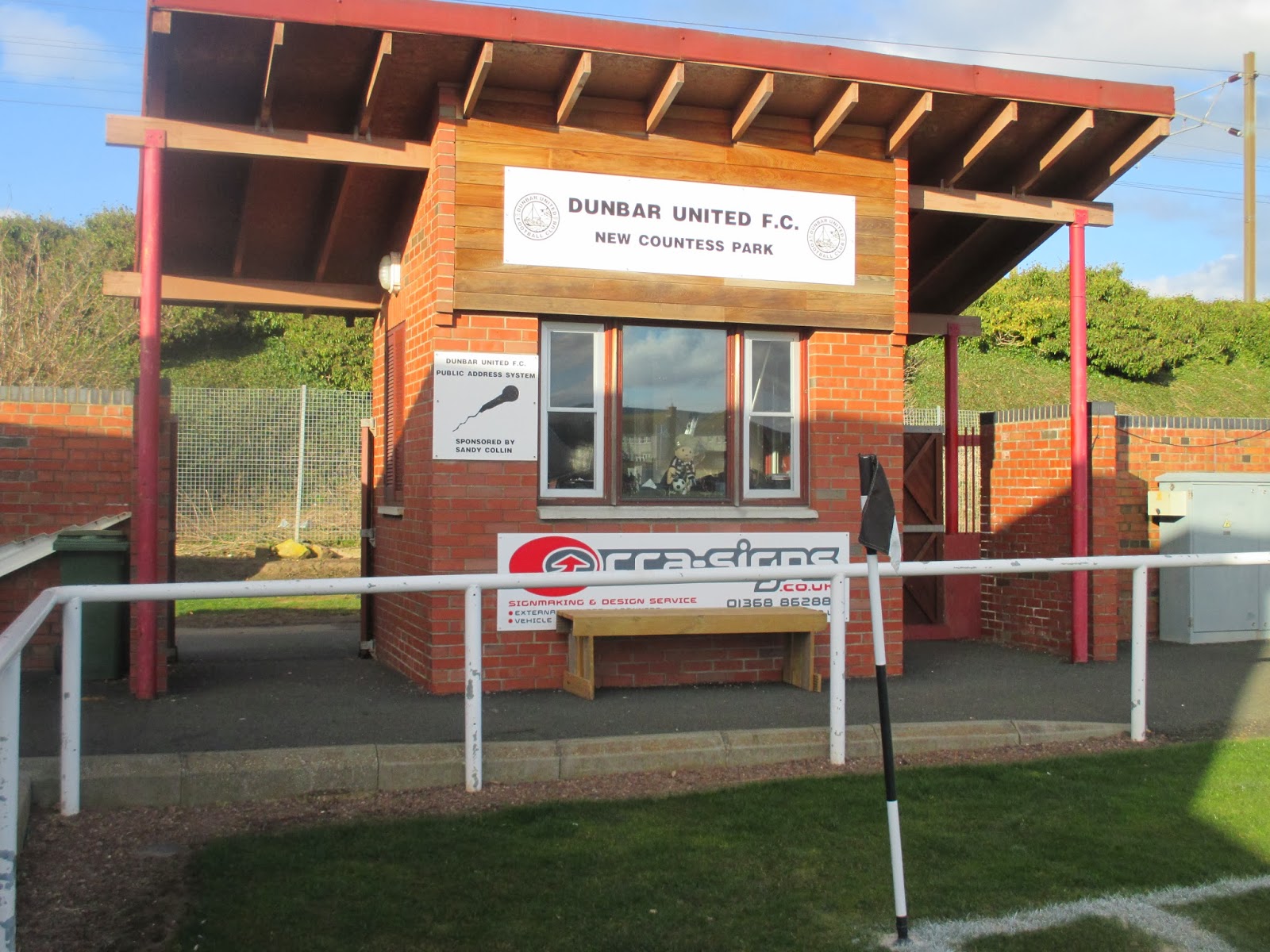 New Countess Park is the football ground I've seen the most without stopping to watch a game. The East Coast line runs by the home of Dunbar United, so I’ve past it many times on train journeys to a from Edinburgh. To rectify this misdemeanor I added The Seasiders to my list of  “T'do grounds” for this season and just to be awkward I didn't let the train take the strain, instead giving my new car Simon a run up the A1.

Dunbar is a town on the East Lothian coast, situated exactly at the halfway point between Edinburgh and the English Border at Berwick-upon-Tweed, being 28 miles each way. The former Royal Burgh takes its name from Brythonic roots; Dynn Barr and means 'summit-fort', which gives an indication to its origins and its history involving the castle situated over the harbour.
Scotland and England often contended for possession of the castle, which withstood many sieges, until the structure was slighted in 1568. The second Battle of Dunbar in 1650 was fought during the Wars of the Three Kingdoms between a Scottish Covenanter army and Cromwell’s English Parliamentarians. The Scots were routed, leading to the overthrow of the monarchy and the occupation of Scotland.
The town later flourished as an agricultural centre and fishing port despite turbulent times in the 17th and early 18th centuries. Dunbar gained a reputation as a holiday destination in the 19th century, as a seaside and golfing resort -  The 'bright and breezy burgh' famous for its 'bracing air'. Dunbar is also the birthplace of naturalist author John Muir and the home of the Belhaven Brewery since 1719. 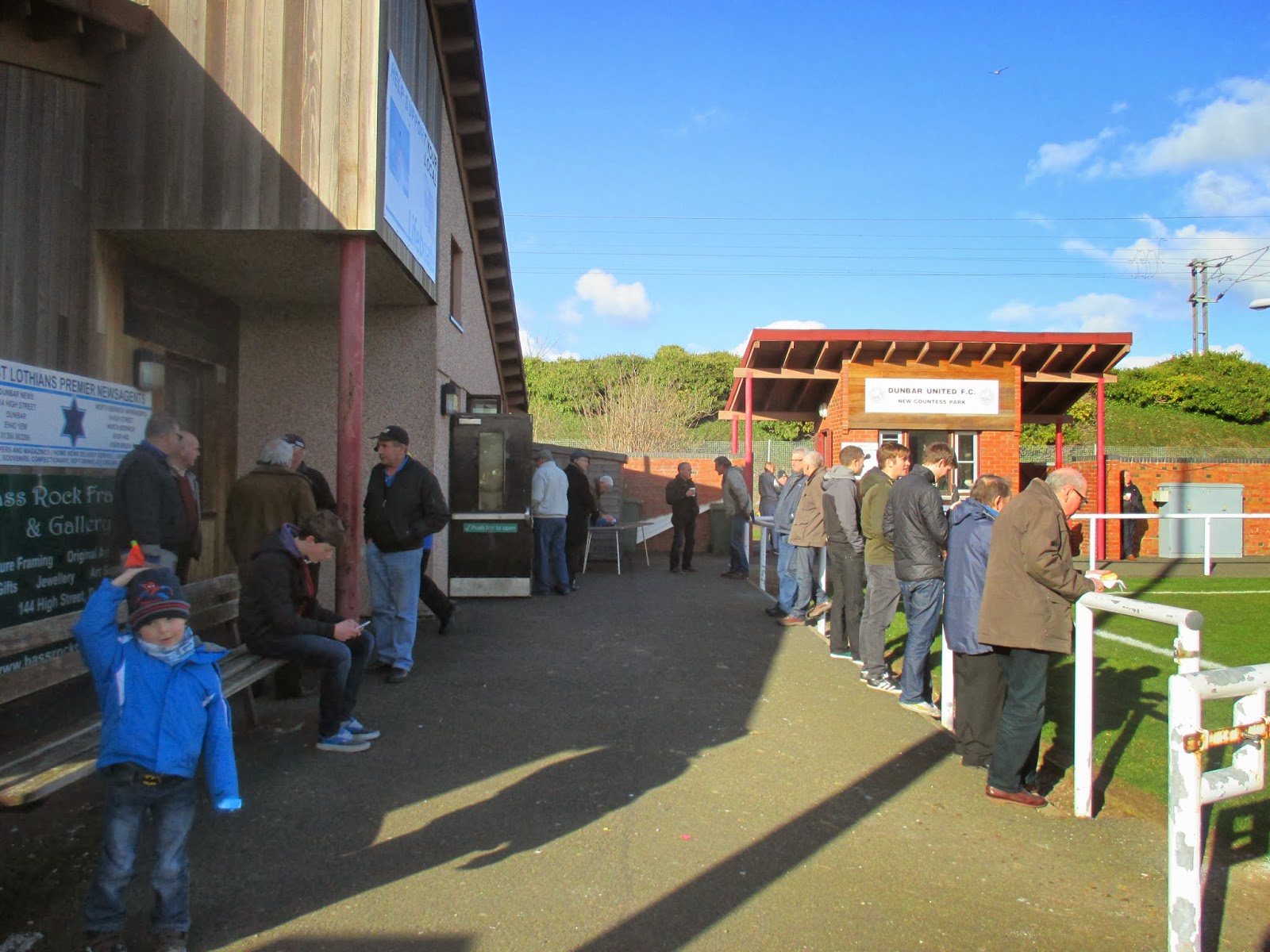 Dunbar United formed in 1925, winning their first honours in the Edinburgh & District League in 1927-28 and the East Lothian Cup the following season. The club also won the title again in 1961-62 and added more trophies in the East of Scotland Junior Cup in 1961 and 1964 and the Brown Cup in 1963.

The Seasiders greatest achievement came in 1961 when they won the top prize in Scottish Junior Football beating Cambuslang Rangers in the final of the Scottish Junior Cup at Hampden Park, but after the successful era of the 1960's the club had a lean spell without honours. In 1990 they lifted their third East of Scotland Junior Cup and won three East Region Division Two titles, the last of which in 1997-98. The last piece of silverware came in the Brown Cup in 1999-00 and the club currently play in East Region South Division. 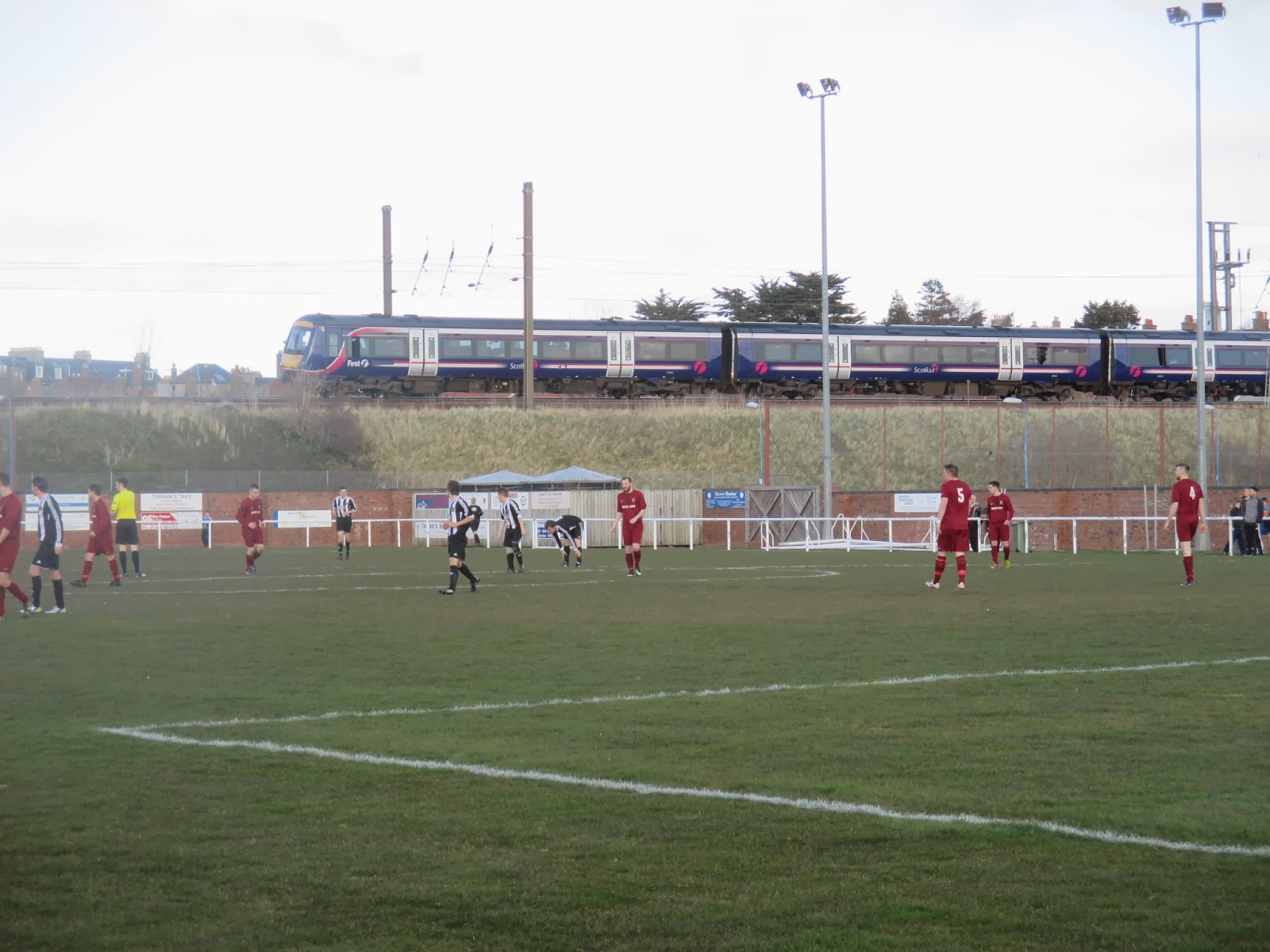 United moved to New Countess Park in 2001 which is a sports complex within Hallhill Healthy Living Centre. The ground is quite tidy, having a diminutive perimeter wall which separates the football from the rugby, with both sports sharing the large clubhouse found within the Living Centre.

There's room for about 2,500 spectators which is open on all sides apart from an overhanging roof at the main end, along from the changing rooms and refreshment bar. The paying entrance block is at the railway end, with perspex dugouts at the far side and eight floodlight pylons. 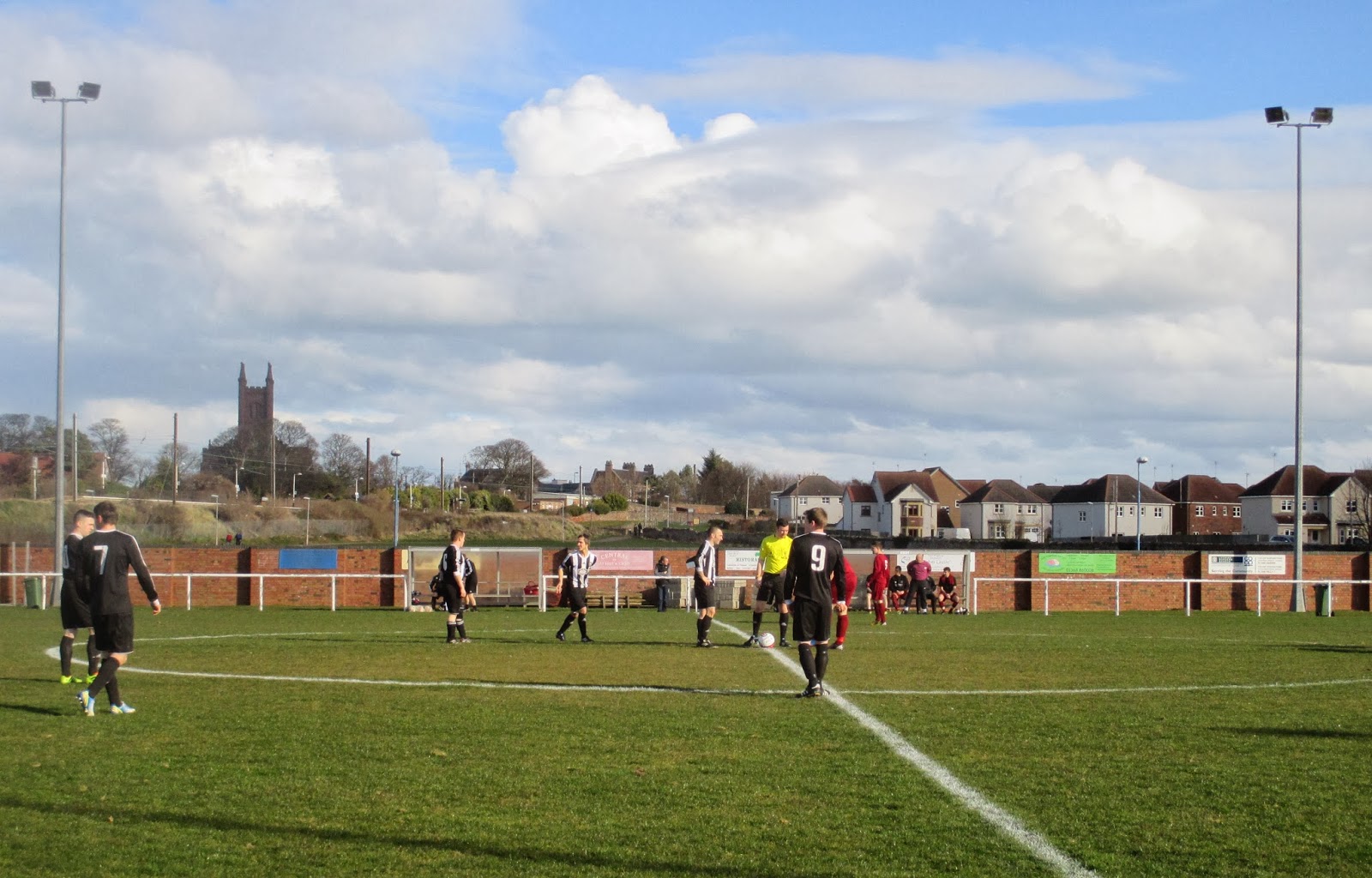 Dunbar were up against their neighbours from further west along the A1 (and a future tick) - Tranent Juniors The visitors withstood some early pressure before grabbing the lead, when a long ball found Bob Berry who produced a neat finish to chip the advancing keeper in the tenth minute. The Seasiders turned it around before half time, when a hard low cross was met by defender Richard Fairnie whose diving header flew past his own 'keeper, then Sam Young was on hand to give his team a well deserved lead.

The hosts had further chances to extend their one goal advantage but left it late to assure the three points. With a quarter of an hour remaining substitute Keith Tait finished off a good passing move to fire home a right foot shot into the corner of the net and with three minutes left Ross Colquhoun fouled Sam Young in the box, who stepped up and made no mistake from 12 yards to seal a convincing victory. 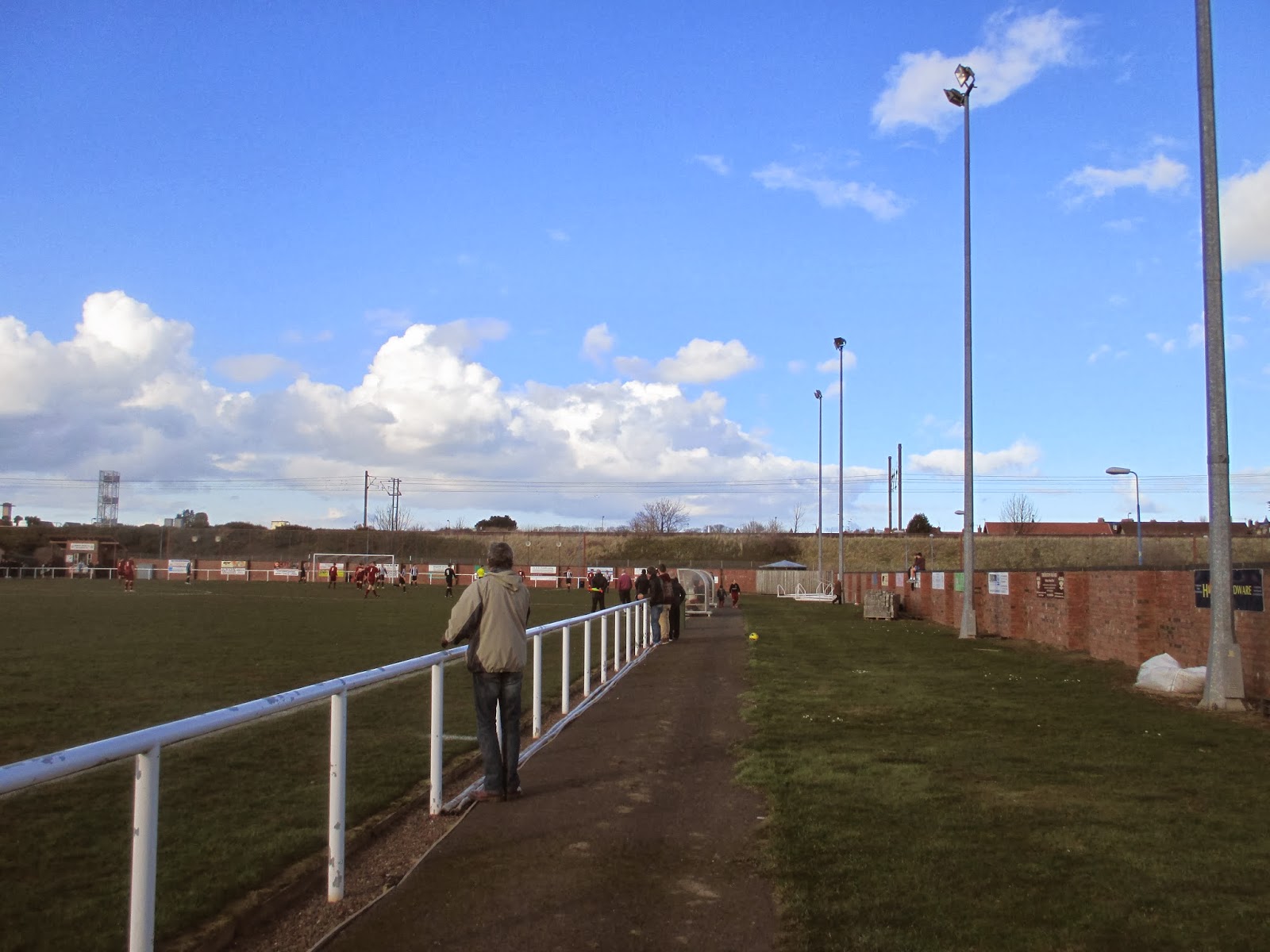 The journey up to Dunbar took an hour and three quarters (You were right Stevie Charla...Eddy) Those of you who might have read about my trip to Stamford at the end of January will remember “Wor Al” - that mackem tosser of a car I had, let me down big style, which resulted in a 40 mile tow home and me heavily out of pocket. Since then we’ve welcomed a new four wheeled member to the family, a bonny little Hyundai i20 named Simon. Today’s road trip was our ground bagging debut, which is hopefully the first of many enjoyable days out together of the coming years, including seeking more matches and new grounds just north of the border. 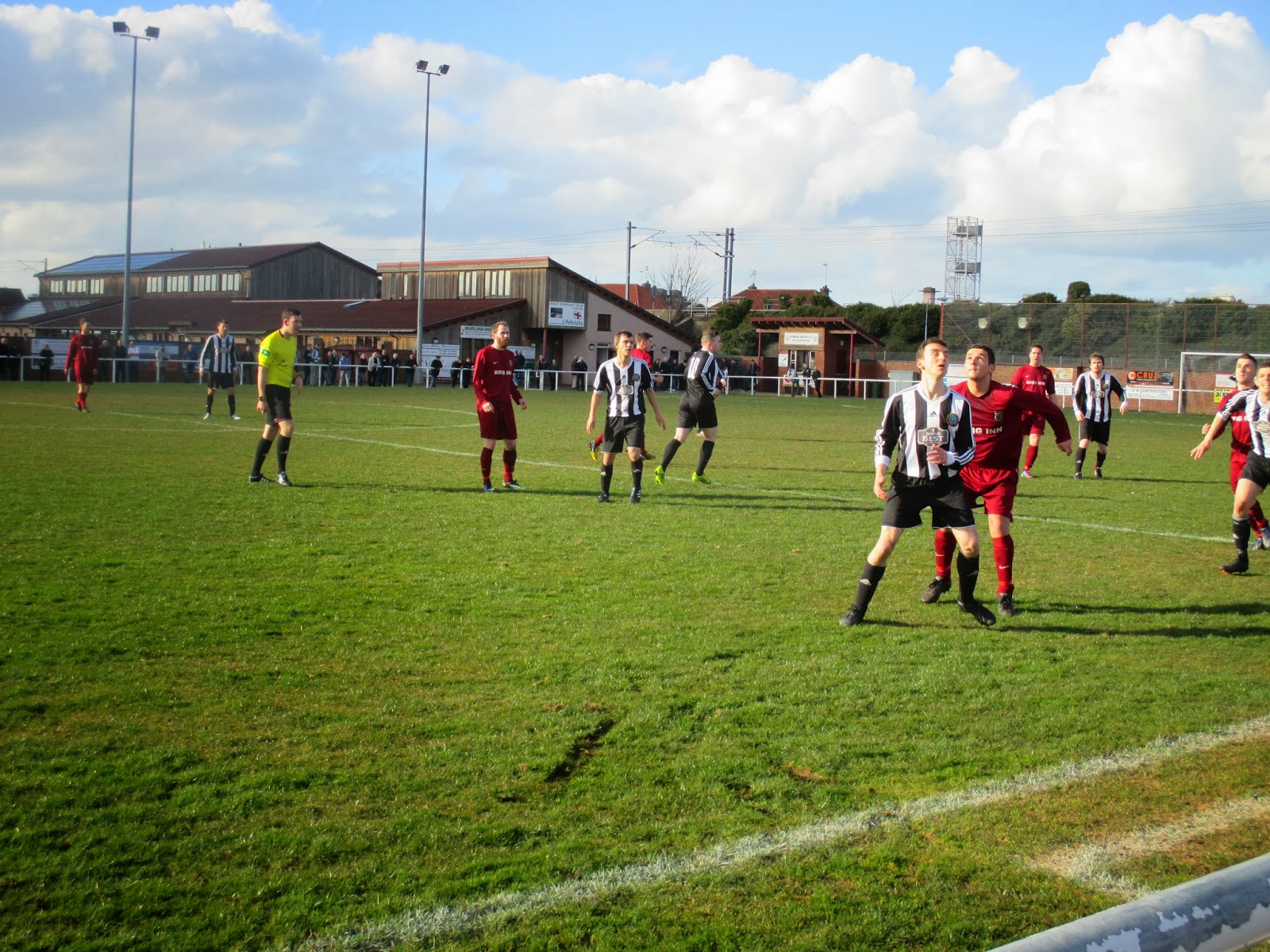 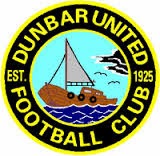