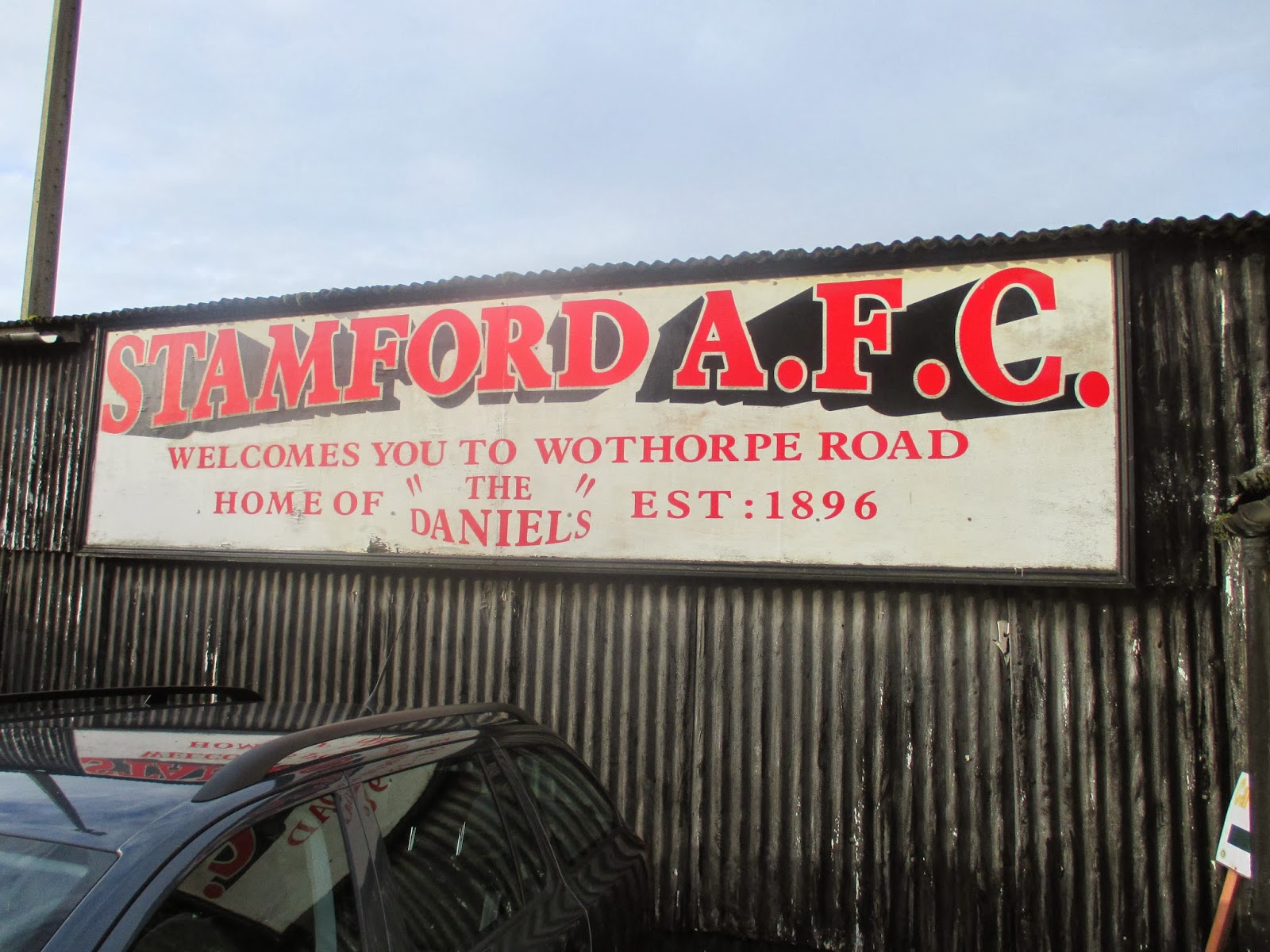 At the top of my “T’do” list this year, is a visit to Stamford’s Kettering Road ground before they relocate to a new £5m development on Ryhall Road at the end of the season. The club in a joint venture with Burghley House Preservation Trust and New College Stamford, will have matchday use of the new 1,500 capacity ground with the college students using the facilities during the rest of the week. Burghley House Preservation Trust has already been given outline permission to build 54 homes once the ground is demolished.

The club have played on Kettering Road since they were first established in 1896 after the amalgamation of the towns two leading teams - Stamford Town and Rutland Ironworks. Hansen’s Field(as it was then known and recognised with a special bottled ale) dates back to the 1870’s and boasts one of the country’s oldest main stands, built around the turn of the last century. The original wooden stand was upgraded with a con-iron roof and painted red with SAFC lettering on the front facade. The stand was later extended to accommodate standing and is now filled with about 250 red and blue flip seats with the changing rooms at the rear. The stand sits on the halfway line with the clubhouse which opened in 1975 next to it with the club shop cabin in the far corner. The team dugouts are on the opposite side with covered terracing running parallel with one half on the pitch.There’s open standing behind each goal and floodlights at the sides which were installed in 1981 after their FA Vase success.
The ground record attendance stands at 4,200 for an FA Cup 3rd Qualifying Round tie with Kettering Town in 1953 which ended in a 3-3 draw and as a mark of respect to Daniels fans I won’t mention what happened in the replay. 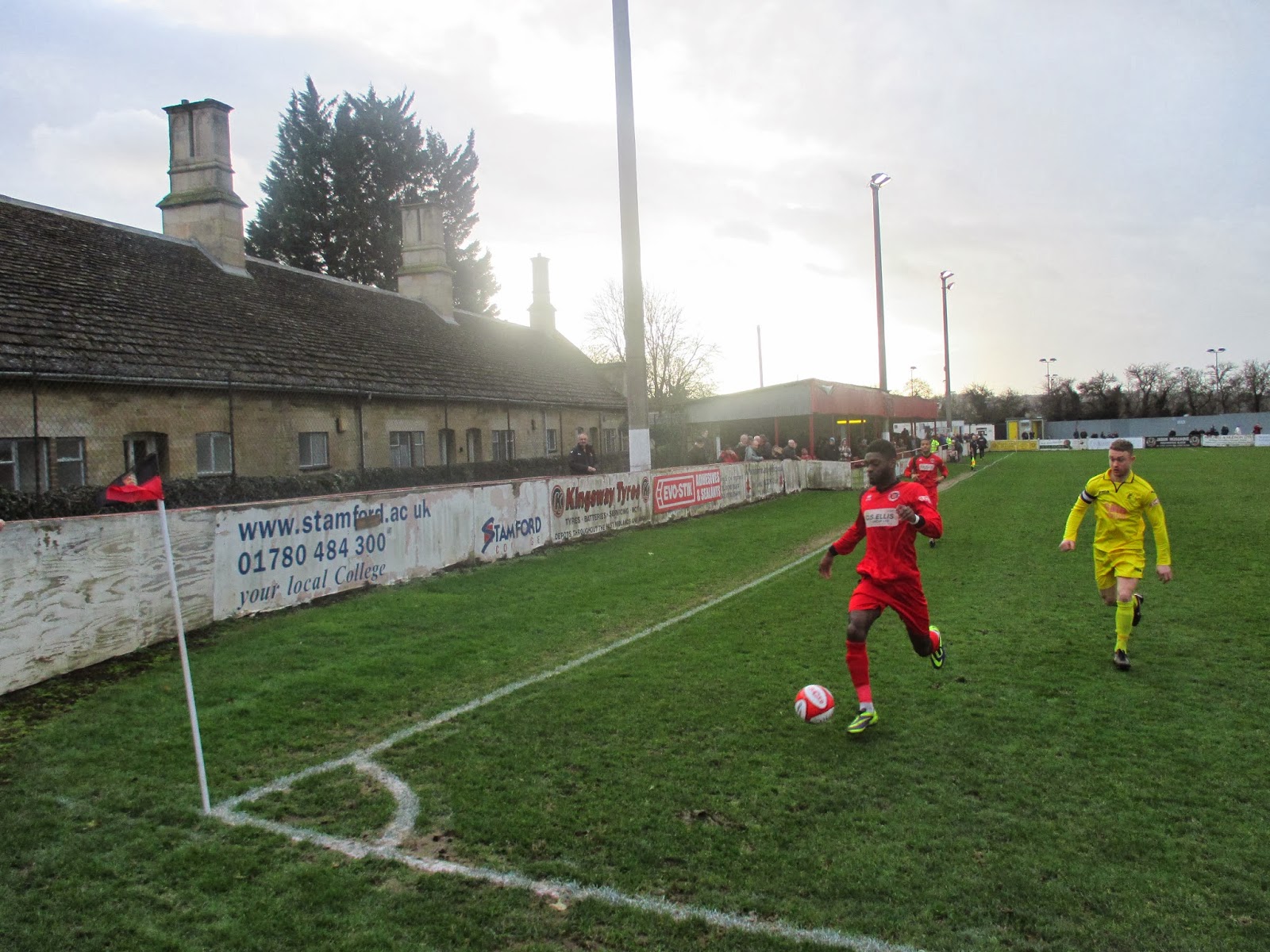 The ground is situated in the town centre next to the train station, so it’s surrounded by the splendour of Stamford’s five medieval church spires and core of mellow limestone buildings. The town and civil parish is found just off the A1 on the River Welland in the South Kesteven district of Lincolnshire and was proclaimed as “the finest stone town in England” by Sir Walter Scott. Stamford was the first to be declared a conservation area in 1967 and was rated the best place to live by a Sunday newspaper.

The Industrial Revolution largely left Stamford untouched, with much of town centre built in Jacobean or Georgian style throughout the 17th and 18th centuries, amongst which is the Arts Centre which is one of the oldest provincial theatres in the country, dating back to 1768. Amongst the town’s other delights is the 12th century ruins of St Leonard’s Priory, the Steam Brewery, Burghley House and the nearby Rutland water.

Stamford AFC are nicknamed ‘The Daniel’ after Daniel Lambert, the heaviest British man ever who died in the town in 1809, weighing in at over 52 stone. The ground is now named in his honour and his grave is in the churchyard at St Martin’s a few hundred yards from the ground. The ground has also been know as Wothorpe Road, which is the street which leads up to the ground from the town centre and the Vic Couzens Stadium named after the club president. 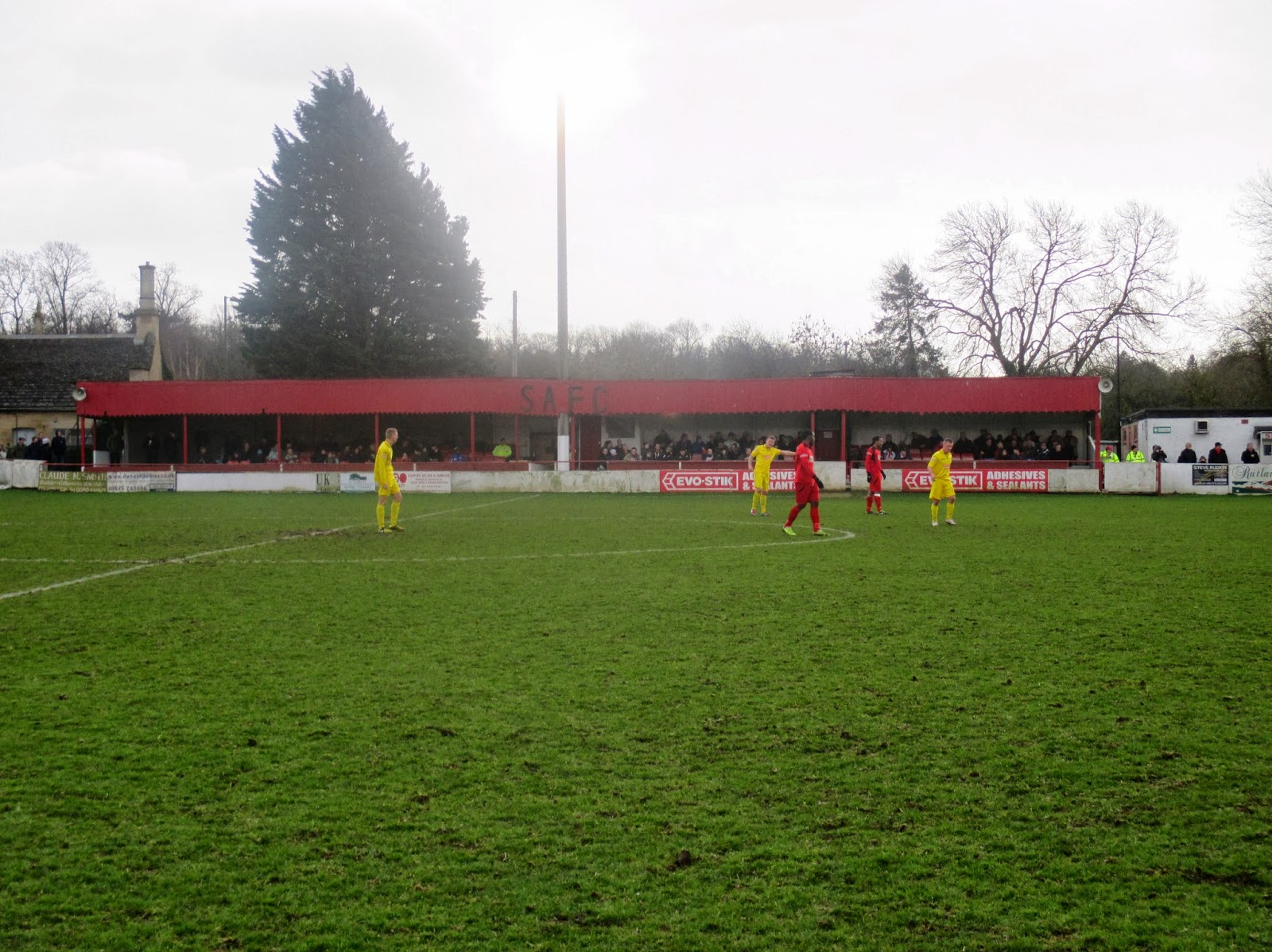 After formation the club spent a single season in the ill-fated East Midlands League, then after several years without playing competitive football they joined the Northamptonshire League in 1909, winning the title in 1911–12 season. The club spent the majority of their history in the United Counties League, apart from an unsuccessful spell in the Midland League during the 1960s and early 70s. When the club returned to the United Counties in 1972 they went on to win the title seven times, becoming champions for the first time in 1975-76 and a hat-trick of successive titles from 1980. After topping the table in 1996–97 and 1997–98 Stamford joined the Midland Division of the Southern League, then after the reconstruction of the pyramid in 2004 the club were placed in the league’s Premier Division.
The Daniels were relegated and promoted again before been classed as a northern club as they switched to the Northern Premier League.The club were relegated to the southern section in their debut season but returned this season after winning the play-offs with a 2-1 success over Chasetown.
The club have made three appearances at Wembley in the FA Vase, finishing runners up to Billericay Town in 1976 and Stansted in 1984 sandwiched in between lifted the trophy with a 2-0 success over Guisborough Town in 1980. 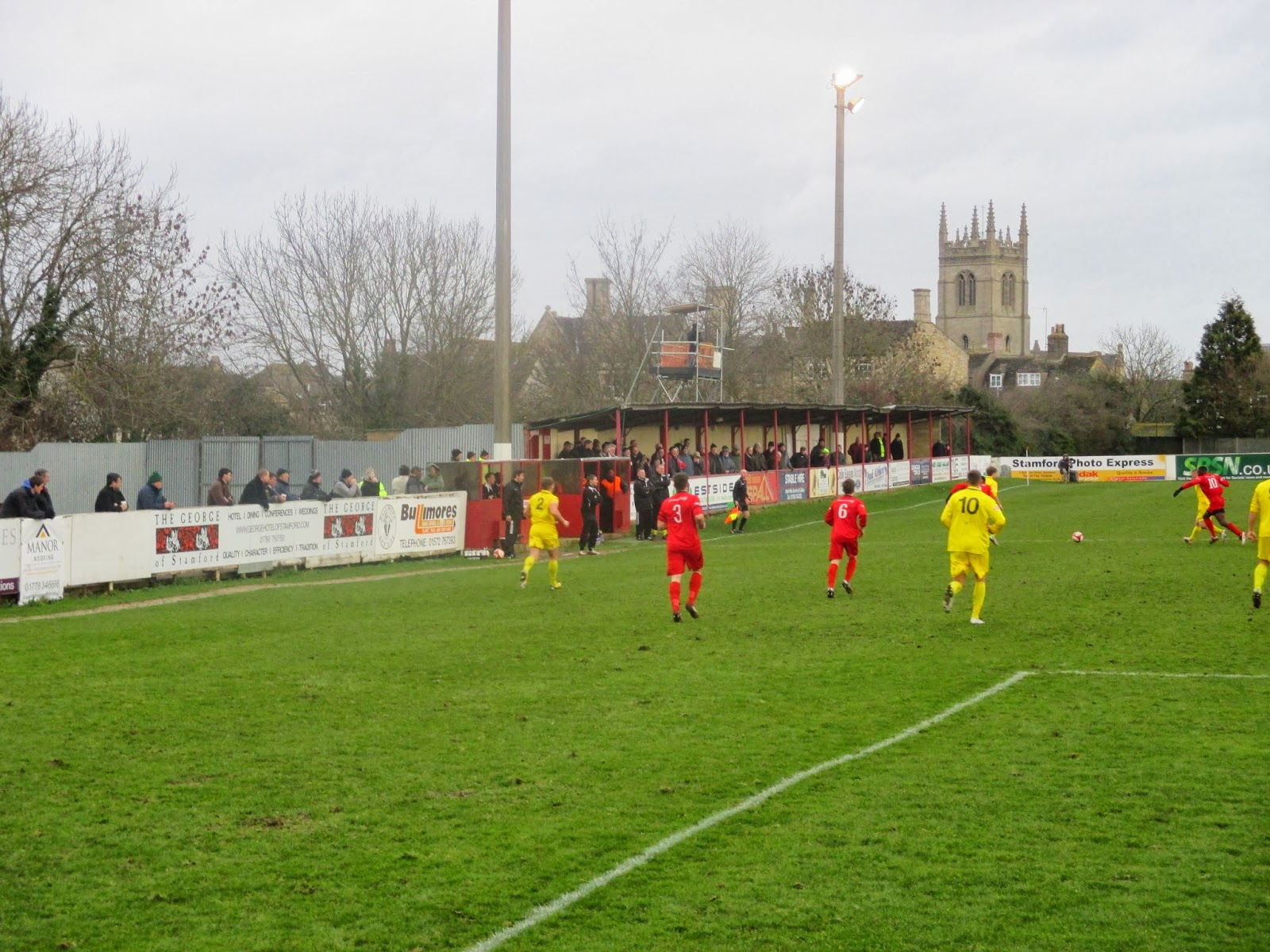 I stayed overnight in Grantham and my original plan was to drive down to Stamford at Saturday lunchtime, but this was instantly dismissed once I arranged to meet up with big Dave Twiddy and his lads. Dave is a major shareholder at the club and he's probably the most serious drinker that I know, so it was impossible to be in his company without having a few bevvys. With this in mind I was left with no option but to have a day on the lash, so Uncle Malc dropped me off at 1130 at Grantham 'Spoons(ticked off at last) before I caught the 1212 train to Peterborough to catch the onward connection to Stamford.
I arrived just after 1pm and had a look around the town centre before heading to the pubs. I usually prepare for my travels by looking in the Good Beer Guide for the best boozers but had to rely on the What Pub website instead. Amongst their recommendations is The Crown where I called in but walked straight back out as it was "a bit too well to do" for me, as I looked totally out of place being a scruffy Geordie wearing Doc Martins and an Austrian Army coat. I then called next door to The Periwig but again turned on my heels due to there limited choice of ales. It was third time lucky though at the All Saints Brewery which is a Samuel Smith's establishment, where I enjoyed a pint of Old Brewery Bitter priced at only £1.88. It's a cracking pub, decked out with memorabilia from the Tadcaster brewery and giving a nod to Stamford's Bull-running festival which took place from the 12th century for some 700 years. I also called into The London on my way to the ground where I arrived in the clubhouse just after 2pm.

It wasn't just the Twiddy family I was meeting but also one of the founder members of the 100FgC Squad - #4 Jack Warner who I met for the first time. Jack was residing down under in Perth when he joined the new website phenomenon back in 2006 and another 6 years past until he contacted me again. After a spell in Saudi Arabia he's now back living in Blighty, doing some serious groundhopping and had travelled over from his new home in Lowestoft with his girlfriend. The 100FgC roll call also included Squad #194 Keith Arthur plus Affiliated Member Paul Brockett and it was good to see them both. 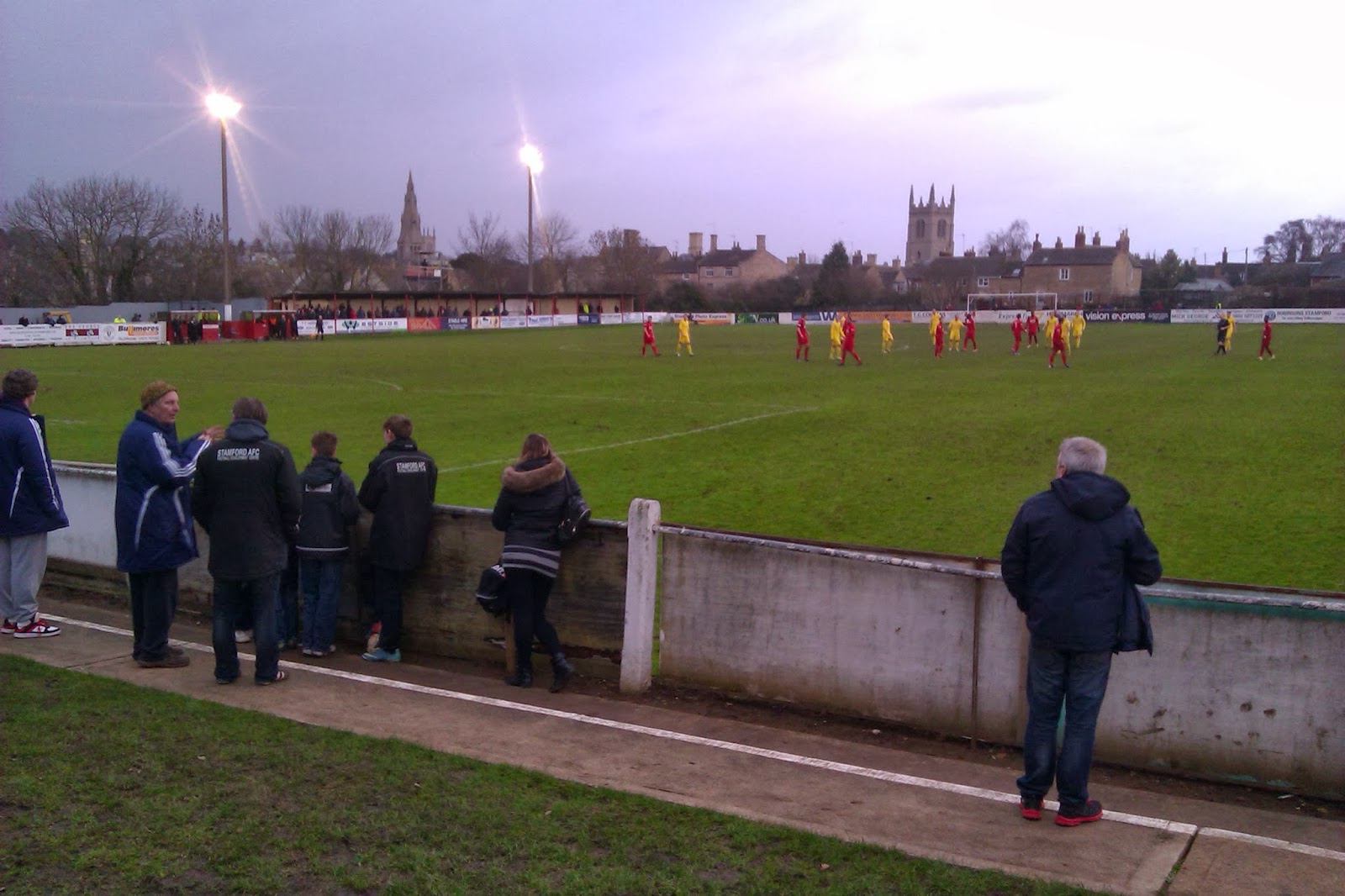 When I arrived in Stamford it was a bright sunny day, but as we approached kick off darkness descended with the pending threat of rainfall. I went outside just before kick off and spent the first 20 minutes of the game watching from all four sides as I did a photographic lap of the ground. I returned to the clubhouse to watch the match with Dave and the lads just as the lightning was becoming more frequent and just after the first big clap of thunder. Within minutes the slight drizzle turned to hailstones as the match officials and players scarpered to the dressing rooms followed by the spectators piling into the clubhouse. The match was halted as the referee and groundsmen inspected the damage before deciding to abandon the match due to the pitch being watch logged on one side and in the centre circle.
So with only 25 minutes gone that was the end of my football for the day, but I was compensated with plenty of good ale to be had with such good company in the clubhouse. I caught the 5pm train back to Peterborough with Keith an hour earlier than I planned, so I was back in Grantham and Auntie Ann's by six.

I had a terrific weekend and it was good to catch up with everyone in Lincolnshire, but of course the one drawback was not seeing 90 minutes of football. The abandoned matches that I've attended in the past haven't been recorded in my records as matches attended, but this time I'm going to make an exception to the rule.In the future if someone asks if I ever got to Stamford's old ground, then the honest answer is "yes" I paid admission, bought a programme, pin badge and seen a game, be it only just short of a third of a match. So with this in mind and as there's no opportunity of returning before they move, its therefore decided in true Its A Knockout style to play my joker on this one, so ground no.379 is Stamford AFC - Kettering Road.

Footnote
To put the gloss on this crazy weekend, as we were travelling home on Sunday afternoon there was a strange smell coming from the car engine.We had to stop off in Catterick on the way back and it was here outside the racecourse that the gearbox seized and we broke down.We eventually got home at 8.30pm courtesy of a toe off the RAC and me £149 lighter in the pocket. 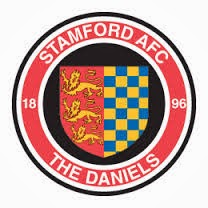 So a change of rules to get a tick.

Change of rules to suit eh ? I know you dont have to see 90 minutes to tick but please !!!

Yes.A one-off rule change, which I'll not do again.Joker has been played so it will always be a revisit if it happens again.

I want to give my special thanks to you; very first time I have got such type of blog that has described everything perfectly. hotels in Kettering