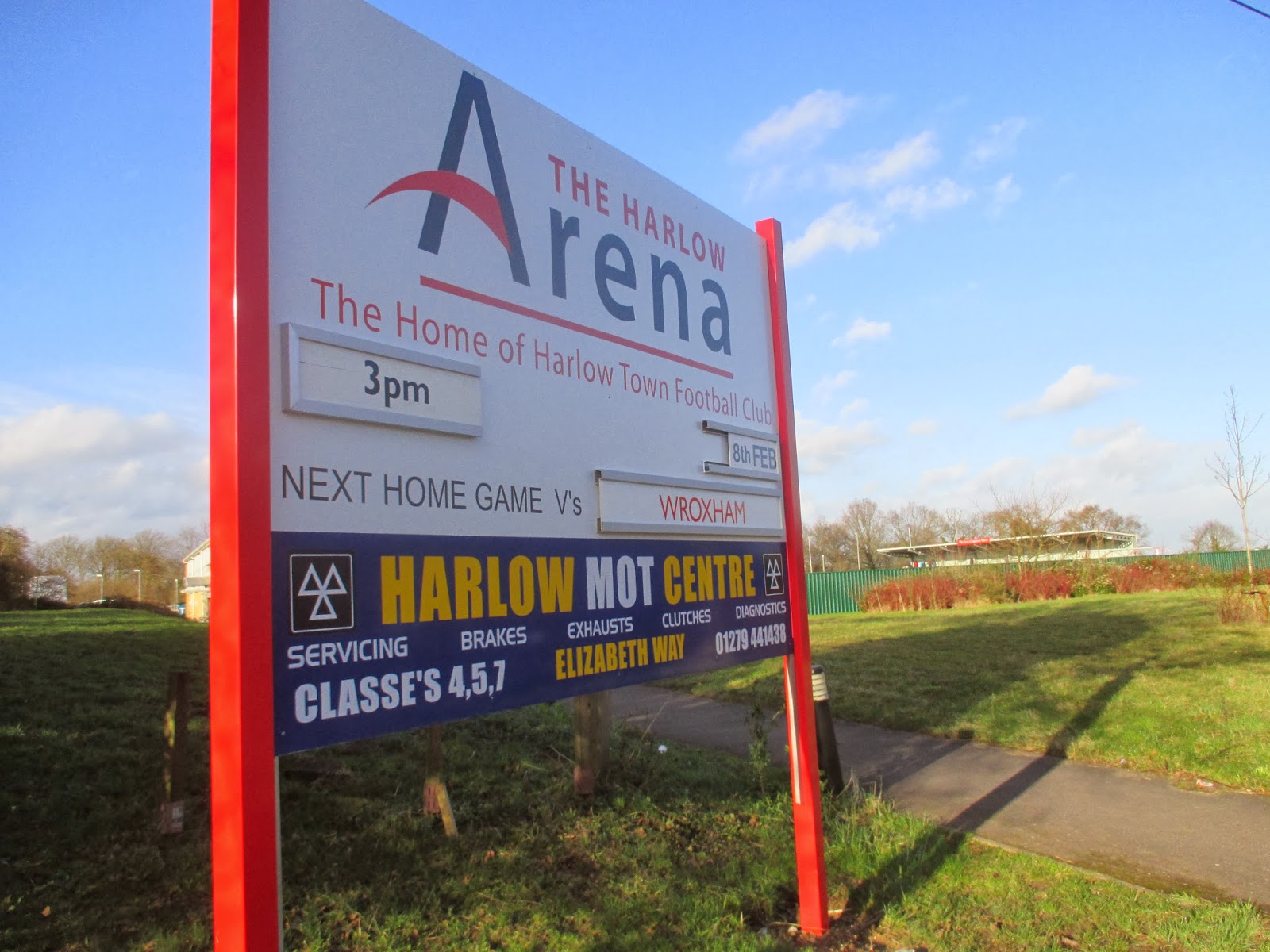 The Groundhoppers public enemy number 1 is the British climate, which is in the hands of our nemesis -  the Weather God. You always running the risk of pre-booked plans going tits up after a few days of heavy rainfall, this being the case today as Gateshead's Conference away fixture at Welling United fell foul to a waterlogged pitch. Thankfully the match was called off on Friday morning, which gave me enough time to workout alternative arrangements.
I had planned to meet up with Tom Salinger (Squad#96) at Wingate & Finchley, where I was to be giving the privilege of presenting the man of the match award, but this too was postponed. However I was confident that my Plan C was definitely a goer as Harlow Town have a new 3G pitch. The Weather God may be our foe but we have a friend in the third generation playing surface.

My newly drafted timetable went “off to a tee”. I arrived at Kings Cross at 1040, then after purchasing travel tickets, took the Victoria Line up to Highbury & Islington. I called into some cracking second hand record stores* on Essex Road and ticked off a couple of Wetherspoon pubs; The Angel and The White Swan, before taking the underground to Tottenham Hale. The train journey to Harlow Town takes around 20 minutes so I had plenty of time to alight at Waltham Cross for a 'Spoons lunch before  finally reaching my destination at 2pm.

* I could have spent hours in Haggling Vinyl and Flashback but was short of time, but I'll be back 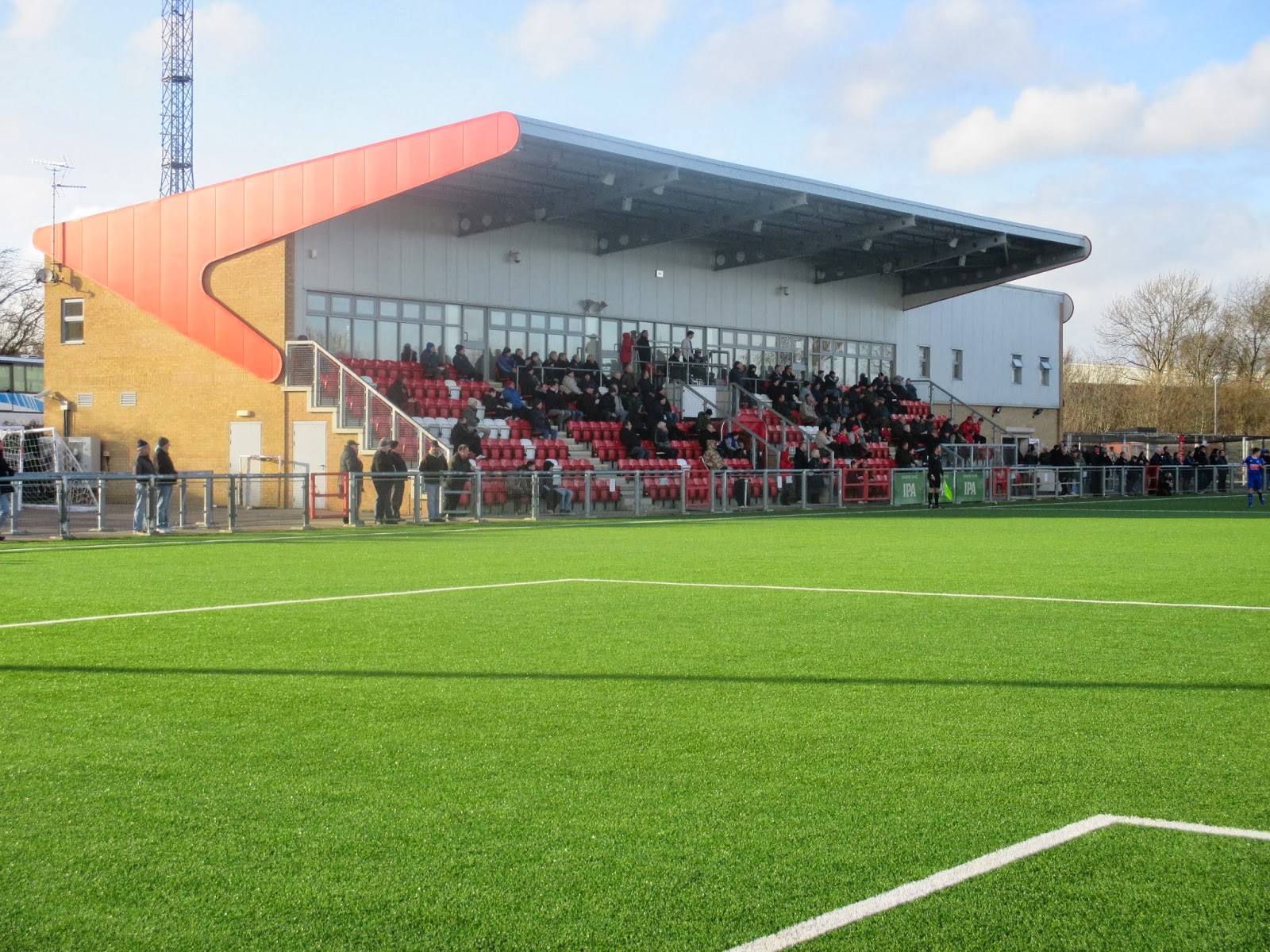 Harlow is a new town in Essex on the border with Hertfordshire in the Stort Valley, which is near the M11 motorway and only 16 miles from Stansted Airport, so it has good commuter access to London town and beyond.
The original village is mentioned in the Domesday Book as a typical rural community, around what is now known as Old Harlow, with many of its buildings still standing. The new town was part of the ‘Phase One’ development of new modern settlements built after World War II to ease overcrowding in and around London, due to the mass desolation caused by the bombing during the Blitz.
The Harlow plan was drawn up by Sir Frederick Gibberd in 1947, incorporated Old Harlow and the surrounding villages, each divided into neighbourhoods with their own shopping precincts, community facilities and boozer. Britain's first pedestrian precinct was built in Harlow, along with the first modern-style residential tower block - The Lawn constructed in 1951, which is now a Grade II listed building. The town centre plus many of its neighbourhood shopping facilities have undergone major redevelopment with the original buildings rebuilt to bring this “new town” into the 21st century. 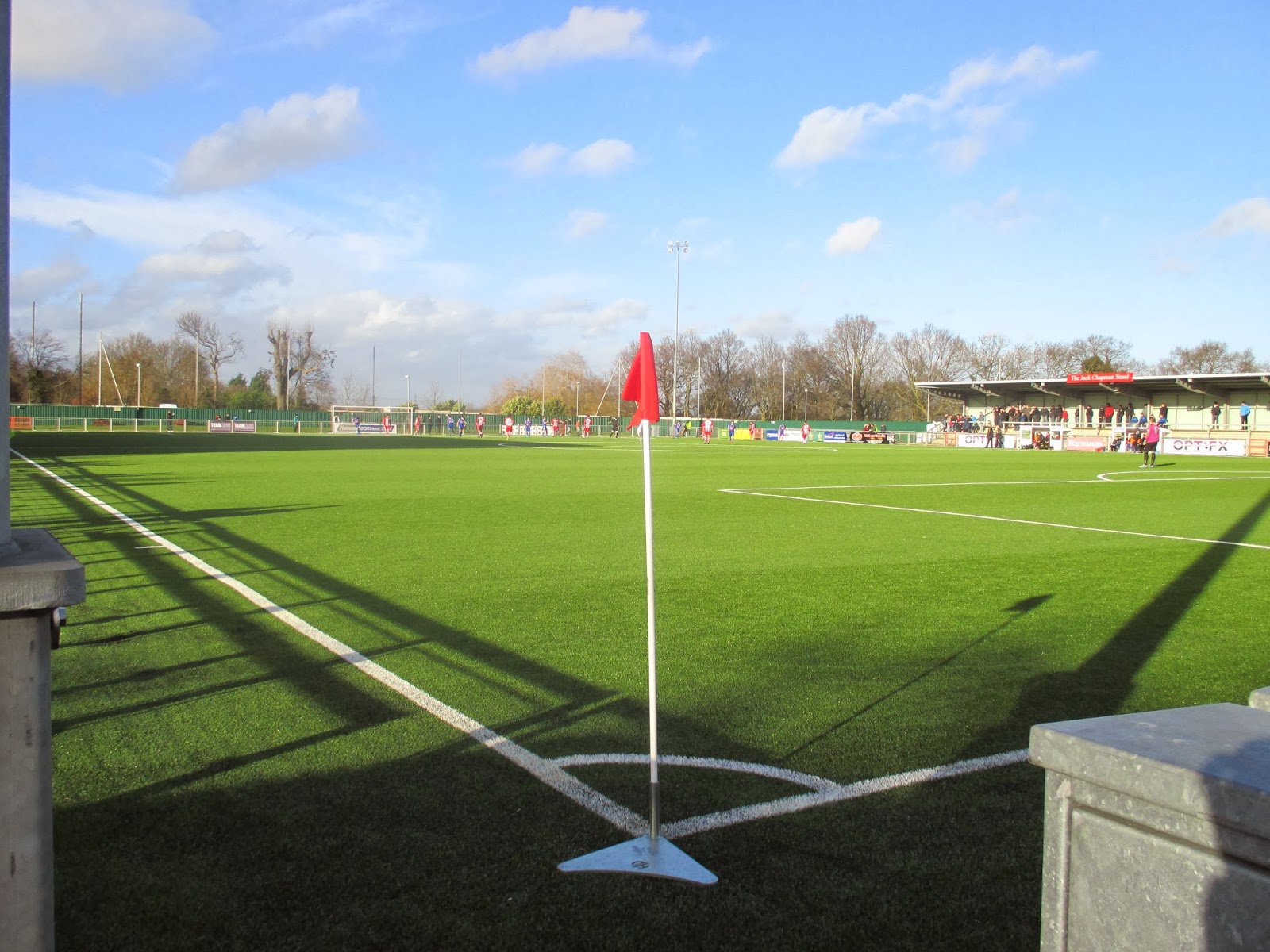 The club was formed in 1879 with their first match taking place on the 18th October against Saffron Walden. At the end of the century they briefly played in the East Herts League before merging with Netteswell and Burnt Mill in 1898. The renamed Harlow and Burnt Mill FC rejoined the East Herts League, but the brief marriage of the two clubs came to an end in 1902.
In 1907 they joined the new Stansted & District League, winning four league titles during the 1920s and also had a team in the East Herts League, where they added a further four championships during the same era.The club also appeared in the Herts & Essex Border League and the Spartan League until joining the Premier Division of the London League in 1954.
They switched to the ill fated Delphian League in 1961, then two years later were placed in Athenian League Division Two, winning promotion in 1963–64 and the Division One title in 1971-72. In 1973 they arrived in the Isthmian League where they’ve played ever since, apart from having to take a season out because of ground reasons in 1992-93, plus a brief spell in the Southern League between 2004 and 2006. 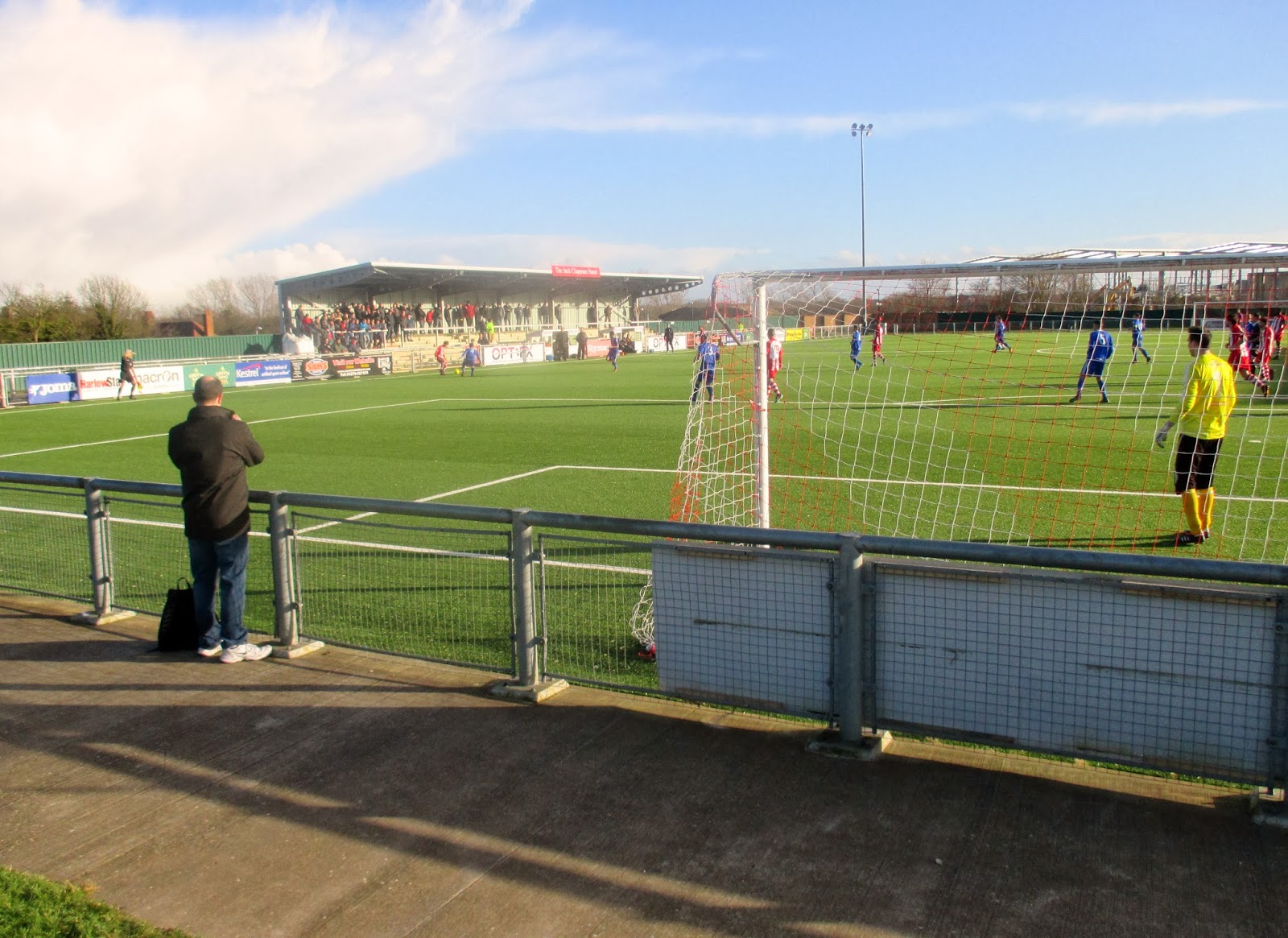 Barrows Farm is the club’s third ground, having played at Green Man Playing Fields until 1960, when they moved to Harlow Sportcentre, the first of its kind in England. The Sportcentre was the scene for The Hawks greatest moment in 1980 when having beating Southend United in the second round of the FA Cup, they were drawn away to Second Division leaders Leicester City in round three. Harlow grabbed a last minute equaliser at Filbert Street to take the Foxes back to Sportcentre, where in front of a record crowd of 9,723(including a young Simple Pieman..Eddy) they won the replay 1-0.

The Club moved a mile and a half to the west of their former home to the Pinnacles Industrial Estate in September 2006, playing their first senior match the following month in a Division 1 North fixture against Ware. The stadium is now known as Harlow Arena and is quite impressive when compared with some of the other new builds in recent times, especially the impressive carpet of a pitch. The main focus is the stand which houses all the amenities including changing rooms, club offices, refreshment bar, clubhouse and 500 red seats split into four sections, with the letters HTFC picked out in white. There’s also a function room at the top of the stand which overlooks the pitch towards the Jack Chapman Stand opposite. This covered terrace has standing room for 500 spectators and is the main gathering point for the young Town fans, who give good vocal support and encouragement throughout with their chants of “Aarlow Aarlow”
The team dugouts are in front of the terrace with hard standing and grass verges behind each goal. The 3,500 capacity stadium is finished off with tall thin floodlight pylons in each corner and there's also the nice touch of a kiddies 3G pitch next to the Main Stand. On a sunny, dry, but windy afternoon Harlow Town breezed past their Ryman League North opponents Wroxham with three second half goals. The Hawks bossed the game from the off, but had to remain patient, finally taking the lead five minutes after the restart, when a right wing cross was nodded back into the path of debutant David Laird to pick his spot from 12 yards. The hosts doubled their lead within ten minutes when Alex Reed was on hand to fire home and he grabbed his brace late on with probably the easiest goal he'll ever score, George Smith setting up the striker to knock the ball into the net inches from the goal line. Overall an easy but professional afternoons work from the Essex outfit and another three points keeps them in the promotion picture.

On arrival in Harlow I walked from the train station along Fifth and Fourth avenues, which is a canny hike just to tick off another public house. However this was nothing compared with the slog along the same road to the football ground, having to walk at postman speed instead of a leisurely wander which I would have preferred as I was carrying a belly full of beer.
At the ground I bumped into ace football ground photographer David Bauckham, who graciously offered me a lift to the station afterwards, so this allowed plenty of time to get back to Kings Cross for the 1900 back to Newcastle.
Although I was initially disappointed with the Welling match being postponed things turned out great in the end, having a really smashing day out, going to a ground and a part of outer London that I wouldn’t have visited otherwise. On the downside though,  yet again the completion of the top 116 clubs will again elude me for yet another season, but deep down I knew that this was the probable outcome, as our old enemy the Weather God defeats this Groundhopper yet again.

Simple Pieman's visit in November 2006 and memories of Harlow Town. 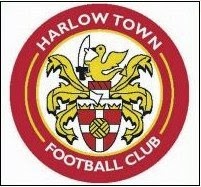 Glad you enjoyed your visit,if I had bumped into you I would have dropped you off at the station.