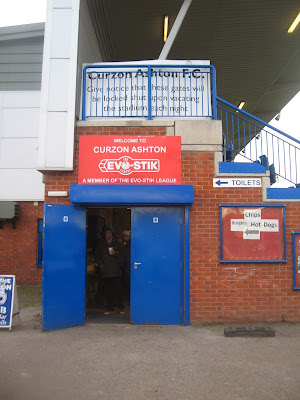 It’s been a few years since I’ve had a day out in Manchester, so I booked train tickets a few months ago, but without any idea what my football destination was. That decision was made just last weekend, when I decided that after a few pub and record store visits in Manc I would head across to Ashton-Under-Lyne and visit the Tameside Stadium, the  home of Curzon Ashton.

Ashton-under-Lyne is a market town in the Metropolitan Borough of Tameside in Greater Manchester. The town lies on the north bank of the River Tame at the foothills of the Pennines, situated just over six miles from Manchester city centre.
Ashton was once considered "bare, wet, and almost worthless” until the introduction of the cotton trade in the 18th century. The town grew in prominence during the Industrial Revolution and by the mid-19th century became an important mill town at a convergence of newly constructed canals and railways, plus the transport network allowed for an economic boom, which led to the granting of honorific borough status in 1847. Ashton’s heavy industries declined during the mid-20th century but the town has continued to thrive as a centre of commerce, and is "considered the hub of Tameside” 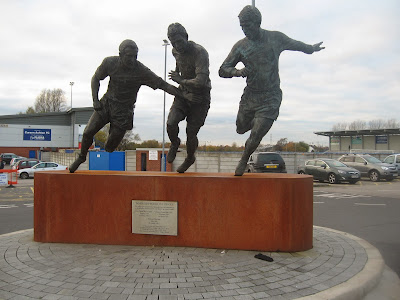 Curzon Ashton was formed in 1963 after the merger of Curzon Road F.C. and Ashton Amateurs F.C. originally known in their early years  as Curzon Amateurs. The club are nicknamed The Nash in reference to their former home National Park.
Curzon originally played in the Manchester League before becoming founder members of the Cheshire League Division Two in 1978. They won promotion in their debut season and the following year they navigated through six rounds of the FA Vase before losing out in the semi-finals to Stamford. They lost both legs 2–0 with the home tie played in front of a record home attendance of 1826 at National Park.
Curzon became founder members of both the North West Counties League First Division in 1983-84 and the First Division of the Northern Premier League when the Non-League pyramid was reshuffled in 1988. The club returned to the NWCL in 1998 after playing a single season in the North Counties East League, winning promotion from Division Two in 1999-2000.
Their debut season at the Tameside Stadium was a memorable one, amassing 99 points in the 2006-07 title race, finishing runners-up to FC United of Manchester and promotion to the Northern Premier League First Division North. They also reached the semi-finals of the FA Vase, but again missed out on a trip to Wembley, this time they were denied by Truro City, winning the first leg at home 1-0 but lost out 3-2 on aggregate.
Since winning promotion The Nash have consistently finished in the top five, but on each occasion have failed to win further promotion via the play-offs.In the 2008–09 season they reached the first round proper of the FA Cup for the first time where they defeated League Two side Exeter City 3–2, before losing 2–0 away to Conference National side Kidderminster Harriers in round two. 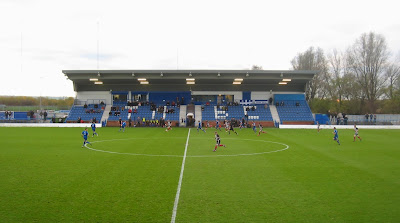 Curzon Ashton moved to the Tameside Stadium for the start of season 2005/06, the ground formally opened by Sir Alex Ferguson before a game against a Manchester United XI on the 8th September.
On the approach to the stadium there’s a statue commemorating three local football legends – Denton born Jimmy Armfield with World Cup winner Geoff Hurst and 2006 Italian World Cup star Simone Perottta, who were both born in Ashton.
The main stand holds 527 blue seats with TMBC picked out in white lettering (that’s the coonsill..Eddy) with the changing rooms and clubhouse underneath. The club shop is housed in a storage container near the turnstiles, which stocks a good range of programmes and souvenirs. On the opposite side is a large covered terrace which shelters 1100 and the rest of the ground is made up of built up terracing, behind the goals and at the wings of each stand. Overall a smart looking stadium, which has a current capacity of 4,000. 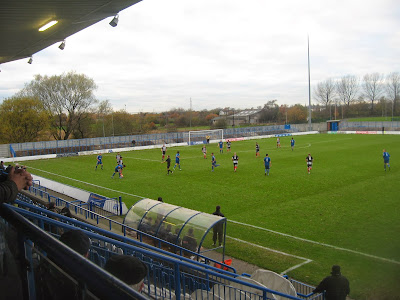 Second placed Curzon Ashton were up against Kendal Town for the first time in a league fixture since 1997, when they were still called Netherfield.
Although I was attending the game as a neutral I always favour a team wearing black and white shirts, plus I lived in a street with the word Kendal in its name on and off for 30 years, so today I favoured the Cumbrians.
The visitors made a positive start and took the lead on 27 minutes when Rob Wilson fired in at the far post. The game turned on its head early in the second half when Danny McGahon was harshly shown a second yellow card and the hosts took advantage of the extra man with a three goal burst in a four minute spell from the 70th minute.
Matty Warburton got on the end of a right wing cross to slide in and score followed by a neat turn and shot from Ryan Brooke to fire Curzon ahead. From the restart Ryan Watson was on hand to make it 3-1 and the points were bagged. Kendal were awarded a penalty deep into injury time when Zak Brown was fouled by Ashton ‘keeper Anthony Thompson. From the resulting spot-kick he got down well to save Wilson’s effort to round off a fine victory for The Nash. 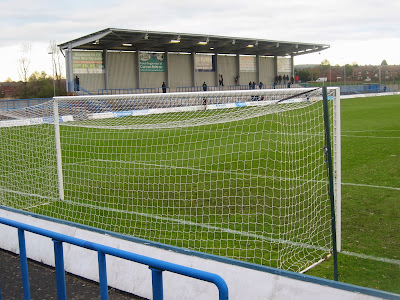 This matchday had all the ingredients of a good and somewhat typical day out, that my dozen or so regular readers will be familiar with. I arrived in Manchester at 1050am and after some record store shopping, I went for a few bevvys. I arranged to meet up with 100FgC Squad #187 Alan Oliver (aka The Casual Hopper) for the first time and although he’s now on the wagon he was good enough to take me around the city’s ‘Spoons pubs, of which I was confused by which ones I had previously ticked off. Alan was also good enough to pay for a taxi to Ashton where on arrival we alighted at The Ash Tree JDW boozer for a quick drink before heading to the match.

Alan is currently doing the FA Cup through all 14 rounds which started at the extra-preliminary stage at West Didsbury & Chorlton in August all the way to Wembley in May, all in aid of The Christie Charity, which raises funds to help provide additional services and undertake vital research for cancer patients.
If you would like to show your support and sponsor Alan in his FA Cup quest then please visit his blog  http://thecasualhopper.co.uk/ where you can make a donation to a great cause. 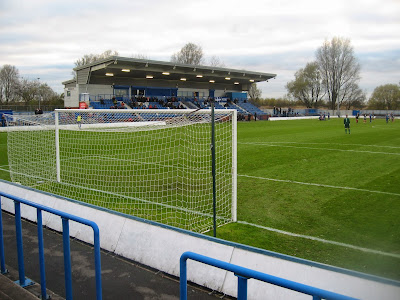 After the match I thanked Alan for a cracking day and heading to the train station, where  there were no trains running just a bus replacement service. My plan was to just head to Stalybridge for a few pints and catch my train to York from there, instead of returning to Manchester. The man in the hi-vis jacket showed me what bus to get for the 10 minute journey but fifteen minutes later I still hadn’t reached my required destination, then when I saw the splendour of the Ethiad Stadium I knew a f**kin' blunder had occurred. Worse was to come when the bus by-passed Piccadilly and in heavy traffic with time running out, headed towards Victoria Station. I asked the driver to let me off the bus, but he stubbornly refused and told me to get the Metro back to Piccadilly. To cut a long story short I missed the Metro by seconds and ran up to Piccadilly making the 1811 train to Scarborough with 3 minutes to spare.
Funnily enough me and Alan were discussing running around chasing trains earlier, this is something I’m used to but when you’re in an unfamiliar city and have a belly full of beer its bloody hard work! So an enjoyable, action packed day and I  look forward to returning the city that has so much to answer for and meeting up with Squad #187 - The Casual Hopper sometime in the not too distant future. 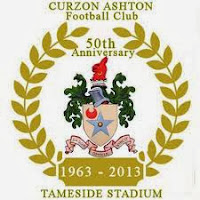