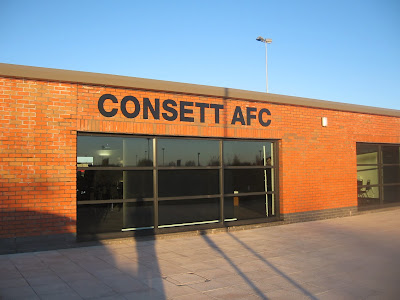 One-hundred-and-ninety-one days since Newcastle United provided the opposition for Consett’s very last game at Belle Vue, the Toon have returned for the grand opening of The Steelmens new ground in the Crookhall area of the town, which forms part of Durham County Council’s regeneration of Consett.
The development has saw the demolition of the club’s former ground, as well as replacing Belle Vue Sports Centre and Consett Baths with a £3m community based sports complex. I’ve featured Consett a couple of times on the blog but haven’t gave the club the full Google caboodle, so here you are.. 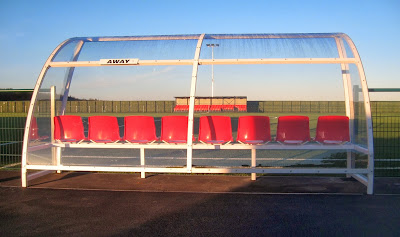 Consett is a town in the northwest of County Durham, about 14 miles southwest of Newcastle upon Tyne, which sits high on the edge of the Pennines.The town is perched on the steep eastern bank of the River Derwent with the town centre being around 885 feet above sea level, therefore making it one of the highest towns in the country. Although I live 14 miles away from the town, my own home is 500 feet above sea level in Sheriff Hill, which is the highest point in the Gateshead borough, so I can clearly see Consett and in particular the nearby Pontop Pike transmitter from my bedroom window.

Consett was a basic village in 1841 with 145 residents before becoming a boom town, as it sits on top of coking coal and blackband iron ore, and along with nearby limestone, had the three essential ingredients needed for blast furnaces to produce iron and steel. The Derwent Valley was the cradle of the British steel industry  helped by the easy availability of coal from Tyneside and the import of high quality iron ore from Sweden via the port of the Tyne. However, following the invention of the Bessemer process in the 19th century, steel could be made from British iron ore, so the Derwent Valley's geographical advantage was lost to South Yorkshire as Sheffield became the leading centre of the British steel industry.
The closure of the steel works in 1980 marked the end of the Derwent Valley steel heritage, and along with the closure of coal mines, it was also a first step in the decline of all heavy industry in the area, reaching an unemployment peak of 36% in in 1981. 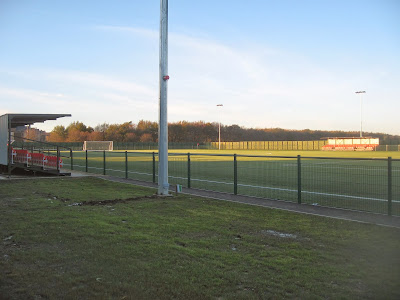 Consett AFC was formed in 1899 as Consett Celtic and played local football until joining the Northern Alliance in 1919. The club switched to the North Eastern League in 1926 winning promotion from the Second Division in their debut season before going on to win the top division in 1939-40. When the league was disbanded in 1958 they moved onto the Midland League, then became founder members of the Northern Counties League in 1960, winning the title in 1962. In that same year they returned to the reformed North Eastern League which again ceased after only two years. The Steelmen joined the Wearside League, twice finishing runners-up and winning a couple of pots before joining the Northern League in 1970.
The club have finished league runners-up in 1976-77 and 2007-08 and have won the Second Division on two occasions in 1988-89 and 2005-06. They’ve also lifted the Northern League Cup in 1995 as well as winning the Durham Challenge Cup six times. 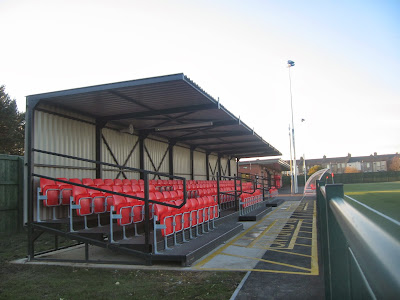 Like minded football ground enthusiasts will be disappointed with this new venue, for starters I thought that the powers that be would come up with a more original name than Belle Vue Stadium, but the club felt it was only too right to honour the old ground.
There are two seated stands, one to the right hand side of the dugouts at the entrance end and the other sitting on the halfway line at the far side. Both are the regularly seen meccanno type stands,  filled with red flip seats. The changing rooms/clubhouse block are to the left of the dugouts and the rest of the ground is open. The best and most important feature is the 3G pitch, as Consett is notorious for being the first place in the north-east for snowfall and freezing temperatures, so there shouldn’t be any problems getting a match on now, just as long as they’ve got some big shovels! 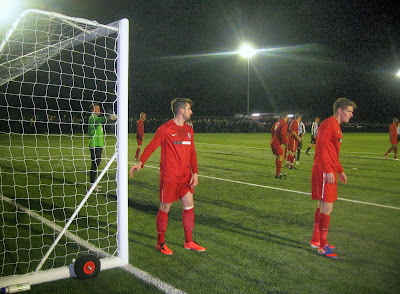 In preparation for the game I called up to Consett earlier in the week to take some daylight photographs and on match night I set off early in anticipation of a big crowd. Upon my arrival at 7.20pm there was already a healthy queue and by the time I reached the turnstile fifteen minutes later, it had snaked out of the car park towards Delves Lane. Club Chairman Frank Bell appeared outside from the warmth of the clubhouse and reassured everyone that the match wouldn’t start until everyone was inside, so Consett born referee Mark Clattenburg eventually got proceedings underway at ten past eight.

In true Consett fashion the shiny new pitch already had a frost coating and there was the distinct Derwent Valley chill in the air. Prior to kick off the stadium was officially opened by the Vice-Chairman of Durham County Council John Robinson and Peter Beardsley, the Toon legend put on his boots and wore the number 10 shirt as a guest player for the evening.
I would have loved to see Peter score the very first goal at the Belle Vue Stadium, however that honour went to another Geordie as Adam Campbell fired United ahead on the half hour mark.

Newcastle made several substitutions at the break including two old warhorses from the Everton team of the ‘80s, now on the NUFC staff – Kevin Richardson and Dave Watson, the big centre half breezed through the game and hardly broke sweat.
On 56 minutes Consett equalised when substitute Luke Sullivan knocked in a right wing cross, but United snatched it late on when County Durham-born defender Jamie Cobain header home a near post header from a corner kick.

A fantastic evening and great reward for everyone connected with Consett AFC who have worked so hard in making this happen. The Belle View Stadium might not win any architectural awards but this won’t bother anyone at the club, as the whole point of the move is to benefit the community and built on a successful youth set up. The club run a large junior section covering all ages and have just announced a link with the Newcastle United Football Foundation, so things are looking bright and certainly heading in the right direction for The Steelmen. 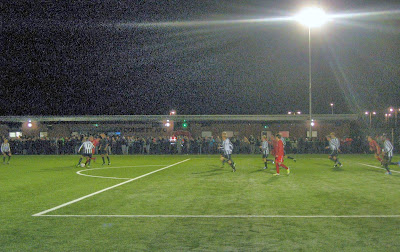 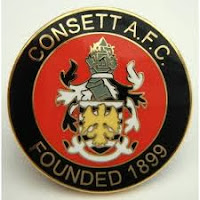 Interesting write-up. Thanks for posting. As you say, the ground is very dull from a groundhoppers point of view [and I'm not in a rush to visit] but will serve the community well.

Absolutely fantastic ground. A lot of hard work has gone into it. Very proud to call it my club.