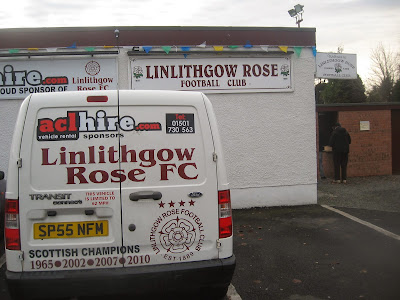 You know what grinds my gears and really boils my urine?  Its people posting links on social media sites about severe weather warnings of  snow over the forthcoming winter months. Snow in winter - imagine that!..whatever next? Gifts at christmas….Valentines cards in February...daffodils in spring?  Anyways the reason for this wee rant is before we head into hibernation and the south of England comes to a grinding halt, I just needed the apocalyptic snowfall to hold off until December so I could have one last trip to Scotland in 2013.

Over the last few years, this weekend in the calendar has been a regular trip north of the border, so before my mid-season train travel break, I was again off to Edinburgh before heading 20 miles west to the Royal Burgh of Linlithgow in West Lothian.
The town is famous for its loch and Linlithgow Palace, the home of the Stuart kings. After a disastrous fire in 1424 destroyed most of the town, the present palace was build by James I of Scotland and became the birthplace of James V and Mary Queen of Scots. In January 1746 troops of the duke of Cumberland's army marched out of the palace leaving fires burning which soon caught hold of the building and burnt it out, and ever since the palace has remained unroofed and uninhabited.
Another tourist attraction next to the Palace is St. Michael's Church, one of the largest burgh churches in Scotland The 15th century building is named after Linlithgow’s patron saint; the town motto is  "St Michael is kind to strangers". 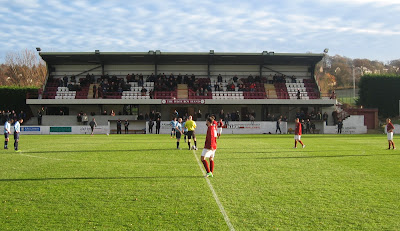 Linlithgow Rose formed in 1889 and are one of the most successful junior clubs in the East Region of Scotland. The club have won the prestigious Scottish Junior Cup four times in 1965, 2002, 2007 and 2010 and also finished runners-up in 1974, 2003 and against last season, losing the final 1-0 to Auchinleck Talbot at Livingston.
Linlithgow’s originally played at Captains Park, winning their first trophy in the Forth League in 1902, followed by more honours in the County Cup and St Michaels Cup while playing at this ground.
Just before the First World War they moved to Upper Mains Park, winning the Lumley Cup in 1914. The reformation of the Junior set up in 1924-25 placed Rose in the West Lothian Junior League and the club comfortably won the championship in their debut season.
Another move a few hundred yards down the road to Lower Main Park in 1930, coincided with the clubs  leanest spell with no honours won throughout that decade. After the Second World War the club looked for a new ground, eventually purchasing land adjacent to the Glue Works in 1947 which they named Preston Park. The ground was renamed Prestonfield two years later and it’s been their home ever since with the ground’s record attendance of 3,626, recorded for a game against Petershill in the late '60s.
Rose were Edinburgh League winners in four consecutive years from 1965 and were dominant in the East Region League, lifting their first of nine Division One championships in 1974-75.
Linlithgow Rose are the current East Super League champions, winning the title for a third time following success in 2004 and 2007. They are also the holders of the Fife & Lothians Cup which was won for the fifteenth time. Their excessive trophy haul also includes 14 East of Scotland Cup’s, 10 East League Cup wins, a dozen successes in the St Michael’s Cup and lifting the Brown Cup on eight occasions. 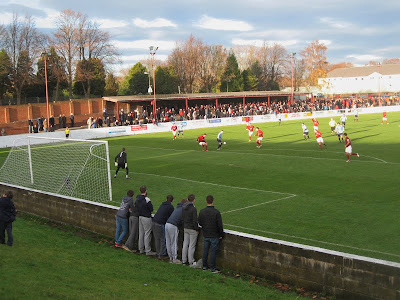 Prestonfield is probably the best Scottish Junior ground I’ve visited so far.The ground is dominated by the eye catching Davy Roy Stand, which sits proudly on the half way line. The stand has elevated seating with staircase access at the sides, with standing room, dugouts, club offices and changing facilities underneath. There’s a seating capacity of 301 made up of maroon and white flip seats under a cantilever roof.
There are two turnstile entrances, one in the car park next to the Linlithgow Rose Social Club and the other at the top end of the ground.In between the two entrances are ten steps of terracing which runs full length with a covered centre paddock. The refreshment bar is at the back of the terrace and serves a great selection of savouries, including the delightful curry pie which is now a serious contender for this years ‘Scabby-eye of the Year’ award. There’s grass banking at the top goal and behind the nearside goal is five steps of terracing which continues around towards the main stand.The current maximum capacity is 3,500. 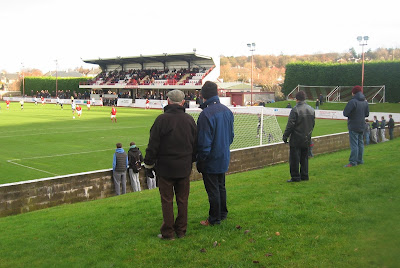 The 3rd round of the Scottish Junior Cup paired the Rosey Posey with the 2012 winners Shotts Bonn Accord. The hosts went into the game as favourites to progress but it was The Bonny who won for the first time at Prestonfield since 1962. There was a good crowd for the game including a decent away support and amongst the home fans was one man who has to be the loudest bloke in my 40 years of attending football matches.This Rose supporter constantly shouted instructions throughout the game, every kick, every tackle, every decision, he made Neil Warnock sound like a shy little schoolboy. He even got a mentioned by one of the Rose players in the new club magazine ‘The Gallant’ and it comes as no surprise that he is nicknamed “Coach”

Shotts were the better side in a tight first half and should have took an early lead when a Chris Walker header struck the crossbar.However they gained the advantage five minutes before half time, when McKenna robbed the defender and found Andy Cross who was left unmarked and finished well with just the goalkeeper to beat.
Rose worked hard to draw level but the Shotts defence held firm and added to their lead just minutes after a Smith effort hit the crossbar which denied Rose an equaliser. A long ball found McKenna who stayed onside, before finding McStay who played the ball out to Cross who fired in his second goal with a left foot shot.
With time running out substitute Gordon Herd halved the deficit, firing home after a goalmouth scramble but the chance of a replay was never likely as Shotts seen out the final ten minutes and deservedly booked their place in the fourth round of the Junior Cup. 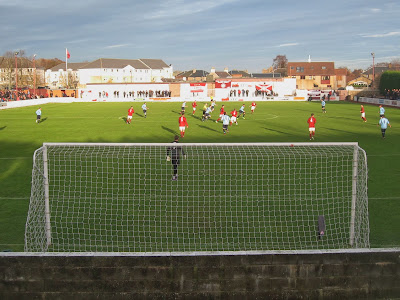 I arrived in Linlithgow just before noon after catching the first available connection from Edinburgh. As I was still feeling slightly rough from being on the lash the previous night, I took a stroll down the High Street, along the loch and up to the palace. Once the cobwebs had blown off I still had enough time for a couple of pints before the 1.45pm kick off, calling at the GBG listed Platform 3 and The Four Marys. I really enjoyed my afternoon in Linlithgow. It’s a smashing little town, steeped in history with some cracking pubs, plus of course it has a traditional football club with a ground to be proud of. After the game I had a couple of hours to kill in Edinburgh before catching the 1830 back to Newcastle, so I thumbed through some records in Vinyl Villains and watched the first half of the Toon match in the pub.

This is my last train trip of the year and I was pleased to get to tick off Linlithgow Rose before the savage winter arrives. According to the media scaremongers we’ll all be suffering cabin fever and having to make the daytime dilemma between eating or heating, but if I’m honest I couldn’t care less, let it snow, let it snow, let it snow, just as long as it f**ks off in time for my next matchday train journey on the 8th February.

on December 01, 2013
Email ThisBlogThis!Share to TwitterShare to FacebookShare to Pinterest
Labels: Linlithgow Rose, Shotts Bon Accord

What a lovely ground. A little surprise by the attendance too.