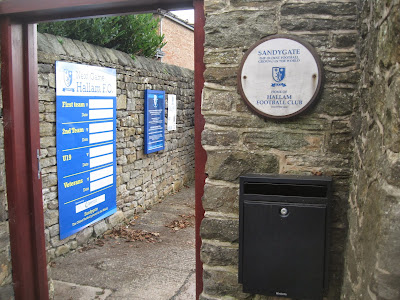 If you’ve arrived on this website it’s more than likely you found this post via a search engine. (Nobody’s going to read this gubbins by choice ...Eddy) So if you’ve Googled - Hallam FC or Sandygate Road, then surely you’d have prior knowledge that the club is the second oldest FC in the world and their ground is recognised by the Guinness Book of Records as the oldest ground on the planet. If you didn’t know this fact then shame on you - but at least you’ve learned something to impress your mates with in the pub.

Hallam Football Club founded in 1860, three years after city neighbours Sheffield FC. The two clubs first met in the ‘Rules derby’ on Boxing Day in that year, which obviously holds another world record, as the oldest still contested derby clash in football. In 1867 the club made history in winning the Youdan Cup(named after a local football enthusiast and theatre owner Thomas Youdan) the world's first ever organised football tournament when they beat fellow Sheffield club Norfolk in the final at Bramall Lane. Hallam won the trophy outright in 1871, but the pot had been lost for many years until it turned at a Scottish antique dealers shop in 1997. The club bought the silverware back which allowed the club to obtain authenticity from the Guinness Book of Records of owning the oldest football ground and trophy. 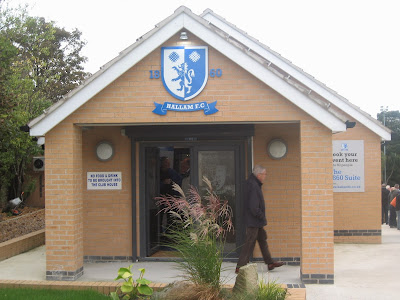 The club formed out of the Hallam Cricket Club which was founded in 1804 and went onto play within the amateur ranks in local league and cup competitions, as well as the FA Amateur Cup which included knocking out Bishop Auckland in 1925.
In 1952 they joined the Yorkshire League Division Two, finishing runner-up in 1956-57 and champions in 1960-61 and continued in Division One until the league was disbanded in 1982. They became founder members and continue to ply their trade in the North Counties East League, currently in its First Division after relegation two years ago, following 17 consecutive seasons in the Premier Division. Hallam have won the Sheffield Senior Cup four times during the 1950s and 1960s and won their first silverware in 36 years in winning the NCEL League Cup in 2003.
Apart from the history lesson there’s another couple of interesting facts about Hallam F.C. that you should know. They were the club Jimmy Muir (Sean Bean) played for when Sheffield United signed him in the film When Saturday Comes and the club president is none other than Alan Shearer’s best mate and former Premier League referee Uriah Rennie. 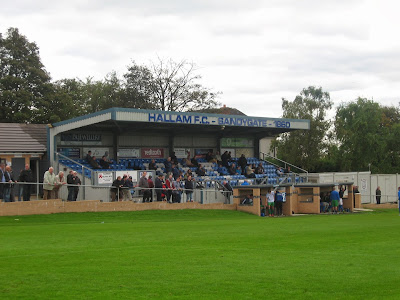 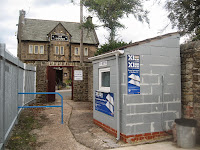 Sandygate was owned by the landlord of the pub across the road - The Plough Inn also doubling up as the team changing rooms. The ground was altered in 1865 so the football pitch was moved away from the cricket square and by the end of the century Sandygate hosted rugby plus the annual Hallam Sports event which attracted five figure crowds.
The Plough Inn was demolished in 1929 and rebuilt the following year with a meeting room for the clubs and an increase in ground rent of £18 per season. Due to a lack of matchday takings at the pub, the facilities were let out to other clubs such as Crookes WMC and St Phillips CI, as Hallam became homeless but remained affiliated to the local FA.

Hallam were allowed to return after the war, sharing with occupants Fullwood FC until 1951, when they again became the sole tenants. The club obtained a proper lease from the owners Tennants Brewery on the agreement of a grandstand to be built, which was completed in 1954. The Plough Inn still served as changing rooms until 1956 when a wooden structure was built, this was followed by new fencing and dugouts and the decade ended with a record attendance of 2,000 for an FA Amateur Cup clash with Hendon.


The ground continued to progress with a new club pavilion built and opened in April 1964 before a match with Sheffield Wednesday. The club’s stability and the long term future of the ground was secured with only seven years of the original lease remaining. Hallam secured a 99 year lease extension at a sum of £50,000 mainly thanks to a massive fundraising effort, plus the club received a large bequest from a late supporters will. Ground improvement demands from the NCEL saw a total revamp with a stand, cover and four corner floodlights, which were first switched on in November 1992 in a 4-3 win over Frickley in the Sheffield Senior Cup.

The stand sits on the halfway line with staircase access gained behind the dugouts. There are 250 blue and white flip seats with the stand nicely finished off with Hallam FC – Sandygate – 1860 on the façade in bold capital letters. The required cover is at the top goal, covering a section between the corner flag and the goalpost. The other two sides are open with the far side fenced off from the cricket pitch, where I was collared and stopped from walking along, so was unable to take any pictures from this angle.
The two new stands were completed for the 1999–2000 season and also new changing rooms were built behind the stand, with the original changing facilities gutted and refitted as the 1860 Suite. There is also a remembrance garden in between the pay booth and the clubhouse.

I arrived in Sheffield at 1020 and got up to my usual tricks. I scooped four JDW’Spoons pubs, where all the ale I consumed was brilliantly priced at just £1.80 and amongst those beers supped was a five star pint of Grafton ‘Apricot Jungle(4.8%) in The Swim Inn on Glossop Road.
I found a cracking retro clothes shop called Freshmans, where I could have spent a fortune if I wasn’t low on cash, although I did find a canny record shop – Vinyl Demand where I picked up a rare LP by The Adverts and a Wreckless Eric single.

The four hours in the city centre soon flew by, so when it came to match time I caught the 51 bus to Sandygate. The ground is in Crosspool in western Sheffield, located 2.5 miles from the city centre. The suburb is in an elevated position above the Porter and Rivelin valleys, situated on the A57 Manchester Road.
Historically Hallamshire is the historical name for an area of South Yorkshire in the city of Sheffield in the area of the foothills of the Peak District and southwest of the River Don. The region includes much of western Sheffield, and in Anglo-Saxon times was the most southerly shire of the Kingdom of Northumbria, also its southern border with Mercia may have Celtic origins. The Domesday Book states that the manor of "Hallun" included sixteen hamlets or settlements which had existed before the 1066 Norman conquest of England.

I boarded the bus and tried to confirm with the driver that the bus went to Sandygate Road. He either wasn’t sure or couldn’t understand a word I said, but when I mentioned Hallam FC he nodded and said “That’s £1.80”  Once the bus past into Crosspool and turned into the bottom of Sandygate Road, I got up and asked if this was my stop, he confirmed it was in a quite mumble sort of way. Of course it wasn’t, there was another two stops, the second of those was just outside the ground. To make matters worse two ladies pulled up in a car to ask directions to the ground. I told them that this was Sandygate Road so it must be on this street, they thanked me and drove off, not risking offering me a lift. I know that you should never give a lift to a stranger, but I wasn’t exactly dressed with a cloak and dagger and sporting a Jason Voorhees hockey mask!
Once I got to the top of the bank and the Plough Inn came into view then I knew I had arrived at the oldest footy ground in the world. The first thing I noticed was the close proximity of the pub to the ground, no wonder it was used for dressing rooms for so long. I gave the lady at the pay booth a fiver for admission and a quid for a programme I then noticed the canny slope which ran from top to bottom goal, if it’s not the steepest pitch I’ve seen then it most surely be in my Top 2.

The Countrymen came back from an early setback against Hemsworth Miners Welfare to grab the points with two second half goals. The visitors took the lead in the ninth minute when a direct free kick from the edge of the box rattled the crossbar and bounced on the goal line, before number nine Ryan Pleasants ran in to nod in from inches out.
Hallam struggled to make any clear cut chances but equalised five minutes after the restart. A great piece of skill from Scott Ruthven saw him outweigh the defender before cutting inside and releasing a fierce shot from the edge of the box, giving the goalkeeper no chance. The winner came just after the hour mark when a ball over the top saw Jake Bradbury stay onside and time his run to perfection, before outpacing the defence and calmly rounding the ‘keeper to slot home.

I’ve been to Bramall Lane and Hillsborough many times and I visited Don Valley a couple of years ago, but this was really my first “proper visit” to Sheffield. I had an ace time and really liked the city, so much that I’ll be returning sooner rather than later, not just for the retro and record shops but after ticking off the oldest ground, I suppose I’ll have to come back and visit the oldest club as well. 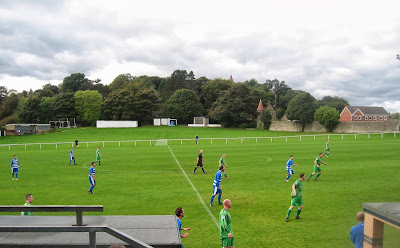 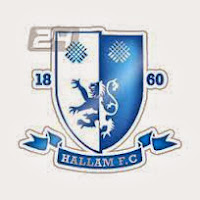 Footnote;
I forgot to mention that I went in the Plough Inn after the match. Nice pint which tasted much better with the Toon and Heed both winning.