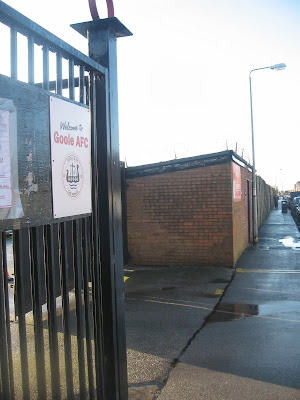 Another beer and football day out on the lash with the lads, with Doncaster our chosen destination for Zippy’s Birthday. My mate’s anniversary of his birth falls on Halloween, but we’re not the sort of blokes to wear fancy dress for the occasion, instead I chose to visit somewhere with a ghostly name, so the destination was obvious...it had to be - ghoul!
I booked our advanced train tickets back in August without knowing which game we were attending. I consulted the fixtures a few weeks ago to find none of the Doncaster based  non-league clubs playing at home, but was more than happy to nip along to the East Riding into Goole for the match.

Goole is a town, civil parish and more importantly an inland port located approximately 45 miles from the North Sea at the confluence of the rivers Don and Ouse. The port is capable of handling a yearly cargo of nearly 3 million tonnes, making it one of the most important docklands on England’s east coast.
The name Goole has its origins in Middle English, deriving from the word goule, meaning "stream, or channel". The town wasn’t recorded in the Domesday Book, but was first mentioned as Gulle in 1362. 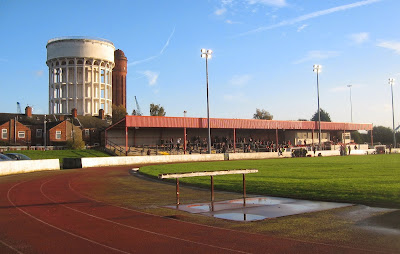 Goole Town FC was formed in 1912 and entered the Midland Football League, playing within the division for three seasons prior to the war and also reached the First Round of the FA Cup in 1914, losing out to Middlesbrough 9–3 at Ayresome Park.
After the war the club returned as Goole Shipyards Football Club and became founding members of the Yorkshire League for the 1920–21 season. After four years the club reverted back to their original name and won the first of three league titles in 1927-28.
In 1948 Goole Town returned to the Midland Football League, where their best performance was a third place finish in 1950-51.
In 1968 the new Northern Premier League was formed and Goole became one of the founder members, finishing 8th in their debut season. They went onto finish a best placed 6th in 1976–77 and in season 1988–89, but they dropped into the Northern Counties East League in 1995-96 and at the end of that season folded due to financial difficulties.

The new club formed as Goole AFC in 1997 and by 2005 had returned to their regular non-league status of the Northern Premier League via the Central Midlands League and NCEL, winning three league titles along the way. The club announced they had changed their name back to Goole Town F.C. in June 2006, but the request was rejected by the West Riding FA. During the 2008-09 season they again faced financial troubles, going into administration and deduced 10 points and an extra point for fielding an ineligible player, but this time The Vikings survived and are currently in the south section of Evostick Division One. 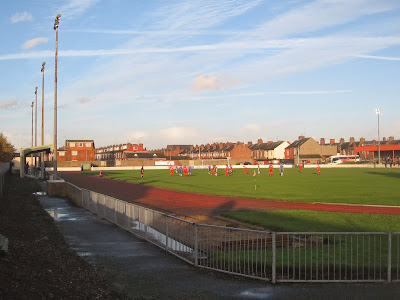 The Victoria Pleasure Grounds has been the football club’s home since their formation but dates back to 1888. The ground had been occasionally used by Yorkshire Cricket Club and in its early days hosted Rugby Union, then in subsequent years; Rugby League, wrestling, heavy horse shows, galas and sports days, which made it the focal point of the town.
The ground has changed dramatically since its heyday, as it once had a popular Spion Kop with the original wooden enclosure taking down in between the wars. The interior shape of the ground altered with terracing replaced when the running track was laid and the second stand was destroyed by a fierce gale in the early ‘90s.

The Main Stand has terracing running towards the dugouts and a mixture of red flip seats and green benches with bum parking spaces for 200. The stand also houses a small press box with the changing rooms and the Viking Bar underneath. Appearing prominently from behind the stand is the town’s most famous landmark - the twin water towers locally known as the salt & pepper pots.
On the opposite side sits a covered terrace on the halfway line and the rest of the ground is open with a pathway running aside the ground’s running track.
There’s four floodlight pylons on each side and VPG has a current capacity of 3,000 with a record gate of 8,700 against Scunthorpe United in the 1949–50 season. The new version of the club took on a Leeds United side in 1999 in front of a club record 976 spectators. 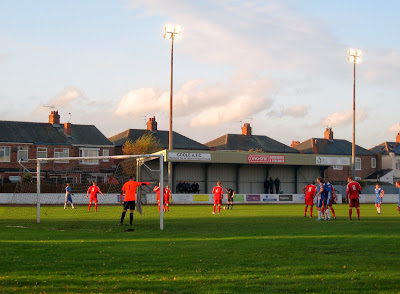 The Vikings came back with a late rally to grab the three points against a hard working Chasetown side. The visitors had taking a 26th minute lead through Nicholas Wellecomme, who latched onto a neat through ball before producing a tidy finish. As the second half progressed Chasetown looked comfortable with their slight advantage but once Johnson-Cole fired his side level on 68 minutes there was only going to be one winner.
In the 75th minute James Cottingham rifled in a powerful effort into the roof of the net and ten minutes from time Ashley Jackson was on hand to net the rebound after an effort came back off the crossbar. After a slow start it turned out to be a decent games and Goole gaffer David Holdsworth will be delighted with his team’s strong finish and hard earned victory. 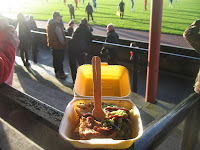 Birthday boy Zippy along with Plymouth Pete and of course your venerable author arrived in Doncaster just before midday. We visited the town’s three JD Wetherspoons pubs and also called into the Railway Inn before catching the 1418 Northern Rail service to Bridlington, alighting at the next stop - the journey to Goole taking about 20 minutes. We enjoyed our visit to the Victoria Pleasure Grounds especially the homemade pie and mushy peas. Just to make it interesting we had a shilling on the side in predicting the score and I was correct with the 3-1 win for the home team, but unfortunately didn’t have any luck with our Golden Goal tickets. Afterwards I got my third new ‘Spoons tick of the day at the town’s City and County pub where we had a few more bevvys and bait(blotting paper...Eddy)
On arriving back in Donny we called at a couple of pubs that I hadn’t previously visited; the Corner Pin and The Plough were both excellent boozers and I’ll make a point of returning on my next visit to Doncaster. We were back in Newcastle at 10pm, the train journey home somewhat spoilt by the presence of a particular unearthly race of people, who had also spent Saturday afternoon in the East Riding of Yorkshire.
Before home time we had a few more pints in the Toon and met up with Jimmy Jimmy and his better half, our Colin Clarke look-alike friend couldn’t make the trip as he went to see John Cooper Clarke(no relation) at the Tyne Theatre. Overall an excellent day, its great to have my mates to accompany me in my favourite hoppy and we’re planning more days out, the lads happy to come along as long as there’s serious drinking involved. 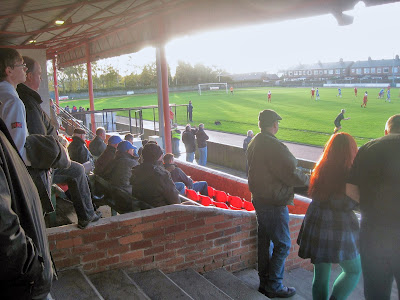 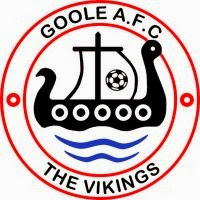 i really enjoyed my recent visit to Goole here my photos http://www.flickr.com/photos/onionbag/sets/72157636471542394/
The pie is delicious and the welcome by all staff is superb.Decent tick.

I remember when Goole Town competed well in the NPL. Was once given a calling card from the Gooligans and under 8s!...lol