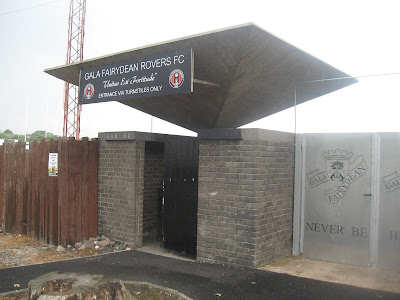 On route to the Vale of Leithen v Edinburgh City fixture last Saturday I stopped off in Galashields to take some photographs of Netherdale, a ground I visited ten years ago.
The stadium has a capacity of around 2,000 and since my initial visit has vastly improved with the stand refurbished, new dugouts and a 3G playing surface.  The 500 seated capacity main stand was opened in 1964 and designed by the renowned British architect Peter Wormsley. The largest stand in this part of Scotland is locally known as “the San Siro of the Borders.” and was recognised in December 2006 with a 'B listing' award by Historic Scotland.

The match I attended in 2003 was a pre-season friendly between a Border Amateurs select side and a Newcastle United eleven. My only recollections of this bright summer evening were;
Revisited(photographs only) on Saturday 7th September 2013
Matchday Stats
Originally visited Thursday 14th August 2003
Ground no.97 Netherdale
Border Amateurs 1(Blacklock 86)
Newcastle United XI 6(Zola 55 Brittain 57,74 Orr 59,88,89)
att.200.apx
Programme £1 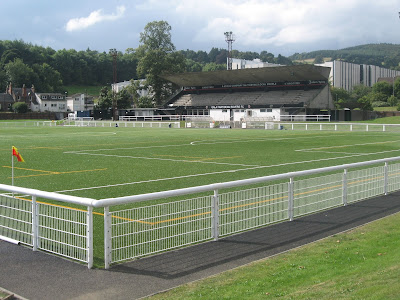