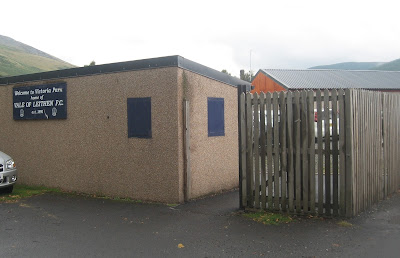 Even though it’s Non-League Day my original plans for this weekend were in the Football League and the long slog down to Newport to re-complete The 92, but yet again the Newport curse struck for a third time and the trip was cancelled.(That’s a story for another day...ie when I finally get there)  I studied the fixtures on Thursday night for an alternative, looking through the FA Vase ties and the various leagues in northern England before deciding to drive in the opposite direction, up to the Scottish borders for my first match in the new Lowland League at Vale of Leithen.

The club play in the Civil Parish and small town of Innerleithen in the county of Peeblesshire in the committee area of Tweeddale. The name "Innerleithen" comes from the Scottish Gaelic meaning "confluence of the Leithen" as it’s  here that the river joins the Tweed. The town forms a T-shape at the top of the valley of Leithen and east-west along the north bank of the Tweed. The town is  surrounded by the scenic setting of  Caerlee Hill, Windy Knowe, Plora Craig, Pirn Craig(know locally as ‘Rocky’) and to the north the highest peak of Lee Pen(502m)

Innerleithen is said to have been founded by St Ronan, an itinerant pilgrim monk who came to the town via the Tweed in a coracle in A.D.737. Legend has it, that he protected the town from the devil  "St. Ronan Cleik't the Deil by the hind leg and banished him" The saint is a major figure in Innerleithen folklore, with streets and landmarks named after him throughout the town. The football club badge features an image of St Ronan in his boat, to portray the sojourn through life. The crest also features the club motto ‘Keep Faith’ (see Matchday Stats) 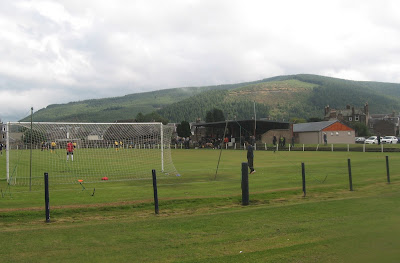 Vale of Leithen are one of the oldest clubs in the Borders, formed in 1891 before becoming full members of the Scottish FA in 1897. They were originally called Leithen Vale (be it for only two games) and played matches at Caddon Park until moving to their current home in 1922.
The club have this year became one of the twelve  founder members of the Lowland football League as part of the reconstruction of the Scottish league system. They were East of Scotland League Champions on four occasions in 1924-21,1977-78,1978-79 and 1986-87 and have added an array of cup honours, having enjoyed the most  success with seven  Kings Cup wins and lifting the Border Cup a dozen times. 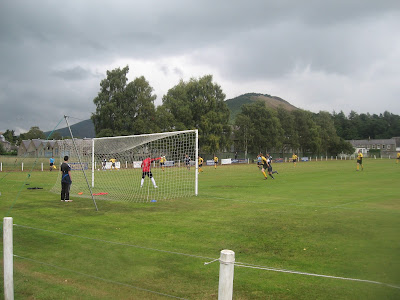 Victoria Park has one covered stand which is three steps of terracing, split by the players tunnel which leads to the pavilion at the rear. The stand has brick walls, with a gravel floor, con-iron roof and steel supports with the team dugouts housed at the front. The structure has a chequered history since it was first built in 1963. The stand  originally had 268 seats until a spate of vandalism in the early 1970s lead to the seats being removed entirely. In 1975 the council ordered that the back wall needed replacing due to safety reasons, but when the wall was half dismantled a gale blew the roof off so it had to be completely removed for scrap. The new roof was put in place in 1987 but the stand remains a standing enclosure, so Victoria Park still has no seating arrangement.
The original pavilion was destroyed in a fire in August 1974, so everything the club owned was lost including the club records and minute books. The new building opened in 1976, financed by the Scottish Sports Council, an SFA grant and a share of Scotland’s 1974 World Cup handout. The building has ample space for changing rooms, committee room, toilets and a kitchen.
The rest of the ground is open but at the far side there’s a couple of cheeky wooden crash barriers facing the halfway line. The record attendance stands at 3,700 for a Scottish Cup tie with Hearts in January 1962. 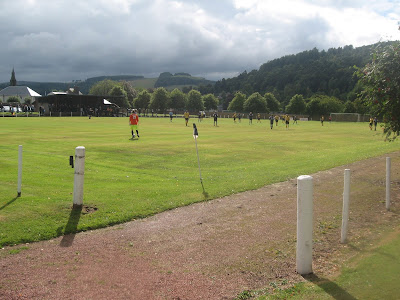 Vale are the early pace setters in the Lowland League debut season, going into this home game with Edinburgh City sitting top of the pile with four wins and two draws. The first half of the match was pretty even, but littered with niggling fouls with the patient referee having to show  four yellow cards before half time. I don’t know what was said at the interval but the hosts were terrible in the second half. The restart began with a torrential rain shower, then once the sun reappeared the Citizens struck twice with Ian McFarland latching onto a through ball to fire home from a tight angle then minutes later Peter Stenhouse doubled their lead with a fine individual effort.
The league leaders chances of maintaining their unbeaten start never looked likely as the visitors comfortably seen out the last 30 minutes and created plenty more chances to add to their tally. Deep into injury time Eddie Mearns reduced the arrears when his header from the edge of the box looped over the keeper to half the deficit, but that was the best they could muster and City easily held onto the three points. 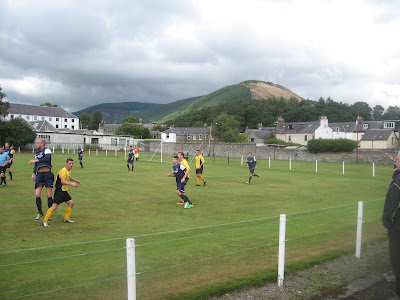 Before I left home I sat in my room and drew up a plan, which entailed - driving up to Galashields to take some snaps of Netherdale for the website and tick off the local Wetherspoons, before heading onward to Innerleithen for the game. Everything went exactly to plan so I  arrived at 215pm, but was somewhat alarmed by the lack of activity at the ground, until I realised I was in the Leithen Rovers AFC car park and Victoria Park was at the bottom end of their pitch. I received a warm welcome from the two auld fellows at the paying entrance, who sought me a pin badge and then when I needed a cuppa before the match, the woman in the refreshment room wouldn’t take a penny for the coffee, milk and two sugars. I don’t like driving too far a distance when I’m alone but the journey home was tops. I was able to tune into Radio Newcastle once I got to Carters Bar so I got all the local non-league scores followed by top music show Beat Surrender, so I enjoyed the drive home so overall a canny day out in the south of Scotland, when I should have been in the south of Wales instead. 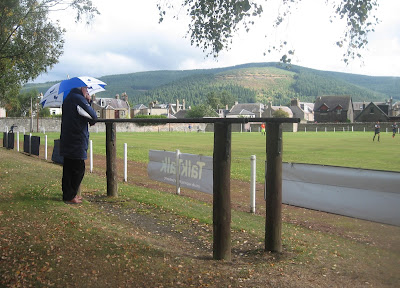 Such a beautiful park Nice Work Dude keep it up Thanks for sharing.
yosemite national park