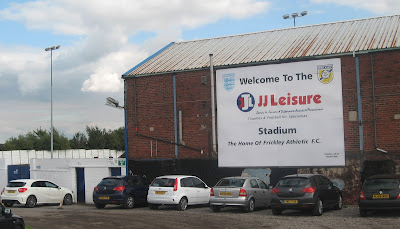 Frickley Athletic is a club I’ve been looking forward to visiting for ages as it’s a destination that throws up a lot of opinions. Throughout the years people have asked me - Have you been to Frickley yet? Off the top of my head I can remember that question being followed by these quotes;

So I took these mixed comments on board before making my own judgement, as I travelled down for Frickley Athletic’s FA Cup First Qualifying Round tie with Yorkshire rivals Sheffield. 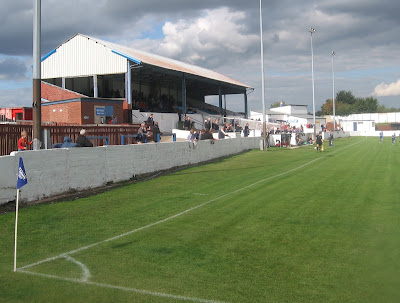 The club play in the small town and civil parish of South Elmsall in the City of Wakefield. The town is close to the southern boundary of West Yorkshire, and just one mile from the Metropolitan Borough of Doncaster with a population of just over 6,000.

The town is most famous for its coal-mining tradition, being the site of one of the largest collieries in the whole country, named after the nearby village of Frickley. The colliery was the scene of major disturbances during the Miners’ Strike between 1984 and ‘85. It was one of the last pits to return to work as it was picketed by a group of hardliners from Kent who continued their demonstration after the NUM called off the strike, with the Frickley miners refusing to cross the picket line. The colliery finally closed on the 26th November 1993 following on from closures of four neighbouring pits which turned this part of Yorkshire into one of the most depressed areas, not just in this country, but in the whole European Union. 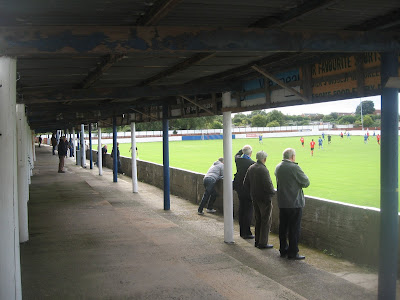 Frickley Colliery F.C. formed in 1910, initially playing in the Sheffield Association League before joining the Yorkshire League in 1922. After finishing league runner-up in their second season they joined the Midland League, playing in the same division until the league disbanded in 1960. The club spent the entire 1960s in the Cheshire County League, the only Yorkshire side to ever play in the competition, until returning to the Midland League in 1970.


Frickley changed their name in 1976, changing the suffix to Athletic as they joined the Northern Premier League. The Blues played at the highest level of Non-League football, spending seven seasons in the Alliance (Football Conference) finishing league runners-up to Enfield in 1985–86, before suffering relegation the following season. They have played in the Northern Premier League Premier Division ever since, finishing second in 2005-06 and the only trophy they’ve ever lifted is the Sheffield & Hallamshire Senior Cup, although they have won it on twelve occasions and are the current holders.

The club’s best performance in the FA Cup was reaching the third round in season 1985–86, beating Hartlepool United away before going out of the competition to Rotherham United 3-1 at home. The Millers also knocked Frickley out of the Cup in the first round back in 1971, but needed a replay after a record attendance of 6,500 witnessed a 2-2 draw against the League club. The Welfare Ground for the benefit of the Colliery workers was laid out in 1925, with the Main Stand built the following year during the miners’ strike. The stand was damaged in February 1991 when a floodlight crashed through the roof after a storm, both being replaced by the end of that year. The stand has 490 blue bench seats, with a separate section of red flip seats for club officials at the front. Access is gained at the front of the stand with a steep staircase from the front terrace which has blue crash barriers. The dugouts are separated by a caged tunnel which leads to the changing rooms underneath the stand. At one side of the stand are the turnstiles, Big Fellas Social Club and at the opposite side there’s Big Fellas Snack Bar.

After the war a terrace was added opposite the stand and during the 1960s the ground was regularly updated with 3,000 miners paying a weekly shilling in welfare towards its maintenance. This additional revenue financed the addition of new terracing and fencing. The far side terrace is called The Frank Hill Stand. The sections of the roof are knitted together, giving shelter between the 18 yard boxes. There’s open hard standing behind each goal with a disabled enclosure next to the club shop on the left hand side. The ground is now known as the JJ Leisure Stadium and has an overall capacity of 2,087.
The club will benefit from a substantial redevelopment plan as part of the Westfield Lane Improvement Area scheme. The £17m regeneration of the former colliery site includes new houses, football pitches for South Elmsall United Juniors and new changing room block and car park for the football club. 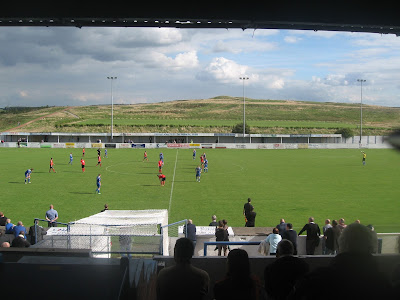 Frickley started the cup tie on the front foot with a Gavin Allott header hitting the post in the fifth minute. Jake Picton soon put them ahead when he picked up a through ball on the right and swept the ball past the keeper from the edge of the box after 12 minutes. The lead was brief as the visitors kicking upwards towards the one man and his drum hit back, when Ben Algar rifled in a shot from 20 yards inside the ‘keepers right hand post. After two quality goals the best of the lot came from Luke Hinsley, he shot the Blues back into the lead with a terrific half volley from outside the box.

The hosts booked their place in the next round with Picton scoring two identical second half goals. He was on hand to net the rebound after the initial shot from Fox was parried into his path on 57 minutes, then he was again on cue when Annerson saved an Allot effort which completed his hat-trick after 78 minutes. The second half wasn’t as one sided as it appeared as Tom Woodhead produced some top draw saves to prevent Sheffield from getting back into the tie. Overall a good game with some great goals, capped off by an outstanding performance from Jake Picton. 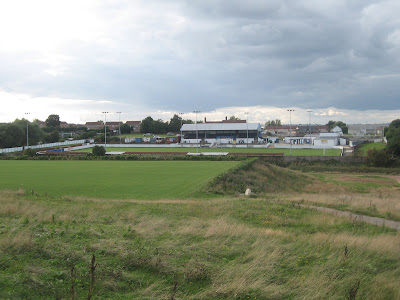 Before this season began I looked into possible grounds which can be easily done within reach of Doncaster Rail Station, as my closest uncharted grounds get further away, now heading out towards west and south Yorkshire. I can do my shift at work and make the 1225 train which arrives in Doncaster at 1350, so for this trip I even had time for a pint before catching the 1426 Leeds train which stops at South Elmsall within 15 minutes. The ground is a ten minute walk from the station so the journey was timed to perfection. It was nice to meet up with Squad #26 Alan Price who had secretly travelled down on a different train. He suggested we walk up the spoil tip to take an aerial view of the ground after the game and it’s from this viewpoint that you can see what a cracking little ground Westfield Lane is.

At the top of this post I stated previous visitors thoughts on this club and now that I’ve ticked the ground off I can now form my own opinion, so next time I’m asked “Have you done Frickley yet?” I can reply with “Aye, I have and it’s a classic non-league ground that you must visit” 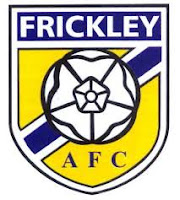 Know know what everyone means about this being something of a Marmite of a ground. Frankly frightening - but somehow earthily appealing with it providing your car still has its wheels when you come to go home!