Around The Alliance - part eight 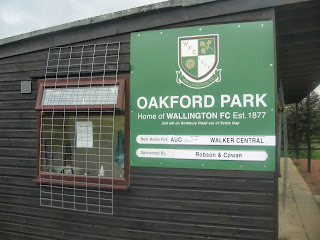 Wallington FC was first established in 1877, making their competitive bow in the Border League in the 1890s and winning their first trophy in 1901. They joined the Coquetdale League after the Second World War and were fairly successful in the 1960s, which lead to progression to the Northern Alliance in 1965. The club left the league in 1982 but rejoined in 1995, winning the Second Division in 2001-02 and last season the First Division title. 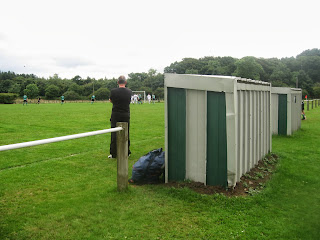 Wallington are based in Scots’ Gap which is located 11 miles west of Morpeth in Northumberland. I travelled to the match in my car up the A696, but I can imagine this ground would be a bugger to get to on public transport. The ground is hidden in the corner of a small residential street call Oakford, the park tucked in the far corner behind the garages.
The club facilities and changing rooms are found at the entrance with car parking allowed off the near side of the pitch. The dugouts are also on this side and the ground is enclosed by hedges and foliage on two sides. 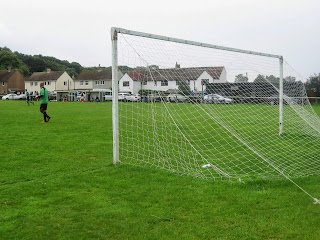 Wallington hosted Walker Central, suffering a narrow defeat after gifting their opponents an early goal and conceding a late winner. Ben Fenwick was the unfortunate defender whose attempted volleyed clearance ended up going in the opposite direction and over the despairing ‘keeper’s head to gave Walker an early lead. Josh Gilmartin equalised just before the half hour mark, managing to stay onside before producing a good finish, firing inside the far post. 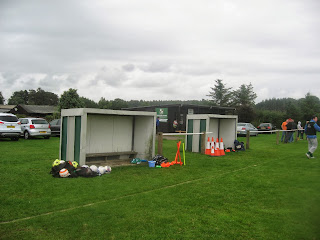 The home side wasted some good chances, especially the big number nine up front, who should have giving his team a comfortable lead, missing good opportunities each side of half time. The second 45 didn’t live up to the entertainment of the first period and a draw looked on the cards until the closing stages, when a great move and interchange of passes cumulated in Phil McCoy fired home from the edge of the box to bag the points for Walker. 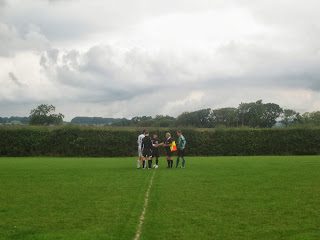 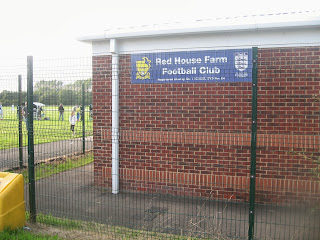 Red House Farm FC was formed in 1990 as a junior club, quickly developing 2 teams into local leagues for the 1991-92 season. They’ve established themselves as one of the top clubs in the area with over 300 players playing between the ages of 6 and 19. The senior side joined the Northern Alliance in 2010-11, finishing Second Division runners-up the following season and achieved back-to-back promotions when finishing in second place behind Wallington last term. 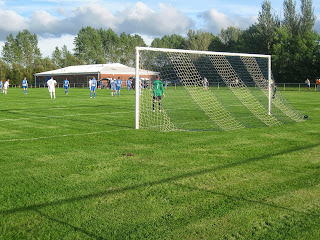 The junior sides used Regent Farm school, Broadway West Playing Fields and in 2003 moved just next door to Kingston Park Road, located in between Gosforth High Street and Kingston Park.
The ground has benefited from major investment, with the local authority supplying funds for the installation of sand based drainage system into the pitches. After gaining planning permission the club successfully gained a grant from the Football Foundation and the Arts & Trust Council to enable the the building of the clubhouse and changing room block. The work commenced in June 2007 and opened in January the following year. The total cost of the building and pitch work was £612,000 and as part of the grant application the club have gained Charitable Status and FA Charter Standard Status.
The ground is fenced off from the other pitches with a pair of perspex dugouts in a blue frame, furnished with matching blue school desk seats. 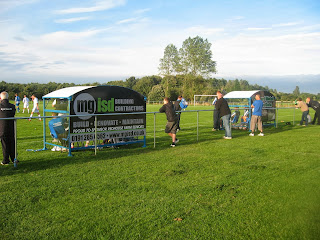 Just as the match was about to kick-off I saw some familiar faces. I noticed the referee was the same official as last Saturday’s attended game at Wallington (I spoke to him at half-time and told him I wasn’t stalking him) and also Squad #138 Lee Stewart and future 100FgC ‘A’ listed Katie Wallace turned up just in the nick of time, after getting lost on route travelling up from County Durham on public transport. 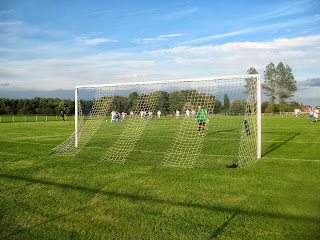 Red House Farm got off to a great start against Blyth Town taking a sixth minute lead when a direct free kick from the edge of the box was well saved, only for to ball to fall kindly to Brady to net the rebound. The lead only lasted five minutes as Morien was on hand to fire home, after a wayward shot fell into his path to draw Town level. Soulsby regained the advantage when he fired in from close range after 33 minutes, only for the half to finish all square when a right wing cross was deflected past the ‘keeper for an OG on the stroke of half time.
In similar fashion to my previous Northern Alliance fixture the second half wasn’t as good but again the match was decided with a late goal, when Sheeran was on hand to convert a right wing cross to claim all three points for Red House Farm. 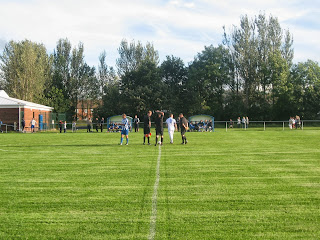 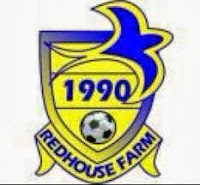 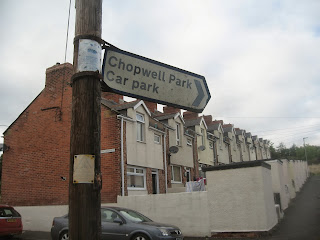 Chopwell is a village on the edge of the county of Tyne and Wear and the metropolitan borough of Gateshead and before 1974 was part of the administrative County of Durham. Chopwell Colliery was first sank in 1781 and closed in November 1966, employing over 2,000 people at its peak. The village is locally known as “Little Moscow” because of its historical strong support for the Communist Party. During the 1926 General Strike the Union Jack flag was replaced with the hammer and sickle of The Red Banner at the council offices and the village still has streets named after both Marx and Lenin. 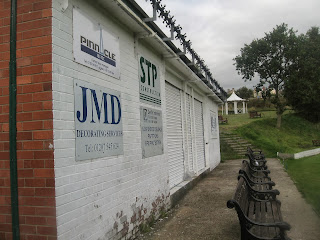 Chopwell Top Club originally appeared in the Northern Alliance in 1999 winning two promotions to reach the Premier Division in 2003. The club were relegated the following season and in 2007 changed their name to Chopwell Officials Club. The 2010-11 was a difficult season in the Alliance with Chopwell one of four clubs resigning from the league mid season, having their league record expunged. Last season the club remerged as plain Chopwell FC playing in the Tyneside Amateur League and were accepted back into the fold this season. 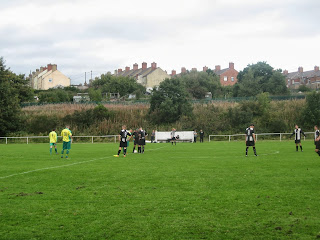 I was pleased to see Chopwell return to the Northern Alliance as it gave me a chance to revisit the village for the first time since 1982. Back in my painter & decorating days,* one of my first jobs was painting the interior of the local community centre, taking the long trek up to Chopwell on the X42 bus from the old Marlborough Station in Newcastle.
On my arrival I had a quick look around and not much has changed. The community centre is still there in the main street but it was disappointing to see ‘The Chopwell’ pub closed down and boarded up. The football ground is found at the end of the aforementioned Communist named terraces, at the top of Chopwell Park, which provides panoramic views across to Consett. The park also has a bowling green and a cricket pitch, the pavilion used as changing rooms for the footballers. The ground is fully fenced off with a brick uncovered dugout at each side and is enclosed by the nearby Chopwell Woods.
(*This is my actual trade. Available for work. Good rates) 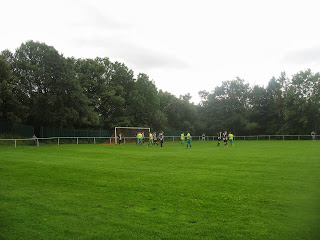 The second division cup tie with High Howdon turned out to be a cracker, but as we approached the interval with the game still goalless little did we know what was in store. The visitors  finished the first half strongly but it was the hosts who took the lead on the stroke of half time,  when a right wing cross was nodded back into the path of John Meadows who had plenty of time to round the ‘keeper and run the ball into the empty net.  Derek Waters doubled their lead from the penalty spot on 54 minutes, but Howdon hit back almost immediately through Nick Mcdonald. The two goal cushion was restored ten minutes later when Ryan Lowes got on the end of a left wing cross to fire home from six yards and with their opponents reduced to ten men after Black’s second yellow card it looked game over.

The ten men finished the game strongly with Jason Walsh running onto a through ball to fire a first time shot into the far corner on 81 minutes, then a cracking shot from the edge of the box from Nick Mallen with four minutes remaining sent the game into extra-time.
With the team dugouts being on opposite sides of the pitch I had to wander between the two to find out the goalscorers names. When I enquired about who was sent off, one of the Howdon players turned and said “It’s f**king me!” before he confessed his name.
High Howdon took the lead for the first time in the tie through substitute Ryan Errington, who beat the offside trap to run through and score just before the end of the first period of extra-time. Two minutes after the turn around Waters scored his second penalty of the game and just as it was looking like we were in for more spot kicks, substitute Stuart Rook latched onto a through ball to fire home his left foot shot to book Chopwell a place in the next round. 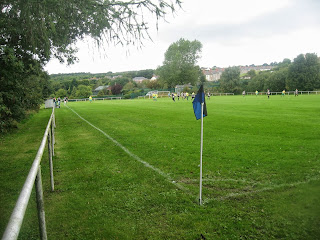 I met a fellow groundhopper called Brian at the game, a big Northern Alliance fan from Middlesbrough, who is also into Welsh football and supports Plymouth Argyle. Everyone on the Chopwell bench made us welcome and after the game we were invited into the clubhouse for a bite to eat, which we unfortunately had to decline as I was going out on Saturday night and Brian had to catch his first of two buses back to Boro. A fantastic game and overall a great afternoon in Chopwell, so good that I’ll make sure that it won’t be three decades before my next return. 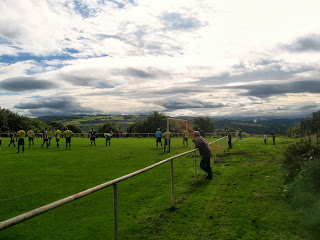 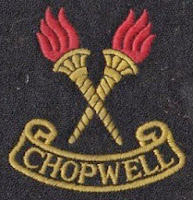